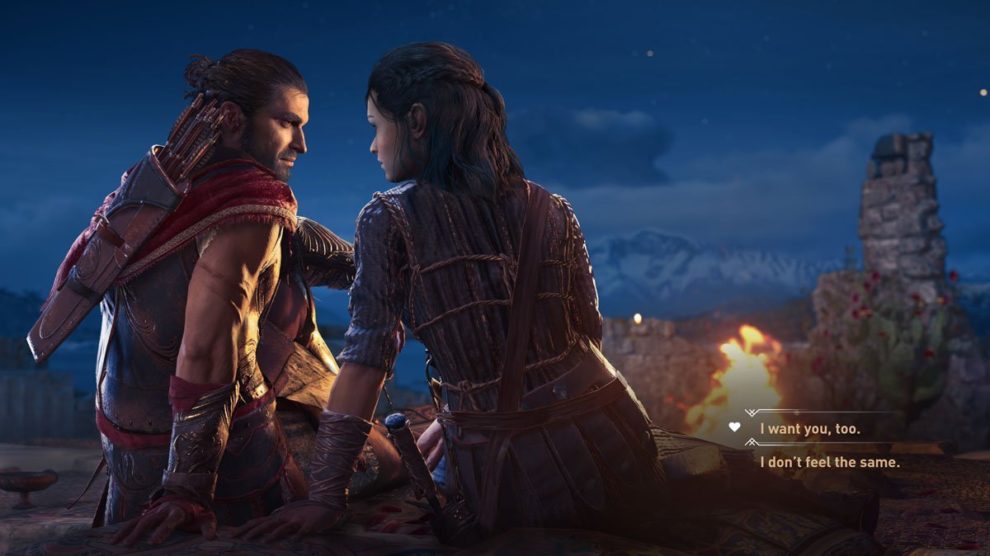 Assassin’s Creed Odyssey has made the transition to a full-fledged RPG, and with that comes the ability to sleep with a bunch of people.

A BUNCH OF PEOPLE, you guys.

We thought we’d break it all down, mostly spoiler-free mind you, so you can think about how you’ll plan your conquests (or lack thereof; we’re not judging).

First off, we confirmed back at E3 2018 that Alexios and Kassandra can swing however they’d like, be it as a heterosexual, homosexual, bisexual or asexual/celibate. That remains true today. If you see a heart icon beside a dialogue option with a character, that’s your tell that you can romance him or her. Select that dialogue option and away you go!

Second, romancing comes through dialog options and you do have second-chance functionality that essentially makes you confirm the romance before it actually happens. You can’t accidentally sleep with someone.

That’s it, really — apart from this one last spoiler-filled tidbit that you may want to avoid. It’s below.

Still here? Good! Romancing is pretty tame compared to the likes of Mass Effect — after initiating a romance, you’ll see a kiss before the game fades to black. Sorry, pervs.