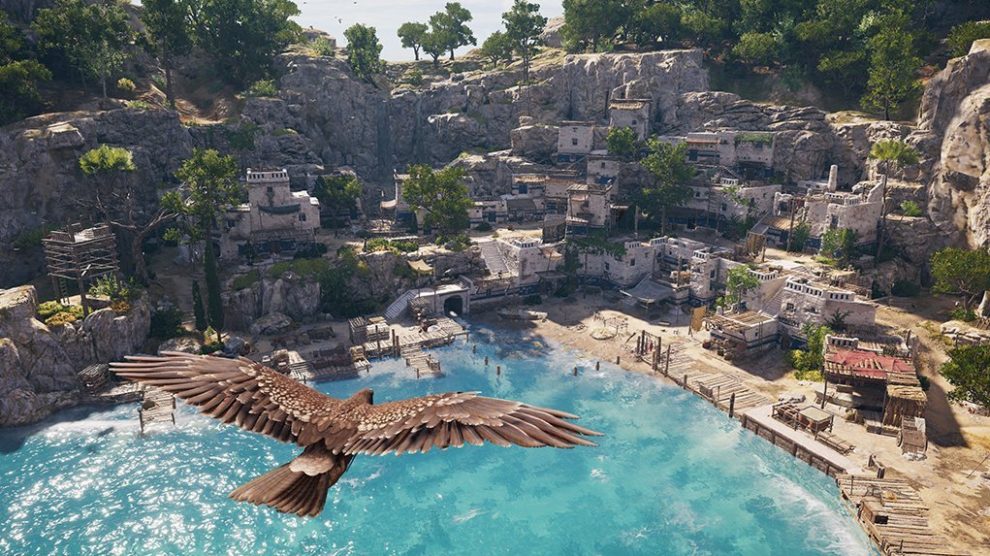 Over the years, Assassin’s Creed has been a series beset by highs and lows, an ever-evolving set of mechanics and a metastory that rivals the complexity of most JRPGs. After a conscious decision to go a year without a major release – after nine years of annual outings in the Animus – Origins came along to redefine the very core of the franchise, both narratively and mechanically. Pivoting to a more RPG-esque mindset, Origins brought us to an open-world Ancient Egypt filled with levelled enemies, tombs to investigate and a new angle on the First Civilisation story (now known as the Isu — when did that happen?). We saw the origin – get it? – of the Assassins and set the stage for a new era of the franchise revolving around Layla Hassan, a former Abstergo tech now working with the Assassins.

This year, Assassin’s Creed: Odyssey brings us to Ancient Greece in the midst of the Peloponnesian War, as Athens and Sparta throw down for control of the Greek world. You assume the role of one of two Spartan children – Kassandra or Alexios, the series’ first true choice between a male and female playable character. Grandchild of the famous Spartan Leonidas, you are in possession of his broken spear, a weapon said to have untold power hidden within it. After a tragic event in their childhood, your character grows up away from their family and Sparta on the island of Kephallonia, working as a mercenary to get by. When the opportunity arises however, you set out into the greater Greek world to seek fame, fortune, and a life to call your own.

Narratively, Odyssey breaks tradition for the series, subdividing your story into three main plotlines over the course of the game. The primary questline revolves around seeking out your family to reunite with them after being separated in your youth. Additionally, two other plots are introduced over the course of the game – the Cult of Kosmos, the game’s version of the Templars, who must be uncovered and eliminated, and a third plotline that relates to the First Civilisation, as Ubisoft brought this vein more to the fore in Odyssey. 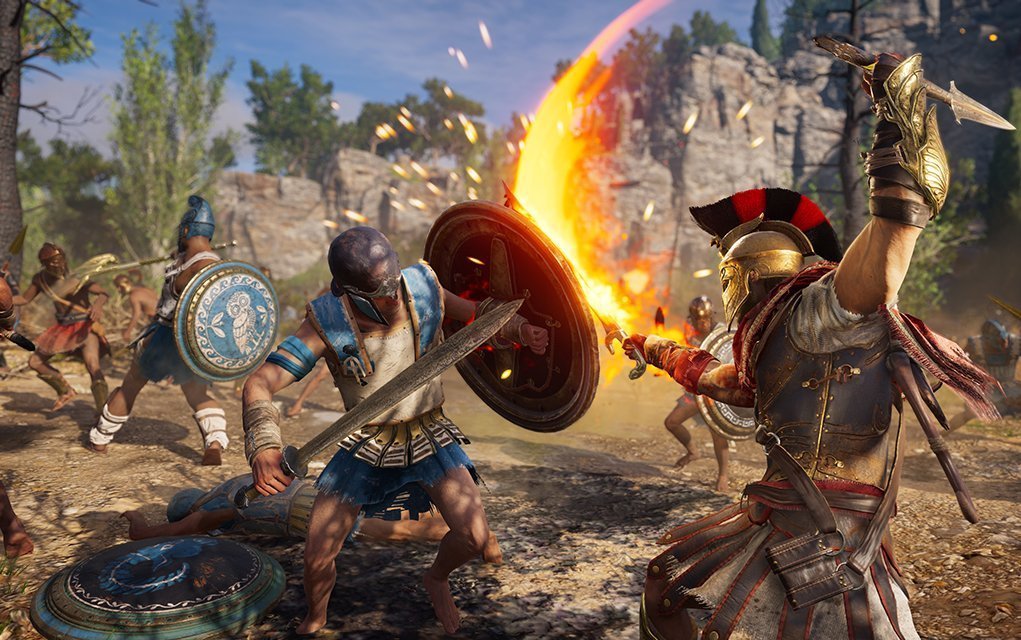 While the family story is fairly straightforward, the Cult of Kosmos plotline is actually my favourite evolution of the gameplay in Odyssey. Each cultist’s identity must be uncovered before they can be eliminated, and they are scattered through all the game’s areas and gameplay mechanics in a very clever way. While some cultists are exposed and eliminated as part of the main plotline, not all are involved. Each time you eliminate a member, they are likely to have some form of clue on them that points you in the direction of another. This could be a specific location or region, knowledge that they’re a leader of a state, that they sail in a certain area, or can only be encountered in one of the game’s Conquest missions between Sparta and Athens.

More cultists are threaded through sidequests and side activities, both in areas you’ll encounter in the main quest and others you wouldn’t pass through for the family story. It’s a great way to encourage exploration and investigation of the game’s impressively scaled map, and brings a sense of achievement when you sleuth out the identity of one of your foes.

This ethos carries through to another new introduction for Odyssey: Exploration Mode. At the beginning of the game you’re offered the choice between Guided Mode, which follows the traditional model of offering waypoints in your quests. Exploration simply gives you clues as to where to go next without providing a concrete map marker. Typically you’ll be offered two or three hints in the mission’s description to send you the right way, but it’s up to you to figure out where exactly you’re headed. I started the game with this mode, and the sense of satisfaction I got from figuring out my destination was great… for a few hours at least, while I was on the ‘starter island’ of the game. 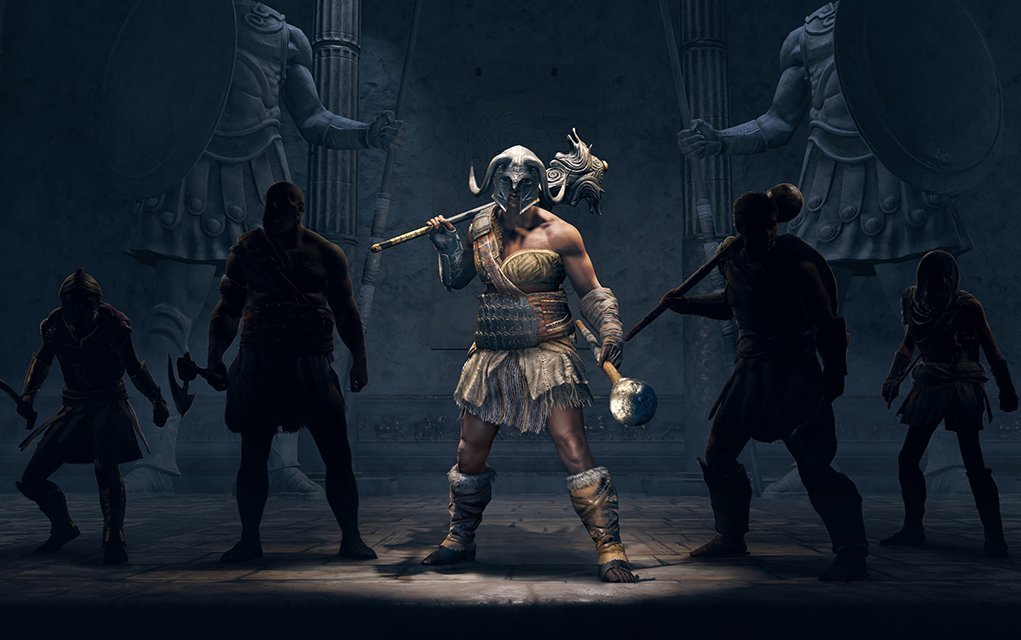 While this Exploration Mode would certainly encourage you to explore a lot more, in the name of efficiency (and getting through enough of this game to review it) I quickly returned to Guided Mode for the remainder of the game. If you’re happy to make your way through Odyssey at your own pace it’s a great addition, but given the sheer scale of the map it’s not for me… especially when your horse’s AI seems to have gotten dumber since Origins. Why is it so hard to reach me, Phobos? Half the time I reach my destination before you reach me, buddy. What’s up with that?

Now, it wouldn’t be a TRUE Assassin’s Creed game without a couple of new mechanics in the mix, and Odyssey continues the tradition. Rather than a simple detection system for illegal actions, this title introduces a Grand Theft Auto­-esque bounty system. Get caught doing illegal acts like murder, theft, or destroying property and your bounty will build up over time. Depending on the level of criminal activities, high enough bounties will trigger other mercenaries to come after you. These are tough combatants who will hunt you down day or night, no matter where you are, ranked on a tier system all the way up to a legendary Tier 1 merc, giving you the chance to take them down one by one until you can become the ultimate sellsword in Greece. While these enemies do add spice early in the game, and taking them down is both satisfying and rewards decent gear, it gets tired over time just like Exploration Mode. Once money stopped being a precious resource for my playthrough, I’d usually end up paying off my own bounty rather than facing these enemies in the middle of a fort infiltration or just while trying to get from A to B… or tearing out my hair when a couple high-levelled bosses decide to interrupt my normal play.

The game also adds the Conquest system mentioned earlier – with all of Greece pitched in the battle between Athens and Sparta, you have the opportunity to weaken each region and trigger a battle between the two sides. As a mercenary you can choose to side with either the defending or invading army in each case, at your own discretion – in either case, you’ll enter a massive melee where you’re tasked to take down enemy combatants and ranking members of the army to ensure your side’s victory. While fun, the action needed to trigger these conquest battles means they’re few and far between – so if you do enjoy them, you can’t just binge. I’m curious to see if tipping every region in Greece to one side or the other has an effect or trophy associated with it, but it honestly seems like a lot of work! 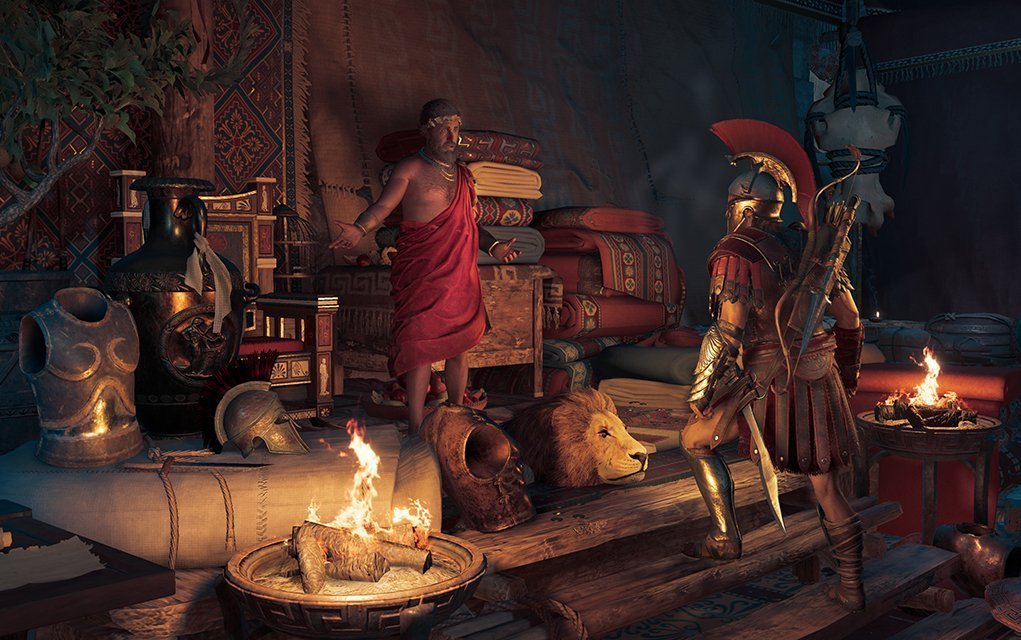 And sometimes, that is what the game’s main quest feels like: work. While I obviously examine games for a living, the underlying framework became a little too obvious at times. For every major task you need to accomplish in your journey, there are inevitably sub-tasks you’ll have to do first. “Oh, we need to kill X. But before you can kill X, you need to go do Y and Z for some reason.” Of course your set-piece missions need to be spaced out, but at times it was a little too obvious that this is what’s happening. This lack of subtlety is a common thing I noticed in other areas too. Mythical creature battles such as the Medusa fight detailed in early footage are fun, and it’s nice to see them woven into the world moreso than Origins’ god battles being described as “Animus glitches.” Still, their inclusion does raise questions.

If there’s a giant temple to Medusa in very non-Greek architecture sitting out in the open on an island that survived thousands of years, how is it not there in the modern day? I’m all for bringing this content into the series for some variety, but it does strain the ‘real-world history’ aesthetic of the series. Likewise, I appreciate that the world isn’t full of conveniently shaped structures that just HAPPEN to be fast-travel viewpoints, but do they all have to be out in the middle of nowhere? I’ve hiked back from the same Temple of Apollo statue enough times to make it annoying. Just make the ship docks fast travel points, Ubi. Please.

While this review may sound somewhat negative, I honestly enjoyed my time with Assassin’s Creed: Odyssey. It adds new elements to the franchise’s recipe that I enjoy, and some of the story beats look to be leading future instalments in a really interesting direction. That said, I’ve been playing this series for long enough that detailing assassinations, stealth mechanics and historical figures is kind of unneeded. While some of the new content is a little hit-and-miss, the journey overall is a fun time – and with so much to do in and out of the main story, you can easily set aside the parts you don’t fall in love with and still be left with a VERY meaty game. With DLC content both paid and free set to drop consistently over the next few months, this is a strong indication that the Assassin’s Creed series isn’t going anywhere.

Assassin’s Creed Odyssey was reviewed using a promotional code on PS4, as provided by the publisher. Click here to learn more about Stevivor’s scoring scale.