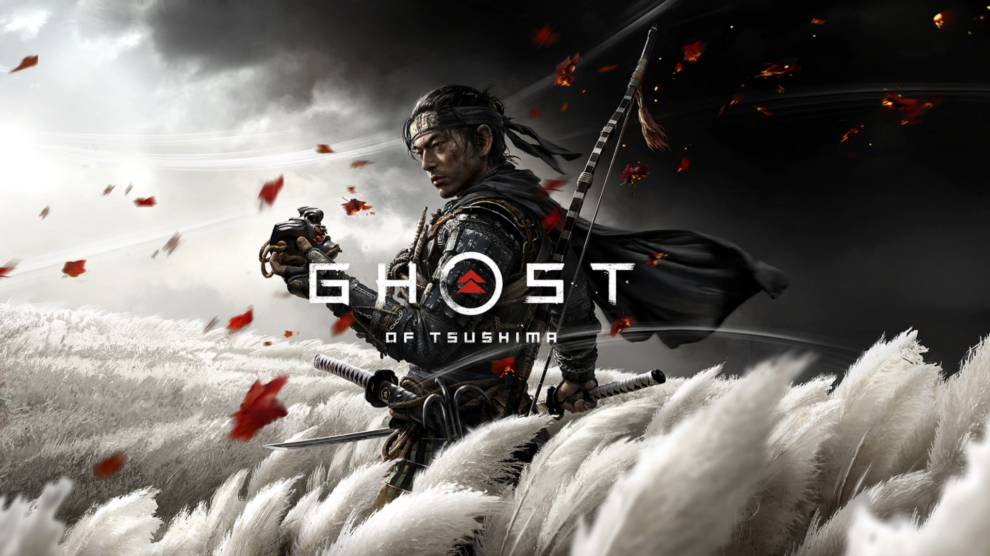 Ghost of Tsushima is the latest venture from Sucker Punch Productions, the developer of iconic PlayStation classics Sly Cooper and Infamous. A departure from its previous titles, it has been marketed as a Souls-like in a series of hype-filled but information-sparse events. It’s far from that; in fact, it’s more accurately the Assassin’s Creed samurai game that Ubisoft fans have spent years clamoring for. While it has brilliant moments of beauty, conflict and gameplay, it can be best summarised as a faithful recreation of an Assassin’s Creed title circa 2014 with all the good and bad associated with that.

Set on Japan’s Tsushima (toosh-ima) Island in the late 13th century, you play as Jin Sakai, a samurai warrior trained by his uncle and ruler of the land, Lord Shimura. Ghost of Tsushima’s story begins at the onset of an invasion by the Mongol Empire; here, Shimura is captured and most of the samurai have been killed. Despite an emphasis on samurai culture, Ghost is about just that: forever in the shadow of a great samurai, Jin happily accepts the moniker of the the Ghost, one who ignores the samurai code in an effort to free his uncle and liberate the island at any cost. While this is supposed to be some sort of struggle for the lead character, Jin sheds his samurai skin with little pause, and in combat will happily strike at the backs of opponents even though that’s supposed to be a no-no.

It’s hard not to try to describe things without likening events to any number of Ubisoft titles. Chief among those comparisons is the in-game map, one full to the brim with quest and sub-quest icons, each wanting to distract you. The main story is spread out over three main acts that total 20-25 hours of gameplay; though, you will easily double that by liberating camps, finding shrines connected with fox dens, composing haikus and engaging in the other various side activities. 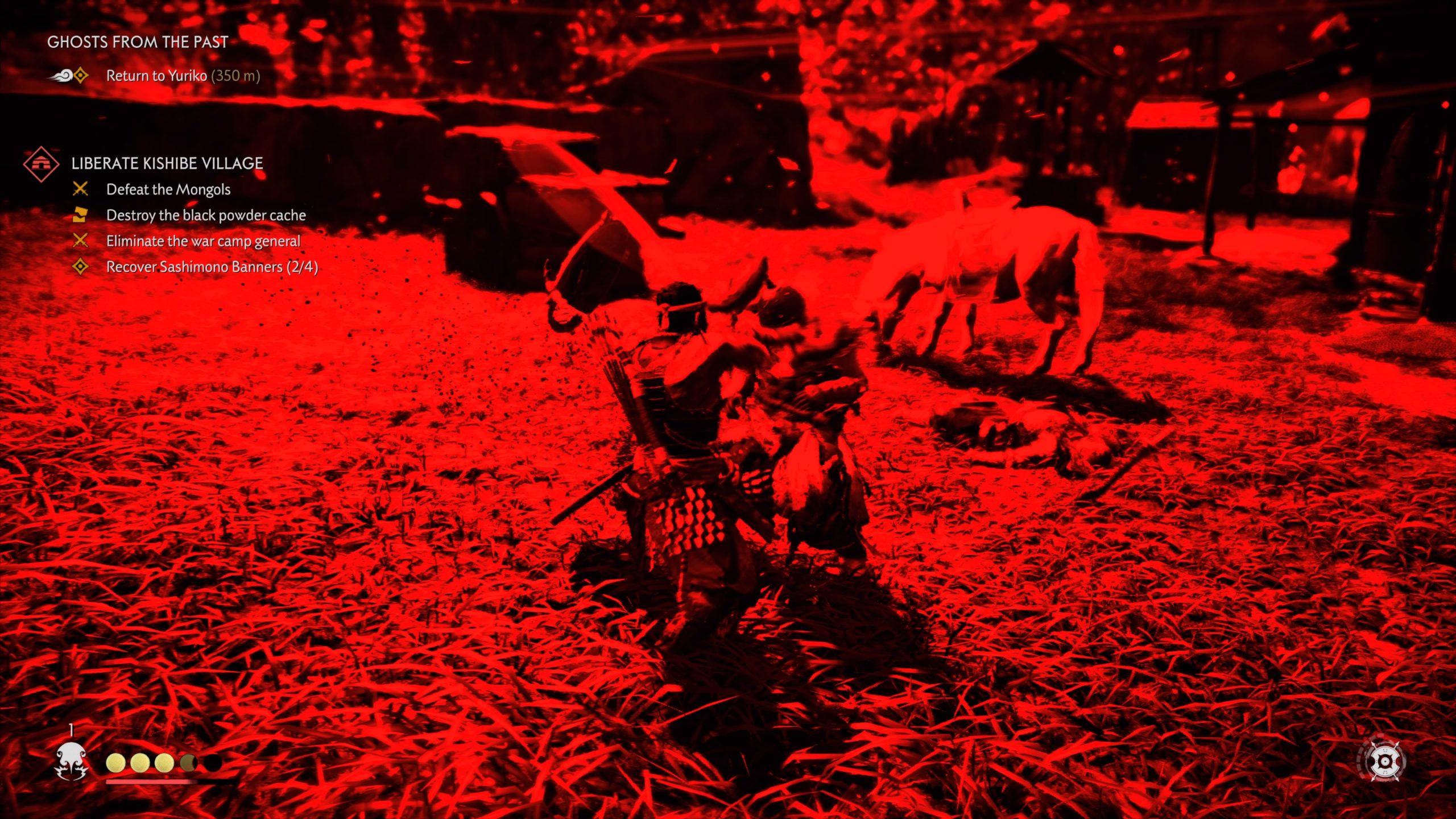 We are in the middle of months of E3 2020 replacement livestreams, so my time was precious; I attacked the main questline as if the lives of the residents of Tsushima depended on it (I’m a thoughtful ruler’s nephew, after all). Admittedly, this wasn’t desirable, but this tact really drove a number of points home. First, all the cool, samurai-esque stuff comes pretty late in the game; most notably the incredibly neat Kurosawa-inspired Ghost mode that flips things into black and white, punctuated by a red filter as you easily dispose of enemies. If you want to live the samurai fantasy, that alone does it. A range of tools including a grappling hook and several samurai stances also unlock late in the main mission-only game, which is unfortunate because it adds variety that’s sorely lacking otherwise.

Combat is a mixed bag, way too easy in some respects and far too cheap in others. When all four combat stances are unlocked, things become a rock, paper, scissors affair: identify your enemy (either a swordsman, shield bearer, spear carrier or heavy), then pick the stance that beats it and wail on the Triangle button. While opponents can frequently break out of animations, flipping 180 degrees at the same time they bring their sword down to somehow strike you, the real enemy with combat is the camera. It’s a completely broken affair that swings wildly at times and becomes obscured by the smallest object. On easier difficulties, an auto-lock isn’t fully available, but exists nonetheless, randomly switching between opponents as the camera struggles to keep track of you. That would almost be forgiven, if not for the need to match your stance to your opponent. 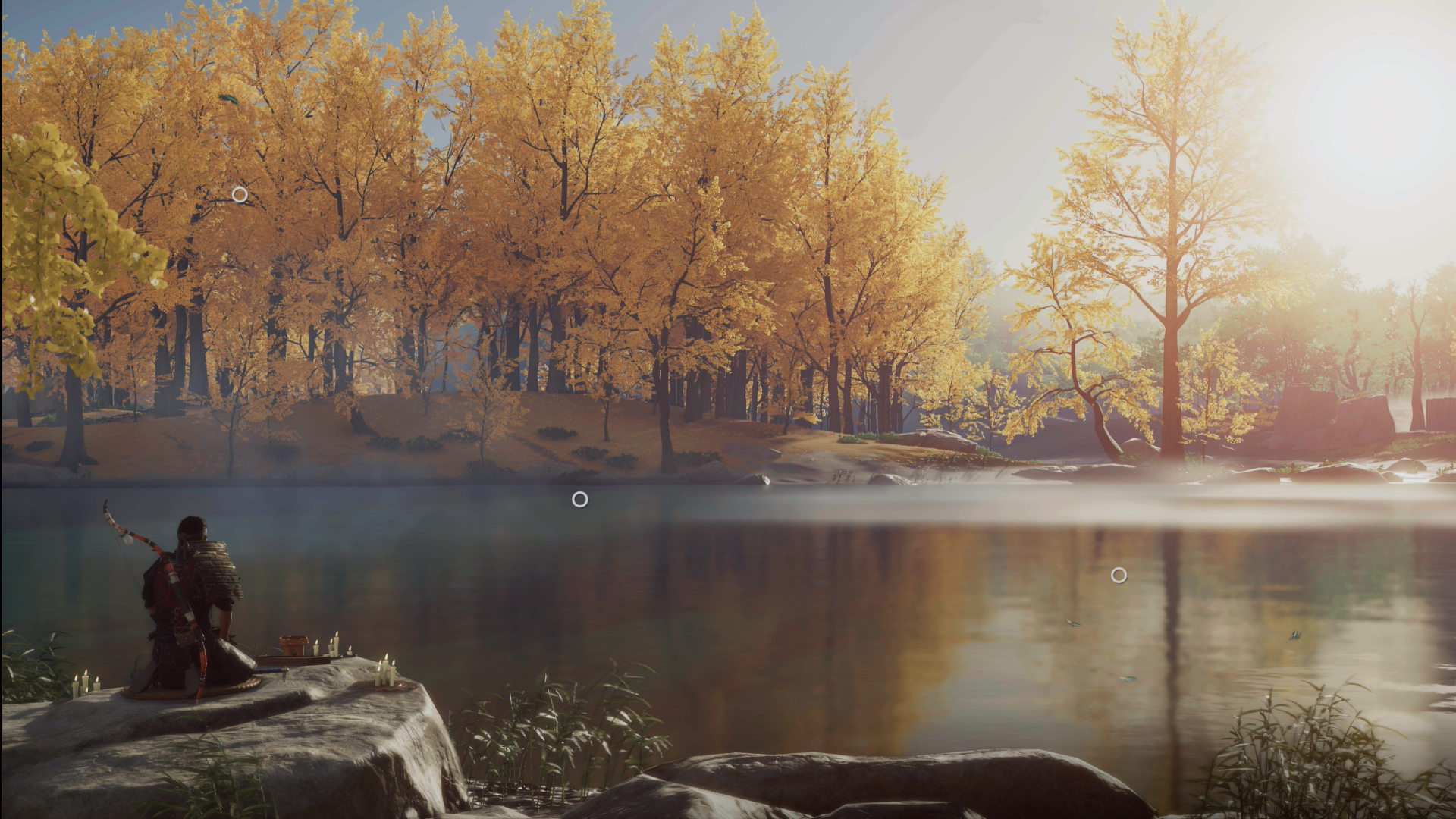 That’s not to say that combat isn’t broken in other areas — in a giant siege area, you can easily bait some enemies into following you across structures like bridges. At a certain point, they will automatically turn around to head back to ‘their’ combat area so you can fire arrows at their backs as they run. Boss fights are the same as general combat, providing a rush of adrenaline at the same time they will frustrate. All the same issues remain in said spectacles, though stances mean nothing. They seem more luck- than skill-based.

The ability to, say, click the right thumbstick to actually lock-on to your desired target would have improved matters tenfold. This here is the start of the gripes I have with Sucker Punch seemingly copying and pasting the ol’ Assassin’s Creed playbook without taking advancements made in Origins and Odyssey. You can’t skip dialogue at any time; even after finding multiple fox dens ahead of the moment, Sucker Punch decided I needed to learn about them. I had to sit through an explanation I already had figured out myself.

Most quests are full of exposition-laden “walk with” or “ride with” instances, and you’ll constantly be met with stiff NPCs that need to run to a specific position after a battle so you can then press R2 to speak with them. There are a million “follow NPC” missions where you’ll need to trail for a short bit, then hide as your target stops and looks back. Worst of all is a random floating jump animation that you’ll constantly experience when you jump at a wall you’re not supposed to. A group of several people on horses will dismount from their steeds in the exact same time, using the exact same animation; that’s likely the freakiest bit of Tsushima. 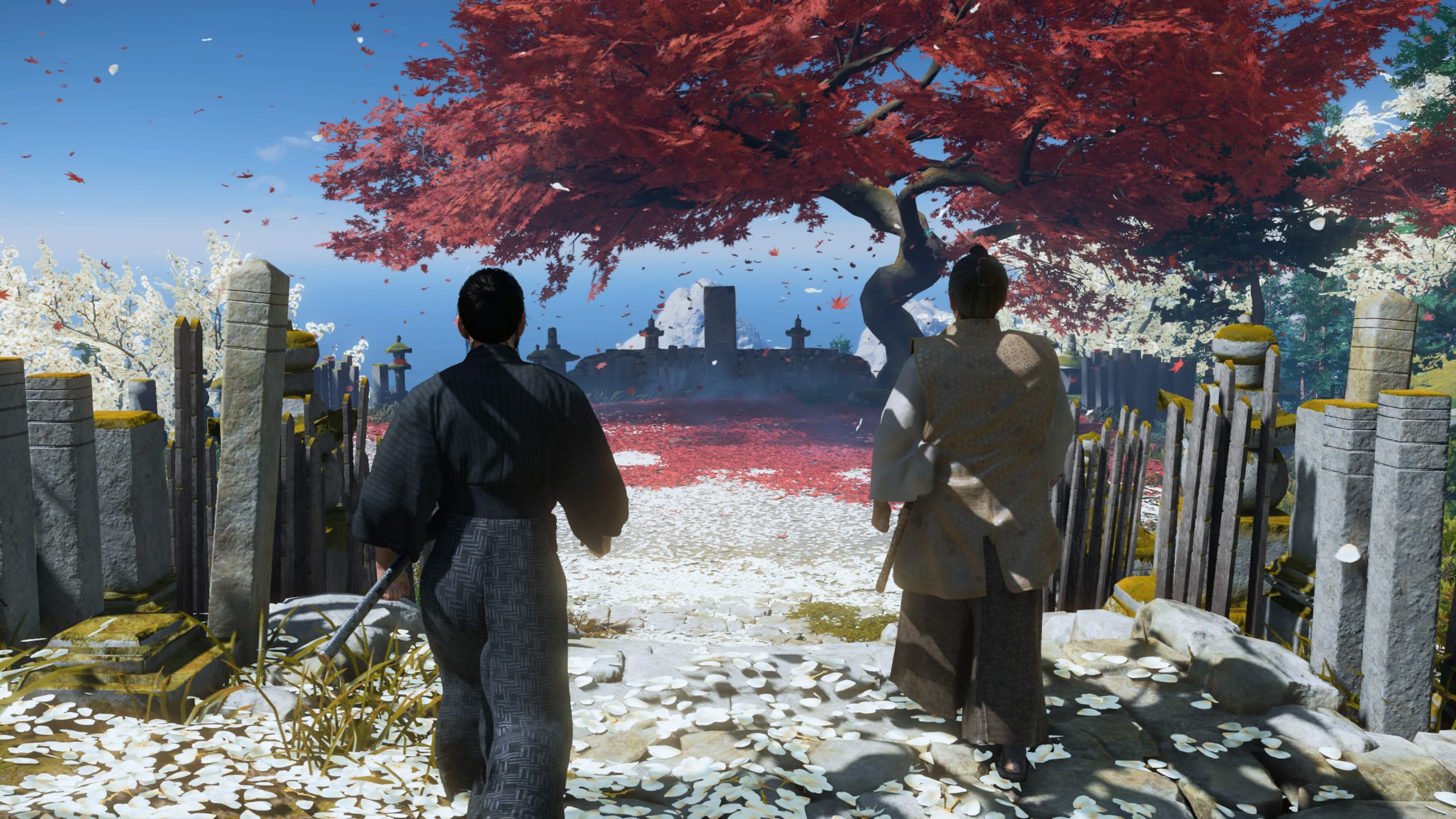 There’s no denying that Tsushima is absolutely gorgeous — arguably the best-looking PS4 game we’ll see in its lifespan — though like Jin, this comes with an identity crisis. The idea of wind to act as a quest marker is a good one, but it doesn’t work 100% of the time. It usually breaks the photo realism of the incredibly beautiful Japan, and sometimes doesn’t work at all; when you’re in a hilly area, the system breaks, instead whipping (apparently) beneath textures, leaving you clueless as to the direction you’re supposed to go. Other times, the wind is accompanied by a game-like marker, though it’s inconsistent, leaving you confused as to what’s next and unsure of whether or not you’re supposed to look for an orange diamond or swipe the DualShock’s touchpad. The same is true for various vendors inside large villages; you know you’ve got upgrades to cash in with various people, but their locations are anyone’s guess.

I’m all about the negatives with a new IP, but like Horizon Zero Dawn, Ghost of Tsushima has a lot of potential in subsequent sequels now that Sucker Punch will have time to evaluate what went right and wrong. It’s truly ambitious, trying a lot of things – none original – in an effort to make some stick. The aforementioned Kurosawa stuff is spot on, as is the ability to go samurai-style with a traditional standoff (though that’s marred by camera issues too – it’s hard to tell when to strike a secondary enemy if the camera is blocking it by the slow-mo corpse of someone you’ve already felled). 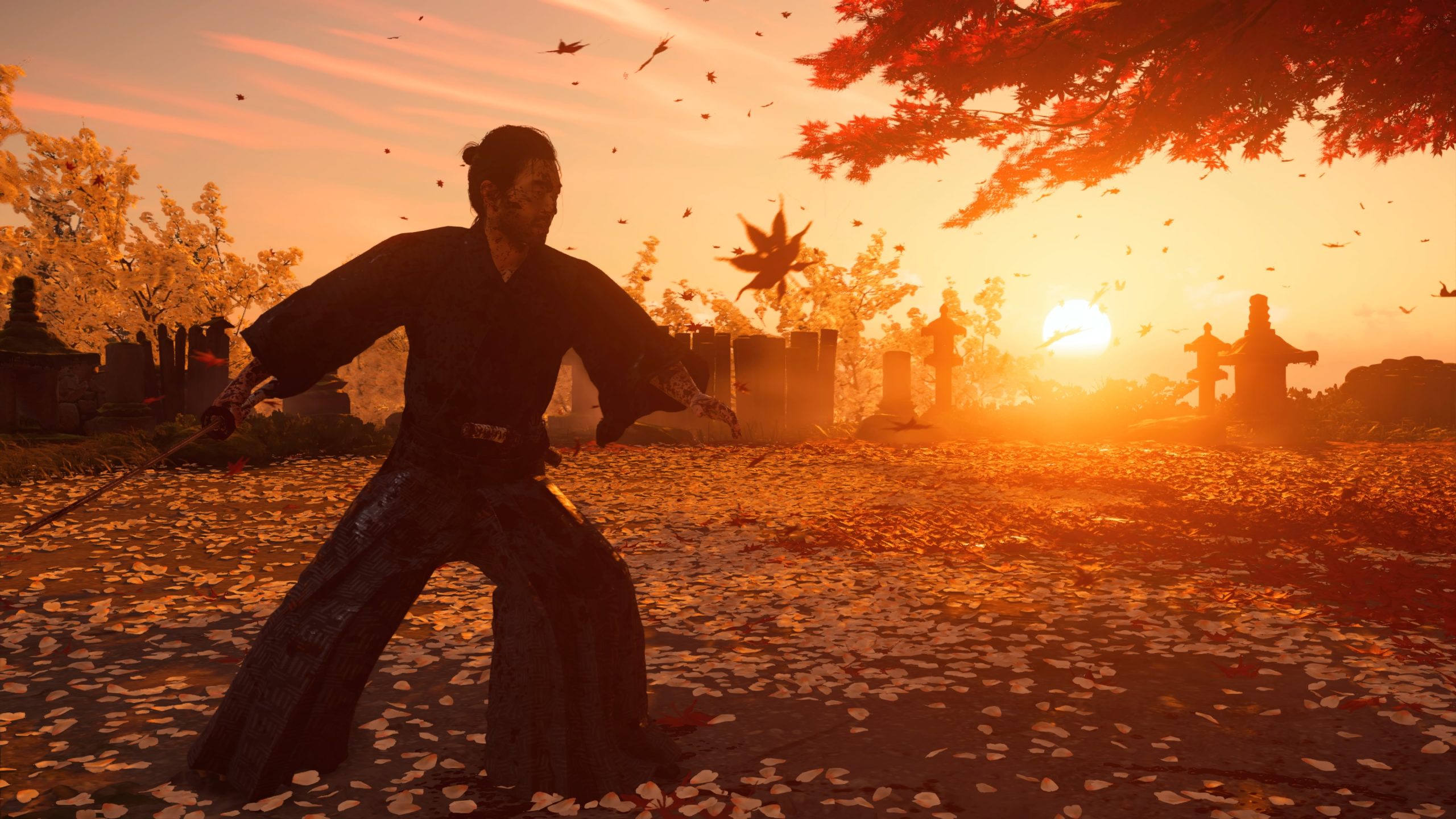 Jin is a weak character and his wishy-washiness makes him hard to identify with or support throughout, but he is well placed to be better developed in a sequel. The narrative has some predictable moments but overall lets you live a samurai… or samurai-like… fantasy. Ultimately, it’s back to the Assassin’s Creed comparisons we go – like the first AC game, this is a brilliant tech demo that’ll spawn much better releases in the future. There’s also an issue of appropriation that I’m not feeling anywhere qualified to discuss, though I’m eager to follow up upon after release.

In (very) short: like the initial entry in Assassin’s Creed, the franchise it unashamedly copies, Ghost of Tsushima is good but not great. I finished it to complete it, not because I was invested in the mixed bag that was presented.

Ghost of Tsushima was reviewed using a promotional code on PS4 Pro, as provided by the publisher. Click here to learn more about Stevivor’s scoring scale.