Guerrilla Games ends up doing a lot of heavy lifting for Sony’s newest consoles. Killzone: Shadow Fall led a launch effort for the PS4, and its newest, Horizon: Zero Dawn, is the poster child for the recently released PS4 Pro. While firmly rooted in science-fiction, Horizon strays from the beaten path, presenting a cavewoman-like hunter named Aloy as she searches for answers in what the developer has called “a post-post apocalyptic world”.

Aloy is a member of the Nora tribe, one of three main clans inside Horizon: Zero Dawn. The Nora are the most afraid of electronic remnants left behind by the likes of us, passing down stories of the technological beasts that once wholly ravaged the world — and though diminished, continue to do so. To embrace any aspect of technology requiring electricity is to become an outcast, even if it would give an advantage when avoiding the predatory gaze of metal beasts fashioned after wolves, horses, crocodiles and eagles. Numerous and relentless, they threaten the everyday lives of (what’s become of) humanity. 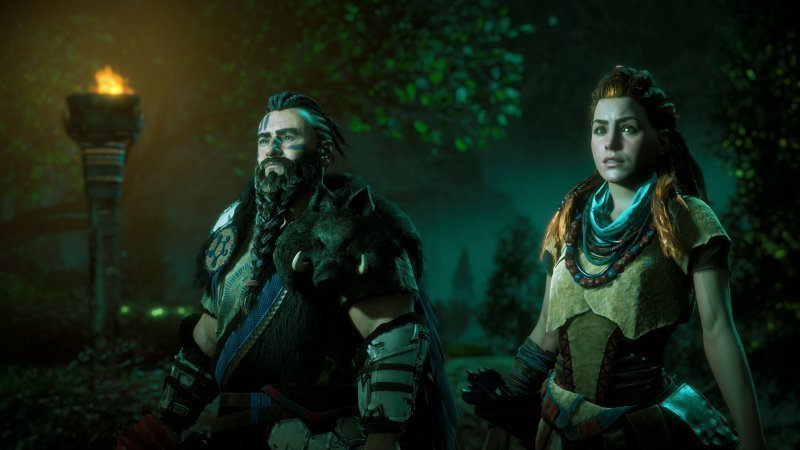 Horizon: Zero Dawn is committed to detailing its lore, from the mysteries of Aloy’s origins, to why society has been wiped off the face of the planet. While Sony’s not yet ready to confirm this new entity as a franchise alongside The Last of Us or Uncharted, it’s clear Guerrilla has planned for an extensive future. There’s enough backstory to choke a (robot) horse, presented in audio logs, text logs, holographic recordings and the like. The world of Aloy and the Nora could easy lend itself to other games — and a variety of genres — just like Microsoft’s Halo, with potential stories that could revolve around different tribes or even during different time periods. It’s rather exciting to contemplate the possibilities.

Just because there is a lot of rich lore doesn’t mean it’s been presented in an optimal way. Some is scattered about the environment, there for you to find, rewarding explorers for the effort being put in. When playing story missions, this changes drastically. A wealth of content is forced down your throat in a most unoriginal way — usually, via recordings that trigger, one by one, as you’re funnelled through a series of locked rooms. Granted, with the premise of Horizon: Zero Dawn, it’s hard to think of another way this information could have been communicated, but it’s still uninspiring nonetheless.

Even with six years to refine its presentation, Guerrilla’s writing is quite sloppy, from bland character dialogue down to total contradictions. Great lengths are taken to communicate to the player that Aloy’s mentor has willingly removed himself from the Nora tribe to take care of her; but when she finds a way to re-enter the tribe, he laments he will then be alone. If his choice was voluntary, surely he’d be able to simply come back as well? These types of inconsistencies become glaringly apparent as the plot progresses; Aloy and her tribesmen are crude Neanderthals as needed, and high-concept philosophers or engineers when convenient. 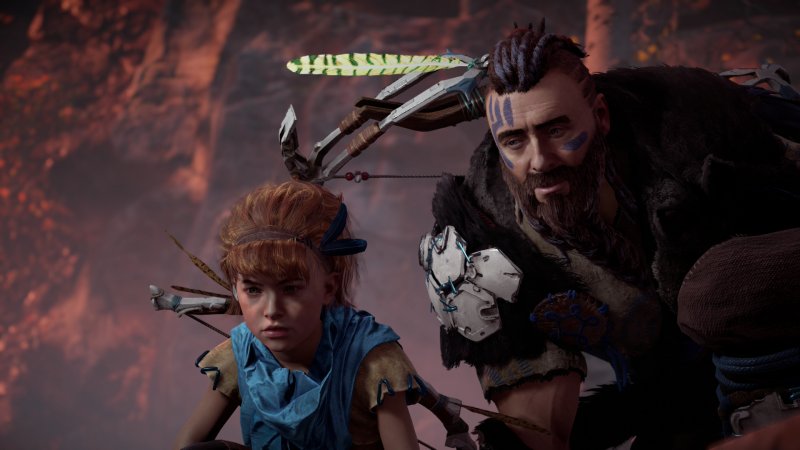 In terms of mechanics, it’s easy to spot the outside influences. Bow and arrow-based combat functions much like that of Tomb Raider; a campfire save system was also lifted from Crystal Dynamics’ newest. Assassin’s Creed has provided map synchronisation in the form of Tallnecks, Batman: Arkham with special vision that aids in investigation and Mass Effect in terms of overall story. Uncharted hasn’t been overlooked either, providing a framework for not only combat encounters but an opening sequence as well — what better way is there to bond with your main character than playing as their younger version?

The titles that have shaped Horizon: Zero Dawn are best in class. Together, they seem like they’d create a damn near perfect experience. While Guerrilla has done a decent job of overlapping all of these elements, they’re all done adequately at best, providing an overall package that has potential, yet lacks depth. Even with a terrific premise, there’s nothing that itches at the back of your brain, nagging you to run home and play it rather than be at work or school.

This notion extends across every element of Horizon. While Guerrilla’s Joel Eschler told Stevivor it’s meant to be played however you’d like, that can only get you so far. There is a huge emphasis on stealth as you start up, with ample options to avoid combat or perform stealth kills. As things open up, those chances diminish, either through barren landscapes with little place to hide, or because of ever growing numbers of increasingly difficult enemies. Playing through the story, I kept up with side quests and always was a level or two higher than that recommended of main campaign missions. I initially embarked upon a stealthy playthrough, but eventually found that ambition to be unattainable for a large portion of the game. 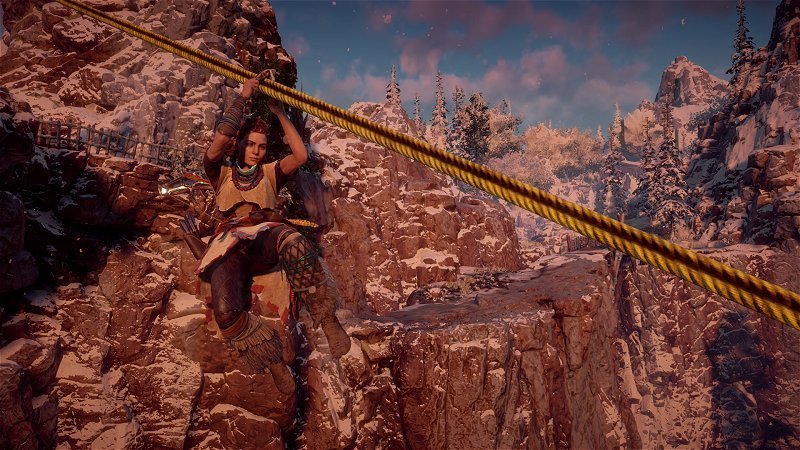 Aloy is given no other choice than to kill wave after wave of enemies, both human and machine, especially in main campaign missions. There’s no getting around it; you’ll need a number of powered up weapons, ample healing items and — perhaps the most telling — a little bit of luck. There is simply no way, unlike Eschler said, to “get by without having to take anyone out.” It’s the main problem seen inside Deus Ex: Human Revolution, putting in a hard stop for those who’ve made Aloy a silent killer. Quite honestly, combat is less fun than it is frustrating; I frequently spent twenty minutes clearing out an area — and then a wave or two more of extra enemies — only to perish at the hands of a distant foe and a well-placed headshot.

For all the hype that’s been extended to Horizon: Zero Dawn, it hasn’t managed to fully deliver. That’s a bit fitting — while we didn’t have access to its day one patch, confirmed by Eschler to enhance the PS4 Pro experience, I really didn’t notice an increased framerate or up-then-downrezzed textures on my 1080p television. Truly, there’s a lot of promise and potential in Guerrilla’s latest work, but ideas and intentions haven’t come together in a way that’s jaw-dropping.

Looking back, this sentiment mirrors our thoughts on Killzone: Shadow Fall, suggesting the studio might have problems refining its ideas. Once you see through its flash, Zero Dawn comes off a bit tired, rehashing concepts you’ve seen before. Its true failing is its everything but the kitchen sink mentality; if a little focus was applied, this would have been spectacular, not merely satisfactory. That’s said, let’s not mourn what could have been — just yet, anyway — and celebrate what is a decent groundwork for something bigger and better to come.

Horizon: Zero Dawn was reviewed using a promotional code on PS4, as provided by the publisher. Click here to learn more about Stevivor’s scoring scale. This review was first published in February 2017.