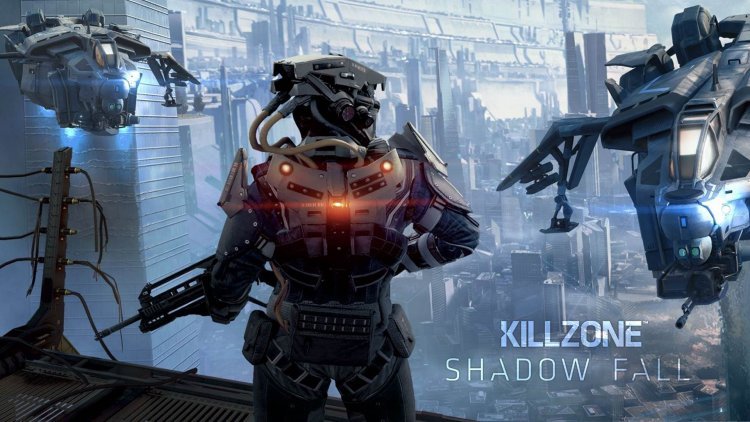 There’s no denying that the quality of the graphics in Killzone: Shadow Fall are astonishing.  If this is what developers are offering up with the power of PlayStation 4, I honestly can’t wait to see what games look like in a few years.

The incredible crispness of the textures. The minute detail included in every facet of absolutely everything rendered on screen. The draw distance. My god, the draw distance. It all adds up to some truly amazing artwork. But — and it’s a big one — incredible good looks do not make for the whole package. Unfortunately, Killzone: Shadow Fall, despite being gorgeous to look at, is a fairly pedestrian, by-the-numbers FPS. To be expected at launch? Probably. Disappointing anyway? Definitely.

Killzone is an odd franchise. It’s been around for nearly 10 years and in that time has seen the release of three numbered entries, handheld spinoffs on both PSP and PS Vita and a launch title on PS4. However, I’m yet to come across anybody who I’d call a die-hard fan. It seems to be a franchise you either think is ok or hate. I’m in the former camp. No Killzone has ever set my senses ablaze, but I’ve found them enjoyable — if predictable — romps. One thing the series has always had in its back pocket was a half decent premise. The thing the series has never done is used it in any interesting way.

The Helghast have always been portrayed as space Nazis and the Vektans as space America. Characterisations have consistently been broad, stereotypical cliches. In Killzone Mercenary the formula was played with and casting the player character as someone fighting on both sides for the highest price allowed for some deeper insight into the Helghast. The opportunity was mostly missed, but there was enough exploration of the Helghast, past being the “baddies”, to warrant interest.

With Shadow Fall, Guerrilla Games has once again created the possibility of a massively engaging and poignant story that sadly, like its older siblings, fails to capitalise.  Following the events of Killzone 3 (in which the planet Helghan is rendered uninhabitable) the Vektans offer asylum to the refugee Helghast by way of allowing them to re-settle on Vekta. The planet is divided in two and separated by an enormous wall (hello Berlin) with New Helghan on one side and Vekta on the other. The potential in this scenario is immense. Guerrilla is obviously aware of this and makes attempts to draw parallels between historic and current events and the game. But it does so in such broad strokes it may as well as not have bothered.

There are echoes of Afghanistan, 9/11, the recent uprisings in the middle east, East and West Germany and even the close to home matter of immigration and refugees. I say echoes as none of these subjects is broached in a way that causes them to land with any impact. What could have been a powerful and thoughtful narrative is rather lackluster and instead of hitting the player with hard questions about the world we live in, is instead about as strong as milky tea. There’s no problem with games having generic or standard stories if that’s all they strive for, but with Shadow Fall it’s obvious that the intention for more was there. That’s what makes it all the more disappointing when nothing materialises from the potential.

So, I think I’ve established that while the setting of Shadow Fall is ripe with potential, it’s squandered and the story is actually quite dull. But how does it play? The answer to that is “decent”. Killzone: Shadow Fall is a decent game. It adheres very strictly to the Killzone formula from go to whoa and rarely deviates. You carry two weapons at a time and through a combination of stealth and shoot-outs, make your way through a linear collection of disjointed levels. Shooting is solid and responsive and the guns sound deliciously chunky. As with all Killzones, getting behind cover automatically puts your character in a cover-state, which you pop out of by aiming down the sights. It’s a great mechanic that I’m frankly shocked no other FPS uses. Why Shadow Fall is only decent and nothing more is simply due to the fact that you very quickly feel as though you’re just going through the motions.

Enemies are stupid. Really stupid. I played on the hardest difficulty setting and while I found some sections challenging, it was due to the game throwing dozens of enemies at me rather than them using any kind of tactics or intelligence. My best way to deal with the Helghast was to simply go behind a corner and fire my gun as they ran into the line of fire. Idiots.

Shadow Fall gives you a couple of new toys to play with which are actually quite cool. First up is the echo-locator. By pressing and holding right on the d-pad an echo pulse is sent outwards revealing the locations of enemies and items. Holding the button too long will overload the device and alert all nearby enemies to your presence. It’s fairly easy to avoid overloading it, but a couple of times I absent mindedly held on too long and had the Helghast rain down upon me. Once the enemies have been revealed, they appear highlighted through walls and terrain, allowing you to plan your attack. It’s helpful while trying to avoid enemies or for when you’re trying to pick them off silently. They highlighting fades after a few seconds, but you’re able to repeat the process ad nauseum.

The second device is the OWL. This helpful little bot offers four different modes. Attack, shield, stun and zipline. These are selectable by sliding a finger in one of the four compass directions on the DualShock 4’s touch pad. To activate the chosen mode, you simply press L1. The responsiveness of the touch pad is surprising and intuitive. Using the OWL quickly becomes second nature and is a great way to show off the usefulness of the DualShock 4’s most questionable inclusion. Speaking of the DualShock 4, littered throughout the game are a myriad of collectibles. Some of which are audio logs. I was pleasantly surprised upon picking one up to discover that the audio was being played back through the controller. Playing sound through controllers is nothing new (Wii did it years ago) but the quality of the sound was brilliant. It was a clever usage of the controller and another way to show off it’s new features.

Once you’re done with the 8–10 hours of campaign you’ll want to dive into multiplayer. Shadow Fall’s competitive mode is fairly robust and fully featured. Everything expected from a current shooter is present and accounted for. What is different is that Shadow Fall ditches an experience based levelling system for one that revolves around completing challenges. Instead of having to unlock new and better equipment, weapons and skills almost everything is available from the get-go. It’s not about who can level up the fastest and then dominate with the best weapons, it’s about who is the most skillful player. It’s a refreshing change of pace for competitive multiplayer and one which I thoroughly enjoyed.

Making a return are roving multiplayer modes known as Warzones. Playing in Warzones puts you into random multiplayer modes one after the other, without ever sending you back to lobbies. It keeps the gaming going and means less time staring at loading and loadout screens. You can of course choose to play individual modes if you prefer. Killzone: Shadow Fall is here to serve you and it does so admirably. There are 10 big levels to play in, which revisit both indoor and outdoor sections from the campaign. What Shadow Fall lacks in the campaign, it makes up for in multiplayer. I’m not a fan of competitive online play at all, but if I loved playing Shadow Fall online it’s a testament to its quality.

Killzone: Shadow Fall is a gorgeous game to look at and a decent game to play, but its story is weak at best and boring and lazy at worst. It feels like a launch game and it feels like one that was slightly rushed. Given some more development time I think it could have truly shone and been a watershed moment for the franchise. Instead we’re left with a pretty good game that looks amazing and has a fun multiplayer. If you’re picking up a PlayStation 4 you could do much worse than Shadow Fall, but with the launch line-up being rather thin you can’t really do much better. Franchise fans — wherever you are — will really enjoy it, FPS fans will probably get a kick out of it and PS4 early adopters will marvel at the graphics.

The franchise still has a boat load of potential. Here’s hoping the next Killzone finally makes use of it.