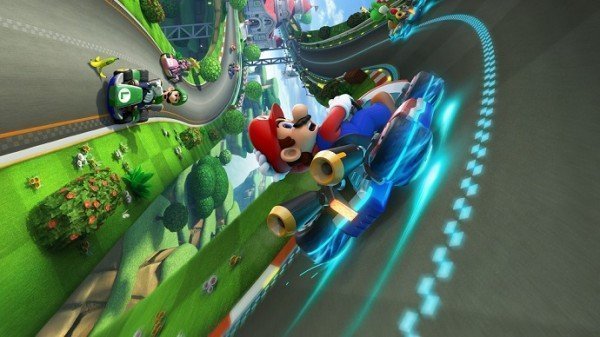 The upcoming Mario Kart 8 appears to have taken the best bits from the portly plumber’s last two trips to the go-kart track. This time however, it’s in glorious HD. The gliders and underwater sections from Mario Kart 7 are back, as are the bikes from Mario Kart Wii. Also returning to the series are fan favourites Waluigi and Toadette, but not everything is old news as there are a few new tricks up Nintendo’s driving gloves.

Littered throughout the courses are blue power-up pads that will make the racer’s karts and bikes hover a few inches off the ground. Their wheels rotate 90 degrees — just like a time traveling Delorean — and allow the race to continue through crazy loops and inverted sections of track. Great Scott! This new anti-gravity skill will have critics such as Isaac Newton baffled as the tracks can now continue into all manner of previously inaccessible areas.

Using the anti-gravity ability makes the kart or bike handle a little differently than when on the track. It’s almost like being in a constant power slide . Much like when the bikes were introduced the anti-gravity sections will take a bit of getting used to. The most interesting quirk however, is that while anti-gravity is active, bumping into another player causes both to get a small boost. This will be add a whole other layer of strategy in multiplayer. The new mechanic could see skilled players cooperating and possibly ganging up on the race leader. 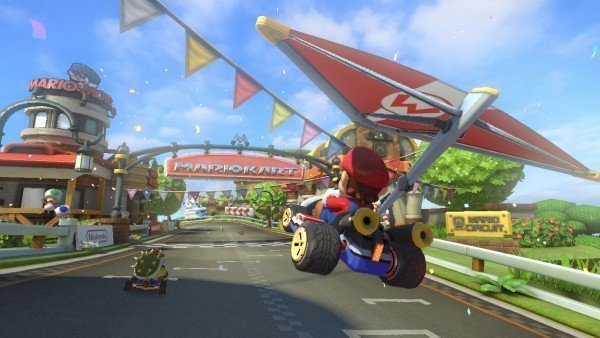 The Wii U GamePad as your primary controller allows you to switch between using tilt controls like in the Wii version or using the thumb sticks. The GamePad displays a map, leader rankings and even a horn for your tooting pleasure on the touch screen.  Mario Kart 8 is also playable with the Pro Controller, Wiimote and Wiimote and Nunchuck.

The races include 12 racers on the track at once and online 12 player co-op has been confirmed. Let’s hope Nintendo can put together a decent online experience. If not, what should have been the most played online Nintendo title for a long time, could be a Ghost House of empty lobbies.