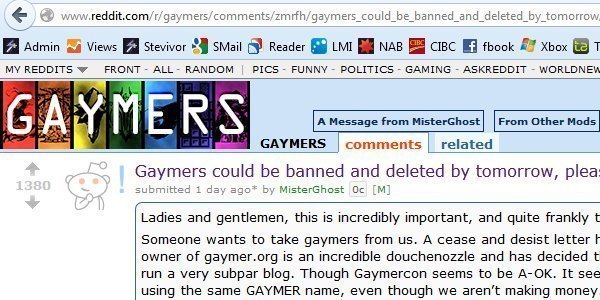 Well, this is something I’ll definitely have to write an opinion piece about. Until then, here are the facts: Chris Vizzini, owner of gaymer.org and controversial trademark holder of the term “gaymer,” today sent a cease and desist letter to the “gaymer” Reddit community, claiming infringement.

Vizzini successfully applied for the trademark back in 2008, causing controversy. Despite the arguments that the term was as generic to gaming as “n00b” or “pwned,” Vizinni was legally granted the term. His trademark on “gaymer” applies to online communities, specifically “hosting and maintaining an online website for others to discuss, receive and disseminate information concerning video games.” So, in short, the Reddit community infringes on this trademark, but the upcoming GaymerCon does not as it’s more than just an online community.

Vizzini has stated he’s sent the cease and desist because he’s required to defend his trademark or else risk losing it. He claims he has contacted Reddit twice already about the matter, and has received no responses to date. On the Reddit community, he wrote, “I started Gaymer.org in 2003 and began to build Gaymer as a brand. Thats why I trademarked and word marked the name. At that time, there was only one other site around dedicated to gay gamers. I have spent countless hours and thousands of dollars on Gaymer.org. I have done so gladly as it’s brought happiness to many people.”

Reddit is looking to rename the community or work with Vizzini for some other compromise, as admin spladug confirmed today. “I informed the mod team of /r/gaymers that we’d received a cease and desist letter for infringement of the ‘gaymer’ trademark and that our legal counsel had informed us that the letter presents a real threat that they would sue reddit. I let them know so that they could start planning how to respond (including seeing if there’s any way for them to work things out with the owner of the trademark,” spladug wrote.

Currently, visiting Gaymer.org will only reveal a message saying the site is “suspended,” though its unclear if this is a distributed denial of service attack or some other coincidence.

What do you think of this, gaym… um, gay gamers? Hell, I want to hear from straight gamers too — is this a term that should have been allowed a trademark? Should Vizzini be more reasonable in his quest to protect what he views as his gaymer “brand”? Should the Reddit community be forced to change its name?

Thanks to Owen for this tip!