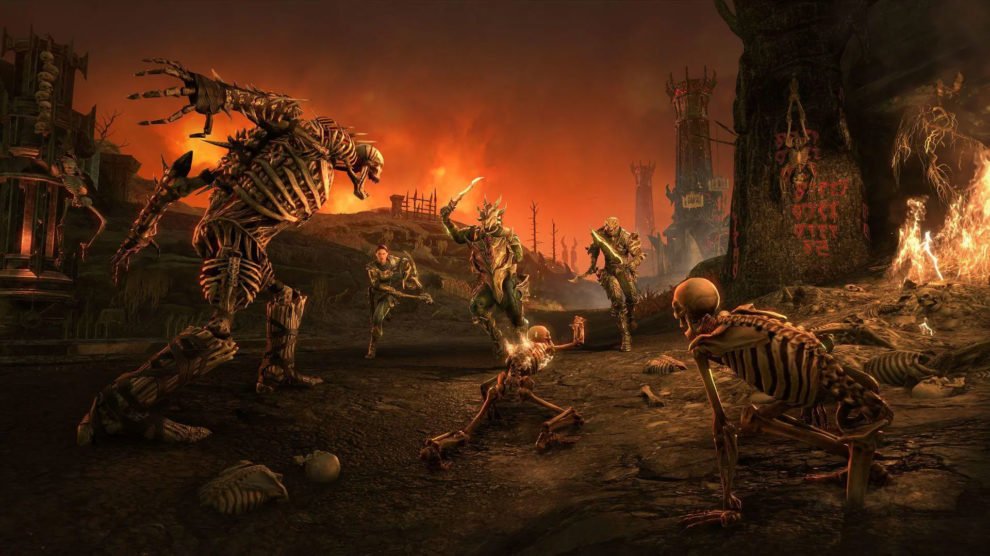 Creative Director Rich Lambert on the legacy and evolution at the end of the Gates of Oblivion.

The Elder Scrolls Online continues to be one of the most popular MMOs out there. In fact, this past year has been its strongest year since launch, reaching 19 million players across the board. The team at ZeniMax Online Studios is persistent with pumping out quality and quantity when it comes to updates for its now seven-year-old game.

To celebrate the cataclysmic conclusion to the Blackwood and Gates of Oblivion adventure, we had the chance to chat with Creative Director Rich Lambert about the legacy and evolution of ESO. While its Deadlands DLC may be the end for this year’s content, there’s always more just over the horizon.

Reeling it back to the beginning, The Elder Scrolls Online had a rocky start. Rich explains, “players were very vocal about the game and what it was and what it wasn’t.” As Tamriel’s first multiplayer online game, it had a good backbone. Combat was more action oriented in comparison to other MMOs at the time, but it still didn’t feel like Elder Scrolls. ZeniMax was “walking this line – trying to appeal to both sets, the MMO crowd and the Elder Scrolls crowd, and it didn’t please either side.”

“It needed to be an Elder Scrolls game first and foremost. That’s why Matt Firor [General Manager] doesn’t refer to ESO as an MMO. It’s an online RPG, because that helps kind of evoke the thought process we went through, which is its true core – it is an Elder Scrolls game.”

In response, the developers asked themselves critical questions: “What is this game going to be? What is the core of this game? Who do we want to appeal to?” After only a year of struggle, Elder Scrolls Online was retitled and rebranded as Tamriel Unlimited with a free-to-play model.

“We thought about the game and the types of features we wanted – remove the arbitrary level gates, remove all the barriers to playing with your friends, and really turn it into this I can go anywhere, I can do anything, I can explore at my own pace. That changed the game and put it on the trajectory we’re on today.”

Showcasing how well ZeniMax Online Studios can think on its feet, the team pivoted their direction and built new experiences for a range of players. Rich explains, “Orsinium was the first DLC we did outside of PVP and we wanted everybody to participate… We tested out some of the mechanics for the battle levelling and players flocked to it. They loved it.” Rich says this led to their “Chapter Strategy” where “chapters are for all players… you can jump into whatever you want to play, any order you want.” It made ESO very different to other MMOs at the time.

That trajectory reclaimed what was honestly a bit of a joke to Elder Scrolls fans, into experience for series diehards. Several large chapters came along the pipeline that invited adventurers back to familiar territory and new spaces. Morrowind, Summerset, Elsweyr, Greymoor and now Blackwood in 2021 all significantly expanded Tamriel’s lore and accessibility for new players.

MMOs are overwhelming, and Rich makes clear, “we don’t want to throw the entire game in a short 15-minute tutorial. We just give them the basics and they can then navigate the world and explore, learning along the way and spoon-feeding the rest.” Thanks for tutorial overhauls in the last few years, adventures can now “pick a direction and just go” and will encounter crafting quests and tooltips as they come across them at their own pace. Rich admits, “it’s not perfect… but we’ve found it works best for us.” 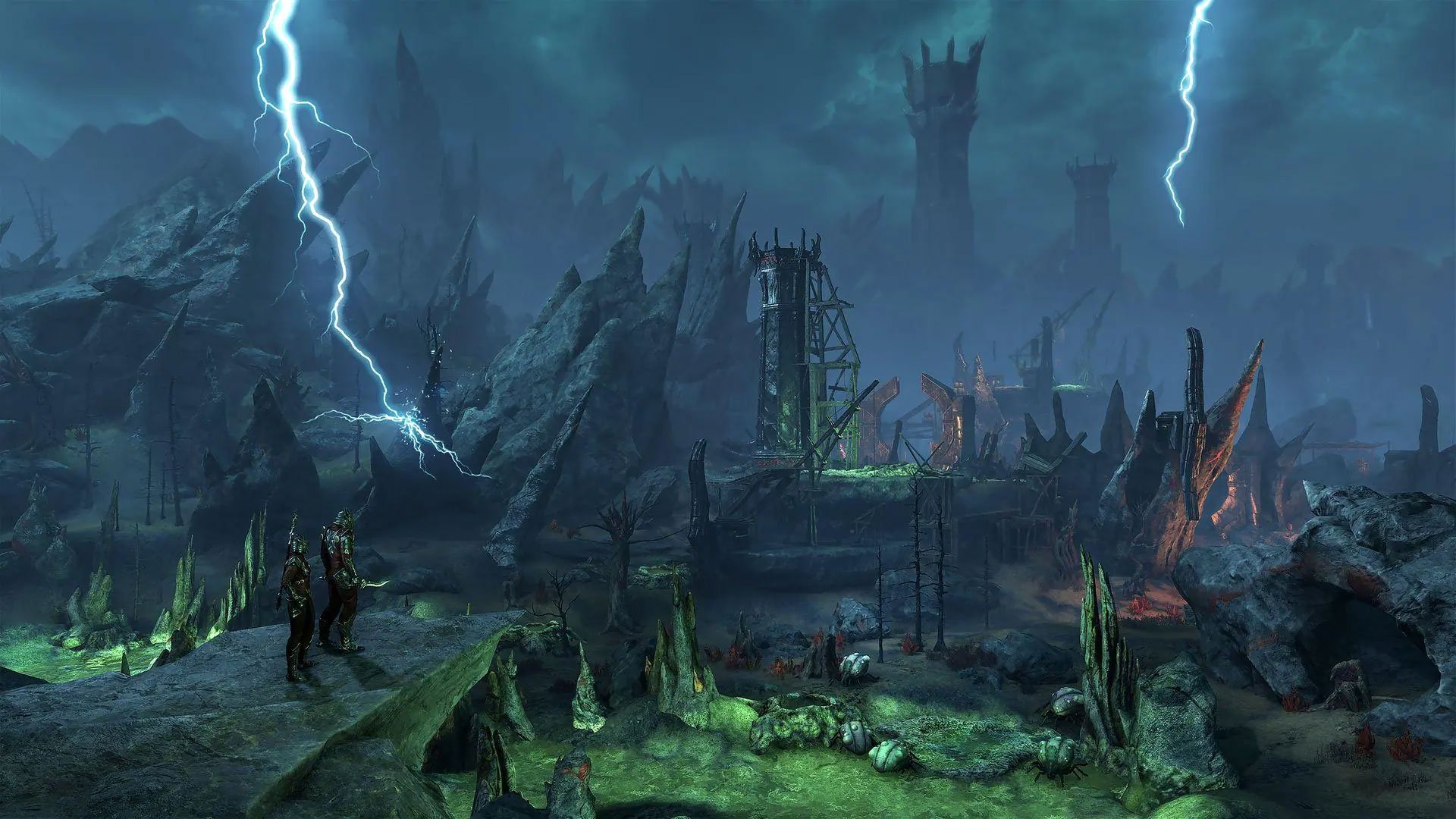 Adverse to the MMO genre, ZeniMax does focus on solo content for fans who treat ESO like a regular Elder Scrolls RPG. Blackwood introduces companions, which means two NPCs can accompany players throughout their journey and quests have always been very detailed and engaging. The developers mandate that all storylines are a “critical path” or are single-player compatible.

“That really changed how we tell stories and it allowed us to start throwing challenges at players in other ways. So, that’s why we’ve got roving bosses now in the Deadlands. We’ve been able to take some of the difficulty out of the overland so players can go through and play alone. We found a good balance there.”

From the thrilling world events to the terrific dungeons, adventurers worldwide congregate to Tamriel to experience the world of Elder Scrolls, together. Rich notes the team is “really passionate” about dungeons and trials, always looking for engaging ways to make new content. According to him, they scour the community forums, Reddit, Twitch, and feedback forms to learn what’s working and what’s not. Rich also talks about intuitive ways they improve their game engine and technology to build more engrossing battles. 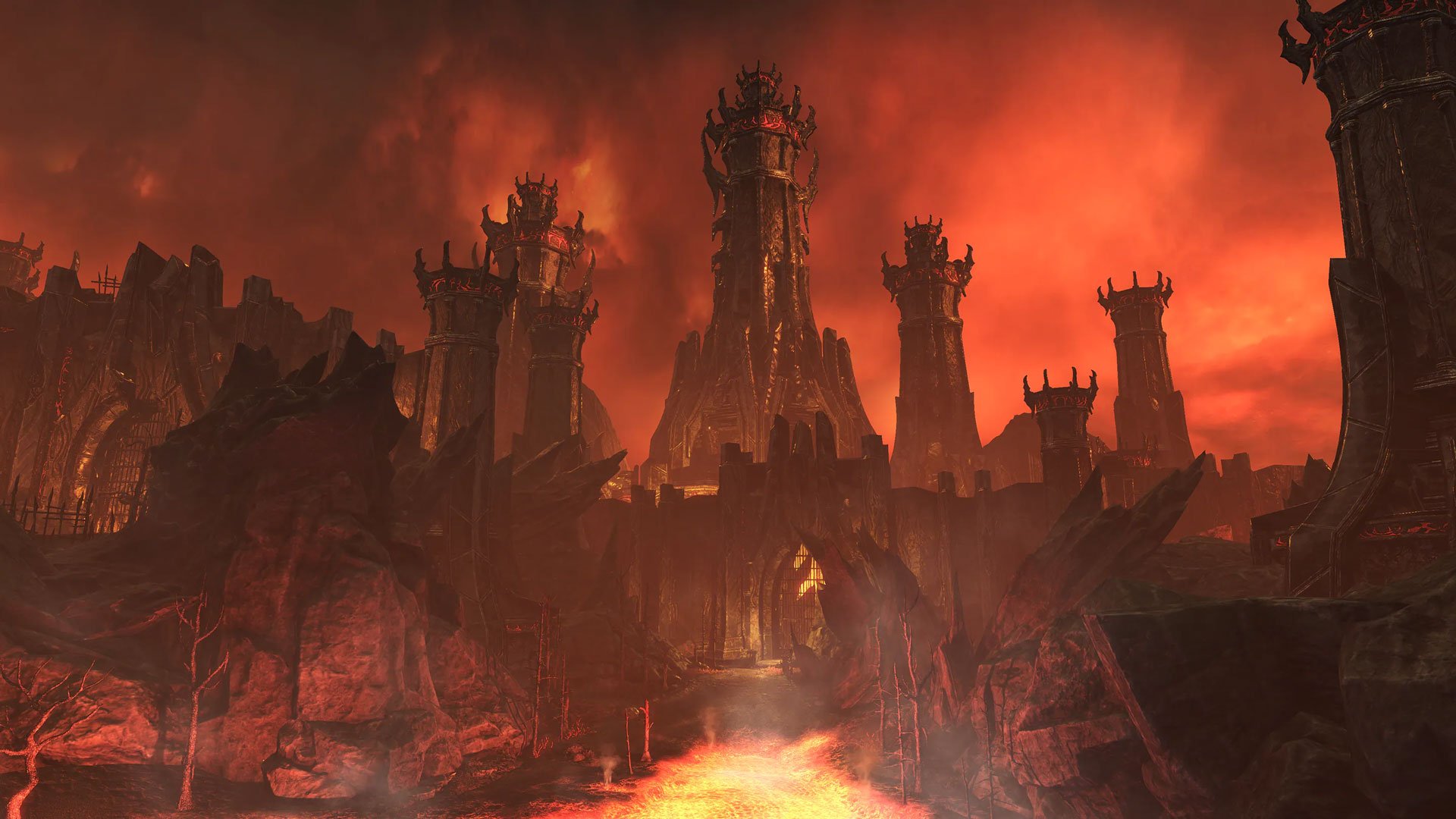 “A story that I love to tell people is the very last boss and Rockgrove. If you take too long, the boss will just outright kill you. But rather than an abrupt boss rages and kills everybody, what we did is make the lava in the zone begin to rise. A visual indicator of time running out.”

“That mechanic is something that we didn’t think was possible. We never built anything like that in [ESO]. A particularly ingenious designer was like, ‘I think I found a way to do this’… and it worked. It’s all down to the team and them interacting with the community and listening to feedback.”

In saying that, the community obviously isn’t always right. Sometimes the loudest voices can be the most troublesome. Yet, Rich and the developers behind ESO know from experience which feedback is important. He believes the most challenging part of the job is deciphering conflicting opinions between the community. Luckily, they use their own data and anecdotal experience to make informed decisions.

“We have a BI team, data scientists, that look at logs and turn them into interesting spreadsheets and reports for us to digest. Then we take our internal and external feedback. Most of the team plays the game regularly and I play and stream all the time. So, I kind of have a finger on the pulse of the community as well. We use those pieces to help make the right decisions.”

One of those decisions revolved around upgrading the games’ tech. ESO has had performance issues on older hardware and with Blackwood, significant upgrades have come to the game, including enhanced editions for PS5 and Xbox Series S & X. Yet, the game gets older every year and MMOs like New World release with impressive visuals almost monthly. Rich reassures that these technological improvements will continue. “With Update 32 and Nvidia DLSS and DLA tech coming online, we announced not too long ago through AMD that we’re going to be working on their version of that FidelityFX Super Resolution stuff.”

Despite its legacy, Elder Scrolls Online is still not without its criticisms. Blackwood was critically panned for neglecting PVP and Rich recognises how large the PVP audience is, understanding their concerns completely. Unfortunately, the decision to limit PVP content was due to restraints of “poorly performing systems” that were “just a recipe to cause more frustration for players, making performance worse.” It seems like PVP is on the backburner until the game engine can receive the proper overhaul it needs.

As Australians, we’ve suffered a brunt of lag and network problems since Elder Scrolls first came online. With no dedicated Australia/New Zealand servers, players from our region often have pings of 150+, which can make action-combat and PVP frustrating. In response, Rich raises it’s not as simple of a solution as we might believe. 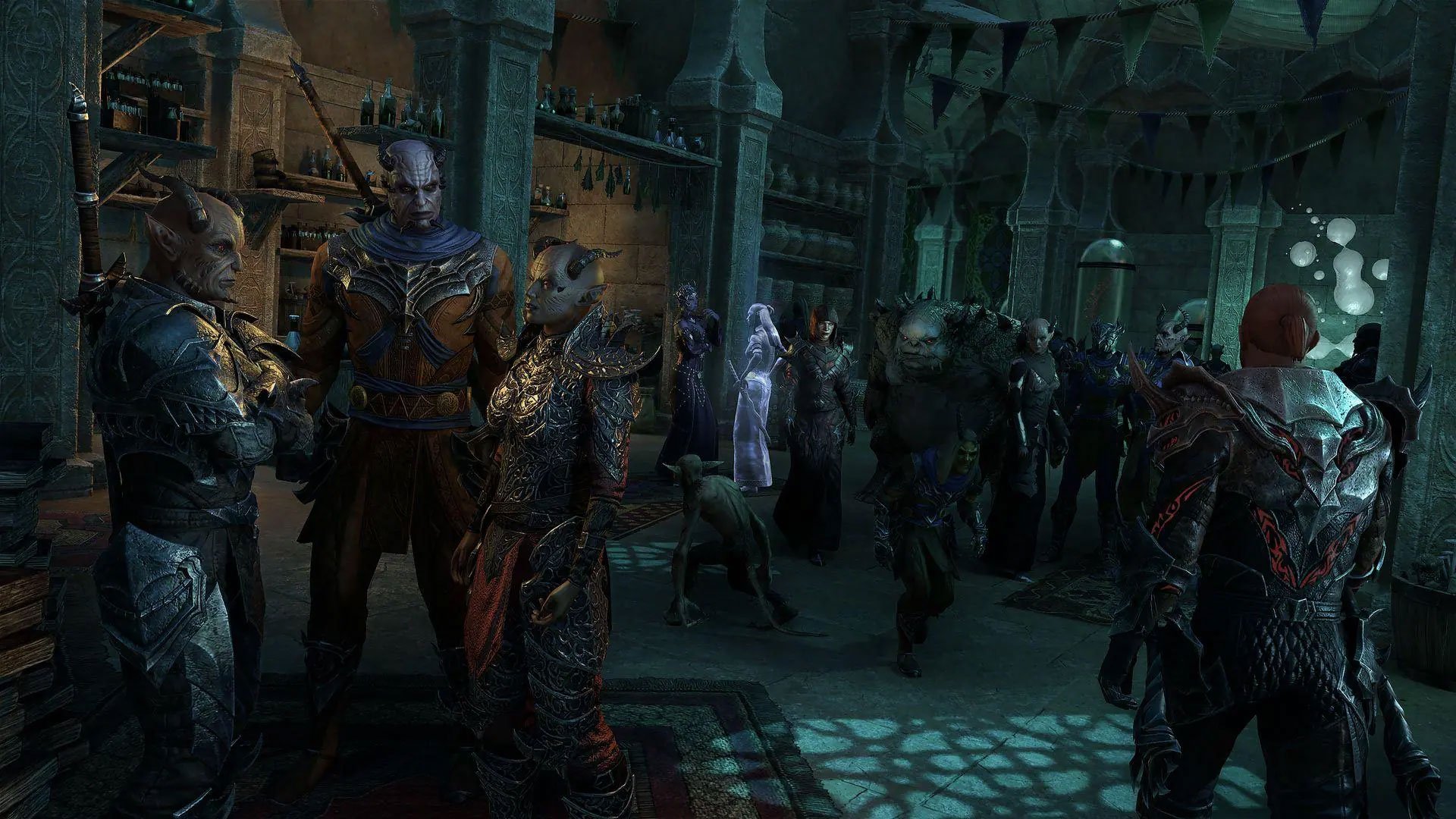 “[ESO servers] are designed for hundreds of thousands of players simultaneously and not what you see in some of the other games where it’s five or ten thousand. So, it is really hard to build servers and put them in areas where we’re just not going to see that kind of player base. We are working with some of our Aussie friends to try to improve those tunnels but we’re kind of stuck to the laws of physics, like light only travels so fast.” While I think most of us can look to many examples of how servers of only thousands of players can be catered for regions around the world, what Rich says isn’t false.

Elder Scrolls Online will keep on to evolving in the years to come. The team at ZeniMax will “continue to support ESO as long as people want to play” and Rich confirms that the next chapter is already in development. We prodded for information on what would come or how ESO will incorporate the upcoming The Elder Scrolls 6 but understandably nothing can be shared just yet. Instead, Rich left us with a promising remark: “don’t worry, we have lots of cool stories and places to go.”

Omi's a passionate gamer from Melbourne, Australia who can't live without their Nintendo Switch and PC. Community engagement worker and writer by day, live-music punter and devourer of weird foods by night.