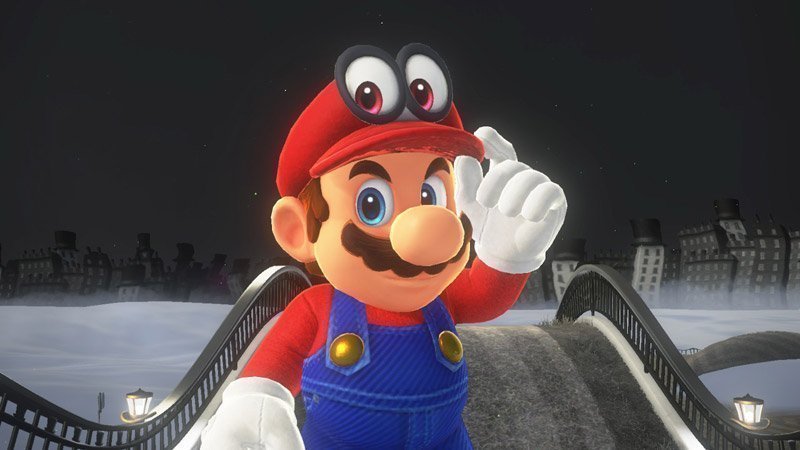 After conquering the galaxy for a second time seven years ago, Mario has come back down to the ground as he embarks upon an odyssey of the blue planet seeking moons, not stars, while Peach faces a wedding that’s out of this world. While it feels like a new Mario game is never far away, it’s been a very long time between sandbox 3D platformers.

The portly plumber has been busy karting, building, fighting, Rabbids’ing, (new super) side-scrolling and faffing about in a middle ground that liked to call itself ‘3D’. There’s plenty of room for all of those, but nothing compares to a proper 3D Mario platformer. There have only been four others since Super Mario 64 changed the game 21 years ago (and one of those was a sequel) and that’s why number five, Super Mario Odyssey, is so special. Nintendo is heavily reliant on the Mario brand, but the sparse sandbox platformers are carefully curated.

Super Mario Odyssey channels the best of Nintendo to craft an odd but brilliant collection of puzzles and collectables. The Mario DNA shines through to the surface, and I sensed a glimmer of Splatoon, a touch of Pikmin, a hint of Metroid and even a fragment of Zelda exploring some of the intriguing kingdoms scattered around the planet. The highly publicised and frankly weird New Donk City got plenty of press, but it’s actually one of 14 kingdoms Mario must explore before confronting Bowser on his wedding day, and there are more to unlock after that. Each kingdom plays by its own set of rules, styled with distinctly Mario flair and a unique trait to hang its hat on. 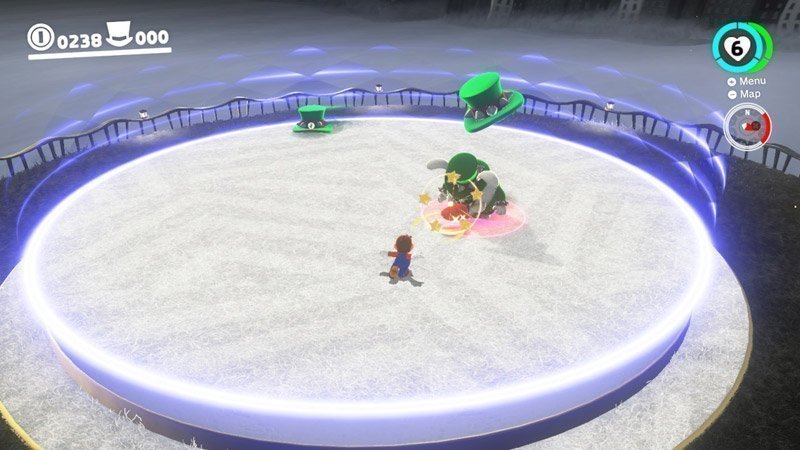 To jump between kingdoms Mario must collect a certain number of moons hidden within. They are far more populous than the stars he usually has a hankering for, with some hard to miss, others hidden in plain sight and several that will require your thinking cap to uncover. The minimum number of moons required to progress is displayed as prominently as health, but the total number available in any level requires more comprehensive digging through the menus.

The pre-credits kingdoms can be completed in as little as 6 hours to reach a final confrontation with Bowser by achieving the minimum targets. I got there in about 10 hours, trying to push through as quickly as possible to a tight review deadline, but the lure of such delightful levels proved too much as I was constantly drawn into exploration. You’re looking at beyond 25 hours to collect as many moons as possible in each level – some of which require returning later. There are also multiple new kingdoms to unlock after the credits have passed, including a place that feels like home and a popular holiday destination, which keeps the odyssey going much longer than it initially appears on the itinerary.

With two types of coins to collect (don’t worry, there are no microtransactions here) and plenty of power moons, the clever platforming provides motivation to explore every corner of the map and seek out the hidden nooks of each level. Despite only needing a modest collection, the accomplishment of seeing your power moon tally grow drives you to leave nothing behind. 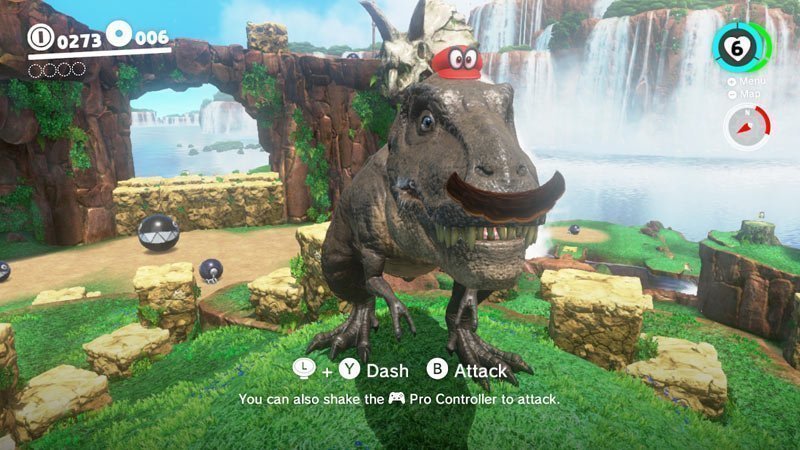 Despite the scarcity of sandbox platforming games, Nintendo assumes you are familiar with Mario’s routine, much of which carries over into the 2.5D and “3D” (but not really) incarnations. There’s a handy cheat sheet to refresh your memory, and Mario’s movement feels as fluid and natural as ever. Bringing Mario’s hat to life as Cappy refreshes gameplay that never became stale. It’s both stranger and more innovative than Sunshine’s F.L.U.D.D. and easier to get used to than Galaxy’s spherical levels. It’s bizarre to explain to someone and the promotional materials raise a few deserving eyebrows, but the hat mechanics deliver amazing gameplay unlike anything we’ve seen before; and yet it works so well because we actually have seen some of it before, we just didn’t know what we were preparing for.

As well as acting as a boomerang style weapon, Cappy allows Mario to ‘capture’ enemies, creatures and the occasional object to take control of them. A majority of the enemies he can commandeer will be familiar to anyone who played a Mario game in the ‘80s or ‘90s, so you already know exactly how they move, what they do and how they might be useful in a very specific circumstance. We’ve actually been training to solve the platforming puzzles of Super Mario Odyssey for decades without knowing it. Becoming a zip or flinging yourself off of a pole requires thought for all of about a minute before it becomes second nature. For something so unusual, Cappy becomes a natural part of play very quickly.

Cappy changes style as part of Mario’s expanded wardrobe; any excuse to finally get out of those overalls. A change of hat doesn’t actually affect the gameplay, however, which caught me off guard. Buying new pants and hats with either of the two in-game currencies is regularly reinforced, but chucking on a snorkel doesn’t allow Mario to swim for any longer. Instead outfit changes are mainly aesthetic and used to allow entry into rooms restricted to certain professionals. 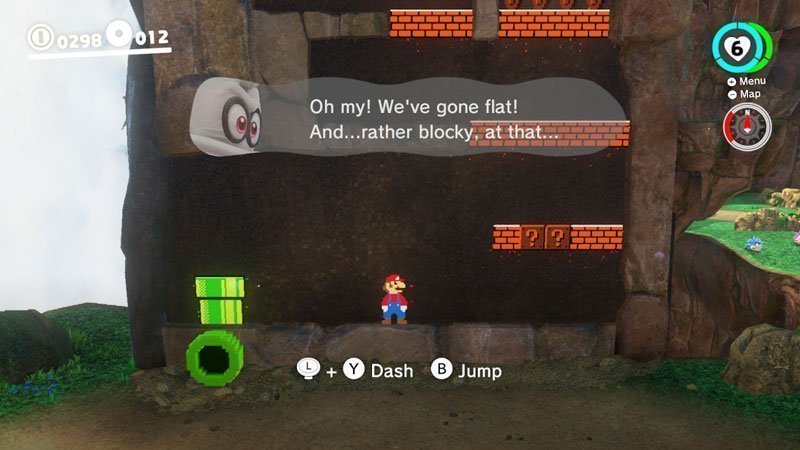 Playing dress ups looks the coolest when Mario reverts into his 8-bit self by jumping into a warp pipe and being sucked into a 2D segment reminiscent of Link slipping into a wall in Zelda: A Link Between Worlds. How these 2D segments combine to form parts of larger 3D platforming stages is pure genius; I couldn’t wipe the smile off my face. Yet the best of these are found somewhat off the beaten path, as Nintendo rewards players willing to put in the effort. Actually, “effort” is the wrong word. It’s impossible to force yourself to hurry to the next kingdom when there are still secrets to be discovered; with Super Mario Odyssey you get out what you put in, and it’s pure delight.

Even as we approach the dawn of the 4K era, Super Mario Odyssey looks stunning in action, with one exception; Mario meets quasi-realistic people straight out of the 1940s is weird, but this isn’t common outside of the Metro Kingdom. Odyssey runs perfectly at 720p in handheld mode and docked outputting to a TV. Whereas Breath of the Wild runs smoother as a handheld game and can struggle with the increased resolution on a TV, Super Mario Odyssey has no issues and runs steadily either way.

If I have one fault it’s the insistence of implementing motion controls that don’t add anything to the experience. Having them as an optional extra when using the JoyCons in the detached configuration is one thing, but why do we still need waggle in handheld mode or when using the Pro Controller? Shaking a controller to fly faster or stretch further is just annoying; it isn’t unique to or improved by motion controls. I don’t want to shake the screen I’m trying to look at when flying, nor do I want to wave around a conventional controller for a tacked on boost. The Switch Pro Controller may be the least innovative Nintendo has ever released, but it’s the best controller it has produced in terms of functionality for playing a conventional game. Adding waggle, despite being minor, to justify the Pro Controller’s motion sensors undoes some of the good design. 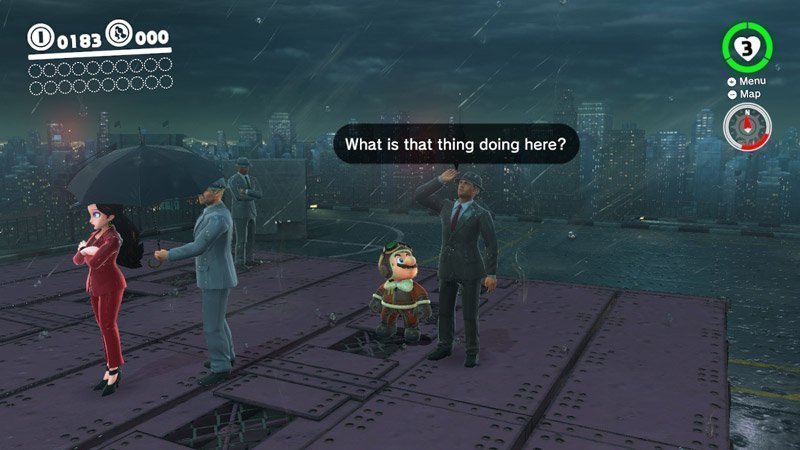 With Super Mario Odyssey Nintendo proves the 3D sandbox platformer is not only alive and well, but that it can continue to be evolved and surprise us, consume us and astonish us in clever and elegant ways. The simplicity of exploring kingdoms blends seamlessly with the complexity of some of the trickier moons, and that perfect formula is why only Nintendo has maintained a seat at the table in a genre abandoned by almost everyone else.

Super Mario Odyssey was reviewed using a promotional code on Nintendo Switch, as provided by the publisher. Click here to learn more about Stevivor’s scoring scale.