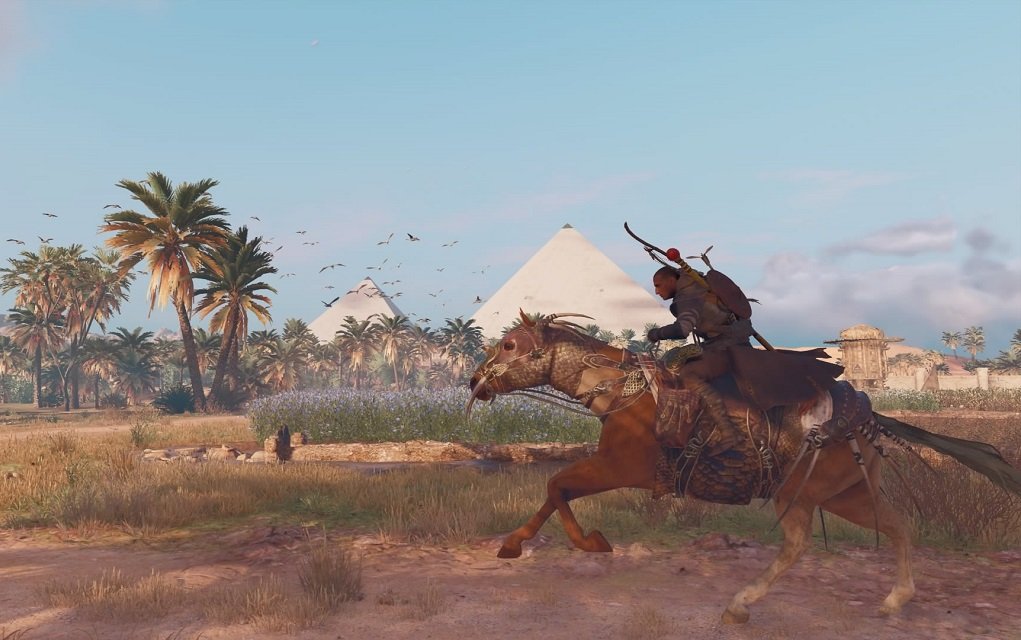 The best in the series, by far.

It’s funny that the Assassin’s Creed series is focused on looking back in time, given the franchise’s own turbulent history. The first installment was as bland as games can be, while the second — like many Ubisoft titles — was what the first should have been. AC III was so bad I don’t even want to talk about it and, like most, Black Flag was my favourite of the series… that is, until now.

Origins is an Assassin’s game that’s been gutted to the bones and refurbished for a completely new Animus experience. The game is much better for it, all across the board.

Ubisoft has been marketing this as a new RPG-esque Assassin’s Creed experience for months, yet I was still surprised by how foreign it initially felt. If you’ve spent the past ten years developing your AC muscle memory, prepare to throw that right out the door. From the moment you take the reins of Origins, the new direction the series has taken is thrust upon you like a wrist blade to a target’s throat. You knew it was coming eventually, but you still find yourself ill-prepared.

The most obvious change, and the most challenging adjustment for veteran players, is to the combat system. Gone is the choreographed and repetitive ballet of eliminating one enemy at a time with a successful quick-time parry, your target’s friends patiently standing by for their own taste of your blade. Engagements are now much more hectic and very difficult to master. Multiple enemies attack you at close range, some on horseback, and all from different angles. These keep you busy while ranged archers tear chunks off your health bar from a distance. All of this happens at once so blocking, dodging and countering attacks demands you read and anticipate the movements of your aggressors which takes time and patience to grow accustomed to.

In the early stages of the game, Origin’s new combat mechanics will most definitely frustrate some, especially considering the game throws you into the deep end in the first minutes with some very brief instructions. There’s no hand holding here; persisting through the first four hours and taking the time to adjust to the new AC format will turn frustration into joy as each successful strike or parry becomes an achievement worth celebrating.

Even once combat is mastered, engagements continue to be challenging. A massive array of weapon types, each with their own specific attributes. Depth is continually added to brawls as they genuinely force you to adjust your strategy depending on the strength, speed and reach of the weapons being wielded by both you and those of your opponents. Once you’ve found your favourite weapon loadout, the ability to keep them with you and upgrade them (at a hefty cost) at blacksmiths will bring their level in line with that of your character progression — a welcome option to those struggling to adapt.

Further to this, taking on four or more enemies at a time, even if matched with your level and especially if the group includes a higher ranked commander or captain, will result in a very speedy death. Combining stealth with the use of your eagle familiar, Sinu, isn’t just a fun little exercise but is now an absolute necessity; scouting and strategising is now incredibly important.

The series has a new levelling system that makes Origins far more of an RPG than ever before. Experience points earned with XP grant the unlocking of special abilities in three intertwined skill trees: Hunter, Warrior and Seer. They each, of course, have play style-specific abilities. As an added bonus, the last ability in each skill tree can be upgraded over and over, making you a powerful force to be reckoned with. Levelling up also increases your strength and health levels making you worthy of standing up to more challenging foes. Both main and side quests can be completed at any level, though if you attempt any quests that are three or more levels above you, you’re going to have a bad time.

This is where things get frustrating, as there are points in Origins where you’re forced to grind through side quests for literally hours on end because main story missions are ranked well above you. Even in the earlier stages of the game, some level gaps between main missions are as large as eight points, rendering them impossible. Grinding through those eight levels is at least the equivalent of fifteen side quests.

This approach is of course designed to encourage players to explore the world but the length of time spent grinding between main missions is excessive. On a positive note, even though quests at their core are predominantly standard ‘fetch this, kill that’ filler missions, the majority are multifaceted and have their own self-contained stories that are loosely tied into the main plot, which as the game title suggests tells the story of the first ever Assassin of the Brotherhood.

Protagonist Bayek is a Medjay; a kind of police officer and a protector of the land. Disclosing his initial motivations for becoming an Assassin would ruin a key component of the Origins plot (no spoilers!), you’ll see it coming a mile away. Thankfully this early shortfall is redeemed by some interesting characters along the way who, by their subtle personality traits, complement Bayek’s stoic nature.

While he’s largely flat, Bayek is still a more interesting character than AC III’s Connor Kenway, though he’s certainly no Ezio Auditore da Firenze. His no-nonsense, rough exterior is on occasion fractured ever so slightly to show some believable emotion when he interacts with certain others — in particular his wife Aya, who is a much more likable character. I’d put money on Aya starring in either her own DLC or, better yet, a full length spin off title.

Truly, the greatest component of Assassin’s Creed: Origins is Egypt itself. It is, by far, the most interesting of landscapes seen in an Assassin’s Creed game. Huge cities are filled with men and women going about their business, children playing in the street and stray cats who adorably follow you around if you take the time to pat them.

Seemingly endless deserts are ingeniously interesting to explore thanks to the occasional oasis, tombs and even mirages that offer clues to areas of interest if Bayek spends too much time in the sun. Throw in some forests, rivers and mountain areas teeming with bandits, hippos, lions and all sorts of other dangers, and of course all the iconic Egyptian landmarks and a near-flawless draw distance (something I want to compare soon on Xbox One X -Ed); this massive map has it all and it’s a joy to explore.

I expect that the masses will be divided about Assassin’s Creed: Origins. The series has been around for ten years with a formula that, apart from the minimised role of current day events, has remained largely untouched. It’s a formula that we’ve all grown familiar with — and let’s be honest: when a long-established series undergoes a significant change, it can be a bit daunting at first. Changing Assassin’s Creed to this extent was no doubt a huge risk, but one well worth taking. If you take the time to grow accustomed to this new Animus and embrace the challenges it offers, you’ll soon be asking why it didn’t happen sooner. Origins is a must have.

Assassin’s Creed Origins was reviewed using a promotional code on PS4, as provided by the publisher. Click here to learn more about Stevivor’s scoring scale.