Time to jump back in.

The Monster Hunter series is an absolute juggernaut, beloved by its die-hard fans especially in Japan. I’ll admit, since reviewing Monster Hunter 4 Ultimate way back on the 3D5 in 2015, I’d put the game (and the series) down and not taken another look. At the time it hadn’t felt like my kind of game, so I was happy to leave it to those who love it (and Hamish) while I moved on.

Now that Monster Hunter Rise has come rampaging onto my Switch, that opinion may be shifting.

The latest instalment in the long-running series, Rise sets players up in Kamura Village, a new and decidedly Japanese-feeling region from which to base your hunting life. Players once again take on the role of a Hunter, with the job to hunt and capture the various fearsome beasts that roam across the land’s varied biomes.

The village itself lies under the threat of the Rampage – a recurring calamity in which the region’s monsters swarm and attack the village, threatening the lives of the men and women who live there. It’s been fifty years but the time is quickly approaching once more, and you are tasked with helping prepare the village for the onslaught by hunting the local beasts and preparing the village for waves of attacks that are sure to come.

To assist you in this quest, you have not only the traditional cat-like Palico assistant, but a new buddy in the form of a Palamute – a huge “Canyne” who doubles as both a combat assistant and a mount for exploring the map. The level of customisation involved for your player character is intense, let alone all the tweaks and details you can set on your two companions. Be prepared to spend at least your first hour JUST working on this. 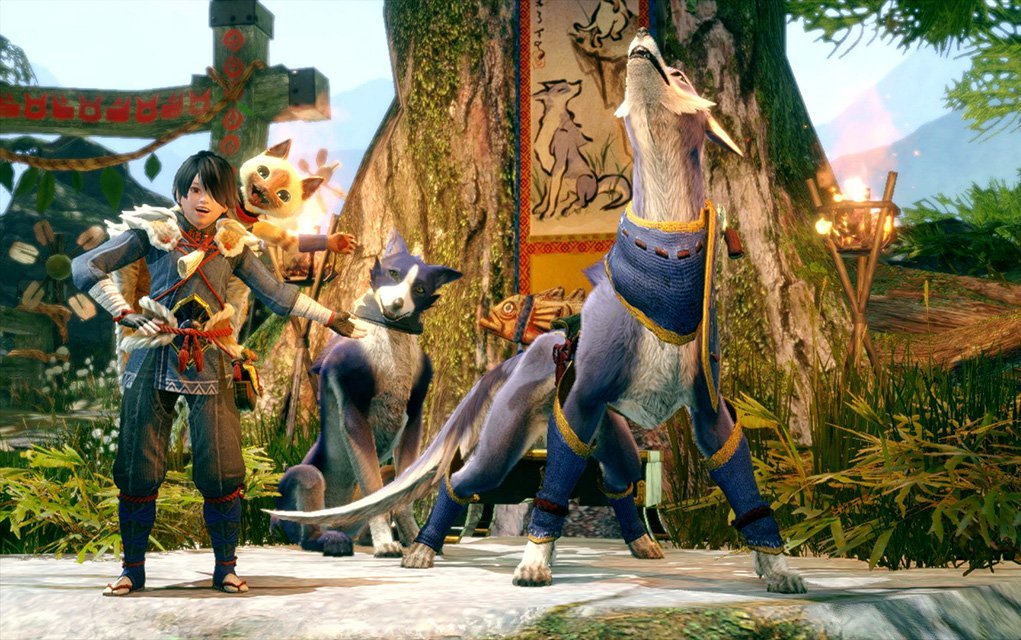 You may not see that much of it once you start crafting and equipping various monster-themed gear to your little trinity but it sure feels nice to know that under that dragon-hide helmet, my character is sporting a neon purple afro and a smile that would make his own mum disown him.

When you finally make it past character creation, the major game beats are going to be familiar to any returning Monster Hunter players – take a quest, go to a specific region, hunt the monsters, find the materials, fight the big bad, return to base and craft upgrades. It’s a winning game loop and it doesn’t need to be altered all that much. What has changed are some of the specifics of how you go about that; where these regions used to be broken up into separate, smaller sub-zones, Rise now features a seamless map for each region that allows you to explore without loading screens or pauses. And honestly? It feels great.

One of the things that threw me on my last Monster Hunter experience was the boxy nature of each ‘room’, like I was just scouring my way through a particularly lush dungeon. Now you can freely move across the map and so can the beasts you’re hunting, making the whole process feel a lot less stilted. Adding to this is the addition of Wirebugs, essentially a grappling hook mechanic that really improves the verticality of the game world as you move through it. 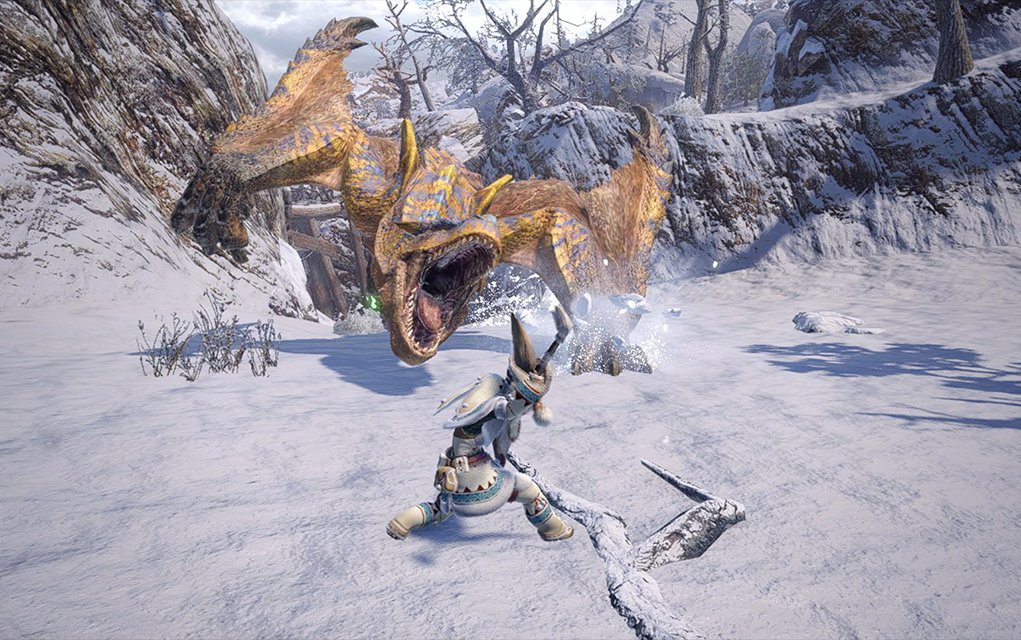 With no fall damage to worry about, you can scale cliffs, climbable vines and the slingshot-like Great Wirebugs you can place at certain points on the map to get the jump on your prey or find hidden materials and pathways to make your traversal even easier. Being able to mount up on your Palamute makes this even easier – these giant dogs are capable of scaling some climbing surfaces and have a solid run speed to zip across the map, without depleting your own stamina.

In addition to the traditional hunting and gathering missions, Rise also introduces a new survival mode called Rampage – as waves of monsters assault Kamura Village, you’ll be tasked with fending them off, mounting and manning defences, and directing NPCs to defend the village alongside you. This tower defence mode shakes up the game and will see you bouncing back and forth to manage crisis points as waves of enemies smash your defences to pieces.

I didn’t think I was going to mesh with this game when I first fired up, thinking it would be a slog to play as its not my typical kind of game. After a few outings in the wilds around Kamura, though, I started to get a feel for its loop. As soon as you struggle your way to taking down your first big monster and can start upgrading your gear, the feeling of taking down those fodder monsters just that little bit easier is very encouraging. Where a gang of Jaggis initially worried me, I’m now batting them aside like houseflies. 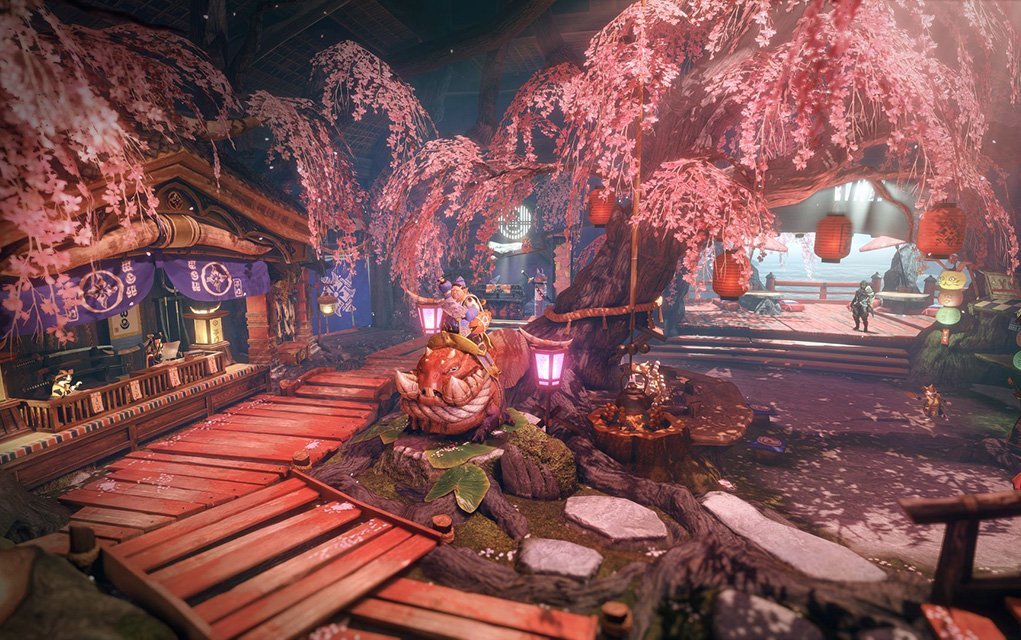 I’ve skinned my conquests, made a cute hat out of them and kitted my furry buddies out with matching duds – I’m feeling good. With the small ease-of-play improvements for traversal and map size, it’s much more comfortable to drop in, do a few missions and upgrade my loadout, and feel like I’ve actually made some headway in the game.

That said, I’ve barely even scratched the surface of Rise! With 14 different weapon types to try out there is SO much variety available here… and wave after wave of tutorial screens to match, accordingly. Be prepared to keep seeing those for a long while.

If the clunkiness of Monster Hunter has held you back in the past, Rise could be a good jumping-on point to give the franchise another try. I’m not saying you’re going to be seeing pro strategy videos on YouTube from yours truly any time soon, but I might stick around to solve the mystery of the Rampage after all.

Monster Hunter Rise was reviewed using a promotional code on Switch, as provided by the publisher. Click here to learn more about Stevivor’s scoring scale.