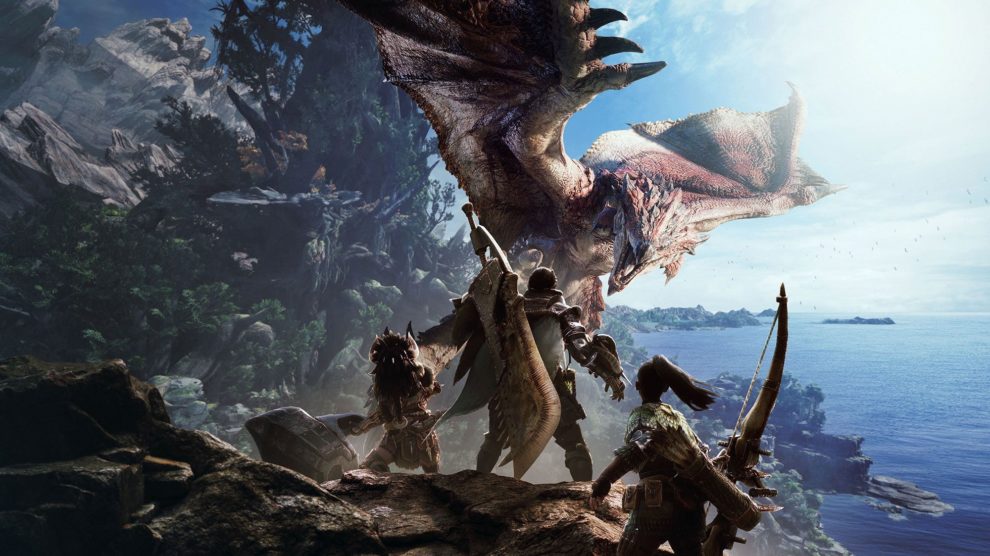 Grab your Great Sword and strap on your Gunlance — we’re going hunting. Monster Hunter: World is the sixth main game in the series from Capcom and the first since Monster Hunter 2 to release on a non-Nintendo system. For those new to the series, it’s a third-person action role-playing game (TPP-ARPG) focused around hunting down bigger and bigger monsters with the goal of either slaying or capturing them to gain shinier loot. It’d be easy to believe that the series lacks depth,  but with an extensive crafting system that lets you create weapons, armour, potions, poultices and ammo for your weapons to give you the edge in fighting bigger and badder monsters, there’s always something for you to do.

World sees your Fifth Wave (Fiver, as they’re often referred too) Hunter heading off to the New World in pursuit of an Elder Dragon on its crossing. These Dragons are massive creatures that leave destruction in their wake; the Research Commission has deemed it necessary to find out just what the heck they’re doing on a far off island. After creating your character – and experiencing some horrifying facial expressions and vocal choices – you soon find your peaceful ship ride thrown into chaos as Zorah Magdaros rises out of the ocean depths under you.

What comes next is Monster Hunter’s idea of a tutorial – in this case a basic run down of controls and some in-game concepts – as you climb your way up Magdaros and eventually manage to snag a ride to safety. There you meet the unbelievably rugged and aptly named Field Team Leader and make your way back to Astera to meet up with the rest of your Fiver friends. You’re given some basic early missions involving regaining control of the starting zone and thinning some local monster populations before you get stuck into pursuing Zorah for real to solve the question of the crossing for good. 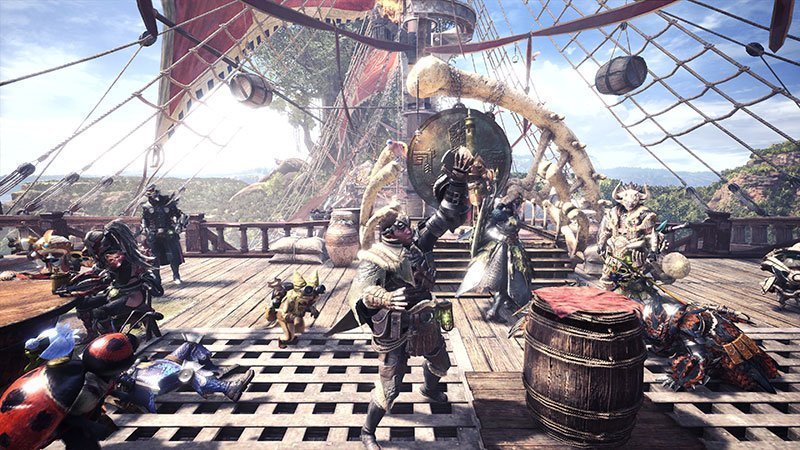 Monster Hunter, even on a first-gen PS4, looks great. The monster design is excellent, and clearly inspired by the relatively recent revelation that most dinosaurs were, in fact, feathered. You can tell from the moment you first see the chicken-like Kulu-Ya-Ku that it will be a trouble maker, and a brief glance at the Tobi-Kadachi is all it takes to tell it will use some kind of shock attack. The Pukei-Pukei in particular is a wonderful blend of chicken and chameleon with a powerful poison attack that is a highlight of the early quests.

The overall aesthetic of World is excellent too, ranging from the soundtrack that’s able to blend into the background or punctuate fights as needed, to the fantasy setting and the hub of Astera, a township built entirely out of the old ships of the previous fleets. It’s a pleasure exploring the vivid greenery of the Ancient Forest and a stark contrast to the barren and muddy Wildspire Wastes.

The broad variety of weapons available in World means you’re sure to find something that suits your playstyle too. To aid you in your pursuits you have a range of 14 different weapons, from the standards of the bow or sword and shield to the out there Gunlance and Bagpipe. Each of these weapon archetypes has a unique set of moves to master, and you’re able to build on those base weapons to increase their attack power, add elemental damage or even just make them look cooler. 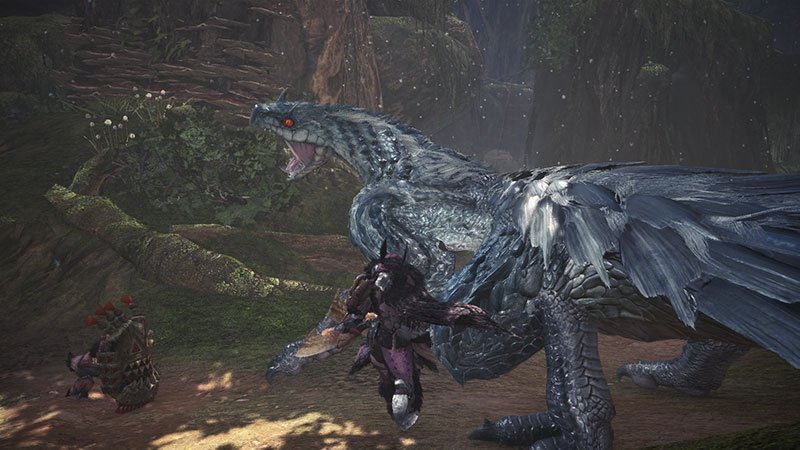 Armour choices are important as well, with different sets giving you different general bonuses – such as more defence or poison resistance – as well as some less obvious buffs too. Some include additions to attack power or health, while others make your items last longer or let you cook faster. As you defeat more monsters you gain access to more and more armour sets and weapon variations, with the primary resources used to make them all gathered from that monster type. It’s here that the extreme depth can be found in the Monster Hunter series as you spend hours grinding monsters to dust for a few scales or a poison sack just to give you the edge in your next hunt.

Those edges are important too, as you’ll undoubtedly hit speed bumps as apex predators – the toughest monsters in each zone – are a genuine challenge. This is also where the fabled vertical learning curve of the Monster Hunter series rears its ugly head. Before we get to that though, a disclaimer: I got stuck — badly stuck — on the Anjanath fight, around eight hours in. I haven’t been able to pass it, and wasn’t able to find other players to make it easier for me either as the servers have been practically empty during the review period.

There’s no way to sugarcoat this – the combat in Monster Hunter: World sucks. It just plain sucks. For a game that’s entirely based around hitting big things with slightly smaller, sharper things you’d think that this would be a vital aspect to get right; instead, it’s frustrating. As with most people, the majority of my TPP-ARPG experience comes from the Dark Souls series, one that practically coined the term hit-box porn with its tight, responsive and accurate combat. If you swing at something and it looks like you should hit it, you’ll hit it. This isn’t the case with MH:W. 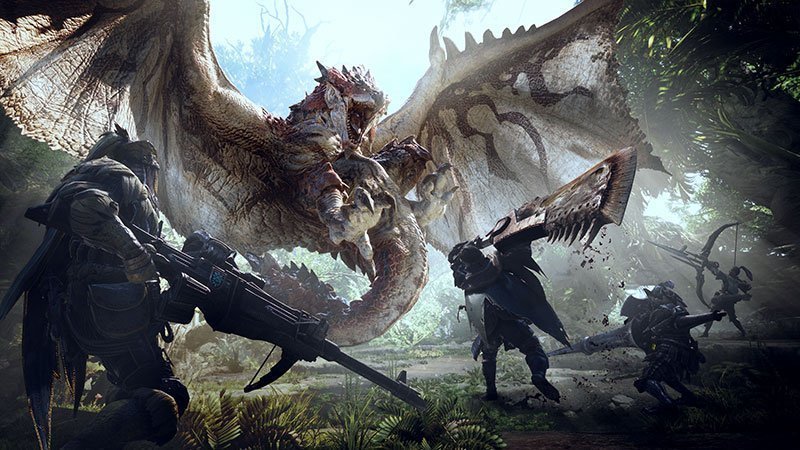 Instead, MH:W expects pinpoint precision from each swing; god help you if you queue up a combo and the monster moves. Your sword feels weighty too — the great sword in particular has animations that befit its sheer size — but it still hits like a pool noodle. Couple that with the fact that your weapon feels like it has the smallest, thinnest hit-box while the monster can flail its attacks in large zones and still make contact and you’re left annoyed and dead once more. I can understand why this may be the case — balance comes to mind — but that’s no excuse for a clunky control scheme and produces thoroughly unrewarding combat overall.

It’s not like each hunt is quick either, with most of mine ranging between 15 minutes way up to 25 for some of the tougher monsters. This time is filled with dodging attacks, unloading on the monster, having it inevitably move on the second swing of your combo, missing the next two hits and then dodging to not get smacked up yourself. In the end I turned to the good old bow, but that leaves you with little defence for any attack that does make it through. Even while hitting the monster in its weak spot as often as possible the fight is still drawn out as the monster disengages and runs away. Most opponents will do this multiple times across a fight, leaving you with no choice but to put your weapon away and chase after it as the spirit flies guide you.

The cluttered and decidedly unfriendly UI only makes matters worse as you’re bombarded with information you don’t necessarily need over essential tidbits. Like, you know, a health bar for the monster. While you can tell how a monster is fairing from physical indicators such as scratches and cuts, it’s simply not enough to tell how well you’re doing until the monster is physically limping. Menus are busy and tough to navigate in a pinch, with even the radial menus — the ones designed to be easy to access — quickly causing frustration. 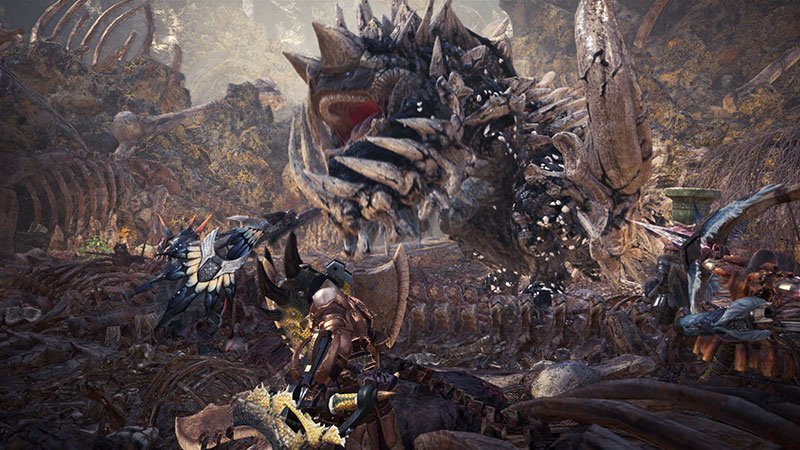 This is a game I want to like. I love the world of World. I love the art style, the design – heck, I even love the kooky cutscenes such as when the Palico (see: cats) cook a meal for you. While there is amazing stuff around the peripheral, I just can’t forgive flaws with World‘s core — intentionally frustrating combat and horrible UI design. If you’re already a fan of the series though, I have a feeling you’re overlook these flaws and love the overall package. It builds on titles before it and introduces a tonne of other quality of life bumps like easier matchmaking and no loading between zones. If you’re new to the series though, you’d better be dedicated as this takes a long time to learn, and longer to master.

In the end, Capcom hasn’t built this game for me. It’s hard and frustrating… but for some, that’s exactly what they want. While it may be more accessible to newcomers, this is still a Monster Hunter game made for the series’ faithful. Players who have invested thousands of hours into the previous games, grinding armour sets and mastering move sets to slay all manner of monsters will find themselves feeling right at home. While it didn’t work for me, it’s evident that Capcom has done its best to welcome new players without compromising on the experience for its hardcore players — unlike other recent titles.

Monster Hunter: World was reviewed using a promotional code on PS4, as provided by the publisher. Click here to learn more about Stevivor’s scoring scale.

Editor’s note: Just because this is the internet doesn’t mean you can hide behind comments and abuse our authors. This is one person’s take on the game — it’s not meant to be sensationalised and it’s not designed for clicks. Feel free to play the game and think differently, just don’t be a dick about it. All comments are now being removed and no further comments will be accepted.