A new Xbox Wireless Headset is available to consumers later today, and Stevivor’s already put it through its paces.

Priced at $149.95 AUD, the wireless headset connects with your Xbox console of choice — be that an Xbox One, Xbox Series S or Xbox Series X — alongside Bluetooth pairing with your mobile or PC.

A simple matte black, the unit features Xbox green highlights on each of its earcups and a recessed Xbox logo on the right-hand side. A single green button is tucked behind the left earcup and functions as both a power and pairing button depending on your need — complete with an Xbox Series startup chime when you turn it on — while a small microphone manual muting button sits at the base of the headset’s adjustable microphone. Said mic can be tucked around the earcup when not in use and a small LED at its end indicates when it is broadcasting.

Both earcups will allow you to control audio in one way or the other; the left-hand earcup can be twisted towards your display to increase the balance of game audio over chat audio, or away for the reverse. The right-hand earcup is all about volume control, increasing volume when twisted towards your display and reducing it in the opposite direction. The headset allows you to pair with your Xbox and a secondary Bluetooth device at the same time; when this is in play, the right-hand volume control increases and decreases both sources evenly. In that situation, you can use your Xbox’s on-screen audio controls or your PC or mobile’s volume to tweak those individually.

The headset is extremely light overall (clocking in at just 321 grams), with polyurethane leather earcups that are large enough to fit my ridiculously-sized ears. I usually find that most headset earcups actually sit against my lobes, but these provide a little breathing room and mean that I can wear them for hours-long stretches without discomfort. Strangely, the unit’s adjustable headband needs to be fully extended to provide that comfortable fit, and while I have giant ears I don’t have a very large cranium. It’s an interesting mix, there. 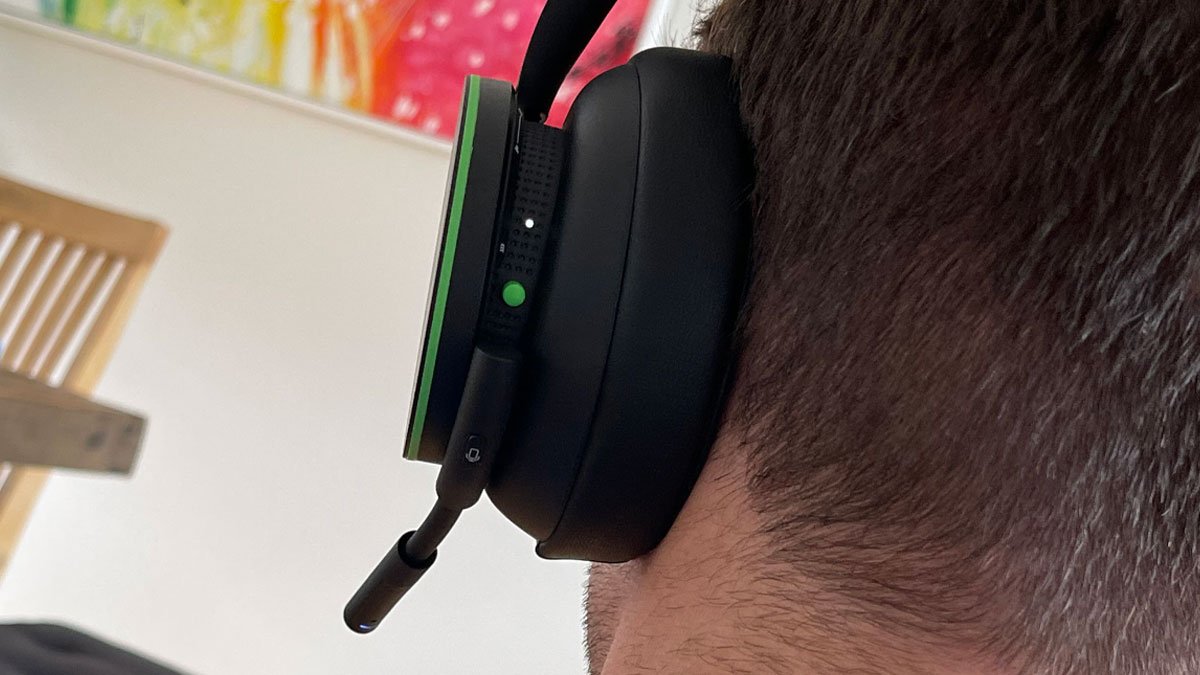 The adjustable mic doesn’t jut out very far from the left earcup but provides some exceptional audio quality. The manual muting button is easy to find when the headset is on (as is the power/pairing button), though I opted to use the headset’s auto-mute feature most of the time rather than manually muting myself. The auto-mute feature can be toggled on Xbox using the Xbox Accessories app, with different levels of monitoring to meet your needs. That same Accessories app also provides several equaliser presets, bass boost, the ability to dim its LEDs, and more. I’m no audiophile, but Microsoft confirmed that the headset offers “rich bass responses tailored by our acoustics team, with smoother mid and high frequencies thanks to the 40mm drivers we selected.”

I opted to try the headset’s spatial sound (offered in games such as Ori and the Will of the Wisps, Cyberpunk 2077, Call of Duty Warzone, Borderlands 3, Tom Clancy’s The Division 2, Resident Evil 2, Metro Exodus, Forza Horizon 4 and Gears 5) by using a Dolby Atmos trial that comes free with the unit and lasts until 30 September 2021. The easiest way to activate the trial is to head into the Xbox’s Settings app, and then select Dolby Atmos for Headphones, which in turn will prompt you to download the Dolby Access app.

The app itself lets you customise game and movie preferences alongside the opporunity to create our own profiles. A reminder of your trial appears inside the top-right corner of the app; after that trial is up, you’ll have to pony up some cash (or just switch over to Windows Sonic for free). Paired with a bit of bass boost, I found the quality of sound coming from the likes of Gears 5 to be rich and rumbling, befitting of the game itself. I also sneakily mixed a Zoom call on PC with Hitman 3 at one point and loved the flexibility I was able to experience as a result. Just don’t tell my day job.

The headset came in hot late Friday night, which meant I only got about ten hours of gaming, Zoom calls and podcasts in before writing this review. The Xbox Accessories app says my battery level is at medium; Microsoft itself says the unit will provide up to 15 hours of life with one charge. When depleted, the headset is said to take 3 hours of charging to fully refill; a 30 minute quick-charge will provide enough juice for up to four hours of use.

A 14″ USB-C cable is provided with the headset in order to charge and connects behind the right-side earcup, but Microsoft does note that users must “use a compatible USB-C cable (sold separately) to configure audio settings in the Xbox Accessories App on a Windows 10 PC,” so the provided cable seemingly doesn’t cut it.

All up, the Xbox Wireless Headset is a low-price, high-quality device for those who primarily game on Xbox. Paired with Dolby Atmos, I find it produces better sound than my trusty (ie: aging) Astro A10s while also proving far more comfortable to my large ears. As such, I’d highly recommend them to anyone looking for a new set of cans.

The Xbox Wireless Headset was reviewed using a promotional unit on Windows PC, Xbox Series X and iOS, as provided by the publisher. Click here to learn more about Stevivor’s scoring scale.