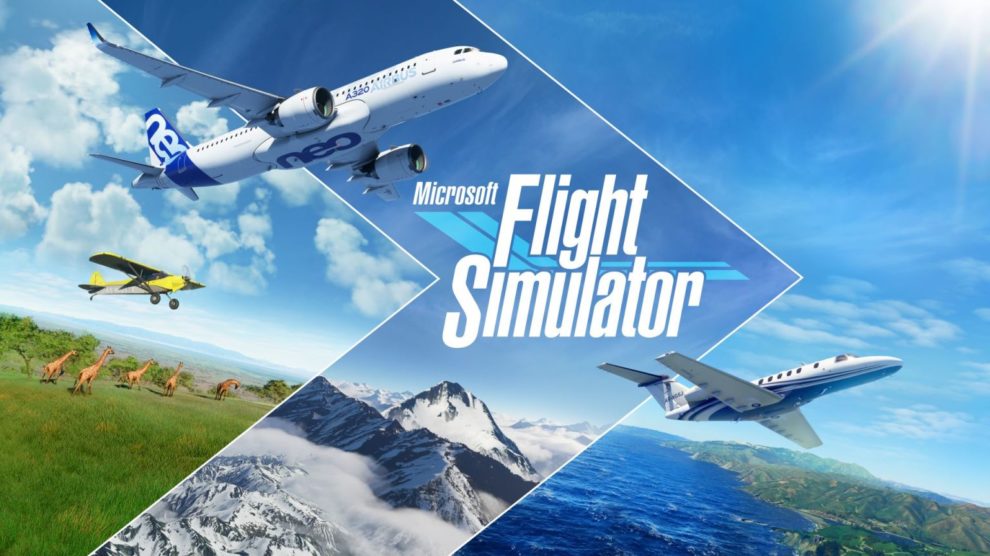 The first current-gen game unlike anything possible on consoles before.

Microsoft Flight Simulator on Xbox Series X and S is the first current-gen game that feels like it would have been impossible last-gen. It not only looks like a current-gen exclusive – it’s the first game that plays like one all the time. There’s a touch of irony that its arrival on consoles is so late that its original PC departure occurred last-generation, but there’s no way the Xbox One could have delivered any version of Flight Simulator as we know it.

Our original PC review detailed the brilliance of Flight Simulator as a welcome escape amidst a global pandemic. Almost a year later, sadly, that still stands. This is the first time I’ve flown anywhere since January 2020, and I suspect it’ll be my only foray into international travel for a long while. Everything in our PC review still stands, so read on for specifics on the Xbox version.

Now that I’m embroiled in a battle for supremacy regarding the first game that truly feels current-gen, the championship bout is clearly a matchup between Microsoft Flight Simulator and Ratchet and Clank Rift Apart. The trophy was earned by the latter, as it did come first and looks like a proper current-gen exclusive amid a sea of cross-gen. However, I can envision a version of that running on PS4, had it been released late last-generation instead. It certainly would have been a lesser game, as the visuals would take a dip, and the benefits of the SSD would be lost, which would have diminished the dimensional jumping, but the core of the gameplay would have remained.

No amount of visual tinkering, increased loading times or omission of a central gameplay hook would allow Flight Simulator to run last-generation. Top to bottom, this not only looks like a current-gen exclusive, it opens up new gameplay that wouldn’t have been possible on dusty old last-gen consoles. 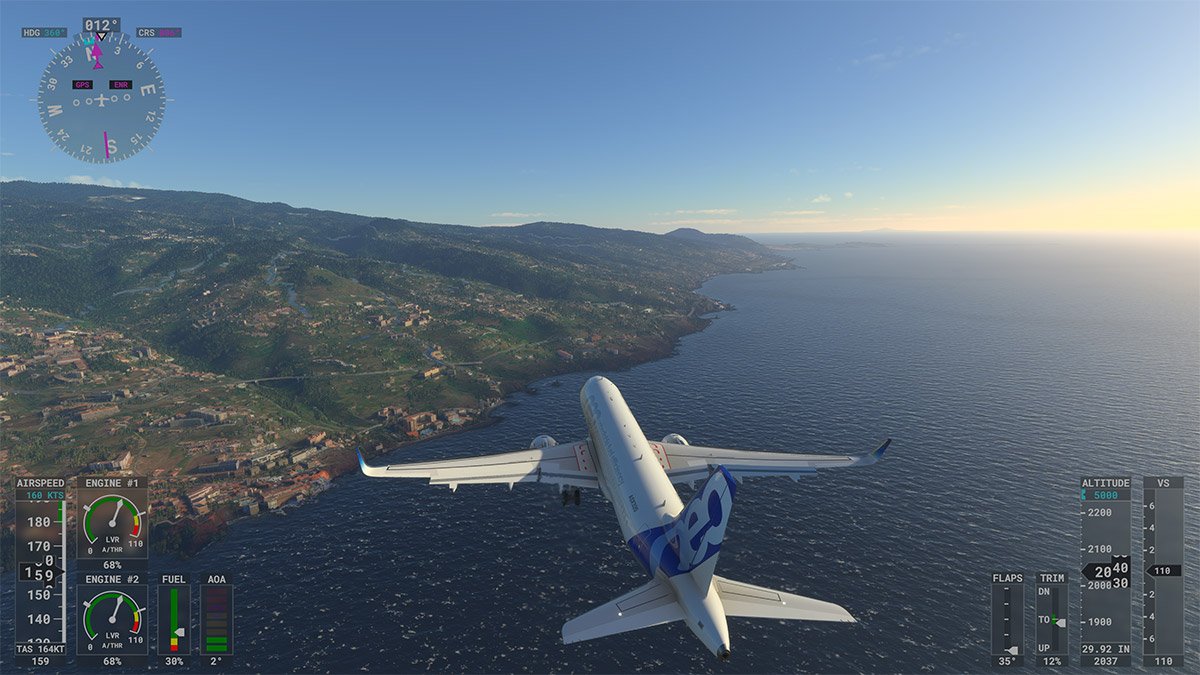 If you missed the plethora of PC awards last-gen, Flight Simulator allows you to fly anywhere in the world. It’s still astounding that I can fly over – and accidentally crash into – my own house 25 minutes out of Adelaide, before teleporting to overfly the Sydney Opera House, Central Park or Mount Everest. As a long-time console gamer, it’s the expansive world I have always dreamed of, but never thought would be possible on a AUD $499/$749 box connected to my TV.

Playing with the offline data pack installed, the speed of the SSD is crucial to loading the world while you hurl overhead at anywhere from 100 – 950 km/h in a range of aircraft. But that’s only a small part of the package. Should you have won the NBN lottery and scored a reliable high-speed internet connection, the default online data mode pulls higher quality assets in real time, recreating the world as you fly past. Everything from the world itself, to the current real life weather and air traffic can be streamed live and presented on your Xbox. The scope of the world, the option to stream assets or use pre-generated alternatives and the realistic handling of extremely complicated machines is astonishing on a console – and it all runs smoothly, for the most part.

Considering how demanding Flight Simulator is to run, pushing the beefiest of gaming machines and flat our refusing to run on the average family PC (does that still exist?), it mostly runs like a hot knife through butter in a stable 30 frames-per-second in 4K on Series X and 1080p on Series S. If you’re lucky enough to have invested in a HDMI 2.1 display with VRR support, Flight Simulator automatically unlocks that 30 cap to run unrestricted, letting your screen manage the inconsistencies. 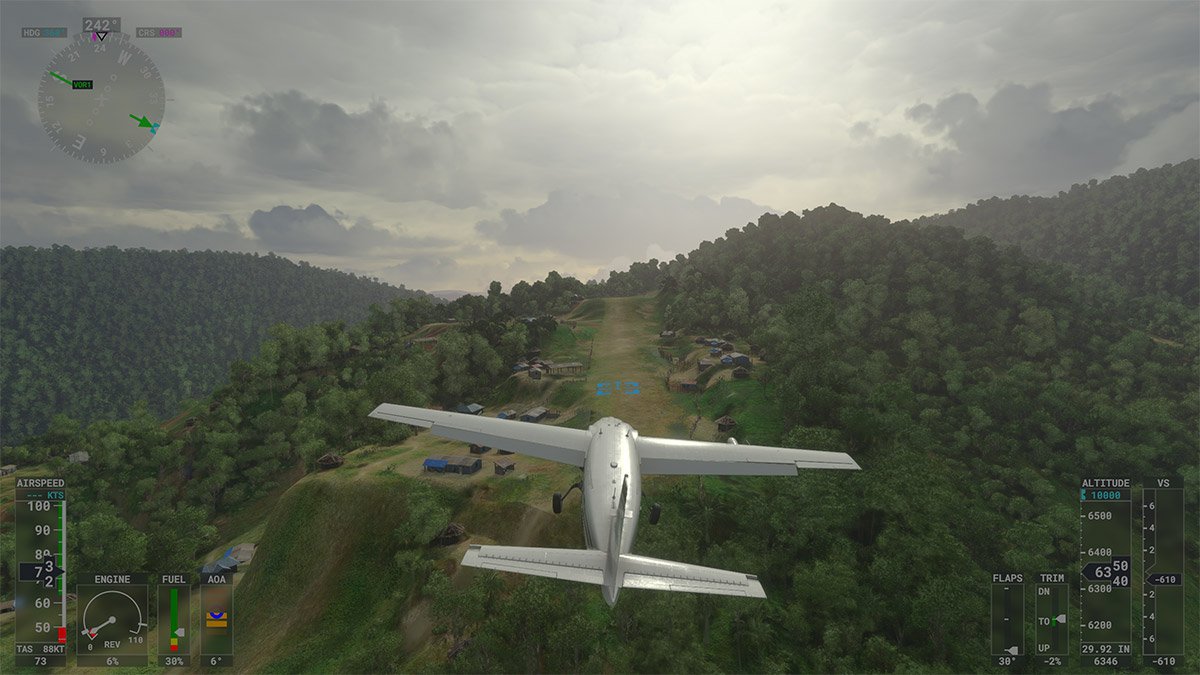 Most of your time with Flight Simulator will be determining your own routes and beginning at take-off, either at the gate or ready for departure on the runway. Alternatively, scenic flights around global icons and landing challenges get you straight into captain’s seat. These are a more active starting point, but are where I found the Series X to momentarily struggle.

Starting on the ground, I have nearly always had a very stable experience, but in these pre-determined scenarios that begin mid-flight, I had some stuttering almost every time, both online and offline. These wobbles and micro-freezes were most prevalent at the very beginning, likely while the game determined all of the variables that affect flight. Overall, the stuttering was minor, but as these modes were my first port of call, I was reminded early that the Xbox Series X is seemingly being pushed to its limit to deliver the world on a truly global scale.

For most players, Flight Simulator is simply very pretty. I’ve enjoyed setting a heading, engaging the autopilot, and watching the world go by; while the real world around me stands still in lockdown. It looks amazing. But there is so much more going on beneath the surface, which is why this experience wouldn’t have been possible last-generation. 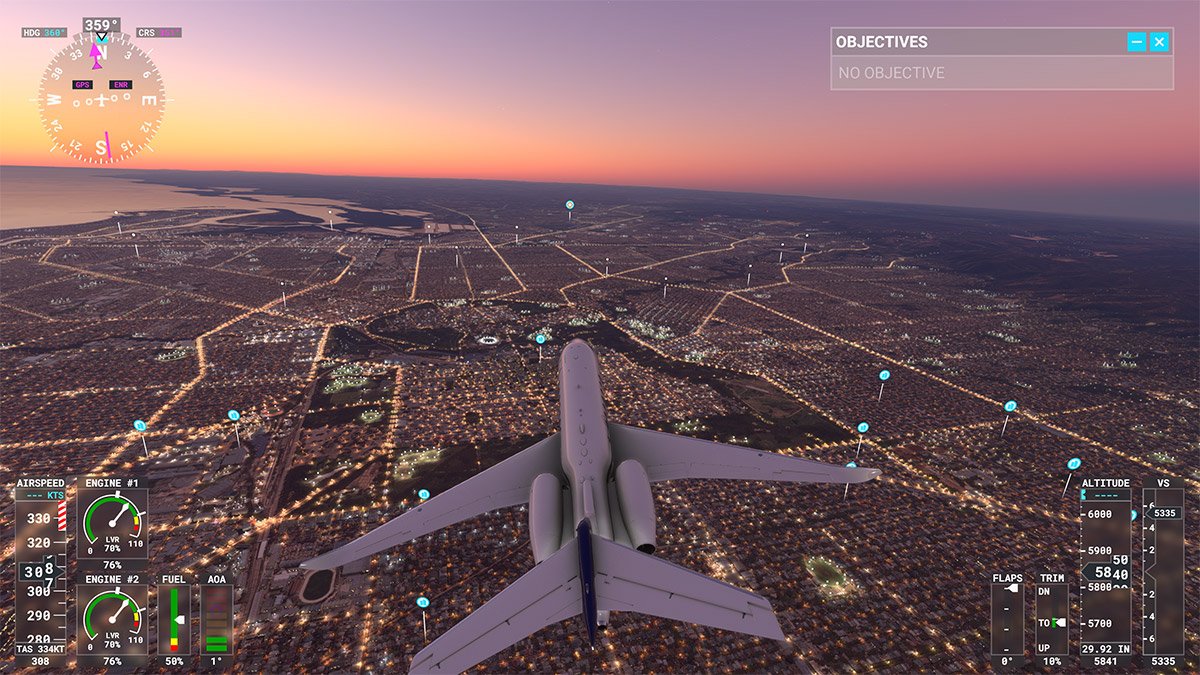 These are deeply complicated machines and Flight Simulator recreates the real world variables on the fly. Unless you bypass the real world weather and conditions and purposely set the scene, a flight from Adelaide to Melbourne might follow the same route, but will never be exactly the same. It does it so well that most players will never notice everything that’s going on, and instead simply admire the view.

Detailed accessibility options see Flight Simulator adapt remarkably well from the freedom of a keyboard and mouse to the simplicity of a controller. With assists turned on, you can let the AI handle most of the grunt work; taking off in an Airbus A320neo or Boeing 787 Dreamliner is as easy a holding down the A button and gently leaning back on the left stick. If you follow the recommendations and start with a light aircraft, you’ll master the basics of flying in no time.

There is an abundance of customisation options to slowly disable those assists and take more control of the aircraft. Much like a real pilot, should you invest the flight time, you’ll eventually master full control of smaller planes, before eventually learning to turn on more automation within larger aircrafts. 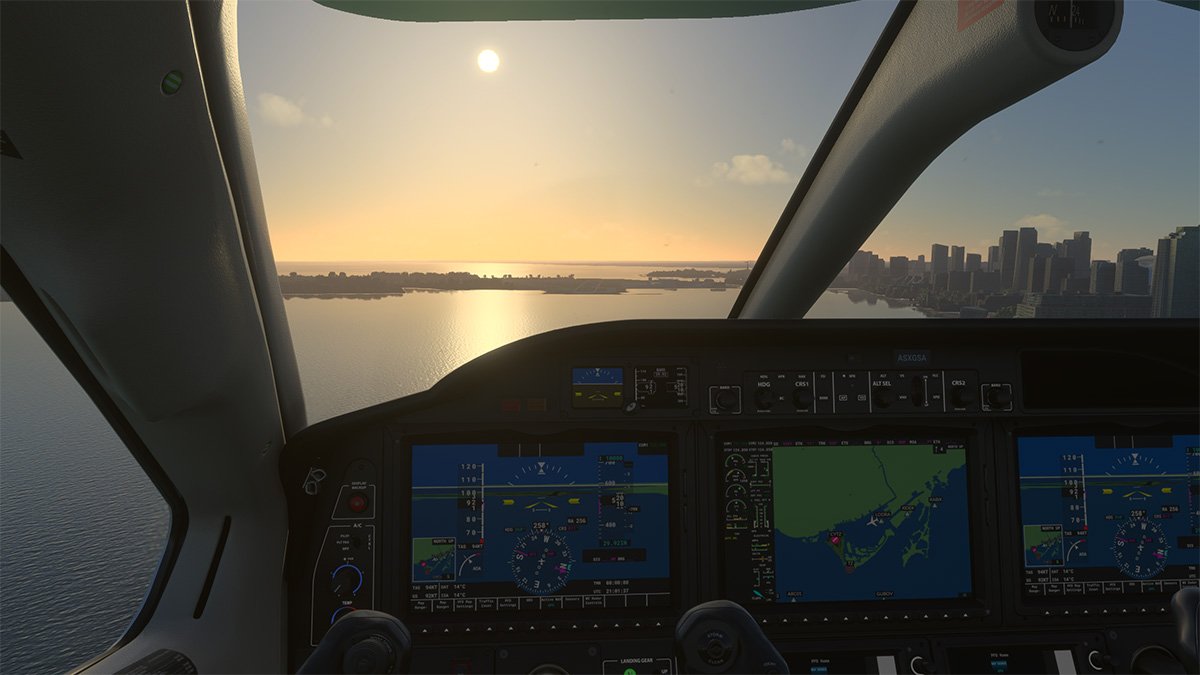 On Xbox, Flight Simulator is clearly still a PC game that’s arrived in your livingroom. Our pre-release build launched with a mouse in the top left corner, before it transformed into a circular pointer. That’s used to make menu selections and to cover for the lack of buttons, should you wish to take more manual control of an aircraft – although a keyboard and mouse or dedicated flight stick can be connected to the console.

In cockpit view, pressing the left stick enables the pointer and allows you to select, view and interact with fight controls. With the cursor enabled, the AI automatically takes over flying, like a co-pilot, following your flight plan (or just staying airborne if you failed to enter one). The AI automatically taking over is kind of like an anytime, any plane, autopilot; but rest assured, flying enthusiasts, proper autopilot is also an option, and behaves as you would expect in each aircraft.

Even on a 65” TV, there is a stark difference to playing from a distance on a couch and burying your face in a PC monitor. The complicated flight instruments are quite small and hard to read on a TV screen, which does make it harder to play in this view compared to PC. Holding LB opens a range of camera options, including a free camera which I often used to get up close to an instrument. But for the most part, I got around this visual challenge by using the external camera, where most of the key instruments are displayed easily visible outside of the aircraft. Considering it’s a little harder to see small details on a TV screen, some new tutorials specifically for console players could have helped players familiarise themselves with controls they may be more likely to overlook. 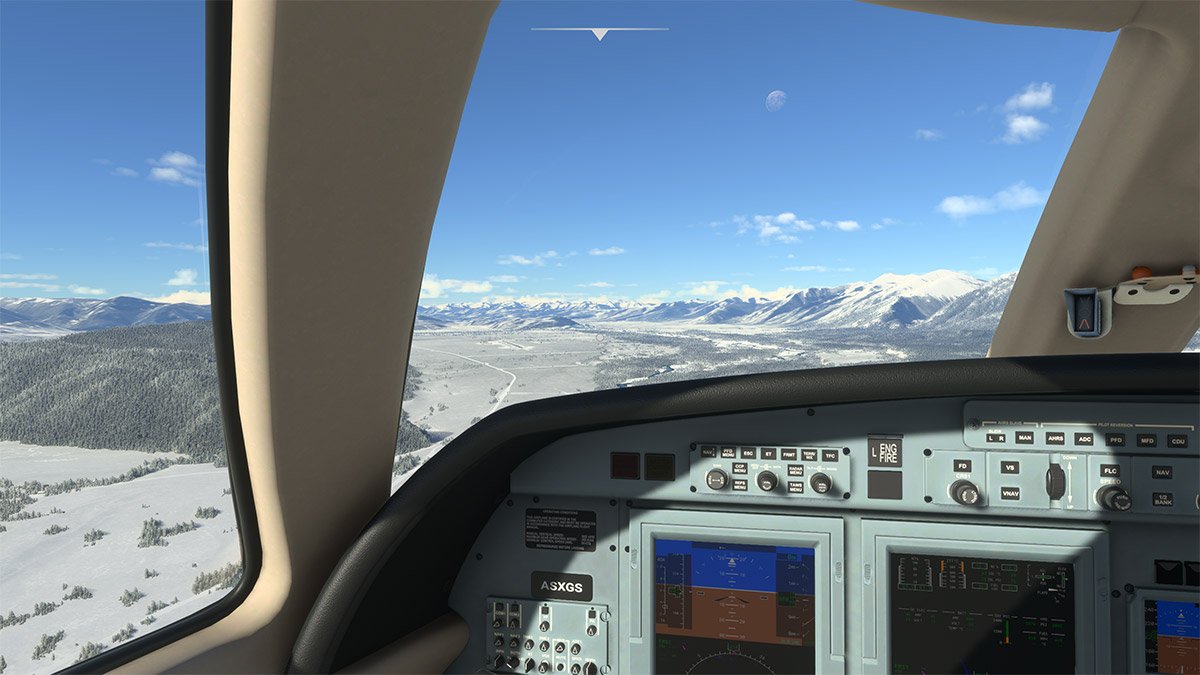 Microsoft Flight Simulator is a marvel running on Xbox Series X and S. This is an ambitious game that really should be restricted to high-end PCs, but Asobo Studio has defied the odds to craft a well optimised console version that delivers the full simulation experience. If you want a punishingly accurate simulation of flying a passenger jet, while that remains fully intact on Xbox, Flight Simulator is best suited to a keyboard and mouse with a monitor. But if you prefer to relax and experience the joy of flying anywhere around the world, without having to worry about how your hardware will manage such an ambitious project, Flight Simulator on Xbox Series X and S is marvel to behold. It might not be that easy to read a cockpit flight plan while lounging on the couch, but it’s a stunning way to watch the world go by with Microsoft Flight Simulator on Xbox.