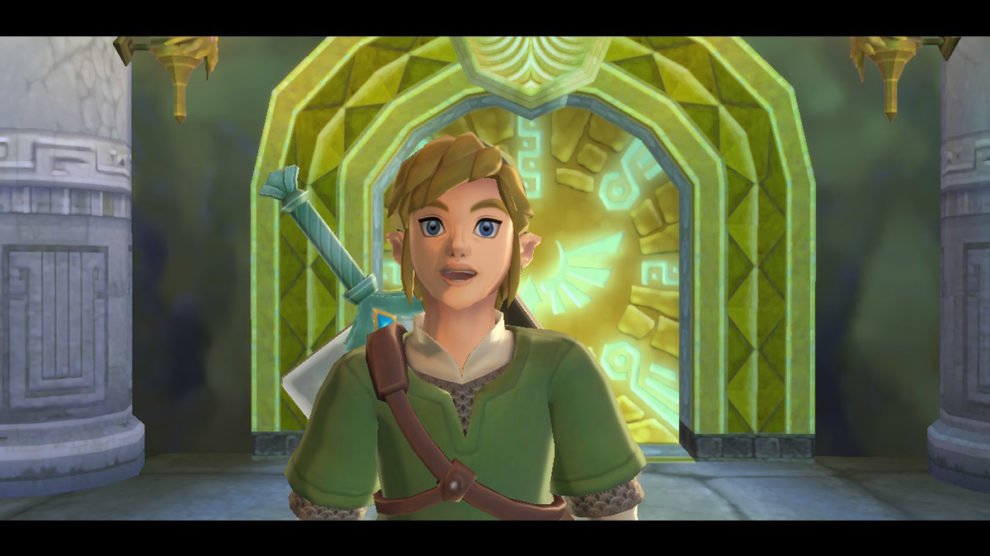 Nintendo proves its own deeply ingrained motion controls can work even better with buttons.

Skyward Sword, often the forgotten child when reminiscing about The Legend of Zelda’s 3D catalogue, is the last in line to be given a makeover. Anchored with motion controls that finally delivered the original promise of the Wii – requiring the MotionPlus add-on – it seemed destined to be confined to outdated hardware forever, whereas the other 3D Zelda games had easily managed to jump between generations. To celebrate the series’ 35th anniversary, Nintendo has freed Skyward Sword from the confines of motion controls and its SD origins, and delivered a version that can be played as originally intended, or with a much more conventional control scheme.

Straight off the bat, the motion controls still work well with JoyCons, but they are a lot of work. Of the illustrious bunch of 3D Zelda games, Skyward Sword is the only one that felt like a chore during my original run; and it was largely because of the physicality and frustration of the controls. They did what most other games on Wii failed to achieve, and that was deliver a deep-seated control scheme that was harmoniously entwined with the gameplay mechanics, world design and even the narrative. But it was hard work over 40 hours, and I found myself picking up something better suited to slumping in the couch until I forced myself to power through across a couple of weekends.

Skyward Sword HD rectifies that problem for lazy sods like me. I’ve played both on TV and in handheld mode, and the button controls make Link’s last traditionally scripted adventure much more engrossing. Whereas the waggling Wii version had me putting down the controller after short bursts, I’ve happily played the HD remaster until my Switch’s battery has died. As well as making the game more natural to play, they’re also more reliable. Even with MotionPlus, the Wii didn’t always accurately track your gestures to the precision Skyward Sword demands — there is still the odd frustrating moment where Link doesn’t respond as you expect, especially in combat, but it’s far less common using conventional controls.

The remastered controls do a great job of keeping the original game design, while mapping to normal buttons. If you didn’t play the original a decade ago, Skyward Sword’s point of difference was the obsessive emphasis bestowed upon Link’s sword. It was controlled with the Wii Remote in your right-hand, matching your inputs close enough one-to-one. If you swung left, Link sliced to the left; if you hacked down, his blade would plunge to the ground. Enemies and boss battles were all created with this crucial mechanic in mind, as were puzzles and even general environmental encounters. The entire game revolves around the orientation of Link’s sword.

While you can still swing a JoyCon, it has all been mapped to the right stick relatively faithfully. It’s actually easier to make subtle alterations with a control stick, rather than a bulky controller. The pointer motion controls can still be used for aiming weapons and items. That can be enabled while in button control mode or turned off and all that can be assigned to a control stick — again, offering more precision. The sword mechanics are so deeply ingrained that you’ll get used to them, but they’ll never become second nature. It’s just so different in a game that otherwise feels very familiar, and that’s hard to completely wrap your head around. For the first three or four hours I defaulted to wanting to press A to attack middling enemies, and even then, I really had to think about how to attack them using the right stick instead. The controls work really well, and make Skyward Sword much easier to play, but they still take more conscious thought than most games.

The other quality of life improvements are less obvious, but still improve the overall experience. There is a new manual free camera system, alongside the more automated Z-targeting, which allows you to finally look in any direction; especially handy during climbing and jumping sections or boss battles. As the right stick is reserved for combat controls, you need to hold down L and then use the right stick to adjust the camera. Like the swordplay, it’s unusual and conflicts with your instinct, but is a very workable solution that makes exploration much friendlier.

Other tweaks largely focus on improving the pacing issues that have long been associated with Skyward Sword. From the opening tutorial, to item descriptions and Fi’s constant nagging, Skyward Sword has reduced the mandatory text and given you more autonomy. If you want help, you can always ask Fi for guidance, but it’s no longer a mandatory interruption. 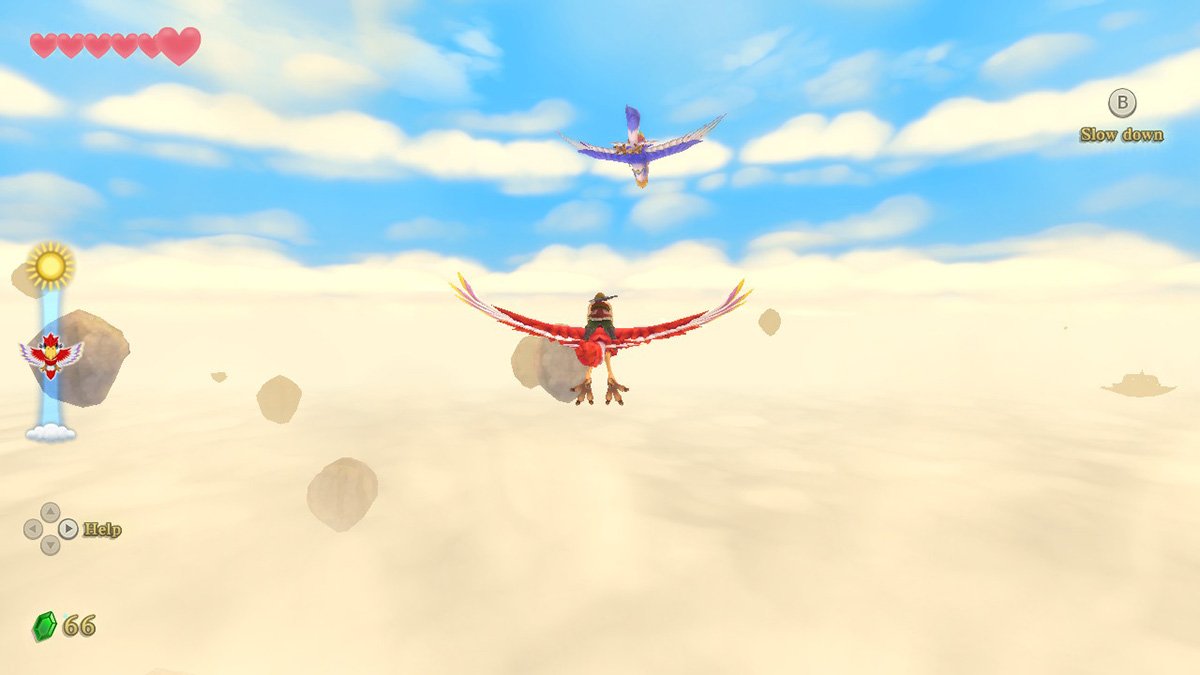 It’s all fairly minor, but enough to make Skyward Sword HD flow much better. The only negative is locking additional fast travelling options behind a $35 amiibo. I wouldn’t mind if that unlocked health or even a special new potion, but gameplay improvements to a remaster should be included for everyone. It’s a really disappointing decision.

The improvements are all much appreciated, but there could have been more. The lack of a proper quest log is still a point of pain, especially in a game that runs 30-40 hours and wants you to embark upon optional side quests. The main storyline is easier to follow, as the dowsing mechanic is essentially a time-consuming waypoint. But even that isn’t reliable if you don’t remember where you left off, and it’s almost impossible to track optional missions once you’ve forgotten about them. An easy way to track where you are and what you are doing is an expectation in 2021 — it probably should have been there in 2011.

As Nintendo’s third proper HD remaster – the other two being the previous Zelda games in The Wind Waker and Twilight Princess last-generation – Skyward Sword HD does what it needs to do visually at a minimum. Coming from recently completing the up-resed emulation of Super Mario Galaxy also on Switch, Skyward Sword HD doesn’t look much better as a full remaster. Link and the main cast of characters all look good, but the muted tones and flat murky surfaces don’t come across as impressively as the vibrant colours of Wind Waker’s transition to 1080p on Wii U — at the time in 2013, I thought that could have passed for a new game such was the quality of its visual overhaul, but Skyward Sword HD hasn’t set its sights nearly as high. The game runs well, and I must admit it does look pretty good as a handheld game in 720p, but on the big screen the environments are very dated. It’s a much cleaner version of Skyward Sword in high definition, and no doubt the best way to play, but isn’t the stunning refresh we have grown accustom to from other remasters. 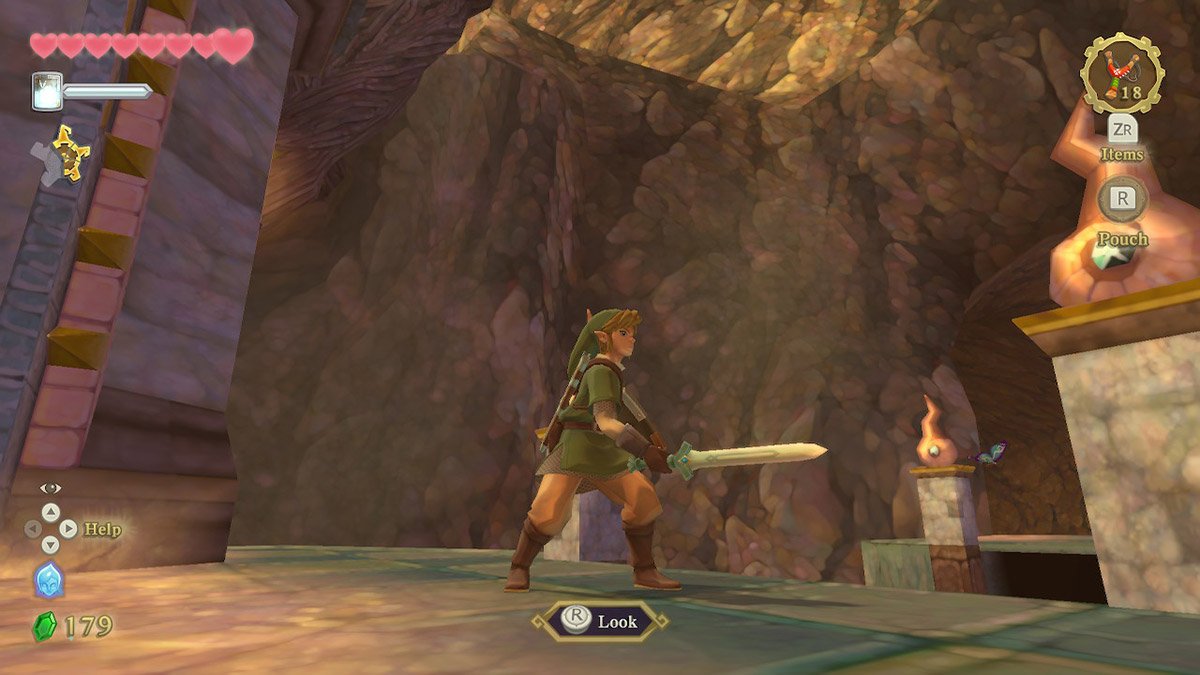 The game itself holds up remarkably well. It was lauded by most critics at launch, but received a more mixed reception by fans shortly after. A decade on, Skyward Sword has consolidated its position as a steppingstone between the tried and tested Zelda formula and the reboot of Breath of the Wild. The seeds were sown here, with the introduction of a stamina gauge and climbing mechanics, along with breakable items, but the narrative pushes you through a more familiar dungeon-conquering structure.

Returning after Breath of the Wild paints Skyward Sword in a new light. We know what’s to come, so it’s more of a nostalgic voyage through how Zelda used to be. The shortcomings are still there, with a lacklustre opening hour (but it has been sped up somewhat), a reliance on fetch quests and backtracking, and occasional fiddly controls, but overall it’s nice to return to classic Zelda with some excellent dungeons.

Skyward Sword followed Ocarina of Time’s playbook closely, but it did away with the predictability of the latest item being used to complete a dungeon and beat the boss, rarely to be used again; the dungeons and most of the boss fights all hold up extremely well because of it. Most of the puzzles are well designed, and even adapted for button controls, they have you thinking outside of the Zelda box – if in doubt, just remember whatever stands before you was designed for Wii MotionPlus, so the solution is all about precise movement. 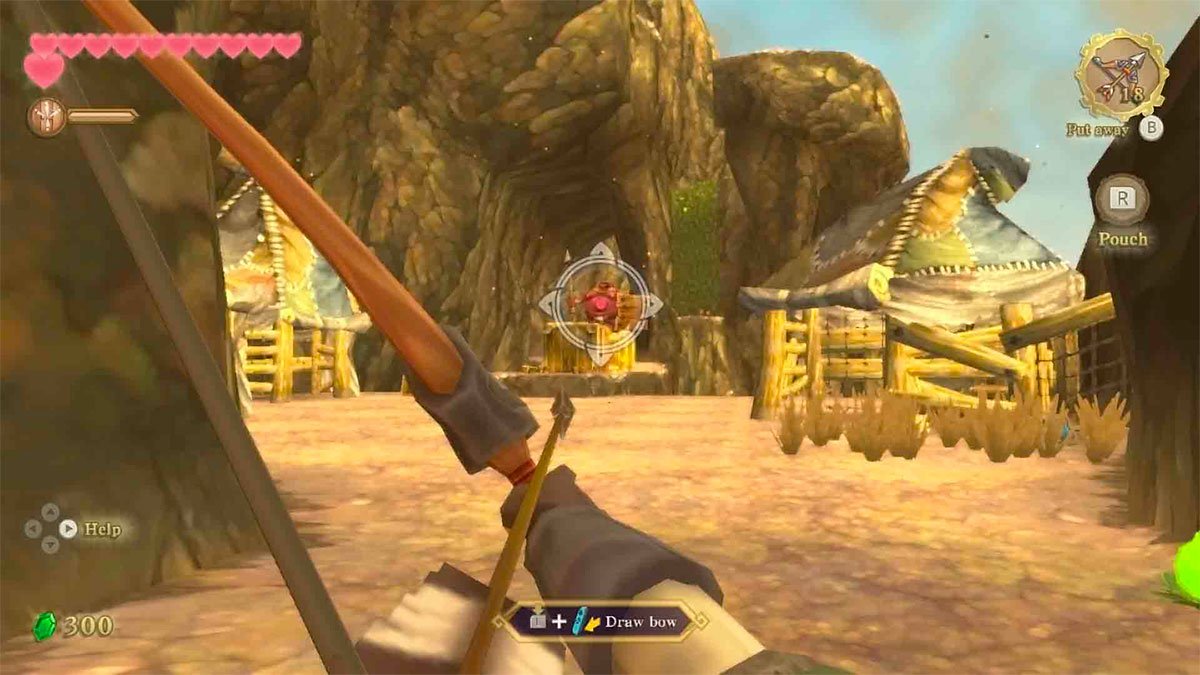 Skyward Sword on Wii was Nintendo’s best argument for not only implementing motion controls in a traditional-style game, but designing gameplay from the ground up around them to deliver a new way to play. A decade later, motion is now an old way to play, largely relegated to a footnote. Skyward Sword HD is a rebuttal that sets out to prove those same innovative mechanics can be applied, and applied well, to conventional button controls.

In doing so, and in conjunction with the improved pacing through some minor appreciated tweaks, The Legend of Zelda: Skyward Sword HD is the most accessible and enjoyable way to play. As a remaster, the characters look good in high definition, but the environments appear dated and could have used more attention. But unlike the previous two Zelda remasters on Wii U, Skyward Sword HD is more about updating a game designed for the Wii’s waggle to work well on a handheld and with a conventional controller. With that focus, it delivers a version of The Legend of Zelda: Skyward Sword that is much easier and more natural to play from start to finish.

The Legend of Zelda: Skyward Sword HD was reviewed using a promotional code on Nintendo Switch as provided by the publisher. Click here to learn more about Stevivor’s scoring scale.