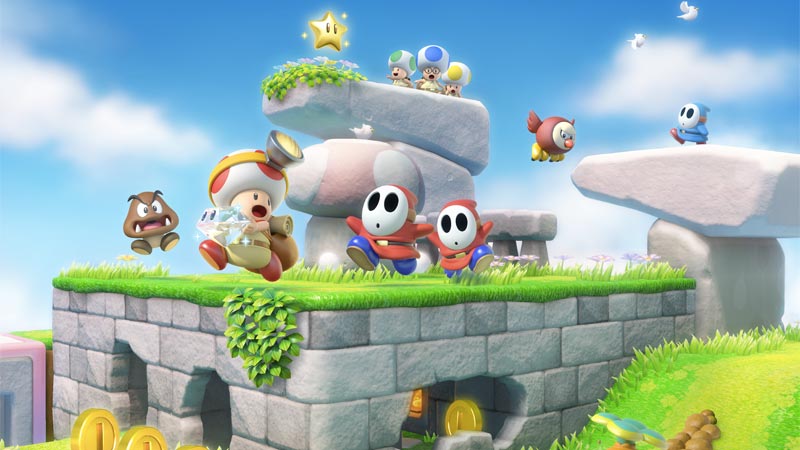 Captain Toad: Treasure Tracker was one of my favourite Wii U games — and four years later it has been dusted off and retooled for a second coming on Switch and, tardily, 3DS. Treasure Tracker was such a great Wii U game because it could be played slowly, in my case over several months, chipping away at a couple of levels now and then and returning without trouble after lengthy interruptions. Too many games become borderline unplayable after a brief absence, but Captain Toad’s simple, smart puzzles make it instinctive to pick-up and play no matter how long you have been away.

If you missed it, and the basic port rather than genuine remaster (let alone sequel) suggests Nintendo thinks there are plenty of you out there, Captain Toad is an exercise in doubling down on a single, strong gameplay element. Mario’s mushroom-top ally finally gets his own adventure, and despite serious limitations unbefitting of a poster-protagonist, the simplicity gives life to some brilliant level design and clever little puzzles. 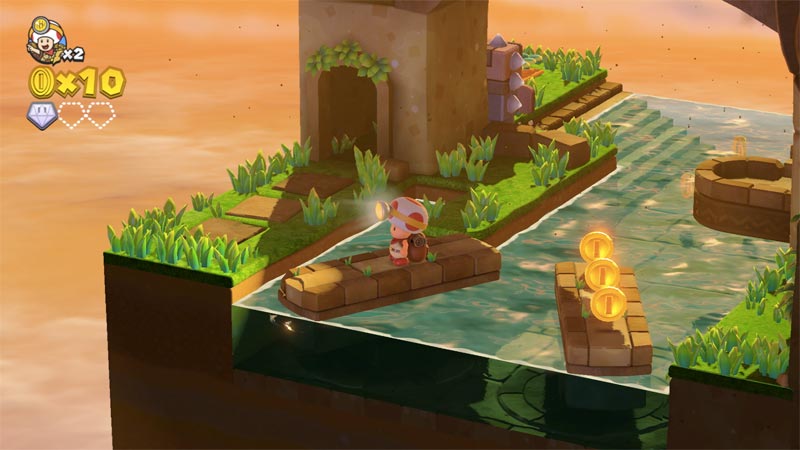 Your job is simple: as Captain Toad, explore a level collecting three, often hidden, gems and as many coins as possible, before retrieving the fairly obvious star to close out the course. The crucial limitation I spoke of is Toad’s inability to jump, forcing clever use of the environment to traverse, dodge or defeat enemies, and explore every nook and cranny to nab each collectible.

The approximately 75 levels, which fit cleverly within a single screen and are explored as much by moving the camera with the right control stick as waddling Toad with the left, all feel fresh and rarely repetitive. The controls are purposely sluggish to match Toad’s leisurely pace, but still come across a little too cumbersome and the camera is too restrictive considering its manual movement is a key component; a couple of minor gripes that remain unchanged as evidence of how this is essentially just the Wii U game on Switch without much consideration of enhancements.

For completionists, there is a unique objective to each level, such as defeat all enemies or avoid using the obvious bridge, and an invitation to revisit and find a hidden pixelated Toad channeling Wally (of Where’s Wally). I’m not normally one of them, but the flipbook level selector compels me to tick all the boxes before moving to the next stage. 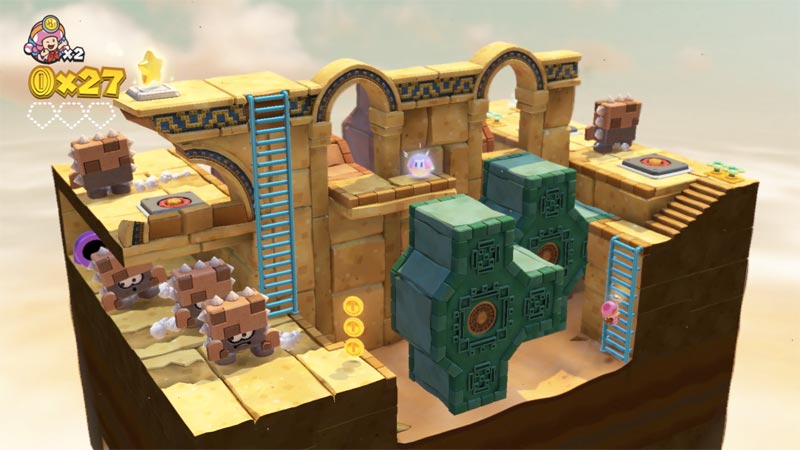 It’s a very simple concept that originated as a mini-game in Super Mario 3D World and genuinely surprised me when it bulked up into a complete, standalone game. The bite-sized levels make it a fantastic handheld game, be it for travelling or as a second screen game on the couch that only commands partial attention, and new mechanics are steadily drip-fed often enough to keep you thinking. It would actually make a great mobile game — but for now, we have a Switch port.

The occasional touch controls make the jump from stylus to direct touch, which is obviously more convenient, and are substituted by the ZR button and a pointer in TV mode. There are four new levels, all based on Super Mario Odyssey, and a fairly pointless two-player mode that splits the Joy-Con in two and gives little brother or sister the nominal task of delivering extra turnips to Player One, who has all of the fun; not something you would bestow upon an actual friend.

That’s it. This isn’t a remaster, it’s a straight up port that looks more or less the same to the naked eye running on Switch or Wii U, with the advantage of a HD screen and proper portability when playing off-TV, as it should be. Captain Toad always felt like a handheld game, and for whatever reason it’s only now been released on 3DS, and that’s why it’s worthy of the Switch second life: it never felt quite right on Wii U, being tethered to a TV you probably weren’t using to play it.

However, like Donkey Kong Country Tropical Freeze, Nintendo has excluded returning players with an high price tag. Captain Toad is allegedly a budget title at (AUD) $60, but effectively the same game on Wii U is currently $36 at EB Games (and half that price on-sale). Unless you have an eidetic memory, it’s worth replaying as a proper handheld game, but it’s hard to justify paying that much a second time to essentially buy four DLC levels and change device.

Around $30 range would have made it much more attractive as a repeat purchase, and I can’t help but feel Nintendo is oblivious to how big that market could be for these lesser known Wii U ports if it actually targeted it — generally speaking, Wii U owners are loyal Nintendo fans who would be willing to double dip, but only if the price is right. The 3DS version, coming four years later, is also a strange decision. In this era of remasters, Nintendo has gone for a straight port and a 240p demaster, and upped the price on both. 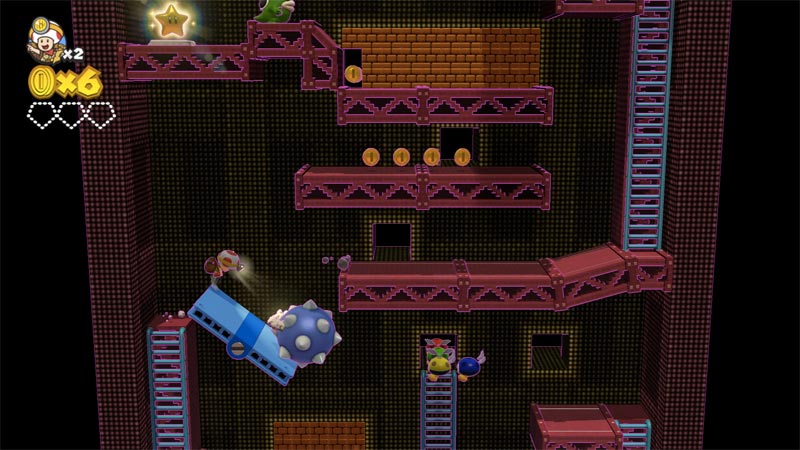 Captain Toad: Treasure Tracker is a clever puzzle game that’s finally found a more suitable home on Switch, as it always felt like a handheld game that played best on the Wii U Gamepad. It’s a collection of bite-sized levels that compel you to tick all of the boxes, and an ideal game to play in short bursts. While the Switch port doesn’t improve much aside from the change in platform, and is too expensive to warrant a repeat purchase, it’s certainly worthy of a re-release for those who missed it last-generation.