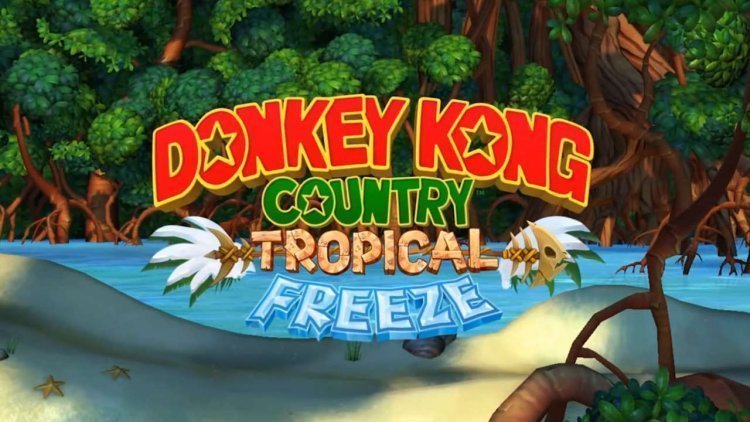 Once more into the jungle.

Donkey Kong Country Tropical Freeze has been re-released by Nintendo, this time appearing on the powerhouse Nintendo Switch. If you missed the title on Wii U, now’s the time to jump in.

As with other Wii U to Switch re-releases, Tropical Freeze benefits from quality of life changes offered by the change in hardware. While it’s great to play in handheld mode, docked mode will result in 1080p, 60fps action, highly recommended if you can swing it.

Perhaps the biggest change to the game is the inclusion of Funky Kong. Offering unique movesets, Funky is also able to skip a level (after dying several times) if it proves too difficult. The trade off there is that you don’t get to keep any progress made in that segment.

Our original Wii U review is below.

I really hope you like dying in video games, cause if you play Donkey Kong Country: Tropical Freeze (and you should), it’s going to happen a lot. Which is exactly as it should be. Donkey Kong Country games are notoriously difficult, and despite the Wii U’s reputation as a kiddie machine or a console for babies, only the most hardened platformer veterans will be able to master Tropical Freeze and uncover all its secrets.

I’ve not had so much fun with my Wii U since launch. Whether that’s an indictment of the Wii U and its current software line-up or high praise for Donkey Kong I’ll let you decide, but either way it doesn’t change just how brilliant DK: Tropical Freeze is. I think part of why I had such a great time with Tropical Freeze is that it feels like it’s Nintendo (or rather, Retro) really letting its hair down. This is a Nintendo game of old; something that feels like it was made during my childhood when Nintendo games were hard and a “Super Guide” was unheard of.

Tropical Freeze is punishing, but not so much that it’s frustrating. Though it has to be said that Tropical Freeze is a very different kind of platformer. Donkey Kong has never been about learning the enemies patterns or getting into a rhythm and Tropical Freeze is no exception. It’s chaos and it’s anarchy. There’s no way to predict the enemy generally and while some timing is required, there’s no real way to “learn” Tropical Freeze.

Getting through a level unscathed requires lightning fast reflexes and an equally sharp mind. Levels can almost be broken down into a number of puzzles. Sections of levels are connected and form a puzzle the must be solved in order to proceed. Get it right and you’ll be on your way. Get it wrong and you’ll hear the sad jingle of doom over and over again.

Tropical Freeze becomes a lot easier once you collect a companion Kong with Diddy, Dixie or Cranky joining Donkey on his quest. On his own DK only has two hearts, so can only take two hits. With a companion the hearts total four, doubling the potential damage to be taken. More importantly though are the special abilities of the companions. Diddy’s jetpack allows DK to hover for a short time and clear further distances, Dixie’s helicopter ponytail lifts DK slightly higher and can be a very handy safety net for those difficult jump and Cranky’s — very Scrooge McDuck-esque — pogo ability allows DK to cross spiked surfaces and climb higher to find hidden areas and collectibles.

I generally chose Dixie Kong during levels and Diddy Kong during boss battles. Cranky Kong is handy, but more so for finding secrets and less for reaching the end of a level. He definitely has his place and is a welcome addition to the game, but fills a very specific niche.

Boss battles are Tropical Freeze’s greatest strength. Ramping up the difficulty even higher than the standard levels, bosses are extended affairs. Rather than the standard 3-hit pattern of most boss battles, those in Tropical Freeze are multi-faceted. Just when I thought I had a boss figured out they’d change up their attacks and I’d be struggling just to survive let alone take them out. Some of the later bosses are particularly devious, but the satisfaction I felt when I figured them out was as rewarding as any puzzle game I’ve ever played.

Tropical Freeze makes it clear that the Wii U can produce some jaw dropping visuals. For an essentially 2D game it’s more alive, filled with more character and more visually impressive than most games. The backgrounds of each level are brimming with characters, enemies and animals going about their business or preparing a new trap or challenge for the heroic Kongs. Water falls, sunsets, factories and more are all brought to life in incredible detail, but the real stars of the show are the Kongs. DK especially is more alive than ever. His fur moves and sways in the breeze and with movement and his face is emoting almost constantly. The same can be said of the other three Kongs, but since they get less screen time, DK is the real hero.

Level design makes use of the living, breathing world that Retro has created. Levels shift between the foreground, background, underground and above ground. Gameplay shifts regularly and keeps players on their toes. More than once I found myself staring off into a level’s background only to find myself there a few minutes later. On the whole, level design is almost flawless. It’s platforming at its best and fans of the genre will be delighted with the thoughtful levels that truly offer a new and exciting challenge.

Rounding out the complete package that is Tropical Freeze is the soundtrack. The music and sound effects are pure Donkey Kong Country and will have fans and newcomers alike nodding their heads and tapping their feet. The sounds are infectious and I found myself humming and whistling the tunes long after having stopped playing. A friend even learned and sang along with the jingle every time I died, much to my chagrin. The music, graphics and characters are the sum that equals an incredible game world and fantastically realised game.

Do you own a Wii U? If yes, go out and get Donkey Kong: Tropical Freeze immediately. If you don’t own a Wii U, now’s the time to seriously consider investing in one. With Tropical Freeze, Donkey Kong and pals take back the platforming crown with aplomb. You’ll not likely find a fun and as challenging game that only wants to entertain for some time to come. Once again Nintendo shows why they are the masters of the genre and why they most definitely shouldn’t be counted out just yet.

Donkey Kong: Tropical Freeze was reviewed using a promotional code on Wii U and Switch, as provided by the publisher. Click here to learn more about Stevivor’s scoring scale. Our original review appeared on 25 February 2014.