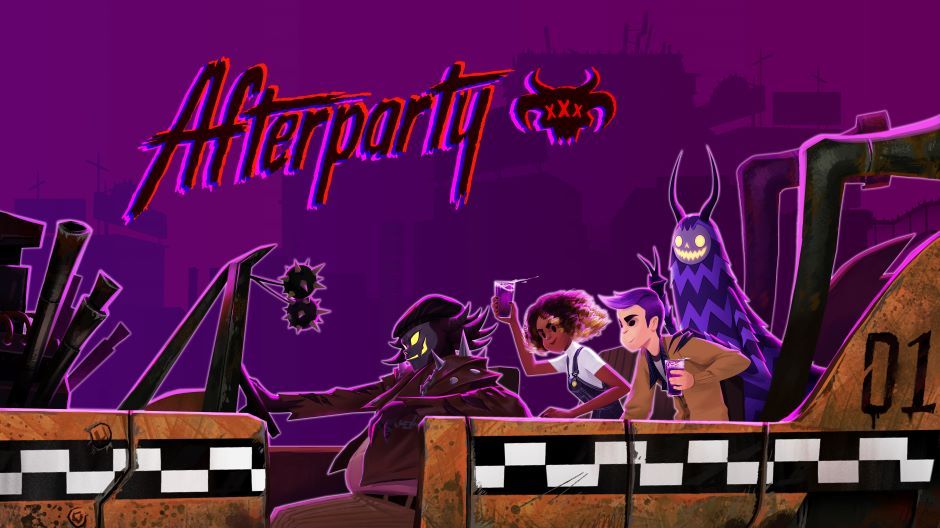 Night School Studio’s Oxenfree was a sleeper hit, one that you either stumbled upon and told friends about or similarly discovered at the behest of a pal. I was in the former group after downloading it as part of Xbox Games with Gold in September 2017 and even then, almost fell off the title as quickly as I snatched it up as part of my subscription. While it presents a devilishly clever supernatural mystery, it starts off rather sluggishly, giving the wrong idea of the brilliance that came next.

This isn’t the case with Afterparty, the studio’s follow up title (and, apparently, the second part of a trilogy of sorts). Right from the get-go, you know what to expect: you’re dead and Satan’s having his nightly party. If you manage to get there and drink him under the table, you get to go back to the land of the living. It’s loud and in your face and I wouldn’t have it any other way.

You follow a short introduction by setting off to work towards your ultimate goal, navigating Night School’s version of Hell while meeting its residents and getting to know its two protagonists, Lola and Milo. Initially, the two friends seem like they couldn’t be more different; Milo doesn’t have his life together at all while Lola is all kinds of confident, self-assured and cool as a cucumber. As the narrative quickly progresses, you realise the friends are more alike than perhaps either would care to admit. They’re complex, relatable characters that I grew attached to instantly.

While the demons of Hell are just that — demons — but that’s only because that’s their job. They’re working stiffs just like we are, assholes while on the clock and towing the company line. Come quitting time, though, they’ll happily slam down some brewskis with you and anything else capable of lifting a glass to its lips. The one exception to this is your own personal demon, an overachiever named Wormhorn that might be paid to torment you 24/7… or might just be working back in an attempt to try to impress the ol’ Lord of Darkness himself. We’ll leave Satan for you to discover yourself, though we will paraphase one of his subjects by repeating that he’s not evil, just the opposition. He’s like putting chocolate milk in your already chocolatey cereal.

Gameplay is simple — you can control your character’s movement with keyboard or mouse on PC (though in some areas a mouse click seems necessary if you need to cause the screen to scroll left or right). You’ve generally got a single action button useful for starting conversations, moving up and down stairs or grabbing a much needed beverage throughout your hellish pub crawl. You’ll see on-screen prompts that let you know you can engage with something rather than having to click on things needlessly.

Don’t you think we’ve got forgotten about binge drinking; you slam drinks back with a right-click of the mouse, perhaps the most important in-game action you can take. Getting drunk offers up new dialogue trees useful to position yourself at Satan’s table for the big piss-up. Most pubs will offer a handful of specialty drinks, and each is useful in one way or another. At a dodgy, TGIFriday’s-like sports bar, one drink might give you some sports knowledge you didn’t know you possessed, or another will simply serve as liquid courage, giving you the option to call someone out that you wouldn’t while sober. There are a bunch that make you talk like a pirate ’cause that’s partly fun and partly someone else’s torture.

When adding in that chocolate cereal reference above, I really had to work to stop myself adding ten or so more additional quotes. Needless to say, Afterparty should be commended for its diabolical sense of humour and elegantly crafted conversations. While it’s definitely the wrong time of year for additional playthroughs, I’m most certainly coming back when I find myself with some precious free time, slamming down some different drinks and picking new decisions just to see how things will play out in my newly-created alternate timeline. While Night School’s version of Hell is drastically different from traditional representations, your consequences definitely matter and will certainly impact your journey back to the living.

For $30 AUD — or at no extra charge to those with an Xbox Game Pass subscription — Afterparty is practically theft, sure to send you straight to hell for the transgression. Maybe just make sure you’re piss fit just in case you get down there sooner rather than later, eh?

Afterparty was reviewed using a promotional code on PC via the Epic Games Store, as provided by the publisher. Click here to learn more about Stevivor’s scoring scale.