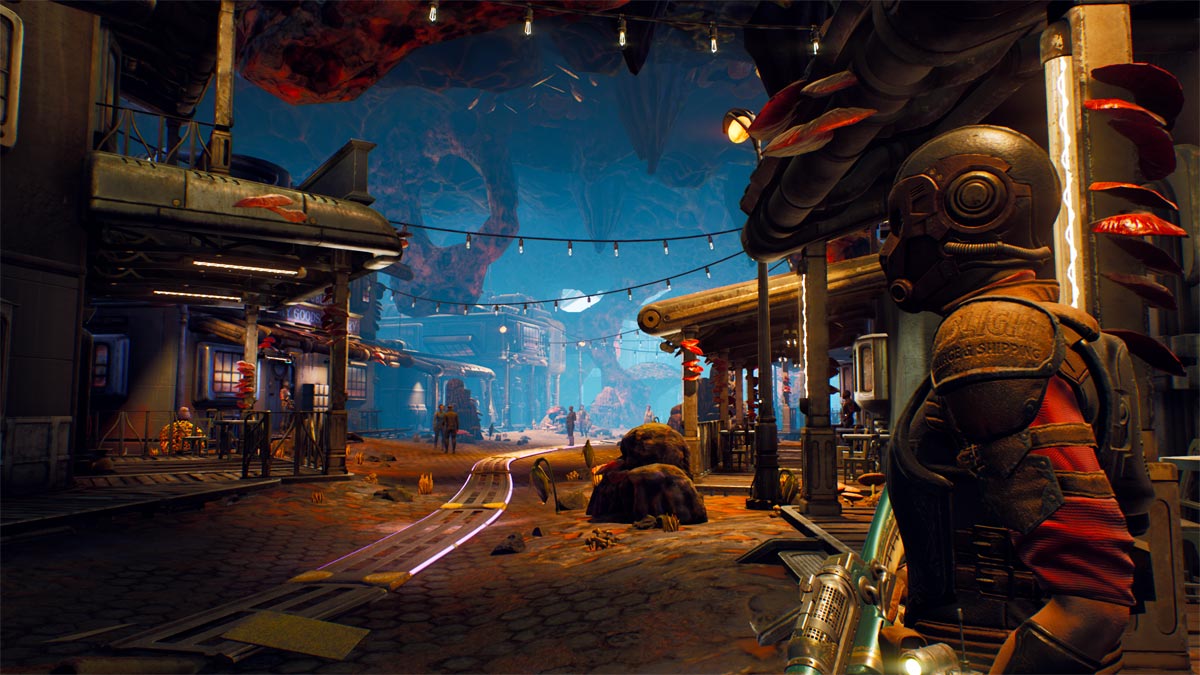 Obsidian is back doing what it does best.

We got a sneak peak at Obsidian Entertainment’s upcoming RPG The Outer Worlds at E3 2019, and while it was merely a taste, the recent addition to Xbox Game Studios is back doing what it does best — and on all platforms. While Microsoft has acquired the developer, the publishing rights to The Outer World remain with Private Division, a subsidiary of Take-Two, who will release the game on Xbox One, PS4 and Windows PC. It’s been long-touted as the Bethesda game Bethesda never published, and after just 30 minutes, I can’t shy away from the Fallout: New Vegas vibes radiating from The Outer Worlds.

Following the theme of E3 2019, The Outer Worlds is set in a dystopian future, where things haven’t gone well for humanity and there are robots aplenty; those that will kill you and those that will do your bidding. The strong western/sci-fi hybrid setting breaks free from its Fallout roots, but the gameplay, general style, characters and to a lesser extent combat certainly hark back to Obsidian’s best work.

The E3 mission was intent on demonstrating its flexibility through player choice. After getting some information out of a woman, who was having some issues with her recent business dealings, to activate the quest, Obsidian was quick to point out that was only possible because our protagonist was a smooth talker and able to charm his way into a job. Without the gift of the gab, he would have needed to find another way to acquire the job offer he sought.

Quest underway, there was bit more chatting, which ultimately led to a factory to be conquered. I don’t recall the specifics as to why this was happening — there was a lot of lore thrown around and plenty of backstory condensed into a short time — but one thing was clear: it was up to us to choose how to do it.

We went in guns blazing, forgoing the element of surprise. Before arriving at the front door, Obsidian detoured past the entrance to the sewer, in typical RPG-fashion hidden behind a waterfall, and motioned this would make an excellent stealth route into the factory; but we had our hearts set on wreaking a little more havoc.

Upon witnessing the horrors that lay inside, that decision was immediately vindicated. The factory was home to mutated pigs called boarst, which are covered in meaty tumours all over their body that are harvested for bacon, pork and ham. Genuine meat is a delicacy, so this substitution is a near indistinguishable alternative, but the boarst pigs are kept in horrendous conditions.

While our custom hero donned a disguise and lied his way past the first wave of security, it didn’t take long for the tides to turn and the blazing to commence. There are a variety of weapons and ammo types, but a charged up electric rifle seemed to offer the most bang for buck. With robot guards quick to engage following the initial commotion, we were introduced to the VATS replacement that does much the same thing, only faster.

By slowing down time in combat, the player is able to target specific limbs, but still takes an active role in hitting the target; it isn’t as automated as Fallout’s equivalent. We saw the benefit to taking out a leg to remove mobility and to hitting an arm holding a weapon, but going for the head still seems to be the most efficient way to eliminate both biological and mechanical opponents.

The real time, and slowed down, combat looks a lot better than Fallout’s, and for that matter most role-playing games. It was fast paced with plenty of agile movement around a confined factory floor, which will clearly play out differently in more open expanses. Well-timed and fully charged shots looked extremely satisfying when executed in full, and it reminded me more of the combat from a dedicated action game like Doom, rather than an RPG that treats action as a second class citizen.

In what I suspect was a scripted close call for the adorning E3 audience, we came close to dying by the hand of a couple of stronger-than-they-look robots. This triggered a prompt to purchase a new perk point, in exchange for becoming scared of that specific enemy, which would make them a little tougher in the future. That’s part of the fear system, which Obsidian has introduced as a counter to most RPG’s only tying perks to successful experiences; fear can be a powerful motivator too.

After choosing to decline the offer — and while I like the balance it offers, I’m not sure I want to voluntarily fear enemies — we caught the man we were after, a seedy-looking bloke named Clive who was running this operation and hadn’t paid the commanding woman who had hired us to eliminate him.

The dialogue choices are where you can shape your own story. Clive tried to bribe us with a lifetime supply of fake bacon if we turned on our employer. Since we didn’t know her from a bar of soap, it was a viable option, pending we had the necessary traits to successfully navigate the dialogue tree. With controller in hand, Obsidian seemed more inclined to follow the original orders and kill Clive, but instead ended the demo without a definitive resolution.

The Outer Worlds is bringing back something we’ve scarcely seen, at least in terms of new games, this generation: the first-person action-RPG. It’s heavily reliant on Obsidian’s Fallout connection, with dialogue almost as powerful as going straight for the kill and a world of quirky characters, all with very dark senses of human it seems, to explore. Yet it’s embraced that and in doing so, is crafting its own identity. While it’s the type of game I haven’t played much this generation, Fallout 4 aside, I didn’t realise I wanted more until I saw The Outer Worlds, and now October can’t come quickly enough.