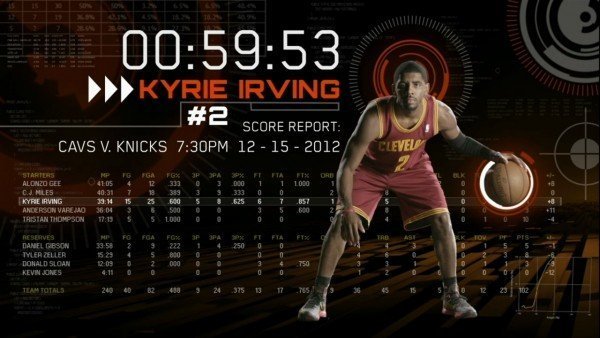 NBA Live 14 was my first hands-on experience with the DualShock 4, and — even playing such an early build of a game — the controller was damn impressive. I’ve never been a fan of the DualShock 3’s L2 and R2 buttons and the way they curve back into the controller. It always felt like I had to push harder and further than was necessary. Thankfully, the new controller does away with that system and is by far the biggest change Sony have dared with to make since adding analog sticks in the PS1 days. They’ve won me over already.

But, enough about the controller; let’s talk NBA Live 14. The demo inside the EA IGNITE lab featured an impressive looking Kyrie Irving playing solo on a half court. I picked up the controller and ran around to see the new ball and dribble mechanics. I was pleasantly surprised and suitably impressed. Having been told that the ball control was handled using the right stick only, I was a bit cynical that it would work, but I felt totally in control immediately.

The intuitive and simplistic ball control makes running around the court feel very natural without worrying about the ball. I imagine this is how pros like Irving feel. When he’s attacking the rim he is worried about defenders not whether he will fumble the ball. NBA Live 14 gives the impression of complete ball control. Doing so means that instinctively, a player can plan their next shot or pass rather than focusing on where the ball is or how it’s being dribbled.

Holding down L1 allows for quicker ball handling moves that show off the amazing motion capture that’s behind the authentic motion of Irving. Feeling like Irving was one thing. I wanted to dunk like him. Would this early build let me?

I backed up and ran at the rim from just beyond the arc, built up some speed and slammed it in on my first attempt. What was so impressive was just how easily I had grasped to controls and was already performing quite an aerial display.  There’s going to be an inevitable comparison to NBA 2K when considering NBA Live. However, comparing the two at this early stage is problematic. NBA Live 14 didn’t show off any actual gameplay outside the Kyrie Irving demo. The dribbling is promising, but does not make an entire game.

On the flipside, I play a lot of 2K and have been a fan of the franchise for a while now.  This year I had some major issues with my Wii U copy of 2K13 and had to contact customer support. What follows is a long, frustrating story spanning months. The ending of which concludes with not having my problem resolved and being left very frustrated. But what can I do? There are no other basketball games as good as 2K, right? NBA Live 14 finally feels like a contender. It’s great news for fans too.  As these these two series compete for the top spot they’ll be pushing each other to excel.

I will be very interested those how this pans out for both games and I think I’m more exited about the new NBA Live than 2K14, even if they do have LeBron on the cover.