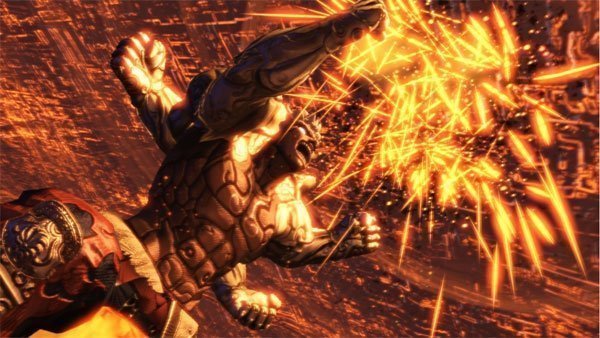 During our visit to the Capcom Showcase, we had time to go hands on with one other title. Developed by CyberConnect2, Asura’s Wrath is a brand new IP that put simply is like Dragonball Z with an extra shot of adrenaline.

You take control of Asura, a General of the Gods, who upon returning from war finds the Emperor of the Gods murdered. Asura is accused of the act and after escaping the Imperial forces further discovers that his wife and daughter have been kidnapped. Confronted by the Emperor’s murder, Asura is banished to Earth. Upon waking twelve millennia later he sets out to exact revenge and rescue his wife and daughter.

The presentation of the Asura’s Wrath borrows elements from Asian mythology and blends them with science fiction. It results in a very unique art style that compliments the plot perfectly. During play you can also see obvious influences from anime such as camera angles and how cutscenes unfold. 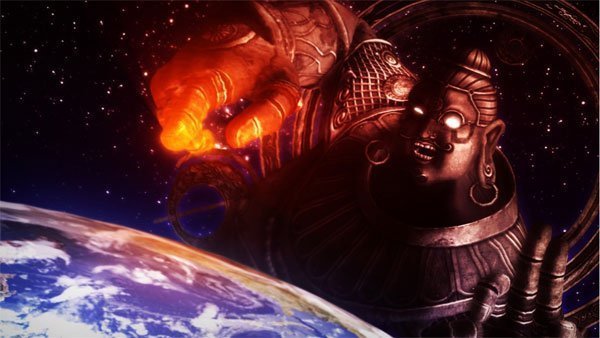 Gameplay is very action oriented using a combination of free movement and context initiated quick time events. As you fight your way through the games episodic sequences you will build up your Burst metre. As the meter increases, Asura’s attacks become more powerful. Once the meter is full you can unleash a burst attack which plays out in quick time events dealing incredible damage to your opponents.

During our hands on time, Asura’s Wrath felt like you’re playing through a dynamic action movie. There is such impressive attention to detail, which is something you don’t often see from new IPs. In fact it’s rather rare to see new IPs that you can get this excited over.

Asura’s Wrath is set to release on 23 February for PS3 and Xbox 360. You can also download the demo on both consoles and go hands on yourself with two chapters from this amazing new title.