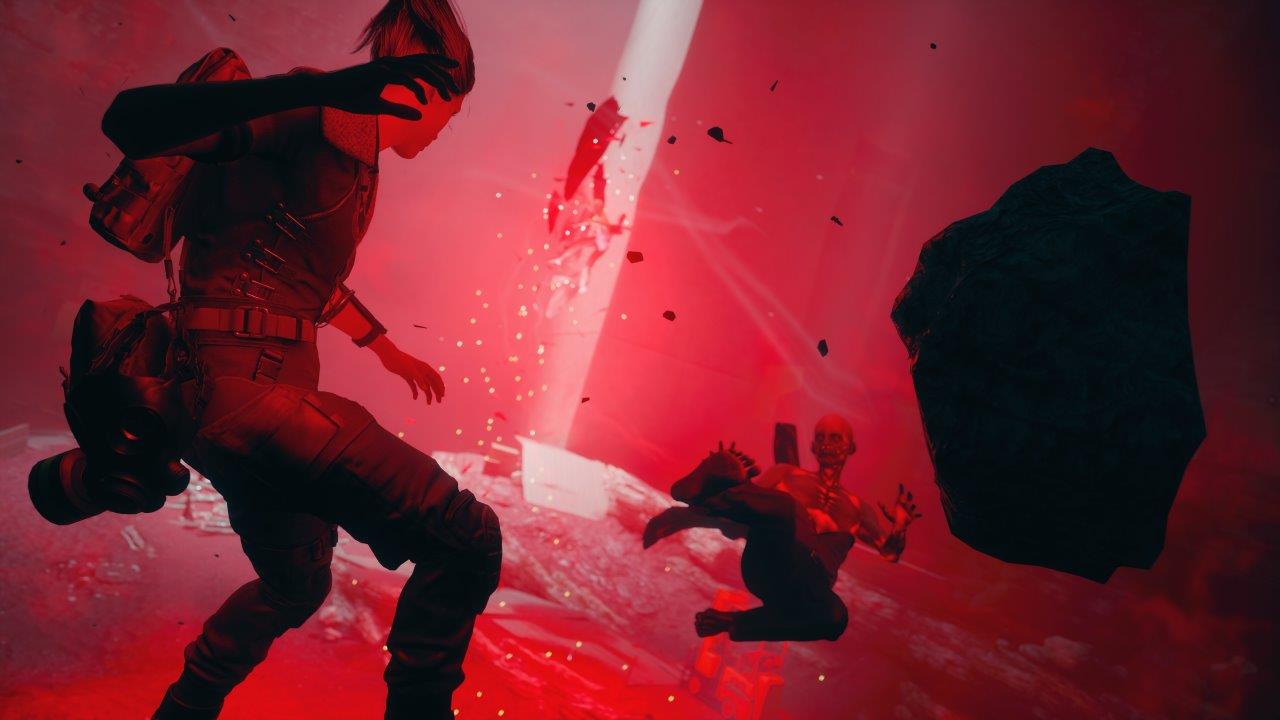 The Bureau and its myriad mysteries make a welcome return.

Control’s Foundation expansion drops on Windows PC and PS4 later this week, and ahead of time Stevivor was able to take a tour through its opening mission. Long story short, it feels very good to be at my second home, the Federal Bureau of Control. Or rather, under it.

Foundation takes place in the literal foundation of the Oldest House, a cave-like system described as a favourite vacation destination of the mysterious “janitor” Ahti, and accessible purely through a stone monolith found in the bowels of the Bureau. Playing as Director Jesse Faden, the player is tasked to the location in order to track down Helen Marshall, the hard-ass Head of Operations who disappeared in Control’s main campaign. The search for Marshall quickly gets thrown to the side as we discover that the Astral Plane is slowly seeping into our reality, and as all things at the Bureau seem to do, threatens life as we know it.

The Foundation is dark, isolating and features long, blackened stretches of rock dotted with old Bureau equipment and red sand that looks like it’d get into even the hardest-to-wash of places with ease. Unique green crystal formations erupt from the walls as you delve deeper into the labyrinth, and from the expansion’s teaser, we know that Jesse will eventually to be able to manipulate them to some degree.

Though Control was the clear winner in Stevivor’s GOTY 2019 awards program, its Expeditions update didn’t do it for me. It was a Horde mode, plain and simple; Foundation is the title’s first full-fledged expansion and that’s thankfully apparent right out of the gate. It’s premise immediately captured my attention, though I’ll admit it took me a half an hour or so to get reacquainted with Jesse’s powers and the best way to – pardon the phrase – control them. Like many DLCs released long after a game debuts, my muscle memory was all but done. I was honestly surprised how quickly it came back, and more importantly, how that had to happen by necessity. Foundation, like Control before it, does not hold your hand.

Very quickly into the expansion you’re introduced to the Hiss Sharpened, a new enemy type that’s aggressive as all hell. The baddies will mercilessly seek you out, rushing at you with pickaxes in hand and itching to the opportunity to lash out at you when you’re within arm’s reach. If you’re floating above them using levitate, they’ll instead throw those axes at you. They give you little time to react and plan, and it’s for that reason that the game’s new Shield Rush ability is incredibly useful.

Technically, Shield Rush isn’t part of Foundation but instead offered to all players (including Xbox One) as part of the game’s March update. Shield Rush combines the Shield and Evade powers, letting Jesse raise a shield and slam it into baddies without actually losing the shield itself. It’s equal parts defensive and offensive, harming enemies you collide with whilst at the same time putting distance between you and others.

Foundation aside, the free update also provides a zoom overlay for documents, DLSS 2.0 support on PC, the ability to reallocate Ability Points using Essence and, as Remedy previously confirmed with Stevivor, will greatly improve map readability. Control’s map how is far more 3D than ever before, showing layers and floors so you can tell if something is above or below you rather than on the same plane.

Control’s first expansion is rich with Bureau lore and, clearly, some spicy puzzles – you saw that lucky cat, or Maneki-neko, taunting you in the preview trailer right? With Remedy promising its campaign will take around 4-5 hours, I can’t wait for the opportunity to settle in with the weird and always engaging world Sam Lake and Remedy Games have dreamed up.

Foundation heads to Control on Windows PC and PS4 from 26 March; it follows on Xbox One from 25 June. You can watch the first five minutes of the expansion here. Again, the free March update will be available across all three platforms from 26 March.