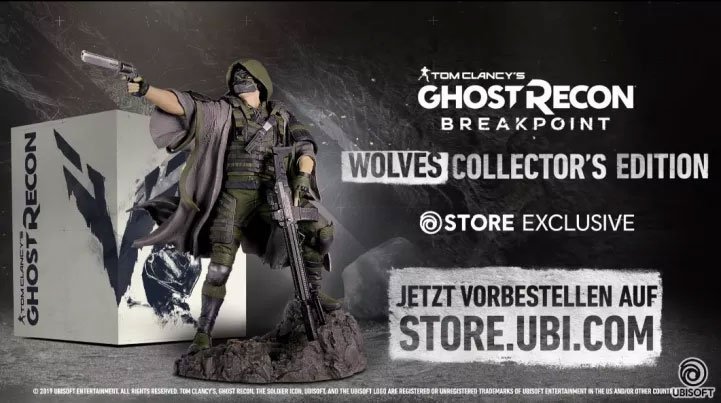 Ghost Recon Breakpoint has been leaked to Ubisoft’s online store ahead of a full reveal early tomorrow morning.

Ubisoft’s German-fancing store leaked details of Breakpoint including a special Wolves Collector’s Edition, seen in the image above. The listing also detailed the game’s release date: 4 October across Windows PC, Xbox One and PS4.

According to a now-removed post on Reddit, Breakpoint looks to be a continuation of Ghost Recon: Wildlands, starring Cole D. Walker, a character introduced in the Wildlands’ Operation Oracle update last week. Walker, portrayed by Jon Bernthal (Punisher, The Walking Dead), is said to control an army of weaponised drones. As with Wildlands, Breakpoint can be played in 4-player co-op.

Ubisoft’s official Ghost Recon reveal is set for 4.30 am AEST tomorrow morning, 10 May. We’ll keep you posted as we learn more.

For now, expect Ghost Recon: Breakpoint on Windows PC, Xbox One and PS4 on 4 October.