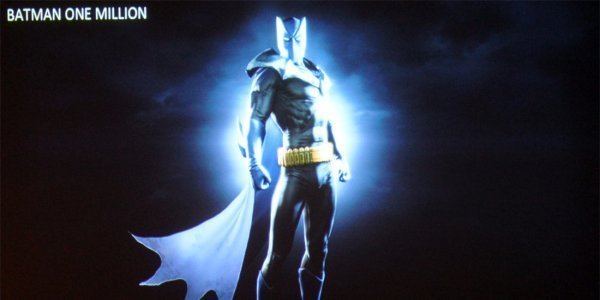 At the San Diego Comic-Con, a Batman: Arkham Origins panel revealed a series of new skins for the game, a redesign of the villian Copperhead, and a tease that we may see Batgirl somewhere in the game.

The snake-themed Copperhead, originally introduced in Batman comics way back in 1968, has been reconceived as a lithe female assassin. At the Arkham Origins SDCC panel, WB Games Montreal’s Eric Holmes said that Copperhead’s motion capture in her reveal video — which you can view below — required the work of three different performers, including a Cirque du Soleil acrobat.

DC’s Geoff Johns also said during the panel that the comic company loved the redesign of Copperhead so much that they plan to use the character pretty much as-is in their New 52 comic universe.

The panel also confirmed a number of skins for Batman to wear, including “Knightfall” Batman, “1966 Batman TV show” Batman, “One Million” Batman (pictured above) and “Worst Nightmare” Batman.

Finally, Holmes also confirmed that Arkham Origins takes place before Robin joined forces with the Caped Crusader, meaning he won’t be appearing in the game. Describing the game as Batman “year two,” Holmes hinted that just because Robin’s not in the game doesn’t mean Batgirl won’t be in some fashion or another.