Warner Bros. today announced that the LEGO Harry Potter Collection will head to PS4 next month.

The bundle heads to PS4 on 19 October. 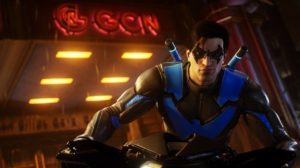