After 9 months at Ubisoft, Ballard is now back at Naugty Dog working as a Multiplayer Level Designer and Environment Artist, presumably on Uncharted 4. Ballard is a veteran of the series, having worked on Uncharted 2, 3 and 4 previously, as well as working on The Last of Us.

Perhaps Ubisoft will announce something at E3. 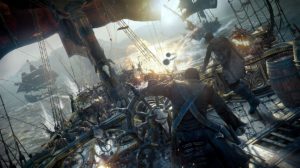