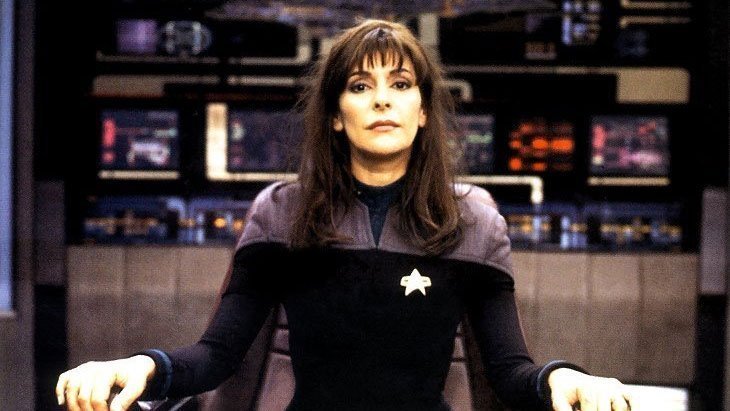 The reason why? Sirtis stole them after filming on Nemesis was wrapped up.

Marina Sirtis has revealed that she’s wearing the same wig and contact lenses in the upcoming Star Trek Picard as she did in her final Star Trek feature film appearance, Nemesis, as Commander Deanna Troi.

The reason why? Sirtis confessed that she stole the items after filming on Nemesis was wrapped up.

“I got the call, and then I didn’t hear anything [about Troi’s contact lenses],” Sirtis told TrekCore. “So I called and said, ‘You do know that I wore a wig and black contact lenses?’ I told them, ‘I think I stole them [from Nemesis], so I think I have them.’

“So we got the contact lenses cleaned – since they’ve been sitting in a case for like 15 years – and I have the wig, [both] that I wore in Nemesis.”

Sirtis added that Star Trek Picard staffers “wouldn’t have had time to make a $10,000 wig” and that she was unavailable for fittings and design anyway as she was in England directly before filming.

“It was lucky that I did pilfer them,” Sirtis concluded.

Thanks to TrekCore, you can check out Sirtis in her stolen contacts and wig above — that’s her in Nemesis on the left and in Picard on the right. Sirtis is joined by fellow Star Trek: The Next Generation cast members Patrick Stewart (Jean-Luc Picard), Jonathan Frakes (Riker), Brent Spiner (Data) and Jonathan Del Arco (Hugh) in addition to Star Trek: Voyager‘s Jeri Ryan (Seven of Nine) for the upcoming show.