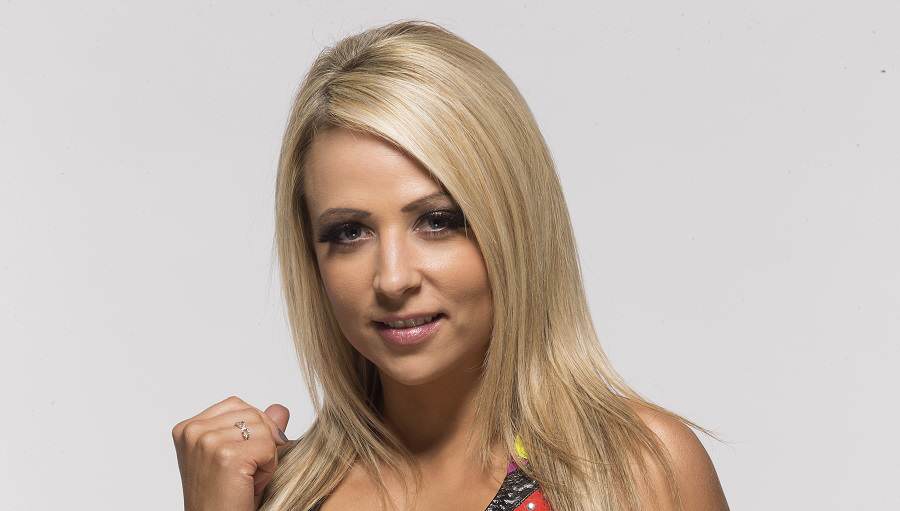 Taking time away from her busy schedule, Australia’s first WWE Diva was nice enough to have a chat to Stevivor about the WWE 2K franchise and her journey in the WWE.

Cav, Stevivor: Are you a Gamer?

Emma: You know, to be honest, I haven’t played years, but I grew up playing lots of games with my brother Jake, who introduced me to wrestling. You know with being so busy and moving around I really haven’t had a chance.

Emma: It’s very surreal. It’s kind of eerie how much it looks like me, and that’s great. I kinda have to pinch myself to wake up and realise that it’s really me on that video game.

Stevivor: Is there anything you’d change about yourself in the game?

Emma: My features and face are pretty down, so I’m really happy with the way I look actually.

Stevivor: In your opinion, which is more exciting to see: Emma in a videogame or Emma as an action figure?

Emma: Both? Can I say both? I just got my first action figure on my own. It’s sits on top of my fridge. I look at it and it’s like “Woah! I have an action figure!” I see it nearly every day. Between that and the videogame it’s all kinds of crazy.

Stevivor: Do you feel any pressure about representing Australia on such a word wide stage?

Emma: Well I wouldn’t say pressure is the word. I am excited to be representing our country. I’m proud to say I’m the first Australian Diva, it’s something I’ve dreamt of since I was a little girl. So no, not pressure… more like ‘Aussie Pride’.

Stevivor: What’s it like returning to your home town, and performing at Rod Laver Arena in front of the Australian contingent of the WWE Universe?

Emma: That is amazing. Last year I came out for the first time and it went by in a flash. I’m excited that a year has gone by and it’s time to come back. I’m going to try and take it in a bit more this time and just embrace the moment.

Stevivor: Do the other WWE Divas and Superstars look to you as a bit of tour guide when you are back home?

Emma: Definitely! They are already asking me what we are going to do while we are there and what we can do after the show. We don’t always have a lot of time. Last year we made it to the zoo in Perth and a little bit of sight seeing. Hopefully this year we can make a few more plans and squeeze in a little bit more.

Stevivor: Do you tend to bond with the other Aussies coming through the WWE via Tough Enough and NXT?

Emma:Oh, for sure! I actually met Giorgia from Tough Enough last night, as I was back stage. I don’t know much about her, but she was very sweet in person. Jessie and Cassie are currently in NXT. I’ve known them for years and I’m really happy they are now here, living out their dreams too. And there’s Buddy Murphy too, we’ve known each other since we were about 13.

Stevivor: Would you like to see the WWE do another huge event in Australia like the Global Warning Tour of 2002 at Etihad Stadium, which I assume you attended?

Emma: Oh yeah, I was there.

Stevivor: Where did you sit? Were you on the ground?

Emma: I was on the ground, I sat by myself. I’d used all my savings to buy that ticket, I was twelve years old at the time. I had made a sign… I sat by myself but I had a blast! But I had to buy my mum a seat, right up the back of the stands, because she didn’t want me to go by myself. There was about 56,000 people at that show.

Stevivor: Ok, the final question: Dream match. Anyone from history, dead or alive, who would you love to go up against?

Emma: I have to say Trish Stratus. That would be a pretty cool match. She’d give me a run for my money.

Stevivor: Shall we start a #OneMoreMatch hashtag trending?

Emma: Oooh! We could do that! Let’s make that at Wrestlemania, while we’re at it!

Stevivor: Well there you have it! Everyone Tweet: Trish vs Emma at Wrestlemania!

The WWE are touring Australia this August, stopping at Brisbane, Melbourne and Sydney.

Developed by Yuke’s and Visual Concepts, WWE 2K16 will be avaialble on Xbox 360, Xbox One, PS3 and PS4 from 29 October