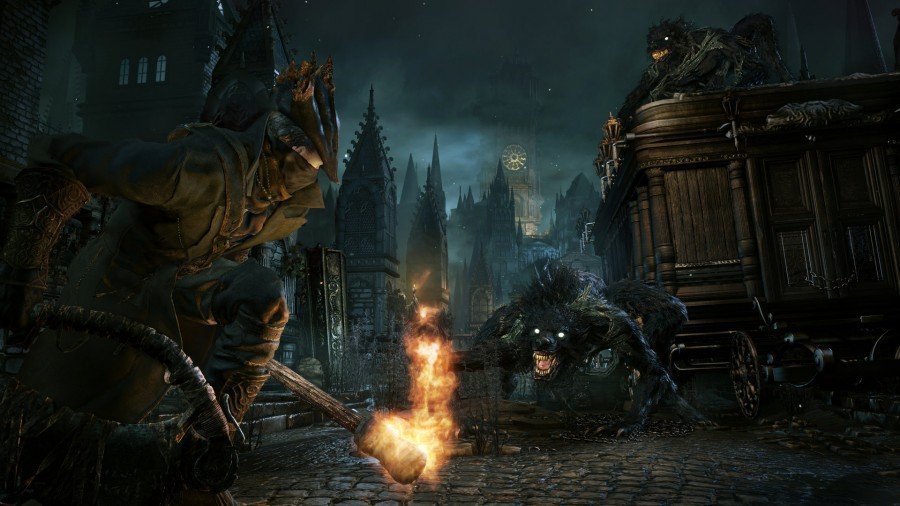 So you’ve been hearing all about this Bloodborne game and you’ve decided to grab yourself a copy. You get it home, excitedly put it in your PS4 and discover a nightmarish hellscape in which you die over and over and over again. Do you get discouraged and give up? No! You press forward and show this game who’s boss.

Starting out in Bloodborne can be quite daunting, so to give you a headstart, we’ve put together our top five tips for surviving.

1. Master the Counter Shot and Backstrike

Fighting enemies head on and in groups (especially early on) is a great way to get yourself minced and lose all of your precious Blood Echoes. Two very important techniques that should be mastered as early as possible are the Counter Shot and the Backstrike. Since Bloodborne largely does away with shields in favour of a dual-weapon system it’s imperative that you dodge (see point three) and take enemies out as quickly as possible to avoid death. The quickest way to dispatch the bad guys are these two techniques. Counter Shot is used when facing an enemy head on, while Backstrike – as the name suggests – is for when you’re able to sneak up unawares.

To use Counter Shot you’ll need some pretty exact timing (which varies enemy to enemy) and at least one Quicksilver Bullet. Make sure you’re locked onto the enemy you’re fighting, by clicking R3, and watch for its attack patterns. As the enemy is about to strike hit L2 to fire your gun. If you’ve nailed the timing, the enemy will be staggered and fall to its knees. Quickly follow this up by pressing R1 for a devastating attack that should remove all (or close to) the enemy’s health.

The easiest way to do a Backstrike is to sneak up behind an enemy that is not yet aggroed. It is possible to perform this move on an enemy you’re engaging, but it’s much more difficult. As the name suggests, you need to hit the enemy in the back and you need to do it with a fully charged R2 strike. When an enemy is unaware of your presence, sneak up behind them by gently pressing the analogue stick so your hunter moves more slowly. When close enough to the enemy hold down R2 to do a charged strike. The enemy will be staggered and fall to its knees. Like with the Counter Shot, follow it up by pressing R1 and you should make short work of it. To pull off a Backstrike in battle you’ll have to use some fancy dodging to get behind the enemy and hit it in the back (with a fully charged R2 strike) before it turns to face you.

As you defeat enemies you’ll accumulate Souls Blood Echoes. If you’re killed you’ll drop them all with only one chance to collect them again from either the ground near where you died or from a nearby enemy; it’ll be the one with glowing blue eyes. Blood Echoes are Bloodborne’s currency and you’ll need to use them for everything from levelling up, to improving and repairing weapons and even for purchasing items from the store. With only one currency spread across so many ways to spend you might be paralysed in the beginning and not know how to proceed. The best advice; spend, spend, spend.

The Hunter’s Dream (Bloodborne’s safe hub) is where you’ll be spending your hard-earned Blood Echoes, but not until you face the first boss. In the first area of Yharnam, you’ll eventually come across the Cleric Beast and win or lose, when you return to the Hunter’s Dream after your first encounter, the Plain Doll will be awake and offer to channel your Blood Echoes. Channelling Blood Echoes is how you level up by increasing Vitality, Strength, Endurance, Skill, Bloodtinge and Arcane each by one point for each level. Vitality governs you HP, Endurace your stamina, Strength, Skill and Bloodtinge all affect your damage output with melee weapons and guns while Arcane sets your magic damage.

In the beginning you’ll want to focus on Vitality and Strength with Endurance following closely behind. Keep earning Blood Echoes and funnelling them into your stats and you’ll find that battles will soon turn in your favour.

Spending Blood Echoes on upgrading your weapons is also imperative as the more you upgrade them, the harder they hit. Inside the house in the Hunter’s Dream (which won’t open until you fight the Cleric Beast) is a work bench which can be used to Fortify and Repair weapons. Both cost Blood Echoes, but Fortifying also requires Bloodstone Shards. Enemies occasionally drop shards when you defeat them and you’ll find them on the myriad corpses littered about Yharnam. Once you have accumulated a number of them, head to the work bench and Fortify your weapon. In doing so you’ll improve the physical damage stat of the weapon, which should help you beat enemies more easily. When you Fortify your weapon it also Repairs it at the same time, so make sure to Fortify first so as not to waste precious Blood Echoes on repariring.

One additional tip: don’t purchase Blood Vials or Quicksilver Bullets. They’re hideously overpriced in the Hunter’s Dream and are in abundance in Yharnam. If you’re in short supply, choose to awaken in Central Yharnam or 1st Floor Sickroom and proceed towards the bonfire. Carefully take out all the enemies in this area and you’ll soon be overflowing with Blood Vials and Quicksilver Bullets. Additionally, snipers drop bullets 100% of the time, so if you’re low, seek them out.

3. Learn how to dodge and when to lock-on

Pressing the Circle button has two distinct functions in Bloodborne. When not locked onto an enemy a tap of the button will cause your Hunter to roll and holding it down will make them sprint. When you are locked on (by clicking R3) your character will dodge side-to-side or forward and back depending on which direction the left analogue stick is being pushed. You’re unable to sprint while you’re locked on.

In battle there are times when you should use the lock-on system and others when you shouldn’t. If you’re going one-on-one it’s usually a good idea to be locked onto your target. Likewise when fighting bosses. It keeps them centered in your screen and ensures they won’t be able to hit you with a sneaky side or back attack. When faced with a group of enemies however, it’s generally a better idea not to lock-on.

The side-step is a great maneuver for gaining position on enemies (as you can see in the video above) and should be mastered as soon as possible, but it only works well against one (or maybe two) enemies at a time. When fighting three or more at a time — which I stress should be avoided, at least initially — side-stepping is a great way to walk right into enemy attacks. By not locking on when faced with a group, you’re able to roll and avoid being hit. Granted you’re not able to keep your targets locked in the center of your screen, but you’ll be much less likely to take a beating if you can roll out of harm’s way and to safety. Stay on your toes and stay on the move and you’ll stay in one piece.

4. Be aggressive, against your better judgement

It seems to make sense that the best way to play Bloodborne would be cautiously, taking things slowly and carefully exploring. That’s correct to a certain extent, but on the flip-side, Bloodborne rewards aggression and players who take risks. It may go against all your instincts, but sometimes the best strategy is to rush in and be on the offensive.

Take the video above for example. That was my fifth or sixth try at killing that enemy. In all previous attempts I had waited near the top of the ladder to see if I could climb up, sneak up on him and take him out with a Backstrike. It failed miserably every time. The enemy would hear me climbing up the ladder and turn to face it, waiting. The instant I climbed to the top he would shoot me with his blunderbuss and I’d fall back down to my death. I was trying to be too careful, too cautious and Bloodborne was punishing me.

Your Hunter’s equipment hints at how you should approach things. Without a shield, your Hunter has no options other than to attack and dodge. By making snap decisions, quickly attacking and always staying on the move you’ll be one step ahead of your enemies. There’s nothing wrong with a little careful planning, but once you’re in the thick of it a moment’s hesitation will get you killed.

5. Explore everywhere and don’t be afraid to die

Yharnam is absolutely enormous and there are secrets around nearly every corner. Thoroughly explore the environment as you progress and always be on the lookout for items and shortcuts. What was once a trek through dozens of enemies that might take upwards of 20-minutes could become a short 30-second jaunt. You’ll be amazed at how interconnected every part of the levels are and soon realise that the more you explore the more open they become.

A good strategy is to smash every box, barrel and breakable item you come across. If they’re clustered together in a large group there’s a good chance they’re hiding either a shortcut or an item. Leave no stone unturned and you’ll be surprised at what you’ll come across. Even if you enter a new area and you’re unsure if you’ll survive; press onward. Make sure you head to the nearest Lantern first and spend your Blood Echoes in the Hunter’s Dream, but then dive right in. The only way to fully explore Bloodborne is to just do it. Don’t be afraid of death. It’s going to happen and it’s going to happen a lot, but with each death you gain more knowledge of the world, the map and the enemies. Knowledge you can use to your advantage.

Bloodborne doesn’t hide the fact that it’s a challenge, but it can be incredibly rewarding when you begin to figure out its nuances and how to use all the tools it provides to you to overcome that challenge.

Do you have any tips? Share them in the comments section below.