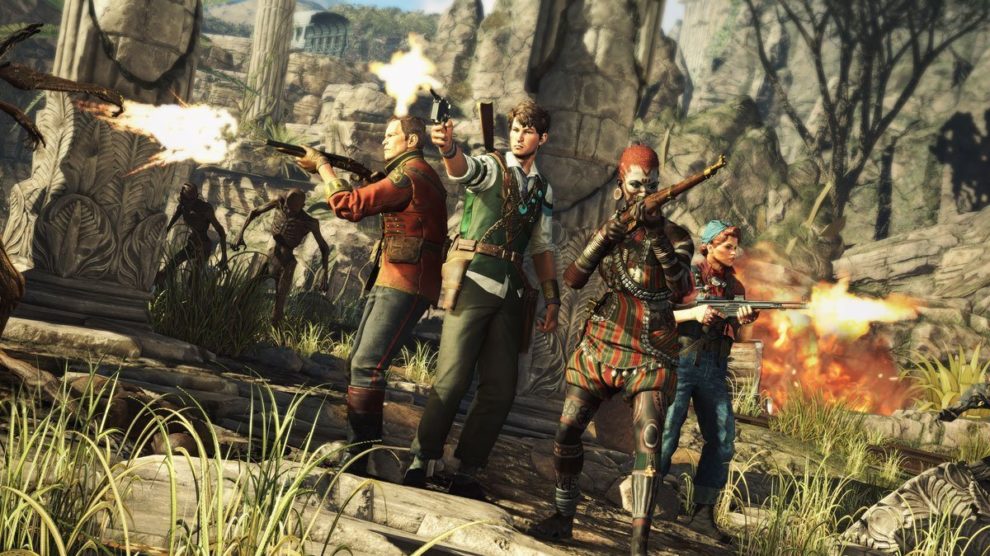 Strange Brigade is the latest from Sniper Elite’s Rebellion Developments, though it couldn’t be further from that fabled franchise. Gone is the patient, silent lone wolf; instead, players fill shoes of a team of four rag-tag, loudmouthed, action-oriented explorers that have as many quirks — and quips — as their enemy has mummified drones. Everything is camp, including its main characters, black-and-white serialised film cutscenes, and a 1930s-style, over-the-top English narrator. This is basically a relative of the Adam West Batman series, just without the “BAM!” and “WHAPP!” titlecards that are thrown-up as you dispatch the evil undead.

The titular Strange Brigade is a supernatural team that scours the world (in a crazy airship, I might add), as interested in uncovering relics and artifacts as it is righting the world of eerie wrong-doers. In this case, the team is focused on the latter – an ancient evil in the form of Seteki, the Witch Queen. As the player, you’ll set off on a series of missions in solo play or in co-op with up to three other people.

While a fifth character will be available to players at launch, we played through Strange Brigade using its core quartet – a grizzled hero-type, a stuffy Oxford scholar, a blue-collar factory worker and a Kenyan witch-warrior. Each comes with a particular set of skills; Archimedes, the aforementioned scholar, is able to help uncover secret paths. The players also have unique special moves; some produce homing missile while others work best as close-range clearers. Similar to co-operation inside Overwatch, things works best when players team up and use their special abilities to compliment one another. 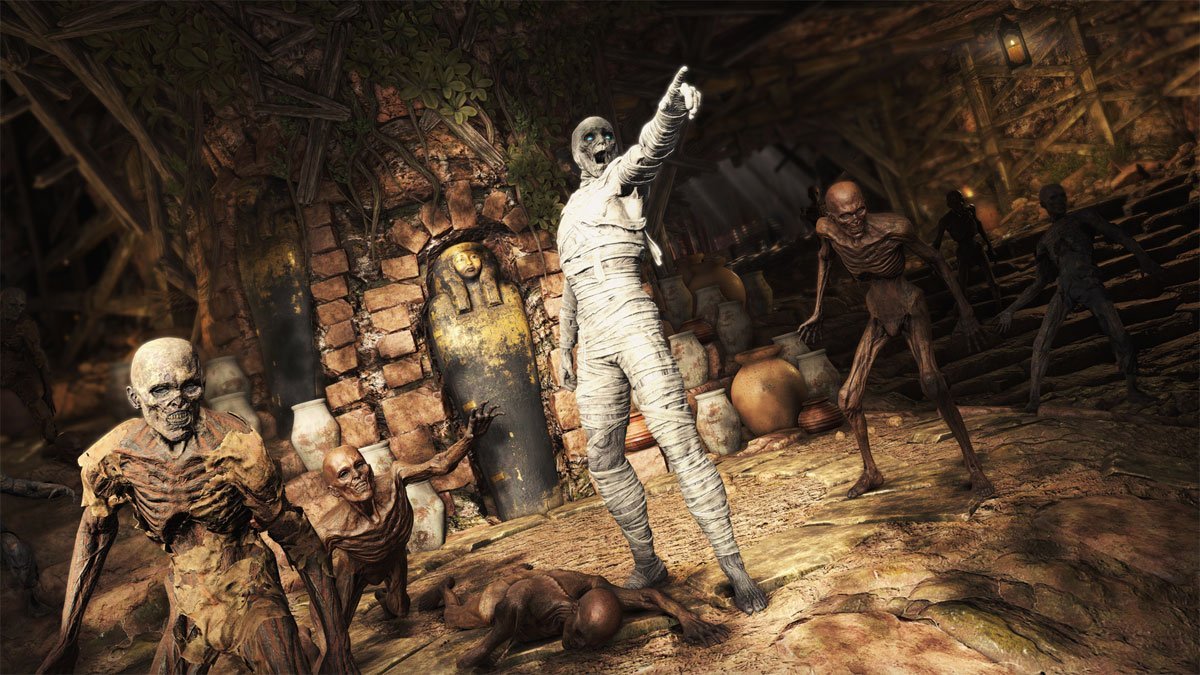 While Strange Brigade is largely linear, level design means you can stray from the beaten path to check out side content. A single campaign mission will take around an hour to play, especially if players are looking for those secret paths and collectibles. Puzzles are also littered inside the world, but aren’t too cerebral; usually, it’s a matter of finding a hidden switch (or three) or memorising symbols to activate corresponding ones in another location. Other random puzzles are lifted straight from BioShock, though here you’re tasked to shift supernatural energy through a series of pipes rather than good ol’ H2O.

In a normal mission, players will find themselves entering open areas riddled with enemies – mummies, cursed warriors and gigantic scorpions, to name a few. Combat is comprised of firing away at baddies, taking out as many as you possibly can while you’re dodging their attacks. Traps are abundant in each area, meaning you can fire at an orb to activate floor-spikes, giant swinging axes and more to help clear opponents. Fallen baddies will leave behind motes which power your special-powered amulet; co-op players don’t share motes, so it can sometimes become a race to vacuum up the spoils of war.

While the characters themselves have unique powers and feel different in that way, the same can’t be said for weaponry. Able to be changed out at stations located throughout each levels, they all handle the same. I really couldn’t tell you which standard weapon I liked best as they all seemed identical. Special weapons, unlocked by spending coins at specific chests, break this trend; the flamethrower is a particular favourite of mine that’s worth every penny. Environments tend to be samey as well, so campaign levels are better when savoured rather than powering through them in a couple sessions. 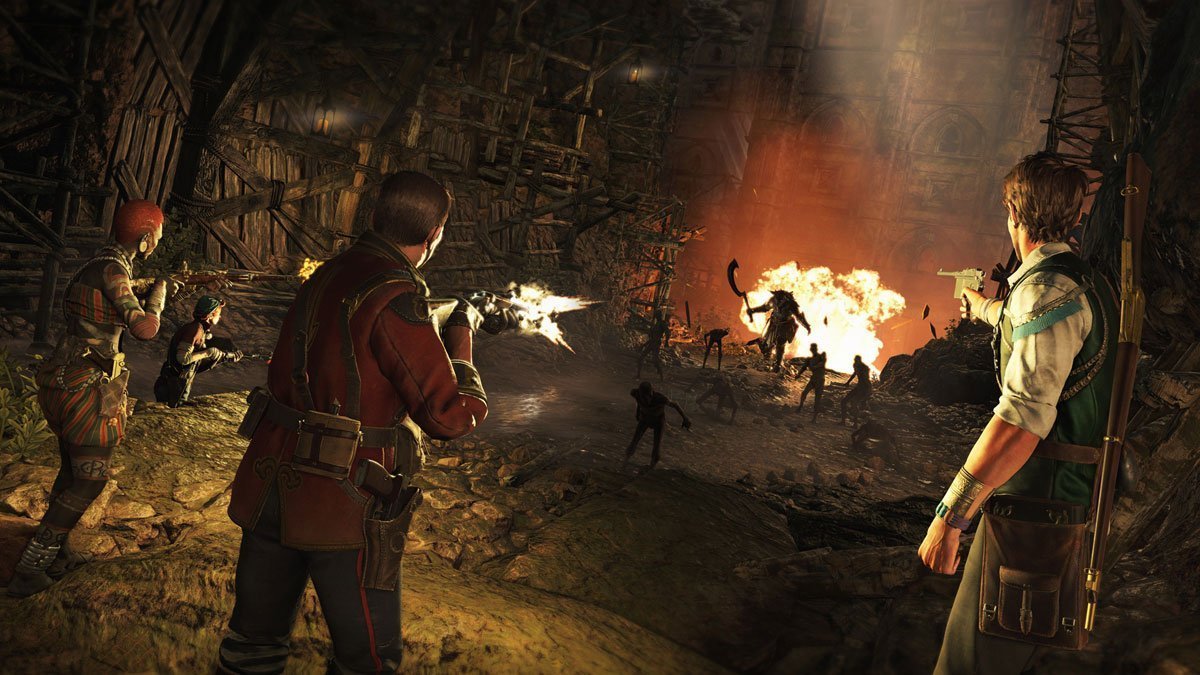 In groups, you can swiftly mow through enemies and puzzles; alone, things tend to slow way down. Taking on wave after wave of enemies alone quickly becomes a slog because you can only kill so many baddies at once. Strange Brigade is never that difficult, but it can get a bit monotonous and time-consuming when solo. I liken the solitary experience to doing a Destiny 2 Strike or Nightfall as a lone wolf – you can get things done easily enough, but you’ll find yourself sitting in the back of a map, slowly picking off enemies as time marches on. If solo play proves to be too much, you can thankfully kick yourself out to a lobby and pick up random players and start off again straight from your last checkpoint.

Each of Strange Brigade’s levels offer a bunch of variety, but once their initial secrets are uncovered, replayability plummets. Thankfully, Horde and Time Attack modes help to combat this by focusing play on speed and efficiency. It’s best to play these modes in groups rather than solo; actually, it’s better to play any part of Strange Brigade in the same way. Matchmaking is on offer, thankfully, but we weren’t able to test its functionality pre-launch.

Despite a largely forgettable story, Strange Brigade has a lot of charm because of its campy nature and likable, chatty characters. While best in groups, this will also suit patient types who’ve got a good shot and lots of time to kill. Kudos to Rebellion for taking a chance and delivering something wildly different from Sniper Elite.

Strange Brigade was reviewed using a promotional code on Xbox One, as provided by the publisher. Click here to learn more about Stevivor’s scoring scale.