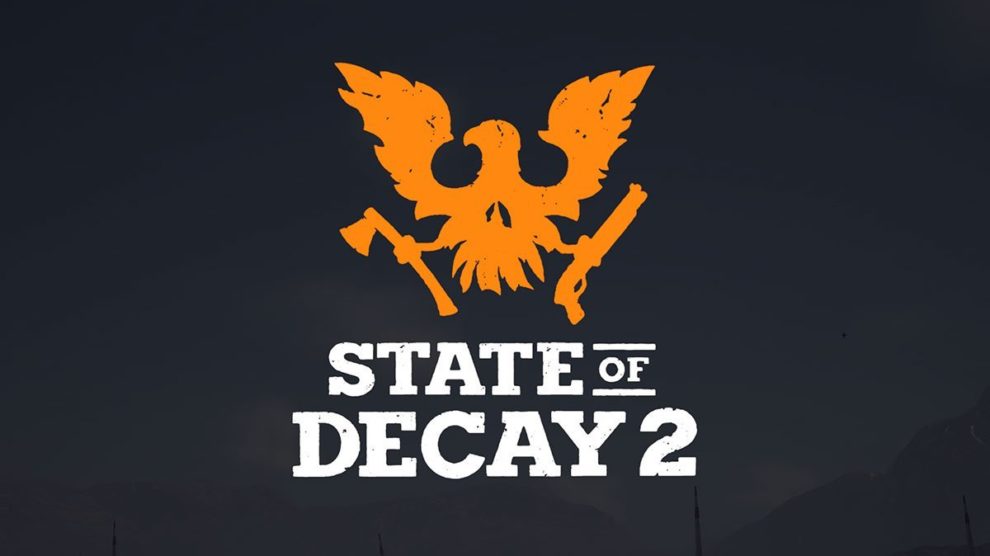 Undead Labs’ State of Decay was a curious thing, a janky, bug-riddled work that nonetheless offered a rewarding gameplay loop that chose to focus on survival elements of a zombie apocalypse rather than headshots and straight up horror. Undead’s follow up doesn’t reinvent the wheel – nor provide a fully polished experience despite a move from CryEngine to Unreal Engine 4 – but does offer a marked improvement over the original.

State of Decay 2’s premise is simple: you’ll begin as a group of three survivors, arriving in one of three boroughs (do yourself a favour and choose the valley; trust me) and tasked to survive. Freely able to switch between those in your group, your first step is to establish a suitable a home, building and upgrading elements to gather food, fuel, building materials and medicine. That complete, you’ll fall into the real loop of the game: venturing out into the unknown, scouting and cataloguing resources then trying to gather them as the undead shamble around you.

Your survivors are dependent on stamina and health. Stamina is used to sprint and attack zombies, while health is largely self-explanatory. While your stamina does replenish after a short cooldown period, jolts of caffeine can be used to immediately top-up your pool; painkillers do the same for your health. If you play too long or take too much damage all at once, your stamina and health reserves will drop, requiring different sets of consumables to return those respective metres to what they once were. Unique traits also affect each survivor and the overall group; I had one survivor with very low stamina because of asthma and another who was a kleptomaniac, causing friction in the camp by stealing supplies when backs were turned. 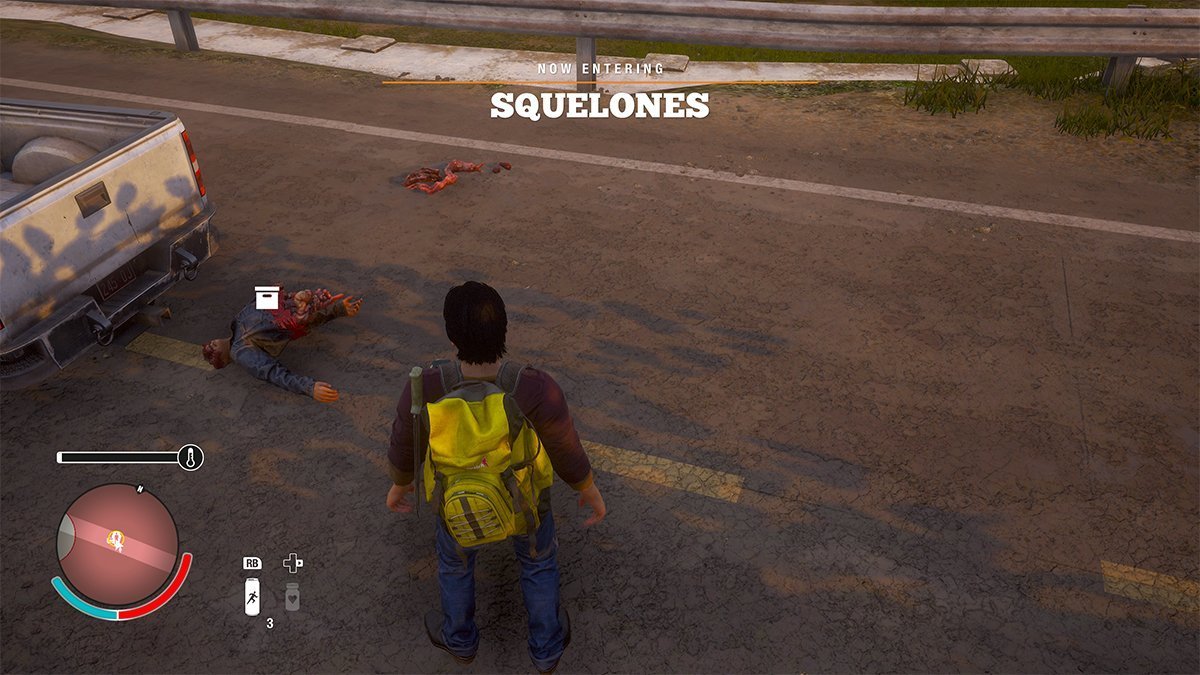 Several new RPG/MMO elements have crept into Undead’s work. As you use a survivor, you’ll level them up; the same is true, though to a lesser extent, to the one AI partner you can ask to tag along. A once simple recruit will turn into a citizen of the base, then a hero. At that latter level, you can choose to promote the character to the leader of the group, then changing State of Decay’s storyline to help fulfil a particular class-based legacy. Before you get to the meat of that arc, you’ll need to track down and extinguish Plague Hearts that are corrupting the area around your small community.

Those Plague Hearts are not easy to beat. Pulsating, bloody messes, they change the zombies around them into vicious beasts, capable of not only killing you but raising the level of infection in your own bloodstream. If you try to defeat a Heart using melee, you’ll quickly exhaust your stamina, making you easy prey for the zombies who’ll rush in to protect their hub. Guns work better, but the noise they make attract even more of the undead. Explosives like C4 and Molotov cocktails are your best bet, but they require scavenging to either find said items or find enough components to craft them.

That is, if you can even craft the items. Your base has several slots in which you can build items like a garden, auto shop and forge, though they’re dependent on several skills that your survivors may or may not have. Need a mechanic to build an auto shop and upgrade a vehicle? Simple; run across a survivor who has said skill and build rapport with them to convince them to join your group, or stumble across a book so an existing survivor can learn the required skill. As you recruit more and more useful survivors into your camp, the rate at which you consume supplies increases; you’re constantly aware of the mouths you need to feed… and of the undead mouths you don’t want to be feeding. 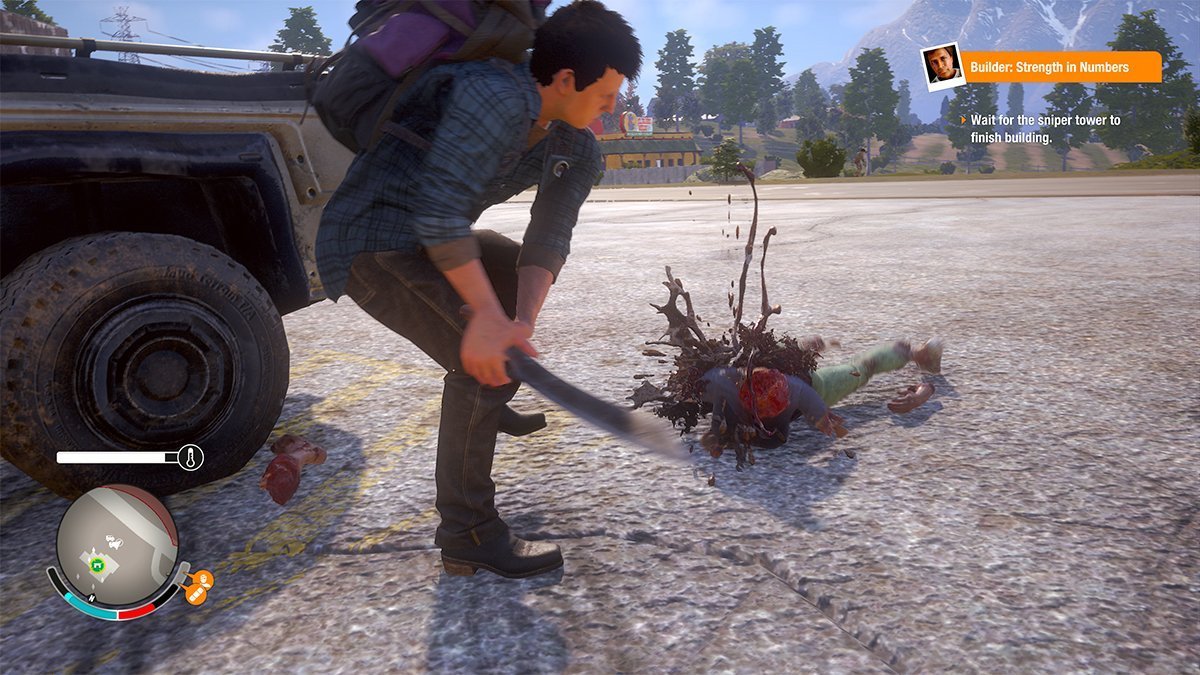 The result of all these systems provides a wonderful sandbox that effortlessly consumed an entire weekend of my time. When I wasn’t playing the game, scavenging medicine or crafting a blood plague antidote for a character I pushed a little too hard, I was quickly eating dinner in the real world, thinking of areas of the map I hadn’t yet pilfered. I grew attached to my original core group of three and had to take a couple minutes the mourn one after running into my first Juggernaut, causing him to literally be ripped in half as a horde of undead then moved in to feast on his remains. I’d swear at myself as I limped into base with a critically injured survivor after deciding to quickly venture out with a half-broken bladed weapon that quickly failed and left me practically defenceless. Finding enough resources to patch up the survivor (and her weapon) meant I’d have to postpone my next two planned excursions.

I was wholly immersed in the experience until State of Decay 2’s jagged edges became more and more noticeable. A rather impressive draw distance on Xbox One X (enhanced on a 4K TV) meant I continually spotted zombies spawning high up in the clouds, dropping down to the roads and pastures of the valley, then standing in wait to attack me. I couldn’t help but laugh as one of my original survivors answered a call for help from a nearby enclave only to discover it was led by his identical twin. After painstakingly finding, fixing and fuelling a high-grade military vehicle, I lamented as my powerful utility truck (full of live-giving rucksacks, mind you) got stuck on a small rock and couldn’t be dislodged. Hell, when using the game’s radio system (which can also queue up multiplayer), you’ll notice there’s a call you can make when your character gets stuck on geometry; sadly, that call doesn’t work for the vehicles you may be inside. 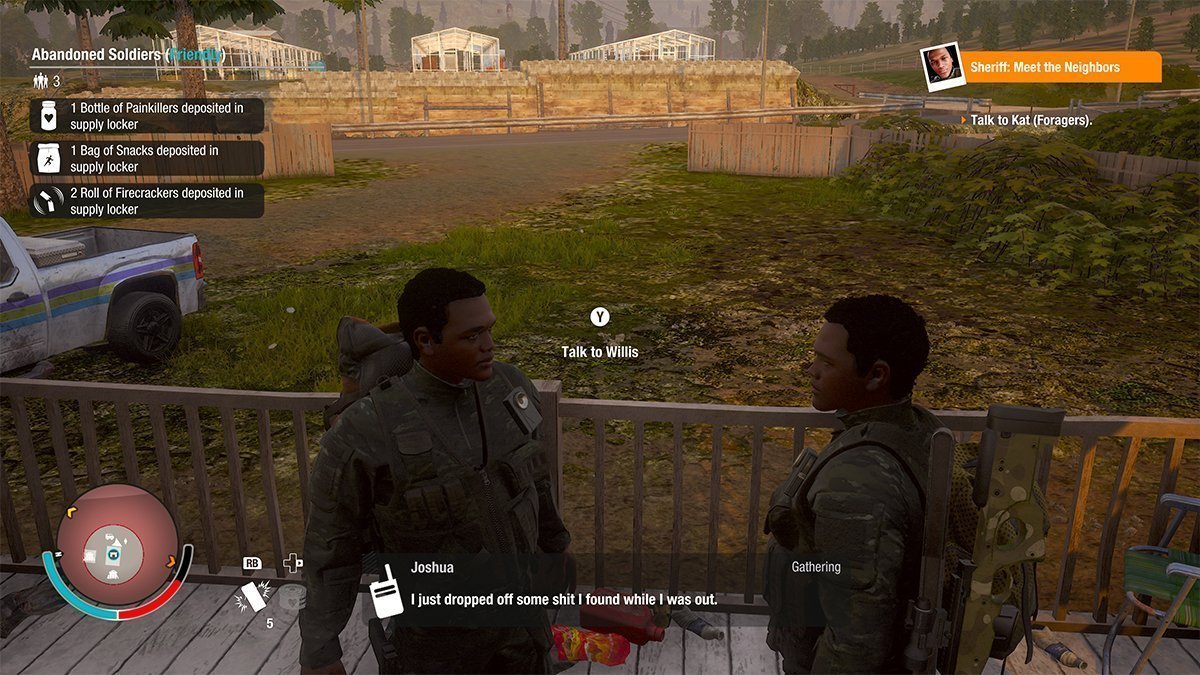 There’s more. About halfway through my first community’s playthrough, infestations – mini-dungeons, really – stopped popping up on my map, though my group of survivors were sure getting anxious that they were around somewhere, unseen. I was asked to clear out the gathering of the undead but couldn’t find where said sources were. Upon finding one, I had trouble clearing it because a zombie lived under the floor. When I couldn’t find other infestations, camp morale went down. Way down.

The lack of morale wasn’t that critical in the end, just annoying. I lost count of the amount of times a single survivor’s morale was so low that he or she threatened to walk out on the group. Ignoring the fact the poor SOB would have nowhere to go if they made good on their threat, I never actually needed to worry. As many times as someone immediately threatened to defect, they’d call me back on the radio to tell me what they had a change of heart. “Stop wasting my time then,” I eventually started screaming back at the TV and the survivor. While they were sad that our camp was a little too noisy and could attract zombies, I was out in the field fending off a Feral, a Screamer and a horde that had gathered around a Plague Heart. Perspective matters, people.

Despite these flaws, State of Decay 2 is incredibly enjoyable, and at the budget price of $49.95 AUD, absolutely worth the purchase. Most of the glitches I encountered only added to the sense of desperation Undead Labs wanted to bring to the table. That said, I can easily see how those problems could quickly become game-breaking. Just ahead of review, a 6.2GB patch on Xbox One (and around 4GB on Windows PC) became available for download; I’m honestly unsure at what the patch addresses and a Microsoft representative has sadly confirmed we won’t be provided further details.

State of Decay 2 was reviewed using a promotional code on Xbox One X (primary) and Windows 10 PC (secondary), as provided by the publisher. Click here to learn more about Stevivor’s scoring scale.