Set in the nuTrek timeline – the one where Chris Pine is Captain Kirk and there’s always an abundance of lens flare – Bridge Crew places you and three friends as the senior officers of the U.S.S. Aegis. Serial NX-1787, the Aegis is a prototype starship that aims for stealthy, silent running. Its profile is long and slender, designed to complement systems that suppress energy signatures. You and your friends fill essential roles: the commanding Captain, the ace pilot Helmsman, the crack shot Tactical officer and the miracle working Engineer.

The social aspect really is two-fold: while it’s important to work with others to be the most efficient Starfleet crew possible, Bridge Crew excels because it lets you cosplay with other Star Trek fans. A single Captain can go it alone, commanding AI crewmembers and jumping into crew stations when needed, but it’s nowhere near as immersive or joyous in this fashion. Playing on your own, Bridge Crew is more an exercise in time and resource management rather than a sci-fi simulator. 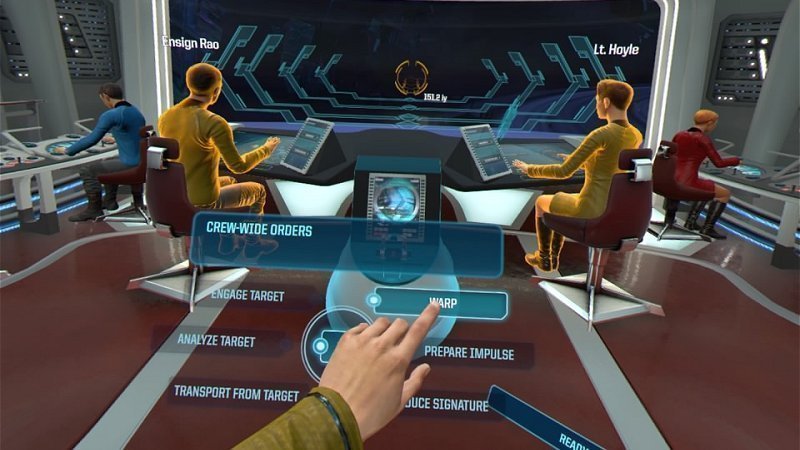 Alone or in a group, no officer can do it alone. The Engineer must power warp coils before the Helmsman can jump to warp. The officer at the Helm must work with both the Engineer and the Tactical officer to get into — or extend — phaser range whilst in combat. The Captain is expected to coordinate all efforts, ordering that shields are dropped to rescue those stranded in life pods and raised to protect the Aegis from attacks by Klingons or nefarious pirates. Success comes from careful planning, communication and coordination.

Control-wise, the PlayStation VR Move and Oculus Touch controllers work as your left and right hands. Associated buttons on each press buttons, grab throttles and toggle (the absolutely gorgeous) space view on and off. The Touch controllers were just a bit easier to use than the ageing Move controllers, but movements and actions with both are extremely intuitive. Those control styles — and, assumedly the HTC Vive equivalent, even though we’ve not used it — are leaps and bounds better than the DualShock 4; on it, your thumbsticks and triggers allow for movement and action. It takes far longer to do anything with the DualShock, and far worse, you can’t wave to your fellow players. It makes things oddly discomforting.

If you don’t have three pre-selected friends, you’re not forced to play solo. While pre-release matchmaking was sparse, Bridge Crew supports multi-platform play. This means those on PlayStation VR will be able to partner with those on Oculus Rift and HTC Vive. This makes mandatory action of logging into Ubisoft Club a necessary evil — it’s what gathers players from the platforms together. While you can use the functionality to group up with your friends, it’s unclear if generalised matchmaking will gather players from the different VR platforms together in Quick Play. We’ve put the question to Ubisoft and will update this review when the publisher responds. 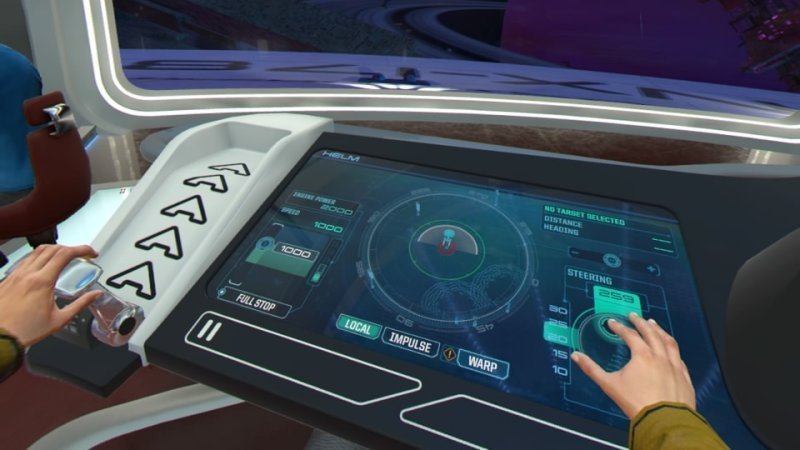 While Bridge Crew nails the look and feel of the Star Trek universe, its campaign is extremely limited. Only five main missions are on offer, sandwiched between a tutorial and its expanded version. While that latter tutorial is firmly rooted in Star Trek lore and amazing to play out as a fan, it’s simply not enough. Worse yet, it’s clear that connective pieces are missing between each of the campaign’s meagre set of missions, suggesting that more were planned yet weren’t delivered.

Bridge Crew — even after two delays — reeks of unfinished promise. The campaign’s main goal is discarded almost immediately, replaced by a shoot ‘em up premise far removed from the Aegis’ specialisation. It’s the opposite of both Red Storm’s intentions and those of Starfleet itself.

“The Aegis is intended to explore,” Achilli told us back in the day. “It’s intended to scout. The gameplay itself will focus a lot on those activities.”

To explore strange new worlds. To seek out new life and new civilizations. To boldly go where no one has gone before. 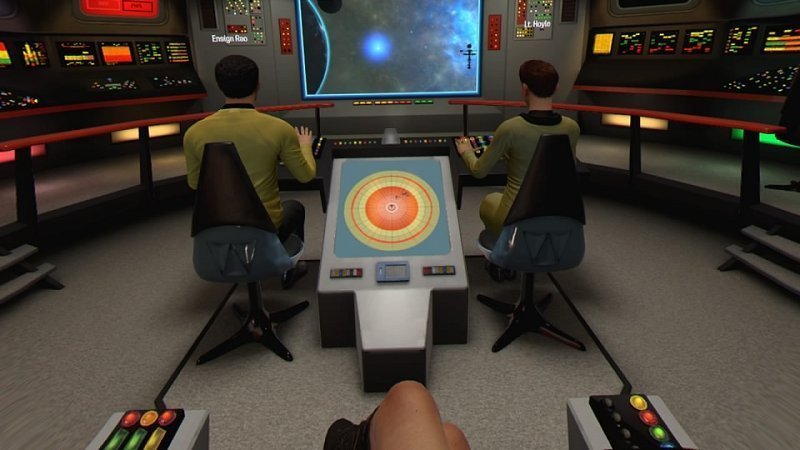 In an extreme letdown, gameplay doesn’t mirror this.  Then again, one could argue that nuTrek on the whole makes this mistake, so it’s forgivable for Bridge Crew to follow suit. The procedurally-generated Ongoing Voyages mode provide more mission variety but ultimately follows a relatively repetitive structure. You’ll recognise mission types almost immediately, and then it’s a by-the-book set of procedures to get the job done. Beam this up. Scan this. Disrupt that system. Shoot that.

While the bridge of the Aegis is best with friends, it’s far easier to tackle the bridge of the original U.S.S. Enterprise on your own. As we’ve stated previously, its wholly analogue stations aren’t labelled; does the red button near the fire phasers, or does it lower shields? Rather than make a fatal mistake, it’s easier to command as the Captain and know your AI crew will get it right. Regardless, I found great pleasure in simply loading up a mission then simply sitting on the bridge, doing nothing. It’s every Star Trek fan’s dream to sit on that bridge, and I finally got my chance. I rightfully drank the sights and sounds in. I can only hope that Red Storm offers up the bridges of the Enterprise-D, Voyager and the Defiant as an apology for a lack of content.

In my original preview of Bridge Crew, I said the game was “worth buying a VR unit for.” Admittedly, that claim was made without the knowledge that I’d already played 25% of its campaign in my short preview opportunity. Having the finished product in my hands (or wrapped around my head), I mostly stand by this claim. For Star Trek die-hards — I loathe the term Trekkie — this is worth getting a PSVR, Vive or Oculus. Ideally, you’ve also got a core group of friends to embark upon missions with as well; that, not a limited set of missions, is where its fun is truly found.

Star Trek: Bridge Crew was reviewed using a promotional code on PS4 and PlayStation VR (Move and DualShock 4-controlled), as provided by the publisher. Click here to learn more about Stevivor’s scoring scale.