Taking on the role of a young boy you wash ashore on a seemingly uninhabited island, filled with ruins and relics of a bygone society. Roaming across the area, your eye is naturally drawn to a massive white tower that dominates the landscape – but its purpose, and how to reach it, is a mystery.

Mechanically, RiME will remind many players of similar games like Journey or The Witness – an open area filled with things to investigate. RiME’s island has an easy to spot primary path, but is filled with side sections and corners to investigate for the more exploratory player. After a few initial puzzles, you will uncover a fox spirit guide who acts as a kind of waypoint marker, guiding you to the next primary task. 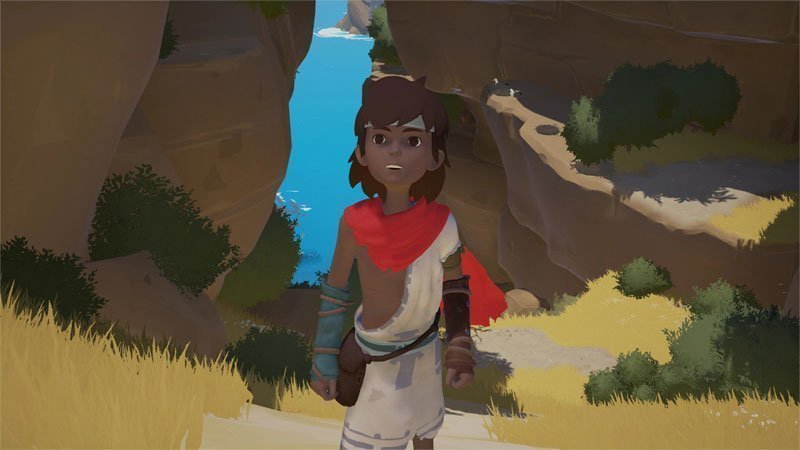 RiME focuses heavily on visual language above all to guide its player. Its stark, brightly coloured landscapes are designed to direct you to the next important element without any spoken or written dialogue. That’s not to say the game is without a voice, however – the boy’s voice comes into play throughout as a gameplay element, humming or shouting to interact with the world around him. Certain colours are used signify different levels of importance or interaction, with gold highlighting objects you can affect, jade green for things your voice can interact with, and red for important elements in the game’s narrative (such as the boy’s red scarf and your fox guide).

The boy’s voice is particularly effective in drawing you in – he’ll hum as he wanders around, shout to objects like flames or urns to increase or destroy them respectively, and gasp in fear if there’s a threat nearby. They’re small touches, but they do help you connect with your (mostly) silent protagonist.

Having such a strong environmental storytelling structure is important, because the other great thing about RiME is that it has practically no UI to speak of. No compass, no minimap, no objective markers on screen whatsoever. While you may occasionally receive a prompt for what button to press when approaching a certain environmental element, these are limited to first times and if you’re hovering without doing anything – RiME’s way of gently reminding you how to play, without shouting at you constantly with pesky tool-tips as many games would. When swimming or being hunted by predatory presences you’ll gain a warning in the form of screen effects darkening your view – simple touches that don’t take away from the general freedom from on-screen interruptions. 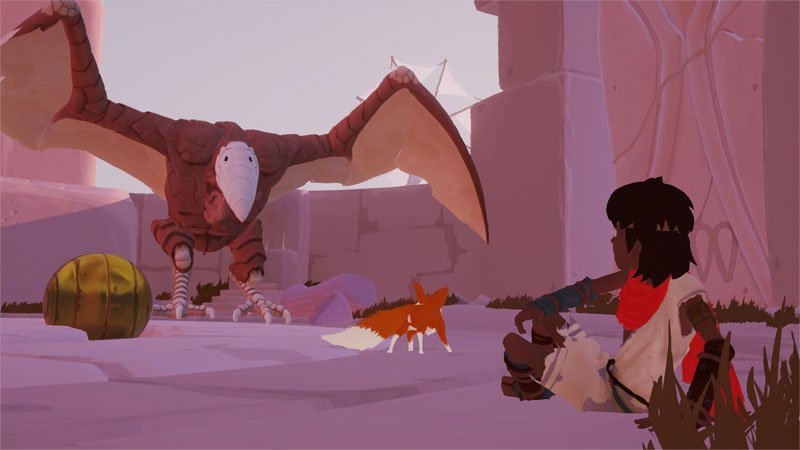 The puzzles themselves are simple, but varied. Each area you move through tends to have a theme to its challenges, meaning you’re not repeating the same task for too long without having something new thrown at you. Many puzzles involve affecting your environment in unexpected ways, letting you feel powerful while still utterly clueless about what’s going on.

For those who do want to understand the story of the island, everything is there for you to find. Story is delivered through murals and paintings scattered around the island, which also occasionally act as tutorial prompts on how to approach your current challenge. You’ll also find several layers of collectibles sequestered away from the main path, including animal toys, lullabies, hidden keyholes and broken-up medallions. Each adds more to the narrative of the game, without being necessary to enjoy your experience with the game.

All in all, RiME is exactly the game I like to slowly work my way through. A deeply atmospheric world with some challenge, without frustrating me with its obtuse inner logic (cough cough, The Witness, cough). The boy is endearing as an avatar, shouting and scrambling his way along with you, and the soundtrack would put anyone at ease.  Sit back, relax, and shout some urns apart.

RiME was reviewed using a promotional code on PS4, as provided by the publisher. Click here to learn more about Stevivor’s scoring scale.