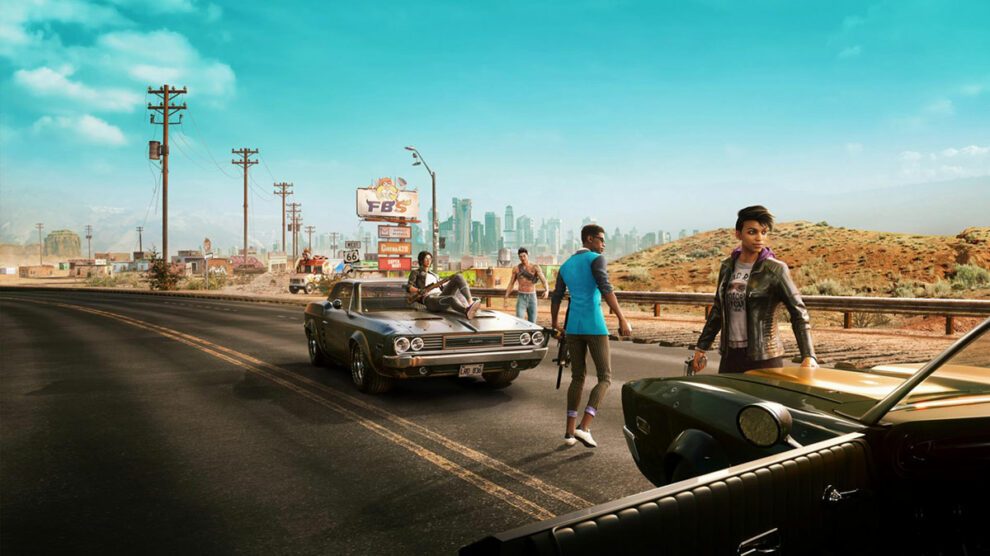 Saints Row gets the gang back together, but needed more time to complete its comeback.

Saints Row returns after an almighty layoff with promises of a lavish reboot that keeps its joshing sense of humour and penchant for mayhem. Unfortunately, it doesn’t achieve that goal. I’m not sure it even set out to.

Reboots need to revitalise and update gameplay, while refreshing and modernising as they bring something new to the table. Saints Row doesn’t do that and feels like a direct sequel to 2013’s Saints Row 4 – with gameplay that somehow feels even older. It’s more of a reset in story and tone than a proper reboot.

In that regard, it succeeds by dialling back the farcical lunacy that got out of hand in Saints Row 4, but this isn’t the semi-serious gang wars of 2006’s original Saints Row, or even its highly-regarded sequel. Instead, it lands somewhere in the middle, keen to keep its absurdity in-check, without taking itself seriously or infringing anywhere near GTA’s remit.

Yes, you can adjust the bulge size of your Ken-doll gentleman’s region, or free the nipple and select your cup size (including man boobs). Consider that the best indication of Saints Row’s sense of humour and how it positions itself as a big parody of every gang or street crime story you’ve ever seen.

While there’s a bit too much cringe, I don’t mind it. Saints Row is meant to be over-the-top and a bit ridiculous. It leaned too much into that in its last outing, to the point it was a detriment. This Saints Row finds a better balance, and much of the humour is framed by your revolving door of playable characters. 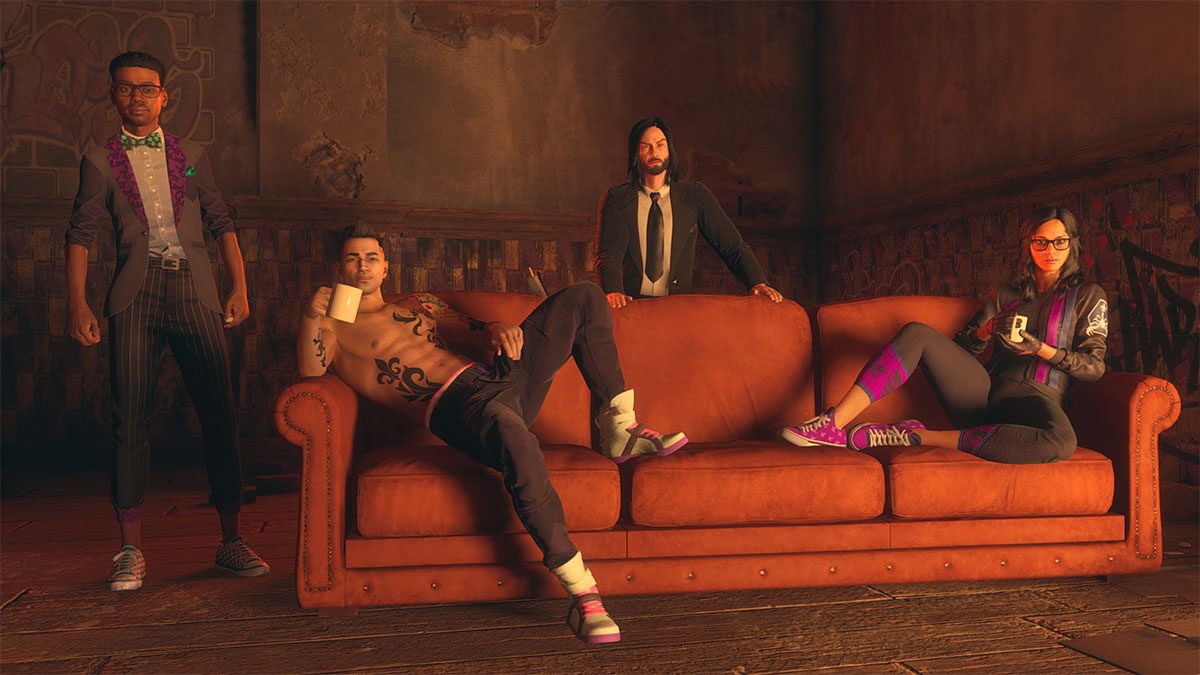 You’ll start by selecting, and customising, from a selection of pre-made characters called Bosses. You play as the leader of your new gang, simply called the Saints, who end up trying to take control of the fictional southwest American city of Santo Ileso from a series of rival gangs. These characters look vastly different and can be swapped at any time.

Fun is what you make of it. In my case, that meant hot swapping between a British woman, a portly American bloke, and unofficially Keanu Reeves as John Wick and Bryan Cranston as Heisenberg – the latter two being downloaded from community creations. The narrative presents as if you’re always the same person, but dry British woman vs John Wick make two otherwise identical scenes playout very differently.

The problems begin when you actually start playing Saints Row. Simply put, this game isn’t ready. It’s riddled with bugs and glitches that go beyond quirky mishaps. I’ve had numerous crashes, ridiculous AI encounters and inexplicable explosions that suddenly end missions. Couple them with problematic collision detection, co-op issues and auto-saves deleting themselves, and Saints Row clearly would have benefited from joining the 2022 class of delays. 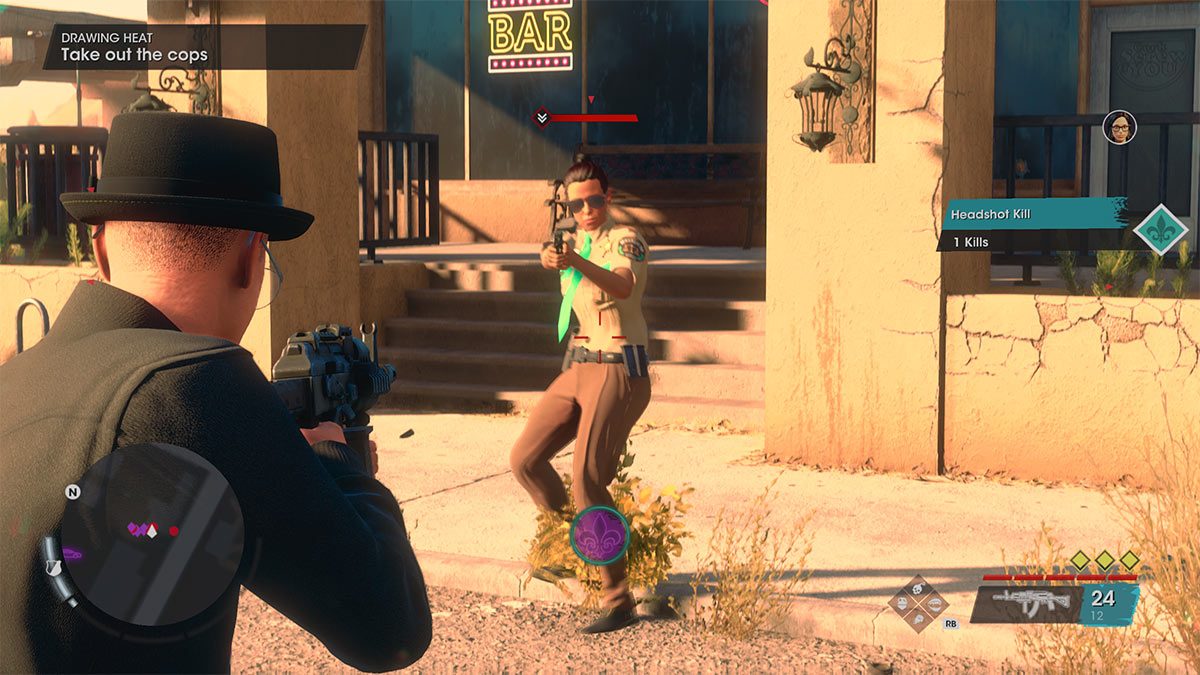 The significant lack of polish aside, Saints Row could have been a decent game that played it too safe as a reboot. It lacks innovation and dishes up too much of the same, as none of its ideas are fleshed out enough. There is a great deal of diversity in mission scope and premise in the set-up, but then it’s all abandoned when you reach gameplay. Whereas previous games genuinely tried to offer a variety of ways to go on murdering sprees, to varying degrees of success, this Saints Row does not.

You go from a massive raid, to needing to collect donuts for your team, to stealing art sculptures, to a chopper attack, to playing make believe in a LARP, to a prison break, to towing (not) Walter White’s meth lab RV, to robbing a train on hoverbikes, to leaving bad reviews on the phony Google Maps app. There’s a nice variety of scenarios, but they’re all abandoned almost immediately and follow exactly the same mission structure: an outdated third-person shooter, or a very floaty vehicle sequence with excessive explosions.

Therein lies the biggest problem: Saints Rows’ primary gameplay is murdering thousands of clones of the same goons. It doesn’t matter what the set-up is – if you give a donut store a bad rating, you’ll need to slay 35 generic baddies to end the mission.

That would have been a predictable retooling of previous games, had the combat been revitalised. But it feels seriously out of date, with combat elements commonplace in the mid-2000s, and even earlier; shooting mechanics feel like they’ve been ripped straight out of 2007. There’s no option to take cover, and the bullet sponge AI is horrendously bad. Hordes of enemies mostly stand in open corridors firing, mirroring each other’s animations, with the occasional sideways summersault reminiscent of GoldenEye on N64. 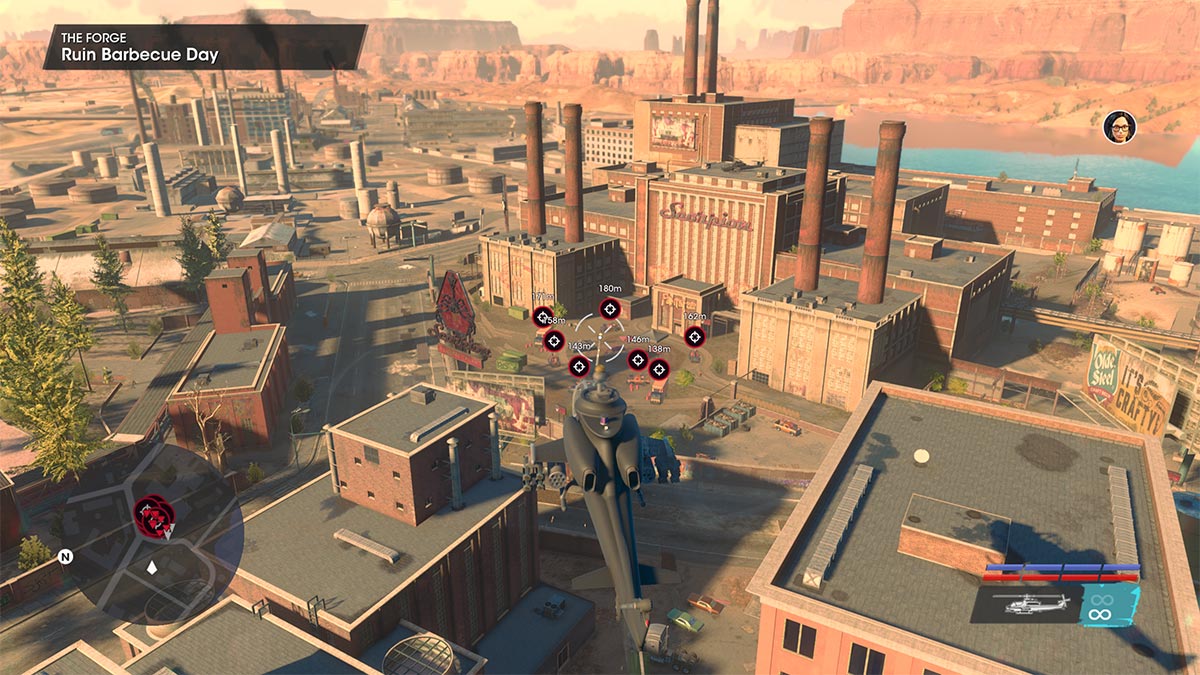 There are skills and perks that briefly alleviate the monotony, but these don’t always trigger correctly or have issues with janky animations that take far too long with so much murdering required. There’s even a mission that pokes fun at itself, promising a team bonding “murder-free day”. But, of course, that features a lot of murdering.

Despite the limited formula and lack of variety, there’s still an enjoyable experience underneath that plays it too safe and lacks innovation, had it been more polished. Combat is extremely clunky, vehicles control terribly, and the AI would have been laughed at two console generations ago. As well as questionable corridor shooting strategies, there are numerous vehicle sequences in which the baddies will just sit in their car and wait to be shot in the head if you exit your vehicle – but they’re basically kamikaze pilots behind the wheel.

Gameplay is dated, buggy and old, and the visuals aren’t far behind. Saints Row looks like an Xbox 360 game remastered in 2014. While I really like the range of character customisation and being able to swap between them, they all look dead inside. Keanu may have unlocked the fountain of youth in real life, but his unofficial appearance in Saints Row has aged him terribly; and that’s true for all characters. Breathtaking, it is not. 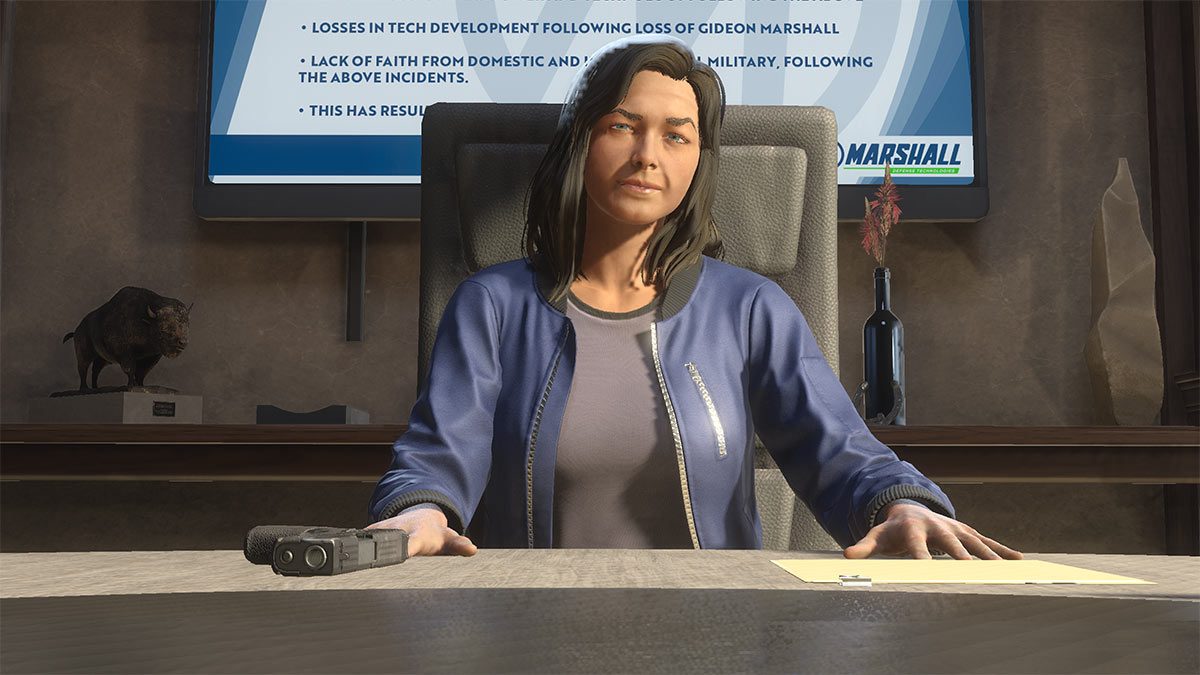 The world looks a little better, but overall it feels lifeless and bland. It’s been a criticism of past Saints Row games, and in keeping with the theme of a reboot in need of more rebooting, it hasn’t been addressed much here. There are some cool parody references lurking within but on the whole, it feels like a fairly lifeless sandbox, which isn’t helped by cars and pedestrians very visibly appearing and disappearing without warning.

In good news, Saints Row offers plenty of customisation, beyond your character, on current-gen consoles. You’ll be able to choose between 1080p, 1440p and 4K resolutions with a mixture of modes prioritising frame rate or quality. Choose framerate; this isn’t a looker no matter how you spin it.

There is also a raft of gameplay customisation and accessibility options, including automating quick-time events and removing timers on timed missions – and more games should do this. I’ve played on the default difficulty, where enemies are bullet sponges and random explosions can send you back to a checkpoint ages ago. There are slider options to customise specific aspects of the challenge, should you want enemies to go down easier or driving sections to be extremely challenging. While it’s nice to have such customisation rather than the standard ‘easy, normal, hard’ arrangements, the gameplay it is adapting isn’t strong enough to allow it to really shine. 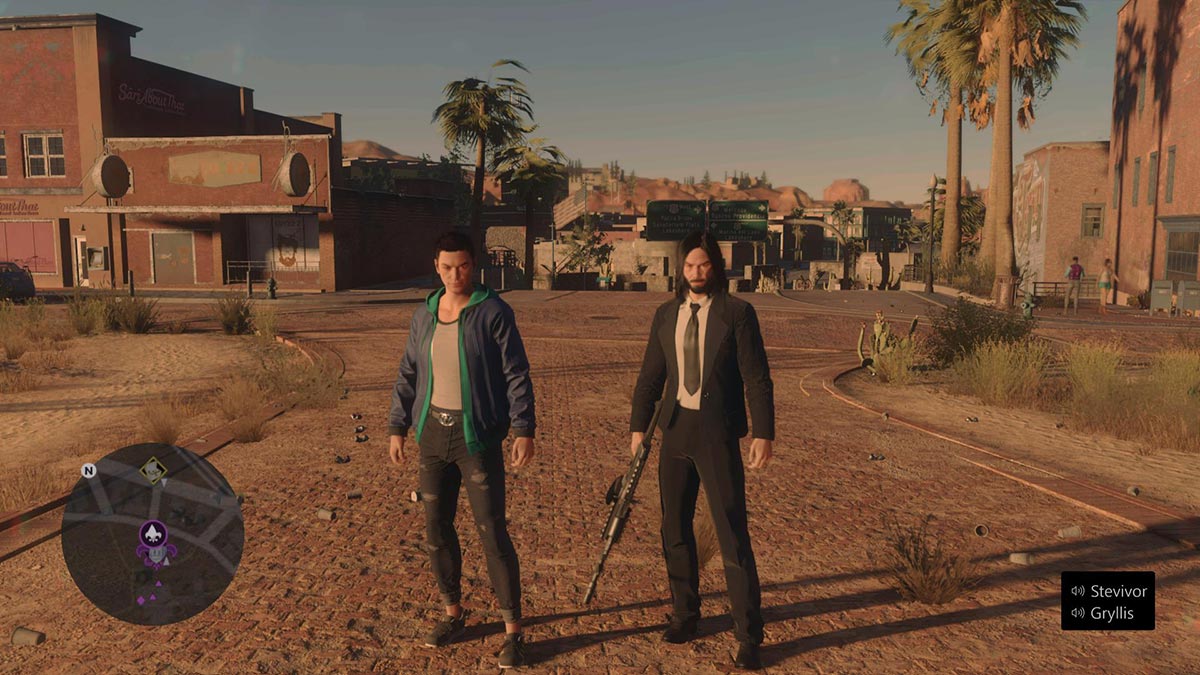 On the multiplayer front, Saints Row offers drop-in and out co-op after the first few missions. We had a lot of trouble trying to play pre-release, as the game crashed several times and then either hadn’t saved or wouldn’t let us reconnect; somehow as if the crash had severed an in-game connection between us. When it did work, there were game-breaking issues like both of us appearing in the same car to one player, but being in two different vehicles to the other – which led to mission failure.

Once these kinks are ironed out, co-op still isn’t something I’ll return to. It just doesn’t make sense in such a single-player focused structure. Saints Row is a classic example of co-op for the sake of it, and it commits the cardinal sin of not allowing both players to keep their progress; only the host moves forward. If you’re going to have a 25 hour+ mission-based game with co-op, there needs to be a way for both players to retain their progress, beyond the XP or currency earned. Or even a mission skip.

Simply put, of the two Saints Row games released for current-gen consoles, it’s disappointing that Saints Row (2022) is clearly lagging behind Saints Row The Third Remastered in every facet. That’s originally a 2011 game that has better combat and controlling vehicles, looks about the same with more detailed character models, has a wider range of gameplay variety and isn’t plagued by the same serious issues.

For all the glitches and ridiculous mission failures outside of my control, the most frustrating aspect is getting stuck on a loading screen that never loads, several times now. This has happened on multiple occasions after major, very long, missions. Each time I’ve had to restart and found my recent autosaves have all disappeared and regressed to an earlier version. It’s hard to muster the enthusiasm to replay the same chunk of goon murdering, unsure if it’s just going to get stuck again. Hot tip: manually save, and do it often.

For all its shortcomings, I’ve still enjoyed moments of mindless, though quite dated and repetitive, mayhem in Saints Row. It’s like a direct-to-video movie that could and should have been so much more, but still provides some enjoyment.

Saints Row finds a better tone than its predecessor, but otherwise doesn’t deliver as a reboot, with gameplay and mission structures inferior to past instalments. With the right expectations, there’s still fun to be had, but the endless bugs, glitches and just awful AI make it hard to recommend at launch. Perhaps best to wait for the inevitable Xbox Game Pass or PlayStation Plus Extra release, after it’s been well patched. 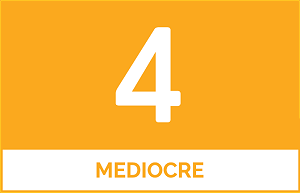 Saints Row was reviewed using a promotional code on Xbox Series X, as provided by the publisher. Click here to learn more about Stevivor’s scoring scale.