What comes before the Second Son? Shame on you if you thought it was the first son, because it’s actually (Infamous:) First Light. This is the tale of Abigail ‘Fetch’ Walker: a street urchin-turned-noble gas-toting assassin, and how she became the vigilante you met her as in the PS4 near-launch title.

The concept of standalone DLC is brilliant. If you don’t own the full game, you can still play and enjoy First Light. Moreover, because this is a prequel to Second Son, you can use it as a measuring stick to see you’ll like the original game enough to buy it. If you already own the original game, you’ll walk away with a few extra feautres; really, everybody wins. Given how many PS4 games were around when Infamous: Second Son was released, I’d assume that most of you with a PS4 already own the base title. Looking at the numbers however, it appears that only around 10% of you do. Sucker Punch is clearly aware of this, and the idea of releasing a standalone DLC to entice those who missed out or simply didn’t bother is a good one.

There is a surprising amount to do in First Light; if you power through it, you could finish the game in around two hours. If you spend some time exploring and collecting bits and pieces around the map as you go there’s a decent six hours of gameplay. Add the post game Curdun Cay Battle Arena missions and you have very respectable piece of DLC filled with more than is expected for a similar price these days. In terms of size, it’s set mostly on the one of the islands from Second Son with a few extra areas thrown in. 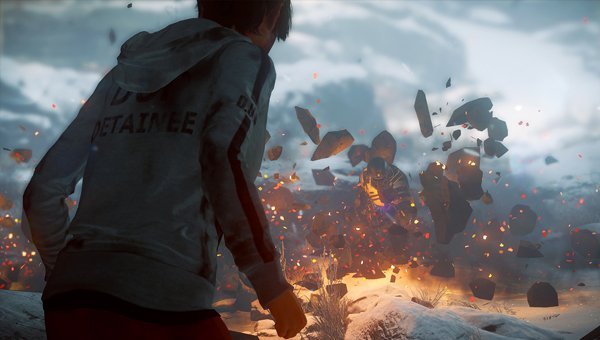 The story is told through flashbacks and although it works, it makes the game feel a little segmented and hurts the flow of the story. This is due to the way in which the story is told, how the game is played and the manner that new mechanics are introduced. It’s not a deal breaker, but playing the game in one sitting means it suffers a little with some obvious breaks in continuity. On the other hand, if you don’t want to play it all in one shot you could use these breaks to divide the game up into a few smaller chunks.

Lets talk about Brent. Brent is Fetch’s brother and Brent is also a very important part of the plot. Unfortunately for Brent there is something about Brent that bugged me a lot… about Brent. If you haven’t picked up on it yet, you may just get through First Light without even noticing it… but after a while I started noticing the amount of times the word “Brent” appeared in almost every bit of dialogue. Sure, he’s important, but if you say a word over and over again it starts to lose all meaning and become a little frustrating. It’s a minor gripe and really other than the slightly sketchy pacing the narrative is fantastic.

Origin stories tend to follow a standard formula in video games and this is no exception. The protagonist struggles through hardships and eventually overcomes them to become a righteous badass. The most important things are to make it believable, interesting and show how the character changes. First Light does all of that and manages to improve on the already established neon powers from Second Son. The powers in-game are cool, but for me it’s all about First Light‘s story. It gives the title the strength to stand on its own. No pun intended. 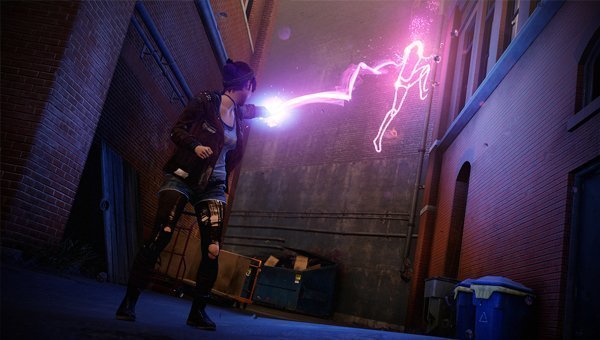 The final chapter is intense and really brings the narrative of the DLC together. Without spoiling anything, Fetch becomes an arse-kicking machine and her general demeanour in Second Son is well-explained. Not only that, but it’s easy to see why she is the way she is and empathize with her to a certain extent. First Light gives us an excellent example of a strong female character in video games. She can hold her own and she’s not just some big-boobed eye candy bimbo introduced to appeal to the masses. The topic of women in games has been a hot issue for a long time now, but it’s worth pointing out because this game shows how it’s done right.

If you haven’t played Infamous: Second Son and you’re more comfortable rolling the dice on a $25 AUD prequel than the full-priced game to see if its up your alley, this is a smart move. If Second Son left you wanting a little more, again it’s a good idea to pick up First Light. The amount of content included makes it more than fair for its price; if that’s not enough, the game’s story makes it a must-have for those of you with a PS4 and nothing to play on it. Infamous: First Light is available now digitally on the PlayStation Store and a retail version is set to launch on 10 September.