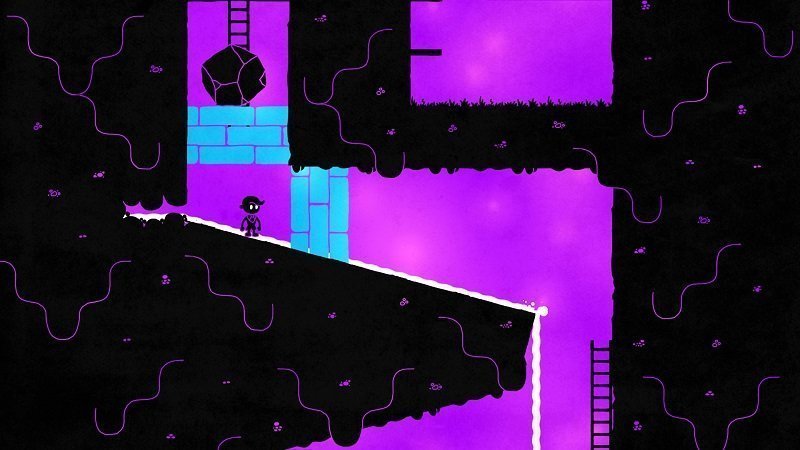 The well of 2D puzzle platforming is just about tapped dry. Time manipulation, shape stacking, traversing terrifying nightmare-scapes as a young boy, being a marble — just about every combination has been tried and mostly delivered upon. I doubt Hue is the first such game to look to colour as its core mechanic, but to its credit the implementation is unique and largely successful.

Hue sees you using colour manipulation to change the world around you. Using a colour wheel accessed on the right stick, you change the shade of the level background and with it make similarly coloured objects and obstacles disappear. This starts simply; make the background blue and those blue rocks that were blocking your way are no more, but by Hue’s conclusion five hours later you will have a full palette of eight shades, changing colours mid jump to make your destination platform appear or manipulating falling blocks through paint fountains to get them the exact colour for a later plan. 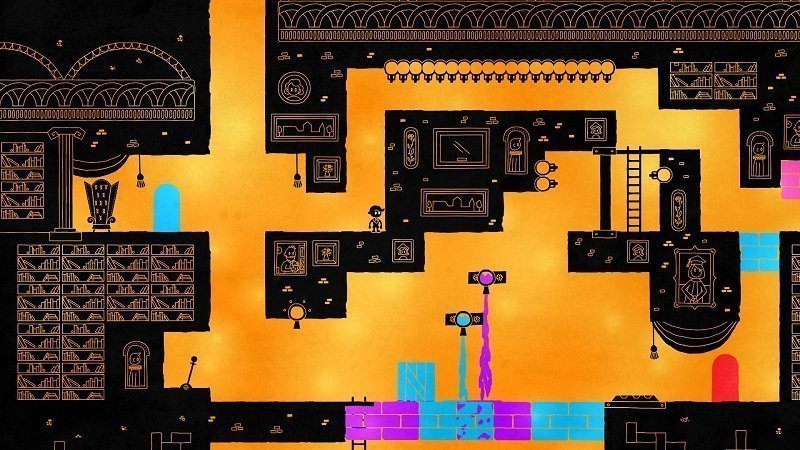 The first half of Hue is a gradual curve, unlocking and introducing the eight colours (all colours are functionally identical, though juggling a full palette opens up more complex puzzle situations) and the various elements you will use to progress. I found myself unchallenged for most of these early stages and often found tiresome the gap between solving the puzzle in my head and executing the movements and manipulations of crates and colours to achieve said solution.

That all changed once the second act began, I encountered several levels that required a good long mulling over and the sense of satisfaction that great puzzle games provide is on full display here. Most of the challenge is provided by the sheer number of moving parts you must manipulate, though all puzzles are restricted to “how do I get there?” or “how do I move that box over here?”, though near every permutation of the mechanics is explored in creating the puzzles in Hue.

There are a few challenges that require moderate twitch skills but nothing that should put off anybody interested in testing their grey matter but not their dexterity. Hue moves in slow motion while the colour-wheel is selected, allowing you to easily pinpoint time any jumps and colour changes, and the controls are simple with only a jump and use button available. Your jump is always a set height, a trick used to dastardly effect in some puzzles. 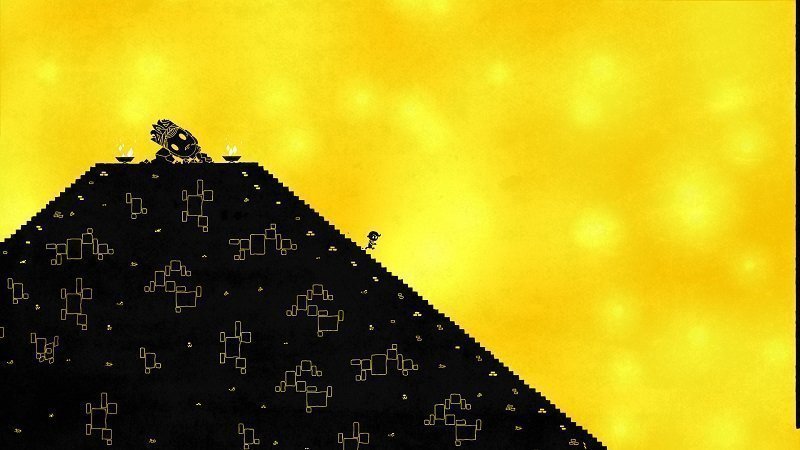 Hue presents a wonderful atmosphere for puzzle solving. A haunting but subdued piano soundtrack accompanies the entire game, occasionally upping the tempo in the rare chase scenarios. The colours are vibrant though the need to use a full palette will occasionally see you produce some eye-bleeding combinations such as pink on a green background or the near indistinguishable yellow on lime green. There is a colourblind mode that adds symbols to each object along with their colour, a clever solution to an obvious problem though one I can’t verify the effectiveness of.

I do wish that Hue went further with some of its ideas. Often I found everything you need for a puzzle is made available to you and nothing more, reducing the solution to “see a box, get to the box, move the box”, challenging in itself but I felt a layer of the solution was handed to me just by the presence of a crate or a switch, there is no deception or even option in many cases. The few times an element of the level was not directly related to the puzzle you could be sure it led to a flask, the games only collectibles that range from cleverly well hidden to “just walk through this wall to find one”.

The early pace of Hue was leading me to disappointment, but the stellar second act was more than enough reward for that labour. Hue delivers a polished package and a strong platform puzzle game, it isn’t a Braid or Limbo but merely evoking those names can be taken as a sign of quality that Hue most certainly possesses.

Hue was reviewed using a promotional code on Xbox One, as provided by the publisher.