When it comes to Japanese RPGs, I’ve been on a slippery slope the last few years. My love of RPGs in general worked in concert with Tumblr’s love of the Persona series to lead me to Persona 4 Golden. My investment in Persona then let me slip sideways into last year’s Persona Q: Shadow of the Labyrinth, a cooperative effort between that series and the Etrian Odyssey series’ style of gameplay. That in turn dropped me into Etrian Odyssey Untold earlier this year, and now? I’m once again falling sideways into another crossover, with Etrian Mystery Dungeon.

Etrian Mystery Dungeon is a similar project to Persona Q, in that it’s a collaborative effort between two existing RPG franchises. In addition to the obvious Etrian component, the backbone of the game design comes from the ongoing Mystery Dungeon franchise. Porbably best known on this side of the world for the Pokemon Mystery Dungeon subset, the games are dungeon-crawlers with a top-down view, randomly generated maps and a turn-based combat system.

Your party is given a slowly-declining hunger meter, limiting your time in any dungeon unless you bring food along to keep your team content. Not for the faint of heart, the games also punish those who fall in their dungeons with the loss of half to all of their items and money – a steep price for an entirely unpredictable adventure. 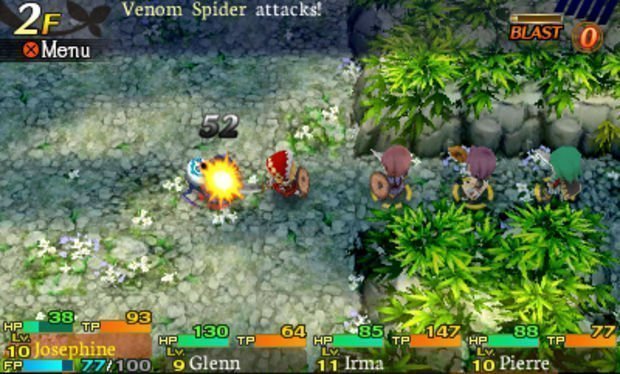 Etrian Mystery Dungeon combines this tough gameplay model with Etrian Odyssey’s lush visual style and score, and incorporates some of its own mechanics to boot. Much like Etrian Odyssey Untold, the game contains a variety of classes to select form when building your party, and has a customisable skill tree for you to upgrade each member based on your preferred play style.

The classes will feel immediately familiar if you have played any of the Odyssey games as they embody the same class archetypes: Medic, Hexer, Protector, Gunner, the difficult-to-pronounce Landsknecht and so on. Thanks to the Mystery Dungeon influence you also gain access to the Wanderer class, a nod to the popular Mystery Dungeon subseries Shiren the Wanderer.

Combat within the game seems simple, but is more difficult to handle than one would expect. Other than boss battles, you typically only control the leader character of the party, with the other three members following behind and operating on AI control. Luckily they mostly behave themselves (though in my experience they had a bad habit of bottlenecking themselves to get out of fights), but the ability to set a specific formation allows you some measure of control over your combat approach. Usable party member skills and ‘Blast’ party skills keep the game from being nothing more than ‘tap A to hit the other guy’, and enemies will happily swarm you to divide focus and mess with whatever strategies you thought you had. 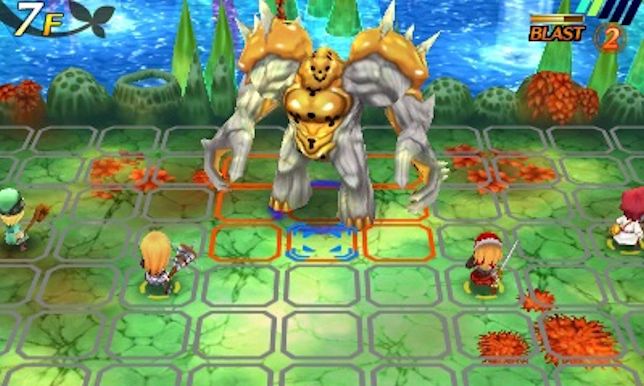 The game also features the Etrian Odyssey standard of tougher enemies wandering various levels of the dungeon, known here as DOEs. The big difference is that rather than patrolling a particular level or chasing after your party, each DOE is determined to climb up out of the dungeon and attack your home base, the town of Aslarga. You can keep the town safe by placing defensive forts on various levels of the dungeon, with the added bonus that they lock the map of that dungeon floor to prevent it randomising the next time you pass through. Manned by your party members or left by themselves, forts prevent the DOEs from making it to Aslarga and wreaking havoc, as well as adding a new wrinkle of micro-management to the dungeon-crawler formula.

While I was very keen to get into yet another RPG franchise through this combined effort between Atlus and Spike Chunsoft, it just isn’t for me. It’s by no means a bad game – if grinding and dungeon-crawling are your favourite parts of an RPG, you’ll probably find this game is a winner. As a story-driven gamer though, it didn’t quite click personally. Nevertheless it does offer a lot more depth beyond just walking in circles through randomly created maps – the town and fort management, as well as keeping your team fed while spelunking add layers to the overall formula that may keep those undecided on the game going. If you’re in it for the big overarching story though, you might be out of luck.

Etrian Mystery Dungeon was reviewed using a retail copy on Nintendo 3DS, as purchased by the reviewer.