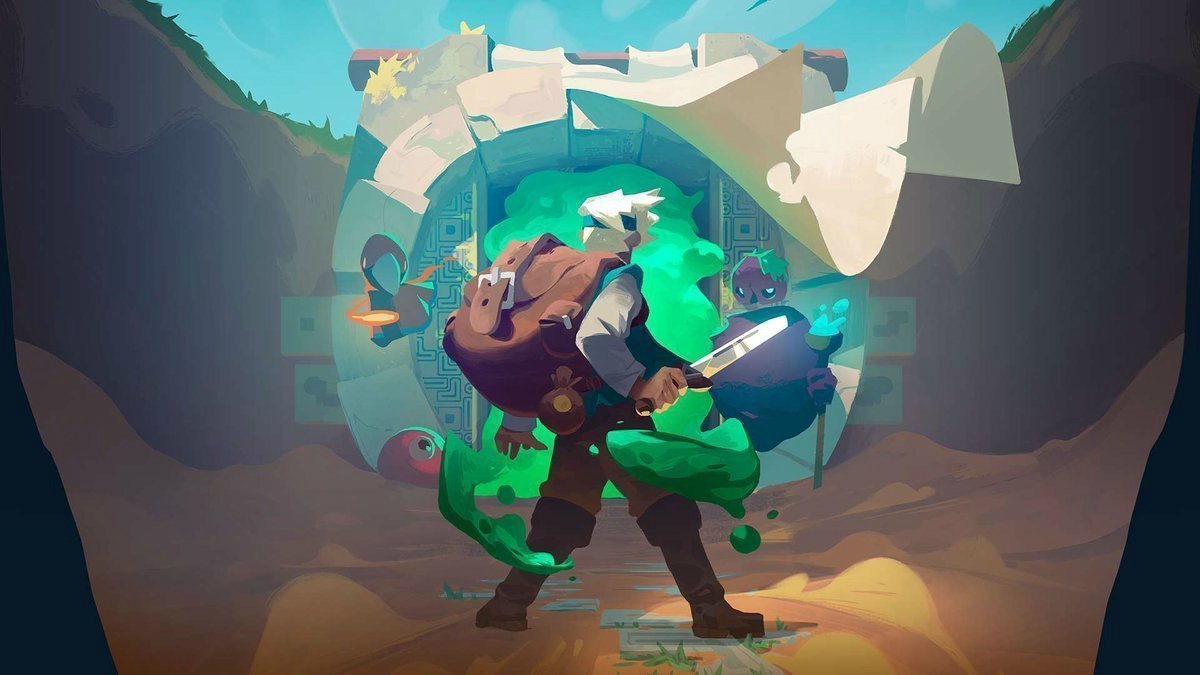 Grab that cash with both hands and make a stash.

It was E3 last year when I first saw Moonlighter, tucked away in a tiny little booth in the concourse hall away from the glitz and glamour of the show floor. Even in these humble surroundings, I was very impressed. It was one of my favourite games of the event and I’ve since spent the last year checking Digital Sun’s Twitter account, eagerly awaiting a release date. Now, everyone has the chance to check this fine work out.

The genius thing that makes Moonlighter so enticing is a well-executed, simple idea. You play as Will, a young man with an item store from a long line of shopkeepers. Will is happy to run his shop during the day but when the sun goes down he craves adventure so he moonlights as a dungeon crawling hero. Anything he finds exploring the depths of the mysterious local dungeons he sells in his shop the next day.

It’s this simple, repetitive gameplay loop that makes you just want to keep playing. I would frequently look up at the clock, shocked that hours had flown by when playing. Even today, and when I know I should turn the game off for the night, I’ll inevitably sigh and say, “just one more dungeon.”

The dungeons will immediately remind players of the older style top-down Zelda games. This is all about battles and exploration though rather than focus on puzzles. If you keep your eyes open and follow some in-game hints you’re likely to unravel a bit more of the story and find some expensive and well-guarded items to sell in your shop. Every time you enter one of these dungeons, the layout will have completely changed and you’ll have to map it out again — this makes the gameplay fresh each time.

Moonlighter isn’t all about dungeon crawling, as you’ll spend plenty of time selling parts of your fallen foes by the light of day. When selling an item for the first time you’ll have no idea what it’s worth. The only thing to go off is how frequently it dropped in the dungeon so you’ll just have to slap a price on it and see what the punters think. It’s then a matter of adjusting the prices based on the customer’s reactions.

The combination of collecting items and selling them the next day is the meat of the game but it’s all the little things that elevate Moonlighter to the next level. Making money will allow you to improve your shop and increases its size. You can add items to the interior to raise your prices or you could go for items that will keep the pesky thieves away.

The shop isn’t the only thing in need of improvement though as you can entice other valuable merchants to set up shop in town. This will add an all-important potion shop and a blacksmith to your town bringing the ability to create and enchant weapons and armour. As you progress through the game these folk will become increasingly important as Moonlighter is considered a “rogue light” so the various dungeons present enough of a challenge to keep the game interesting.

As if the dungeons weren’t tough enough, at the end of each one you’ll find a formidable boss attempting to impede your progress. If you want to get to the next dungeon and complete the game you’ll have to go through each of these bosses; I certainly wouldn’t advise doing so without gearing up appropriately. If you can manage to topple all the bosses you’ll be treated to a neat little story to go along with the fantastic gameplay.

While Moonlighter has officially been announced for the Nintendo Switch, a date has not yet been given. I would suggest that if you’re interested in Moonlighter — and you should be — and you are a little more patient than I am, hold out for the Switch version. This game is perfectly broken up into bite-size sections that will be perfect for a portable console. Delving into a dungeon only takes 5-15 minutes and selling your items only takes 2-4 minutes, so tasks could easily be divided up and completed during a commute.

Moonlighter is a wonderful combination of Zelda and Animal Crossing that easily commands your constant attention. It looks beautiful with a lovely, pixelated style; music from the shop and the dungeons will be stuck in your head for days. The only fault I could find with Moonlighter it’s relatively short — I wanted more dungeons, more enemies to topple, more items to sell.

Moonlighter is available from today, 29 May, on Windows PC, Mac, Linux, Xbox One and PS4. A Switch release is planned for later in the year.

Moonlighter was reviewed using a promotional code on PS4, as provided by the publisher. Click here to learn more about Stevivor’s scoring scale.