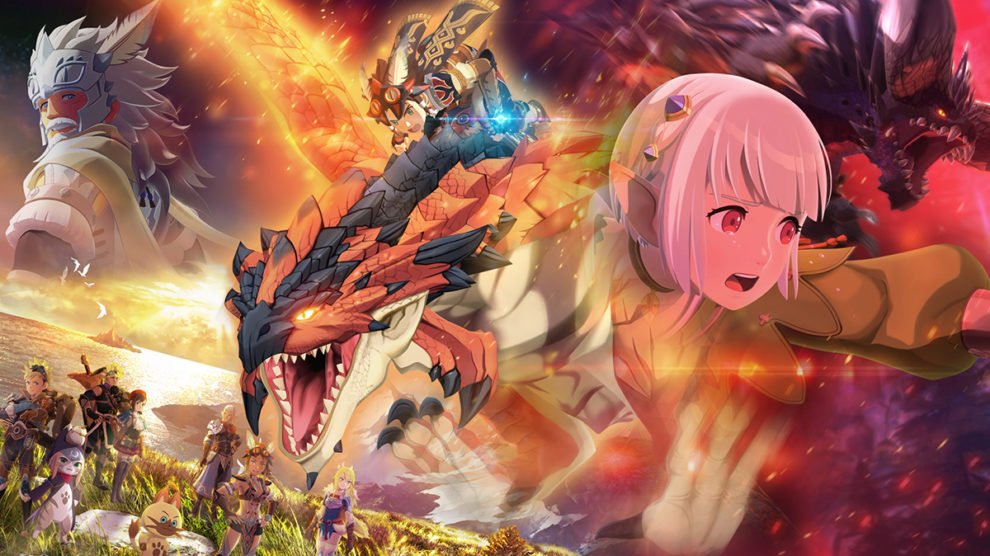 If you were to throw the world of Monster Hunter into a blender with a dash of Pokémon and a splash of Final Fantasy then the end result would be a tall, refreshing glass of Monster Hunter Stories 2 Wings of Ruin.

The second entry in the Monster Hunter Stories spinoff series, Wings of Ruin continues the hybridisation of classic Monster Hunter mechanics with the turn-based battle system most akin to Pokémon. While the comparison seems like low hanging fruit – both titles have you controlling monsters in turn-based battles after all – there truly isn’t a more apt one for the series.

The majority of gameplay involves running around large, open areas and battling monsters for their precious resources, or perhaps poaching their eggs directly from their nests as they sleep off the beating you gave them in your last battle (maybe we’re the real bad guys here?). Hatch one of these eggs and you’ve got yourself a brand new Monstie, the overly cutsie name given to a tamed one of these imposing beasts. With a little luck and some training this lil guy could soon be your new go to facewrecker, but that all depends on a combination of rarity and good genetics. 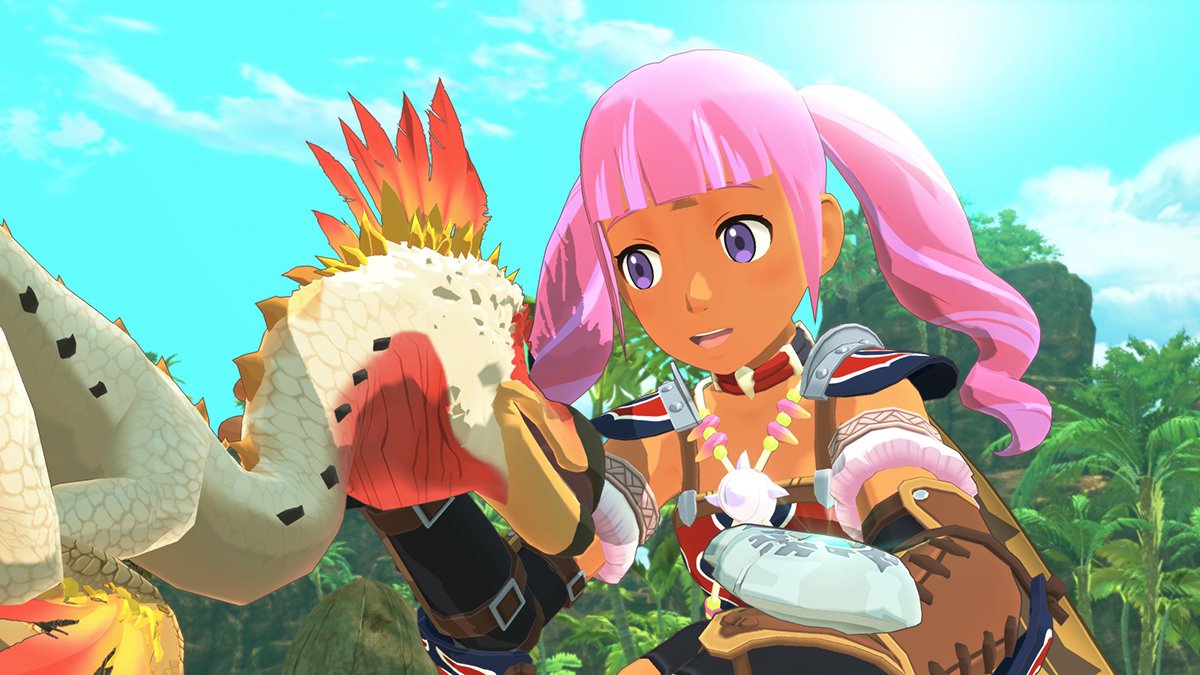 Each new Monstie is given a combination of genes dealt out in a 3×3 grid that do various things such as give it better resistances or moves to use in battle. Match 3 of the same element or type (Power, Technical or Speed) in a row Tic-Tac-Toe style and you’ll get a bingo bonus that increases the effectiveness of those skills. The more matches you have, the more boosts you gain, and you can even tweak those to your liking through the Rite of Channeling.

Throughout the story you gain access to a team of 6 monsters, 5 of which you’re free to choose yourself, allowing you to have a nice and balanced team of 6 or, instead, mix it up with 1 or 2 “herp” Monsties that wreck face with a couple of other utility options thrown in too. The battle system makes it necessary to take at least a few different Monstie types along with you, and exploration becomes much easier one you have access to monsters who can Jump or Climb (sounds familiar, right?).

Stop me if you’ve heard this one before…

The story itself picks up 50 years after the events of the first game, with monsters once more rampaging across the land. You’re playing as the grandkid of Red, the main character from the first game, and largely following in his footsteps as you try and work out what is causing these “rage rays” – beams of light that cause once docile monsters to become rampant. Along the way you’ll meet some familiar faces, and while I haven’t played the first game myself, I can see that there’ll be plenty of easter eggs around for those who did.

I won’t go too much into the story here as there’s plenty there for you to discover yourself, but just know that it’s serviceable at best – it provides reason enough to keep playing, and is occasionally quite gripping, but for the most part there are long lulls where the pacing drops right off. These normally occur throughout the middle of a chapter as you arrive in a new village and run around solving all their problems for them. 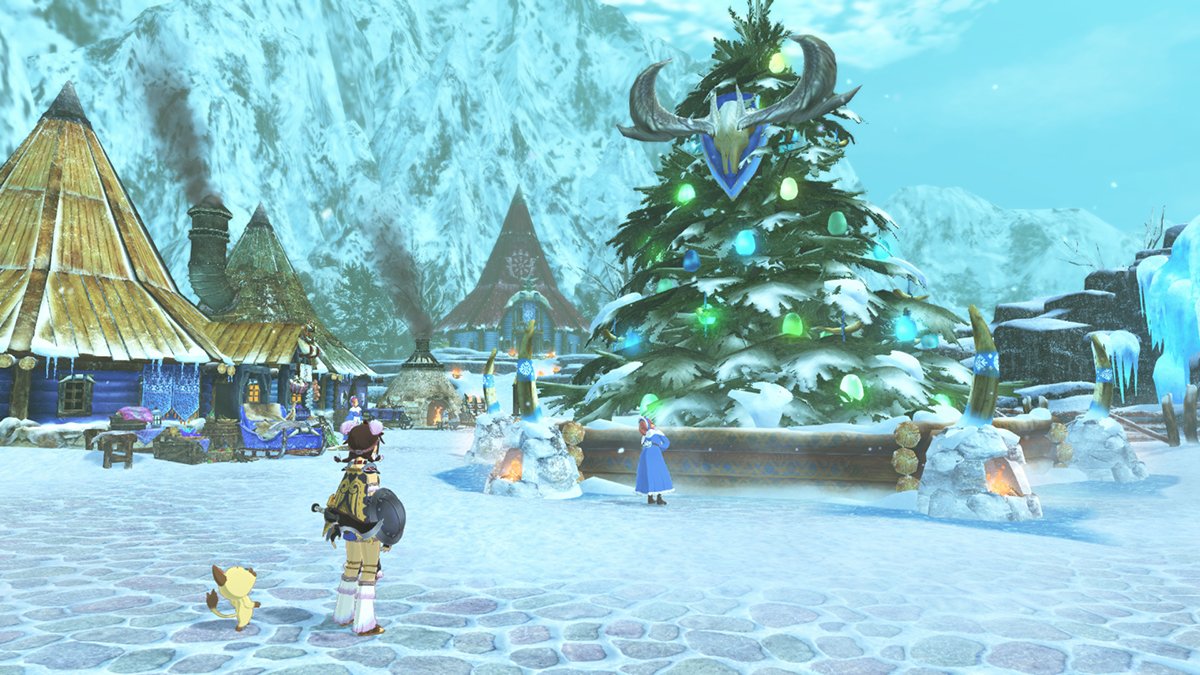 At it’s worst, gameplay in Monster Hunter Stories 2 can feel like one long fetch quest. Nowhere is this more apparent than during the games third chapter, where you’re tasked with repairing a town’s windmill. While this sounds like a gripping story beat all of its own, you’ll be even more thrilled to learn that every single step in this seemingly endless (editor’s note: it was three or four missions) chain amounts to nothing more than running to an area, slaying whatever new monster the game is trying to introduce.

To me, this is a real detriment to the title. While I understand that much of the game is just a Monster Hunter themed Pokémon battler, there’s little effort to even dress that up at times. This isn’t helped by the fact that the first time you fight a monster is normally the most frustrating or un-fun time, but we’ll get to that later.

Each chapter ends with a fight against a rampaging monster that serves as the boss battle for that zone. These battles normally introduce a new mechanic of some kind and will take much more out of your party then those you’ve fought so far. Beat them though, and you’ll find yourself with a nice little compliment of resources to kickstart your journey into the next zone.

If you’re not hanging out in town, picking up more quests from the quest board or forging new equipment, then you’ll be venturing out in the overworld. Out here monsters roam freely about, allowing you to pick and choose your battles. Do you want to run headfirst at that Rathian, or perhaps wait until you’re a little better geared? That choice is yours, with some Monsties even making it easier to navigate past harder foes.

If you’re not out to gather resources then you’re probably out to smackdown with some monsters, either for their parts or to nab one of their eggs for your Monstie collection. If you’re a high enough level then you can Quick Resolve a battle to speed the process up even more, though if it’s eggs you’re after then a sneaky paintball will cause the monster to flee rather than die once defeated. This opens a special egg den where you’re guaranteed a shot at the monster you just took down and is by far the best way to target farm for specific monster eggs. 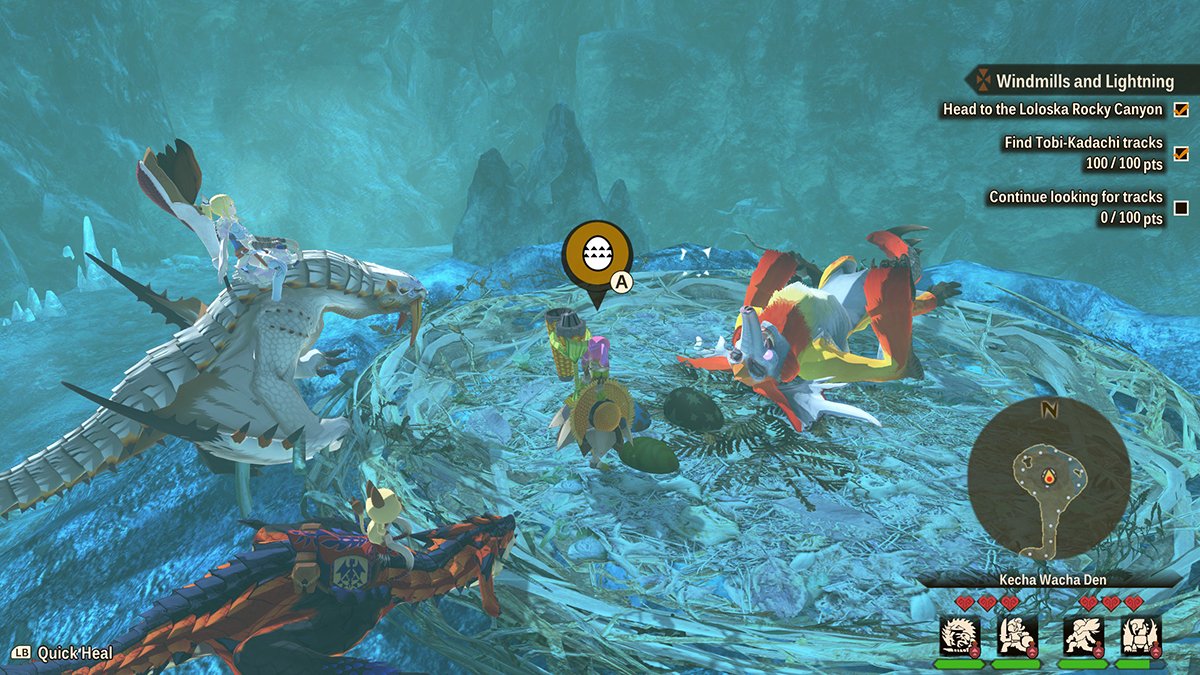 As well as these egg dens, the overworld is also populated with a few regular dens as well as Everdens. Regular dens are a random spawn each time you enter a zone and may occasionally have a gold colour to indicate that rare quality eggs reside inside. Everdens function more as permanent dungeons and can be effectively farmed for other resources required at certain vendors.

While undoubtedly providing a great way to power up your team through items and resources, I found myself largely ignoring these dens until I’d cleared the majority of the story content in a region. Having access to the Quick Resolve feature just makes farming so much easier to do efficiently and means you can breeze through dens that may take upwards of 20 or 30 minutes otherwise.

But what about the titular monsters? Well, fans of the series will be pleased to know that it is positively jam packed with fan favourites ranging from the relatively bland looking Velocidrome right through to the zany Kecha Wacha or downright gross Khezu. Some of my personal favourites, the Pukei Pukei and Nargacuga, are here too as well as some of the series previous flagship monsters in the form of Royal Monsters. You can choose to try and paintball these Royal Monsters if you wish for the chance to add them to your team, or you can take the more traditional Monster Hunter route and carve them up to craft powerful weapons and armour out of their parts.

Where Monster Hunter World may have been somewhat of a departure from the traditionally “out-there” weapon and armour design for the series, I’m pleased to report that it’s out in full force in Monster Hunter Stories 2. If you’ve ever wanted to beat a 40ft tall monster over the head with a guitar made out of its body or a gunlance shaped like a corn cob then you’re definitely in luck.

Wings of Ruin features six weapons from the Monster Hunter series, divided into three main types. The Sword and Shield and Great Sword make up the Slashing weapons, the Gunlance and Bow are Piercing and the Hunting Horn and Hammer round out the list at the Blunt options. Each of the damage types features one weapon that is slightly better at braking parts, while the other is better at pumping out raw damage. You can equip three of these weapons at any time and swap between them freely in combat, so it’s best to just grab one of each damage type to cover all your bases unless you’re hunting one monster specifically.

Hit ‘em with a spin move

Combat itself is very straightforward in Monster Hunter Stories 2, reduced to what is essentially a game of Rock Paper Scissors. There are three main attack types: Power, Technical and Speed, and each counter one type while being weak to the other. For this reason, it’s very important to pay attention to what attacks a monster is throwing at you so you can have a counter on hand should you find yourself in a Head-to-Head battle. 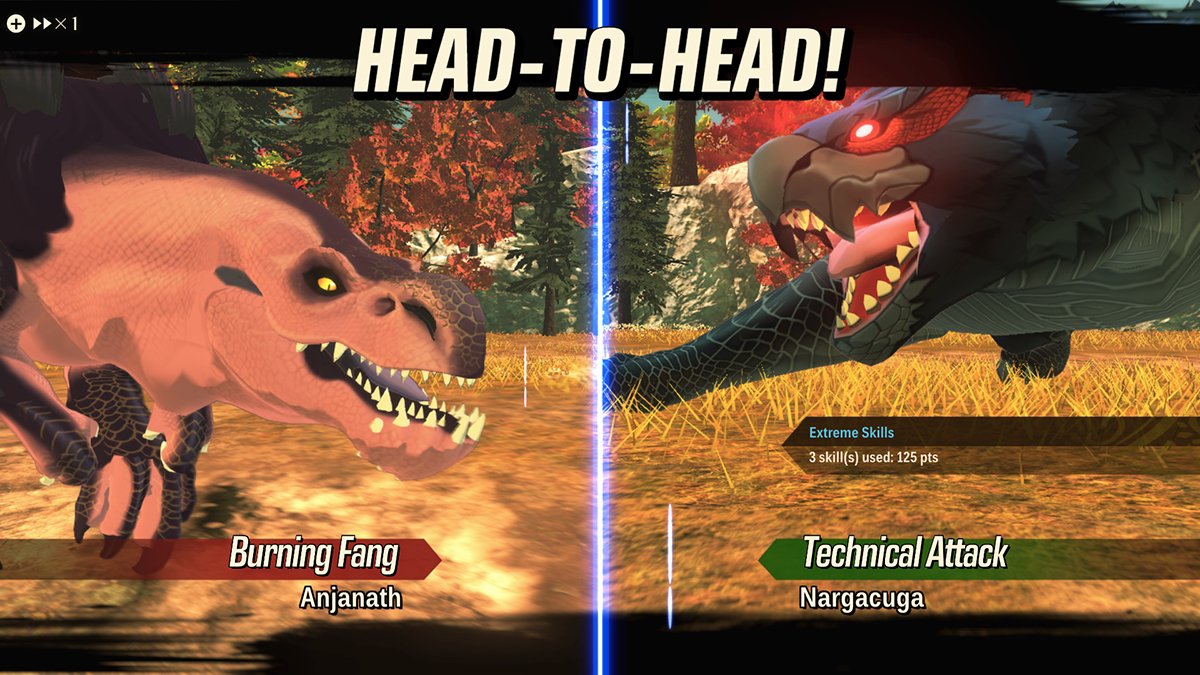 These Head-to-Head clashes arise when a monster targets either yourself or your Monstie and are very important to get right. Succeed in the clash and you’ll negate any skill used by the enemy monster and reduce the damage it’s attack deals, fail though and you’ll be the one on the receiving end of the harder hit.

If you’ve played your metaphorical cards correctly though, you’ll be able to combine both your countering attack with that of your Monstie, which initiates a special Double Head-to-Head attack. These are even better than the regular clash as they fully cancel the attack of the enemy monster, leaving you to deal big damage and it to just stand there and take it.

Nailing the flow of combat and making sure that you have the right Monstie and the right weapon on hand makes for a very rewarding experience, as you absolutely body the enemy monster in combat. This does have the unfortunate effect of their being a “correct” way of fighting everything though, and on top of that makes the first fight against a new species an incredibly frustrating affair as you learn the attacks it uses and how it changes once it enrages.

While not without its flaws, Monster Hunter Stories 2 Wings of Ruin absolutely improves on the original in every way. The Rite of Channelling is something you gain access to very early on now and leaves you with a lot of room to experiment with the system. There’s a huge variety of monsters available, and all the zany Monster Hunter styling is on full display.

Fans of the Monster Hunter series – even the main games – will have a real hit on their hands here, with a pleasant change of pace from the usual Monster Hunter antics. That doesn’t mean that there’s not plenty here for the layman too, and if you’re looking for a fun, if a bit easy, title to run you through to that huge release window in October than this is definitely worthy of your consideration.

Monster Hunter Stories 2 Wings of Ruin was reviewed using a promotional code on PC, as provided by the publisher. Click here to learn more about Stevivor’s scoring scale.