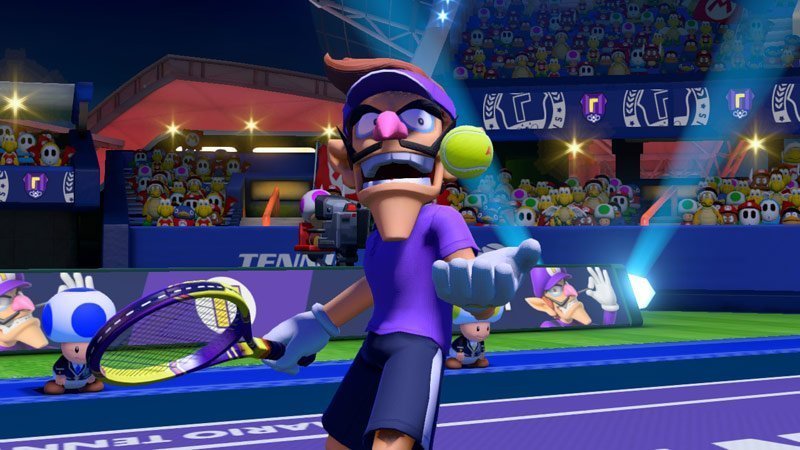 It’s great to see Mario back on the court in some solid form, and channeling an uncanny Lleyton Hewitt “c’mon”. I’ve come to accept Mario Tennis of the Nintendo 64 and GameCube eras were a product of their times, but the dismal Mario Tennis Ultra Trash — sorry, Ultra Smash — that appeared on the Wii U’s deathbed gave rise to fears Mario’s most successful sporting caper may have been overplayed. Less than 3 years later, Camelot has atoned for its missteps and delivered the best Mario Tennis game in generations, but it’s still forgotten how scoring works.

Mario Tennis Aces opens with a renewed focus on strong single-player, something distinctly lacking in the Wii U and 3DS offerings and largely unsighted since the GBA instalment. The new Adventure mode has a strikingly Nintendo narrative, pedalling some nonsense about Luigi being kidnapped by an evil purple racquet — whatever. Overlooking the fluff, it’s basically a series of obstacle-laden tennis matches and mini-games, as Mario and Toad roam a spooky forest and some familiar lands, solving their disagreements and overcoming adversity through tennis. 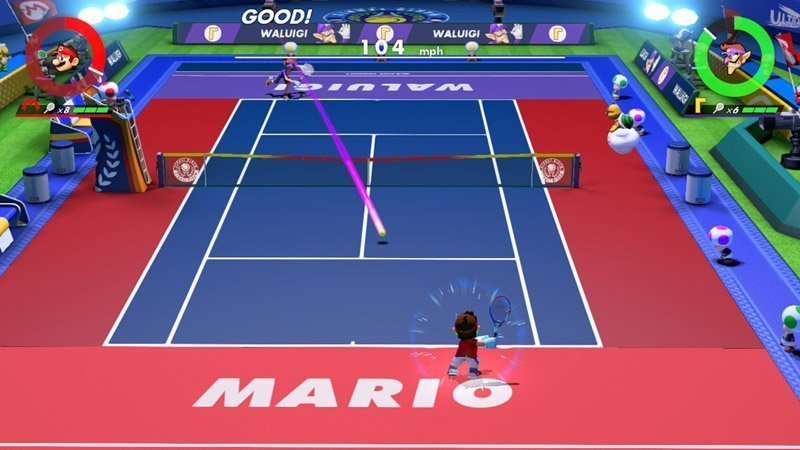 It’s fanciful, but walks you through the new additions to gameplay nicely and ensures the novelty mini-games have a purpose to serve. The primary goal is to “rescue” Luigi, but you’re actually learning about the new moves and unlocking courts for Free Play.

The point of difference is three tiers of special shots. When a star appears around a returned ball, you can choose to charge up and play it back from within said star to execute a powerful star shot. If you have partly filled your energy gauge, by performing these and trick shots, you can activate a zone shot, which is essentially a more frequent version of the special shot we’ve seen in previous games — a timer appears and allows you to aim a smash. If you fill the gauge completely, you can play an even more powerful special shot, with a lengthy animation, that will push the opponent back and probably break their racquet; unless they fluke the return timing or waste their own precious energy to slow down time and block an easy return.

Breaking racquets is the only mish*t, as it’s too powerful and can result in a “knockout”, an instant victory, which doesn’t make any sense. With knockouts enabled, racquets are essentially lives and once you run out, it’s game over. Except special shots already push the defensive player back, well outside of the court. Even if they manage to return the ball, which is unlikely, they’re well on the back foot for the next shot. The threat of breaking a racquet only exacerbates the risk, so you’re actually better off giving up on trying to return special shots, knowing you’ll lose the point anyway, but protecting your racquet; that cannot have been the intention. 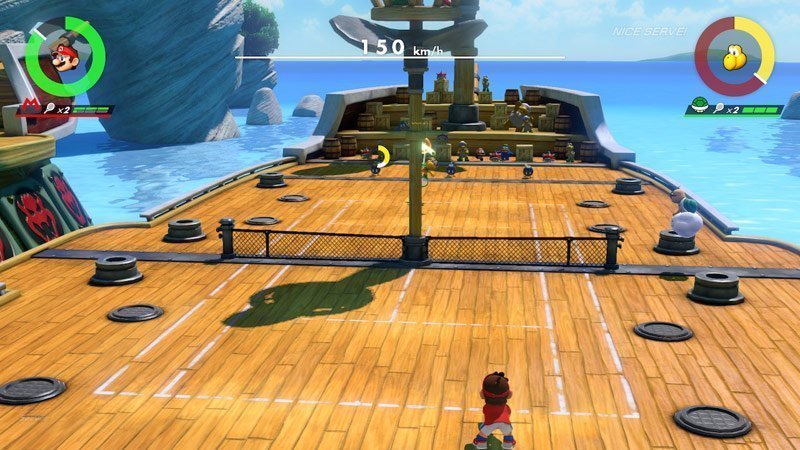 There’s just enough here to ensure the AI will pose a threat in your first few matches. Increase the difficulty, and they may even whomp you a couple of times, but it’s not long before you master how and when to use your precious energy and start pining for the challenge only a human player can provide.

At its best, Mario Tennis Aces is much more tactical than previous games. The three tiers of power shots, and a defensive option that comes at the expense of attacking currency, forces you to think at least a point ahead: do I use energy to protect this point where my opponent has the ascendency, or do I let it go and use the banked energy to ensure I win the next one? But there’s only so long that lasts against AI before they become too predictable on lower difficulties, while on the harder difficulty they’re too prepared for any eventuality. The brilliance of tennis, which is especially true for Mario Tennis, is setting up your opponent and delivering either the unexpected, or a clear winner they are expecting, but can’t do anything about. That’s when you need a human opponent.

On-court against a human player, Mario Tennis Aces is a bucket of fun as a local multiplayer game. You can play splitscreen using one Switch, or over local wireless play using two consoles and two copies of the game. It strikes the perfect balance between wacky mushroom kingdom shenanigans and the solid base tennis game underneath that powers it. Turn off the zone shots and star power for a simple match, and Mario Tennis is a great one-on-one multiplayer game against a worthy opponent. It can also be played online, but we were unable to test that prior to launch. 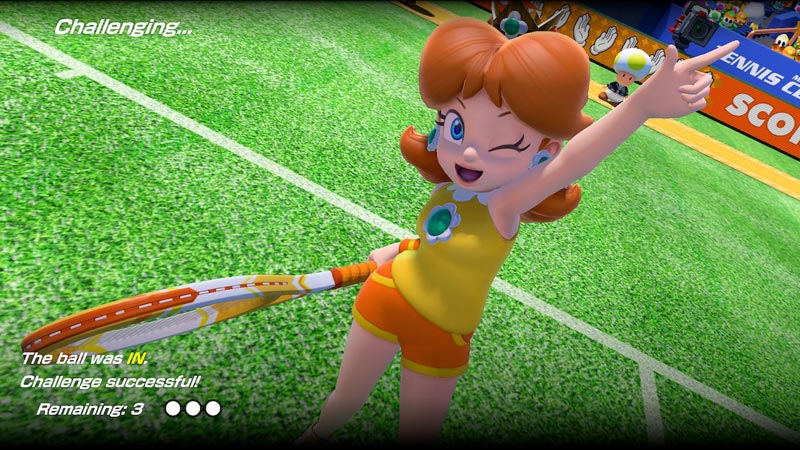 The underlying tennis game is still fantastic, as it has been since its inception. It’s fairly simple, replying on the four face buttons to command four shots (topspin, backspin, flat power and lob). These have been tweaked over the years, but I still love the simplicity and the control. There’s no sense of realism (except that you can challenge umpire decisions and go to hawkeye, which seems as legit as it is in the Australian Open) — even with trick shots disabled you can almost reach any part of the court — but you always feel in control, with a tactical nuance to using the different types of shot in the right situations.

Unfortunately, Mario Tennis Aces suffers from the same inept oversight as its predecessor: it doesn’t offer a proper game of tennis. The Free Play mode, the reason to play Mario Tennis, is restricted to tiebreaks or a single set comprising just two games (first to two games, with a tiebreak at 2-2), which is misleadingly named extended play. Bewilderingly, it’s been decided we would never want to play a six game set, let alone multiple sets against friends, and that’s utter madness. It doesn’t make any sense. Some of the Adventure mode matches are multiple sets (but still only two games), as are some matches in the single-player Tournament mode, which consists of three cups that take about 15 minutes to obtain, but these options are not available in Free Play. The game is clearly setup for longer matches, so we can only hope the option is added via a patch.

The reduced games do make sense in the new Swing mode, which combines the best of casual Mario Tennis with Wii Sports Tennis. It forgoes the lavish special shots to focus on hitting the ball with precise motion controls using a single Joy-Con like a Wii Remote. The range of movements are considerably more in-depth than Wii Sports, but its ease of use is similar and reacts remarkably like an actual game of tennis, once you adapt to the timing. Backhands and forehands are straight forward, but I was impressed by the implementation of topspin, backspin and flat shots by the angle of your wrist. Like Wii Sports, characters run to position themselves, but with a joystick in hand, you can also take manual control to manoeuvre them around the court. If that seems too complicated for mum and grandpa, there’s a Big Ball mode that signifcantly slows the pace of a gigantic ball, making it much harder to hit it outside the court, and doesn’t worry about shot type — so it basically becomes Wii Sports. 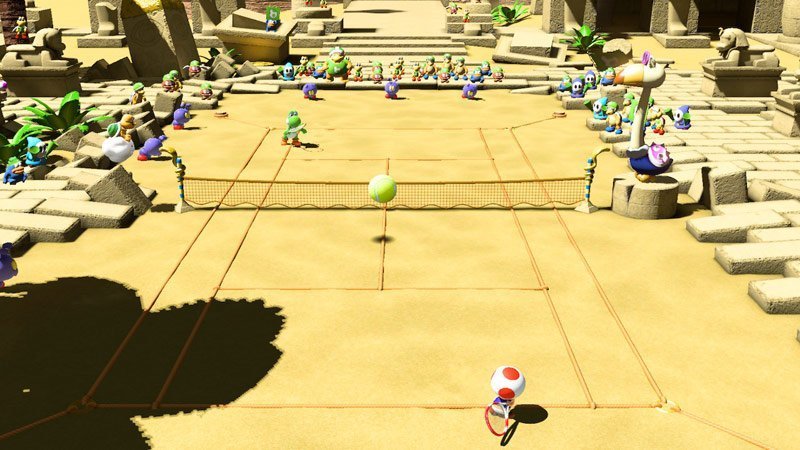 The great thing about the distinct separation of Free Play and Swing mode is I genuinely have two audiences to bust out Mario Tennis Aces with. Once the Adventure mode is done, it’s not going to get regular play time, but the motion controls are good enough, and more importantly similar enough, to have some fun with my non-gaming family members who loved Wii Sports in 2007 but didn’t give the Wii a second glance. Then it’ll go back on the shelf for six months, until my friends of a certain Nintendo vintage decide they want some classic Mario Tennis, and that’s what they get in Free Play, albeit restricted to super short bursts that they will complain about. It’s the best of Mario Tennis and Wii Sports motion tennis rolled into one game, but in distinct and very seperate modes, it just lacks one thing: being able to play a proper set of tennis.

Mario Tennis Aces was reviewed using a promotional code on Switch, as provided by Nintendo. Online functionality could not be tested prior to launch. Click here to learn more about Stevivor’s scoring scale.