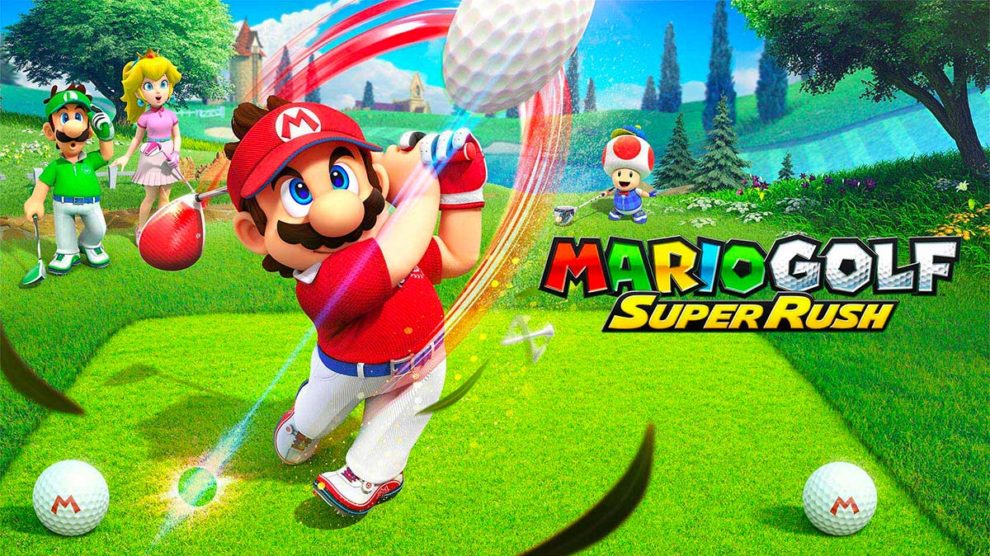 Mario returns to the golf course after a long layoff, and he's quickly out of breath.

Mario and friends have made a miraculous comeback to the golf course after a surprisingly prolonged absence. While developer Camelot has prioritised Mario’s tennis career, Mario Golf Super Rush marks the end of a seven-year hiatus since Mario Golf World Tour (2014, 3DS), and an astonishing 18-year wait since the last console instalment, with Toadstool Tour on GameCube. Somehow, Mario and golf didn’t team up during the Wii waggle-fest.

Like its predecessors, Mario Golf Super Rush strips the sport back to its basic elements, plonks it in the Mushroom Kingdom, and delivers an accessible, easy to pick-up game of golf, with reliable mechanics that are as strong as ever. We’re here for a good time, but not necessarily a long time, as the additional modes fall short of the established golf-but-with-Mario formula that hasn’t strayed far over the years. It’s a formula that still works very well, but isn’t as captivating as it once was, and actually feels a lot like the GameCube game, with the same number of playable characters at 16 and only six courses in total.

As a pick-up-and-play multiplayer game, Mario Golf’s pure Standard Golf mode still delivers. Anyone, regardless of their enthusiasm for real-life golf or even gaming prowess, can pick-up a club and achieve par — or better — on the first two courses. It’s as simple as hitting A (or right Joy-Con button) to swing, and hitting it again to set the power, twice for topspin or using B instead for backspin. The game will point you in the right direction and select the most appropriate club. It’s hard to go wrong, and feels very satisfying, even though there’s a sense that the training wheels are still on.

The later courses reduce the direct line to the green, by introducing more obstacles and hazards, so here more experienced players will need to plan their shots factoring in the roll of the ball, adjust the power and add sidespin mid-swing. While the A.I. doesn’t put up much of a challenge in single-player, it’s the courses that add the challenge to multiplayer, and are best matched to the audience’s skill level. Playing solo, the A.I. is astonishingly terrible at times, and could use some fine tuning, as well as the addition of difficulty options.

Alongside the reliable button controls, Super Rush dangles some rather ill-fitting motion controls whenever you commence a new round in most modes. They’re a bit of a laugh and succeed in getting you up off the couch to line-up the ball and swing. But the motion option comes at the expense of precision and accessibly, so they don’t fit what the rest of the game is trying to achieve and feel oddly out of place. It’s a rare case of the motion option being far less initiative and much, much, much harder to pick-up. Maybe I’m starting to see why Mario Golf never made it to Wii after all. 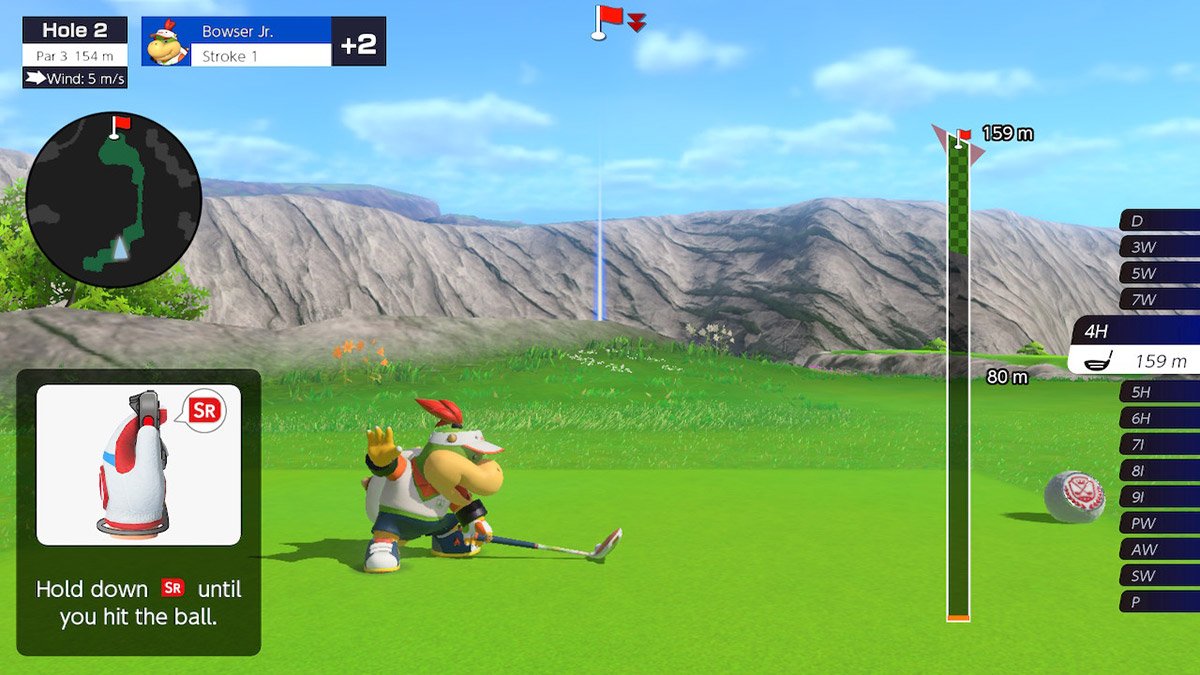 The Standard Golf mode is clearly the front runner, either in multiplayer or solo — where you can play alone or with A.I. opponents. Despite the layoff, it follows the script so closely that it’s hard to get too excited about it – but it’s still the reason to play Mario Golf. All other modes are essentially training grounds to learn the courses and improve your game to play the standard mode. There are some good ideas, but none of them are fleshed out enough to command longstanding attention.

Speed Golf mode has good intentions, but it’s something of a conundrum, as it’s actually a very slow way to play Mario Golf. It has you and up to three other players, A.I. or real people, playing on the same hole at all once. After taking a shot, you have to run after your ball to take the subsequent shot, with the aim of reaching the hole in both the shortest amount of time and in the least shots.

The thing is, running after your ball, playing as rather unfit characters who can barely jog for a few metres before stumbling to a crawl, is much slower than simply teleporting to your ball at the conclusion of each shot, as you do in Standard Golf mode. In four-player couch co-op, it ensures that everyone is always playing, so it works quite well. But with incompetent A.I. players in the mix, you spend most of your time meandering after the ball and waiting for them to constantly make bad shots, which you have to watch. So this should be called Rush mode, and it is fun with four real players, but speed golf, it is not. 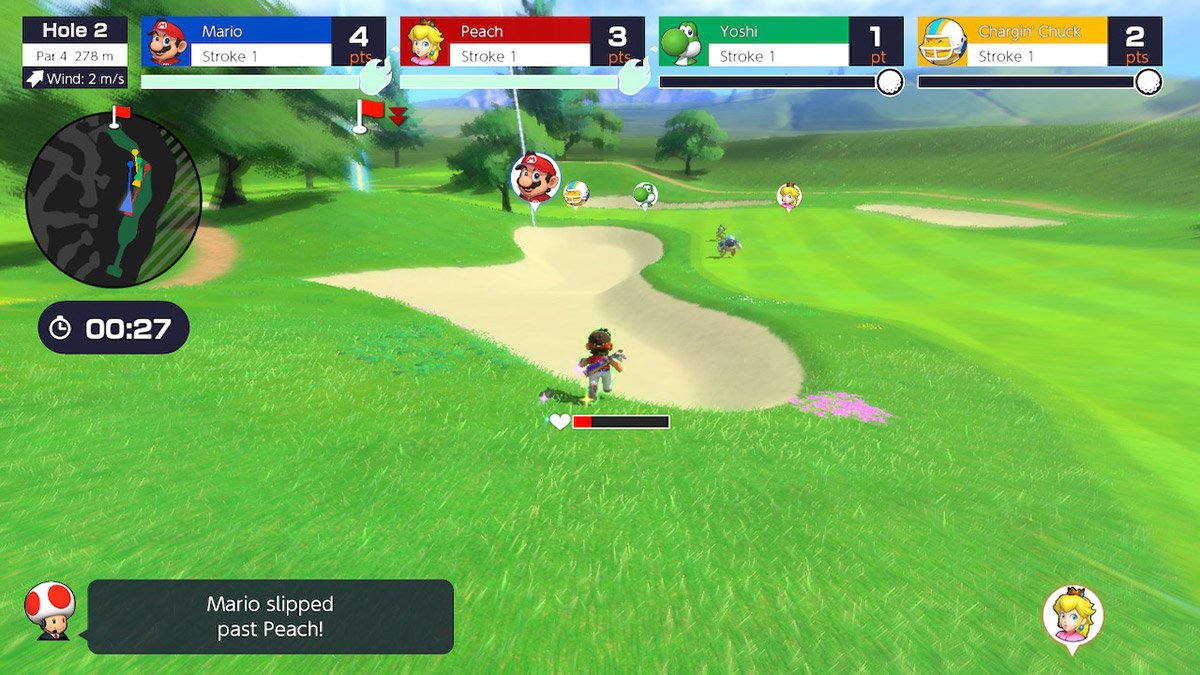 A better rendition of the same idea is Battle Mode. Again, you and up to three other players tee off together, but this time are competing for the same hole. Whereas Speed Golf has you playing on top of each other with an ‘everybody is a winner’ vibe, Battle Mode only allows one player to win each hole, upon which it disappears, and you all madly rush to the next one, trying to avoid a barrage of power-ups determined to disrupt the whole thing. The distance between flags is more like mini golf, so running between them isn’t such a big deal. Battle Mode feels much quicker, with far more urgency, than Quick Golf. It’s just a shame there are only two maps, as after a few rounds, there isn’t much driving you to return; and again, it only really works with four real players.

The single-player Golf Adventure mode revives your Mii from its slumber, and has you run around a small village that feels like the opening town in a Pokémon game; Birdo even implores you to call her ‘mama’ and wishes you well from the kitchen. There’s a basic story, but the crux of it is you need to level up your stats and collect new golfing badges (wait, maybe this is still Pokémon) as you progress through trainings and tournaments. Those tournaments are very similar to playing Quick Golf, with most games requiring you to run after the ball.

After that, it diverts from essentially being Quick Golf starring a Mii, with some repetitive boss battles, and challenges to complete holes within a certain shot limit. After being a golf training game for about four hours, the final hour suddenly takes an unexpected twist that transcends becoming a golf master. It’s a strange redirection, but is clearly intended for kids who are likely the target market for finishing this middling story. 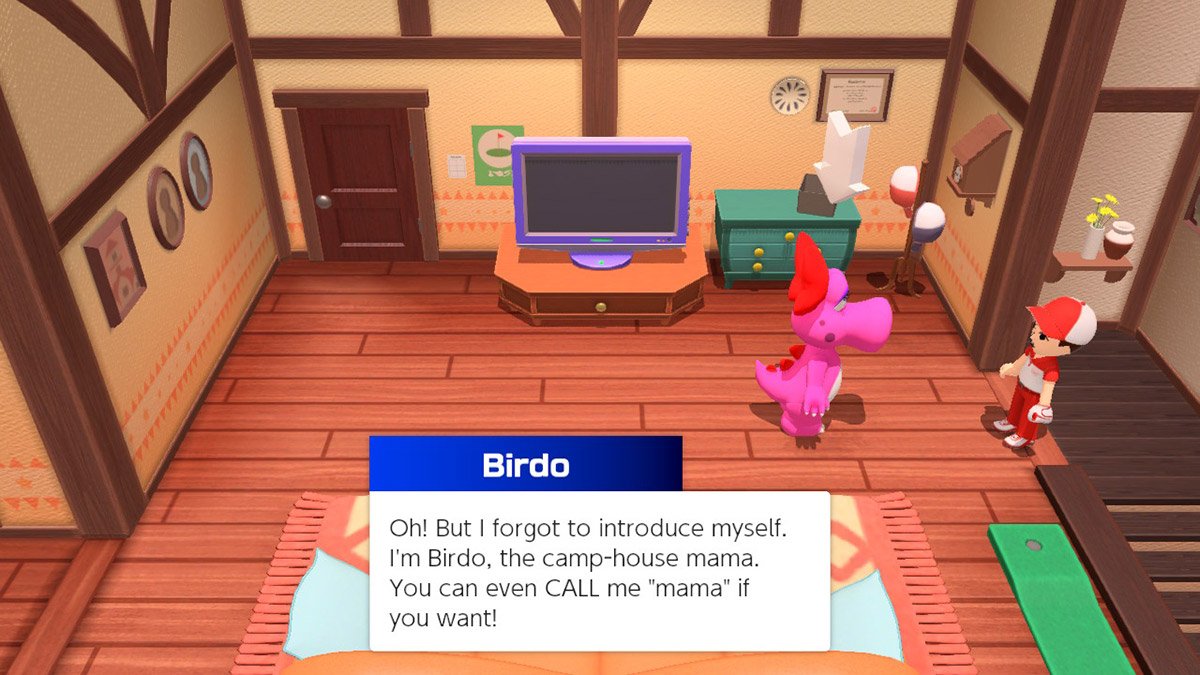 Playing the entirely of Golf Adventure will result in your Mii becoming a superstar golfer, far superior to any of Nintendo’s roster, and I’d wager that longterm this is going to present a problem with online play. My Mii character can hit the ball further, has more stamina, better control and far greater skills than any of Mario’s buddies, so he’s been banned from local multiplayer.

There is a Solo Challenge mode — totally devoid of any solo challenges — that has you play Standard Golf, ranked on points or by time. The only difference is it allows you to up-skill Nintendo’s roster, ultimately to match your Mii. It seems like a last-minute course correction to try and address the imbalance caused by completing Golf Adventure; but without any actual challenges, there’s not much incentive to do that.

Most games set in the Mushroom Kingdom are styled simplistically, yet are vibrant and look great regardless of any hardware limitations. Super Rush doesn’t meet these lofty expectations, with an aesthetic that is bland and plain compared to what we expect, as if it’s missing that final layer of Nintendo polish. The characters themselves come across flat, as if they’re making the best of the situation, but are only here to fulfil an unwanted contractual obligation. 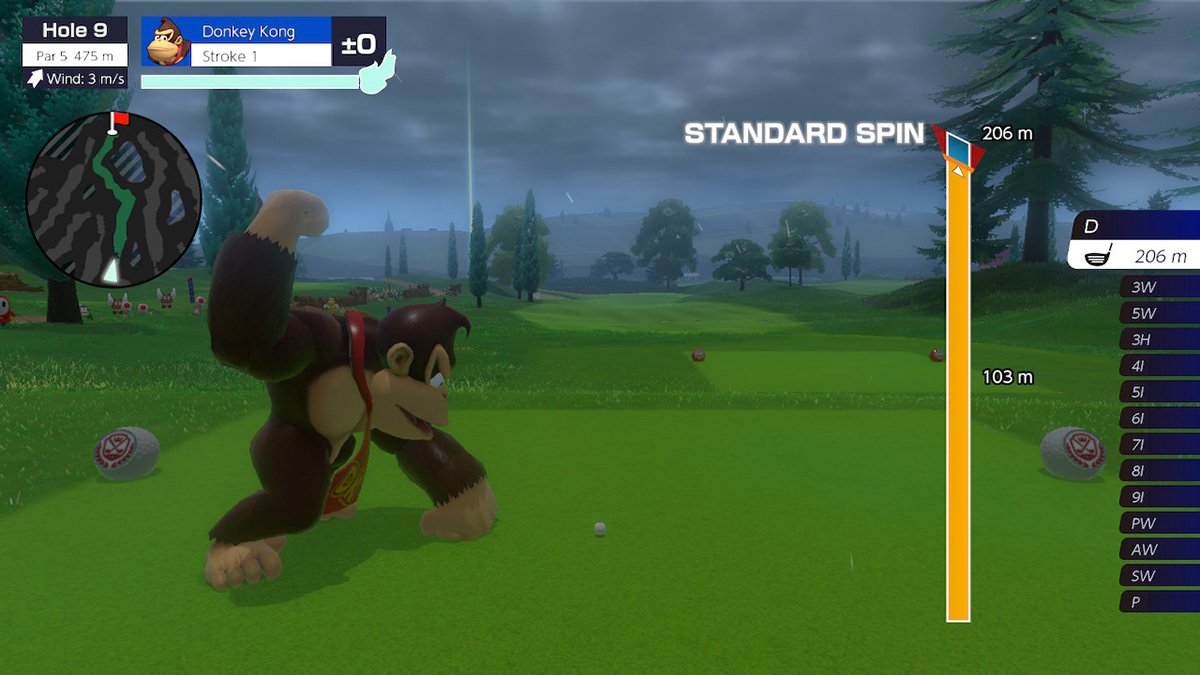 The six courses on offer are varied, ranging from two normal golf courses to learn the ropes, to dusty deserts, rocky mountains, wild weather woods, and a hearty dose of Bowser. The unlockable courses are clearly designed with Speed Golf in mind, and once you accept that it’s not speedy, but does allow you to learn the courses, it’s the best way to figure out how to play them. In Standard mode, you’ll run into mountains and be somewhat bewildered by the layouts when studying a map to the green, but running across them helps you better understand these unconventional designs.

The more elaborate courses are well designed, and while I don’t think I’ll get over Quick Golf being so slow, I did appreciate it as a learning tool to better understand the unlockable courses. While they are all well designed, they do play it safe, and I would have liked to see more included at launch. Hopefully Nintendo introduces some as free updates relatively soon, as it feels a little short for a full priced game — World Tour launched with 10 courses. Two are unlocked from the start, while the other four are unlocked by either playing through the Golf Adventure, or by completing the subsequent course (which is much faster). 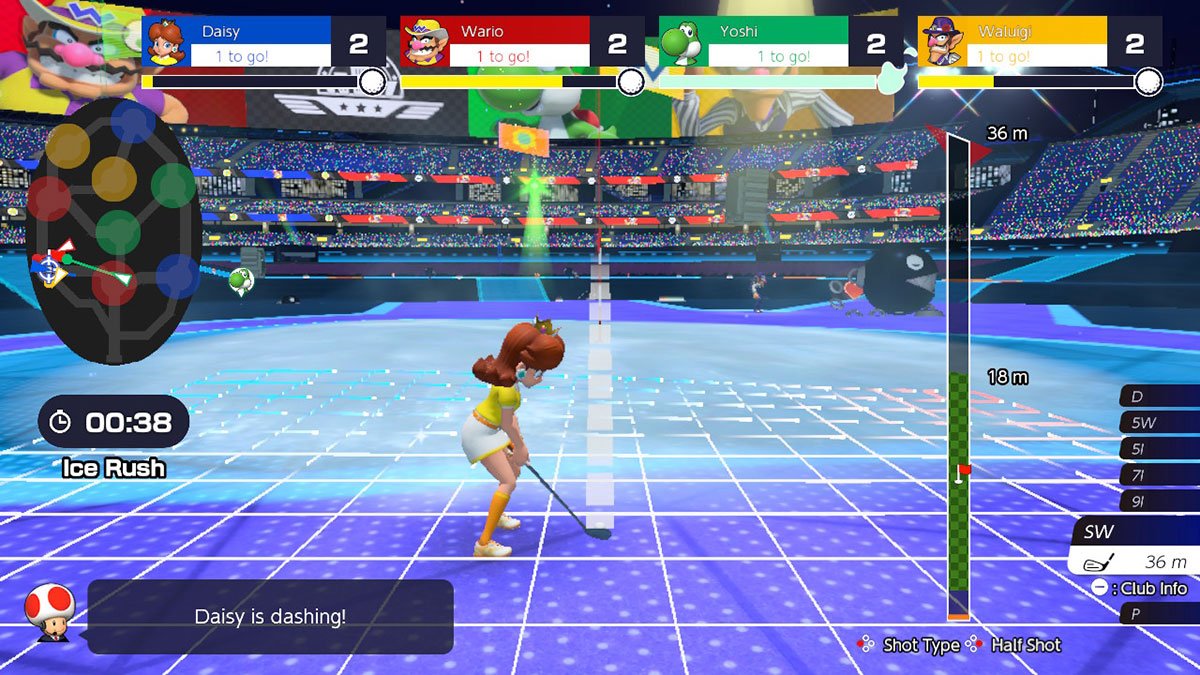 Mario Golf Super Rush delivers a delightful and simplistic rendition of golf with great basic mechanics, but there isn’t much of it. While it revives the pick-up-and-play mantra of previous instalments, it ends up feeling like something plucked from a previous generation. There’s plenty of fun to be had with the Standard Golf mode, which is still extremely accessible and satisfying to play, but it’s all over fairly quickly and hasn’t evolved a great deal since the GameCube and 3DS instalments it’s following — it actually has a fair bit less content than World Tour. The new courses are well designed but are all familiar themes, and while Quick Golf is actually quite slow, it’s a good way to explore and learn how to play them.

Mario Golf Super Rush remains easy to pick up and play, but it’s lacking the final coat of polish we expect from Nintendo games, and is light on content for a full priced Switch game. It’s a Mario sport game that can be picked up and played by a wide audience, but has positioned itself to only really appeal to dedicated fans of Mario Golf.