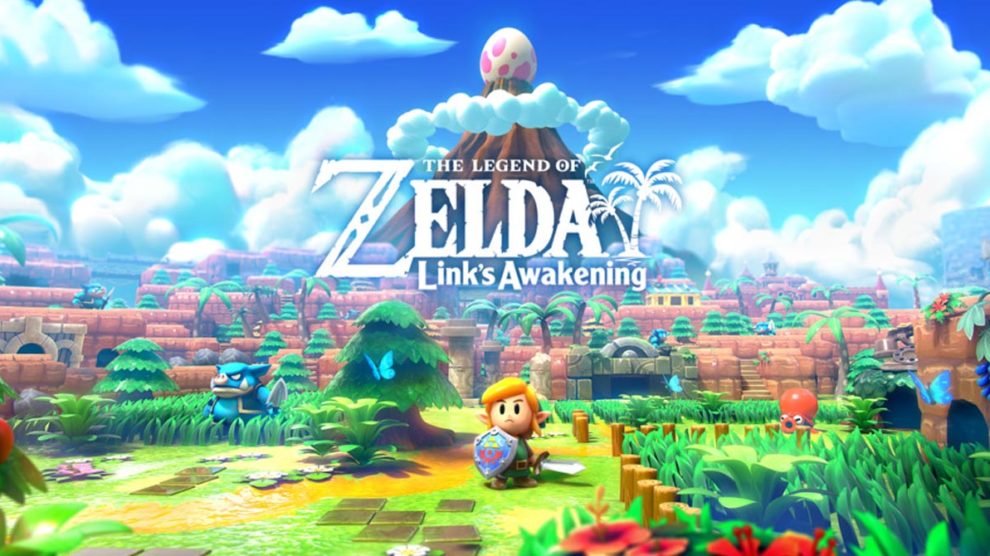 Playing The Legend of Zelda: Link’s Awakening in 2019, especially in the wake of Breath of the Wild, is like unexpectedly awaking in your childhood bedroom. Everything feels reassuringly familiar, yet strange and confusing at once.

It carries the now iconic Zelda substance, and still bears traces of its ambitious, at the time, goal to replicate the scope of A Link to the Past on the technologically limited, even by 1993 standards, Game Boy. Yet, despite all its comfortable charms, Link’s Awakening is a peculiar game. It’s why I was a little surprised, and am now extremely grateful, it was remade. There’s no way Nintendo would make a game like this now, and I doubt it could be done; it’s a passion project designed by a small team able to take some creative liberties when there was a clear divide in status between console and handheld instalments. 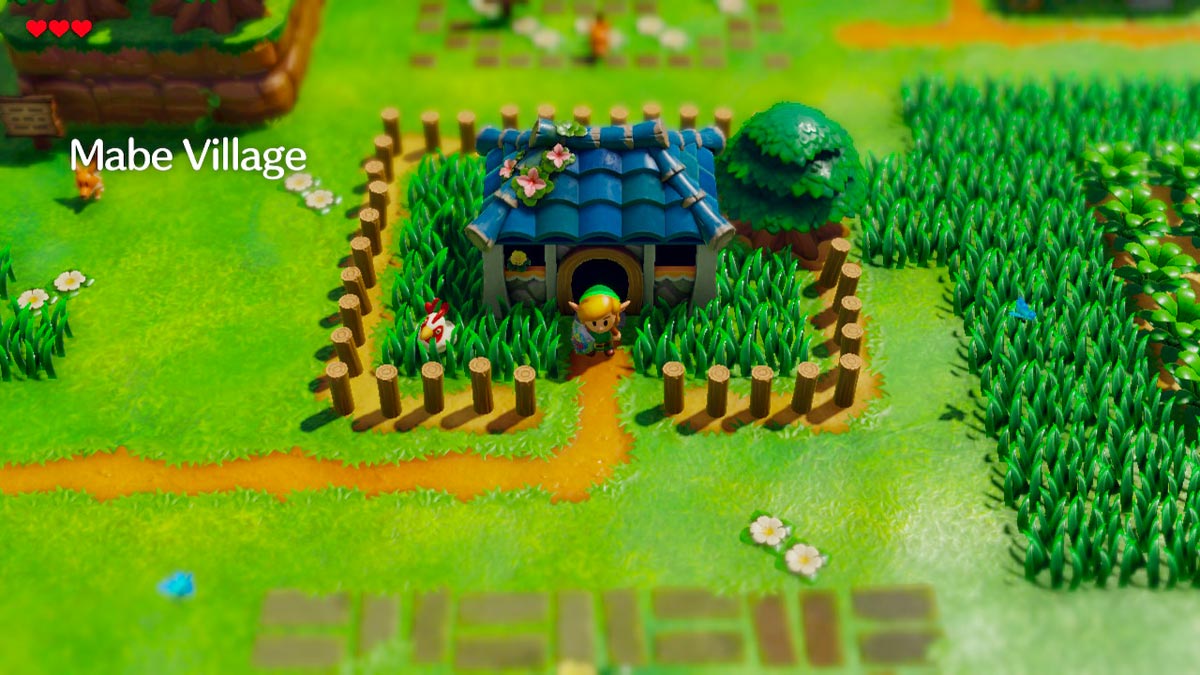 Link’s Awakening is an adorable game. Link’s red face when he overexerts himself and bemused eyes take a much lighter approach contrasted against the Switch’s flagship, Breath of the Wild. The remake ventures away from Hyrule on a rickety boat across rough seas, and returns to Koholint Island 26 years after Link, without Princess Zelda in tow, debuted on Game Boy, and 21 years after its colour restoration. There is an entire generation of Zelda fans who have never played one of the strangest, yet most revered, instalments in Nintendo’s iconic franchise; and to be honest, I’m one of them.

Nintendo has fully embraced a toys-to-life aesthetic, which marries perfectly with the tone. It’s brimming with colour and important details through what is actually a very simplistic style that looks as if it’s trying to sell a full set of amiibo. The tree tops glisten with a plastic sheen straight out of your childhood toy box, and while he’s not as exaggerated as the cel-shaded Toon Link, he’s just as animated in his expression.

With a cross over of Nintendo franchises and cameos aplenty from the likes of Dr Wright, a Chain Chomp named Bow Wow, Shy Guys, Yoshi and even Princess Peach, Link’s Awakening feels like it has been plucked from a child’s imagination, playing with his collection of Nintendo toys and blending them together in his own story; now it looks the part. 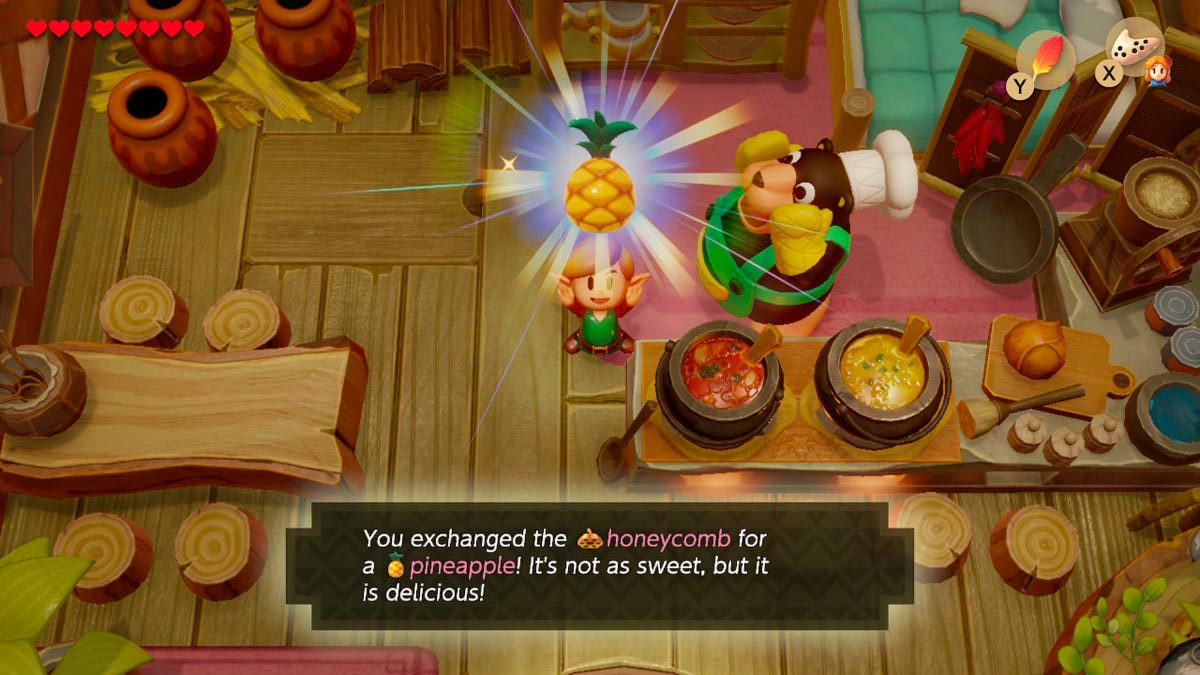 The simplicity extends to gameplay, anchored by a tilt shift camera that primarily recaptures the top-down vantage point; rather than being locked to a bird’s eye, it’s like you’re peering into Link’s toy world story. Movement is somewhat modernised, but still retains a sense that this world was meant to be explored in four directions with a D-pad. It would have been the ideal time to release a left JoyCon with a proper D-pad, as the eight direction movement doesn’t feel quite right with a 360 degree control stick — unfortunately it can’t even be used on the Pro Controller or Switch Lite.

This is a pure remake. Whereas most take some liberties with the source material and update mechanics to bring them in-line with modern expectations, the gameplay is almost identical to the original Game Boy release, with updated enemy AI. The puzzles, locations and combat are accurately re-created, but Nintendo has addressed the biggest flaw necessitated by the Game Boy’s design and taken advantage of the Switch’s extra buttons, which makes it far more user friendly.

With more than a pair of face buttons to work with, Link’s sword is always at the ready, and his manually operated shield is mapped to RZ. There’s no Z-targeting here, as we expect with a faithful remake; however, it’s the only mechanic that my 2019 brain struggles to comprehend. It’s hard to block an attack approaching diagonally — it can be done, but Link fights you and wants to default to up, down, left or right and not one of the four points in between. 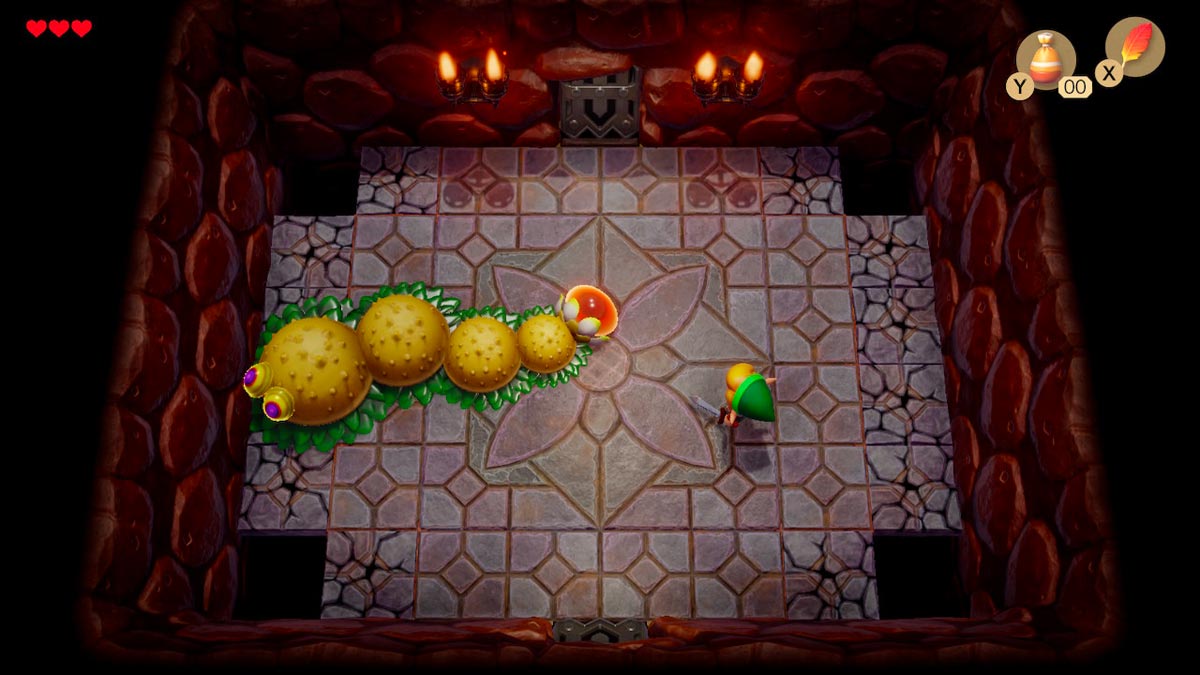 With his sword and shield always equipped, Link now has two interchangeable inventory slots. It still plays true to the original design, he needs to swap between items more often than other Zelda games, but now at a manageable rate. While the feather, which allows Link the rare ability to jump on demand, claims dibs on one of these slots for a majority of the fantastical adventure, the modern inventory system allows easy switching between key items.

Less time spent bouncing in and out of menus means more exploring a surprisingly large world when we reflect upon its origins. Despite its quirky nature, Link’s Awakening still follows what has since become a familiar formula. With the acquisition of a new item or ability, Link works through a new area and ultimately stumbles across its dungeon, where there are plenty of exceptional puzzles to solve and a fairly easy mini boss, followed by a trickier main foe.

While the combat is serviceable though dated, I’m amazing at how well the puzzles have held up. With most screens resetting when Link moves into the next grid, they are a product of their era that excelled within their limitations. It’s a polished collection of puzzles that will test you in bite-sized bursts, requiring just enough dedication to deliver a genuine sense of accomplishment, without ever starting to bog you down. 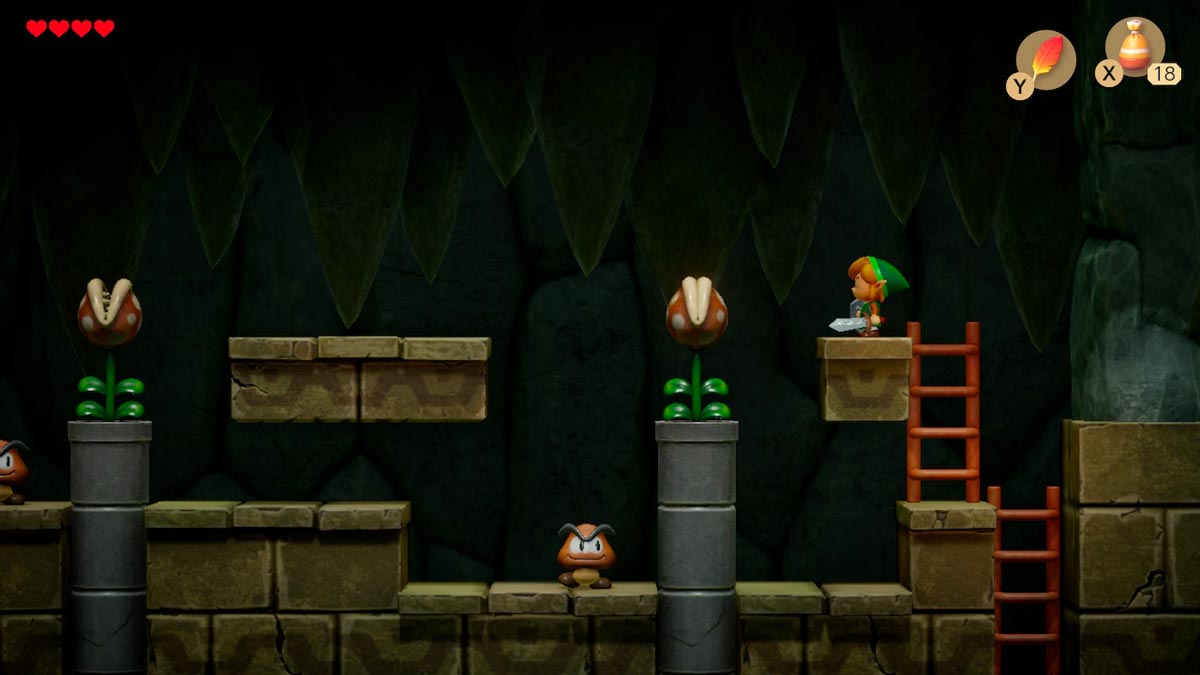 The grid design intuitively guides you around Koholint, yet knows when Link needs a little nudge in the right direction. NPCs offer up some clues as to where to go next to complete optional side quests, but it’s the mysterious owl who (hoot!) dispatched Link on this quest to begin who often appears with critical information.

That quest is to collect the eight Instruments of the Sirens, by defeating the eight dungeon bosses, to wake the Wind Fish who is sleeping atop a giant egg on the tallest mountain on the island so Link can return home. Even by Zelda standards it’s more than a little kooky, however, the offbeat narrative allows for some quirky characters with dialogue that is noice, it’s different, it’s unusual.

Backtracking, largely to access previously item-gated areas for heart pieces or the collectible secret seashells, can be a little tiresome, but is mitigated by fast travel points that become even more accessible with a catchy ocarina tune. The limitations of combat do become more apparent in the over-world when walking through the same grid several times in succession, causing the same rotating cast go enemies to respawn.

There comes a point where ‘90s Game Boy swordplay drives you to run past to the next screen, in stark contrast to the relatively unique dungeon designs and satisfying puzzles. The side-scrolling segments, largely featuring Mario enemies that can be bonked on the head or eliminated by sword, are also a nice change of pace. While I’m sure it was intended as a nod to Zelda II at the time, it feels more like New Super Link Bros in the current climate. 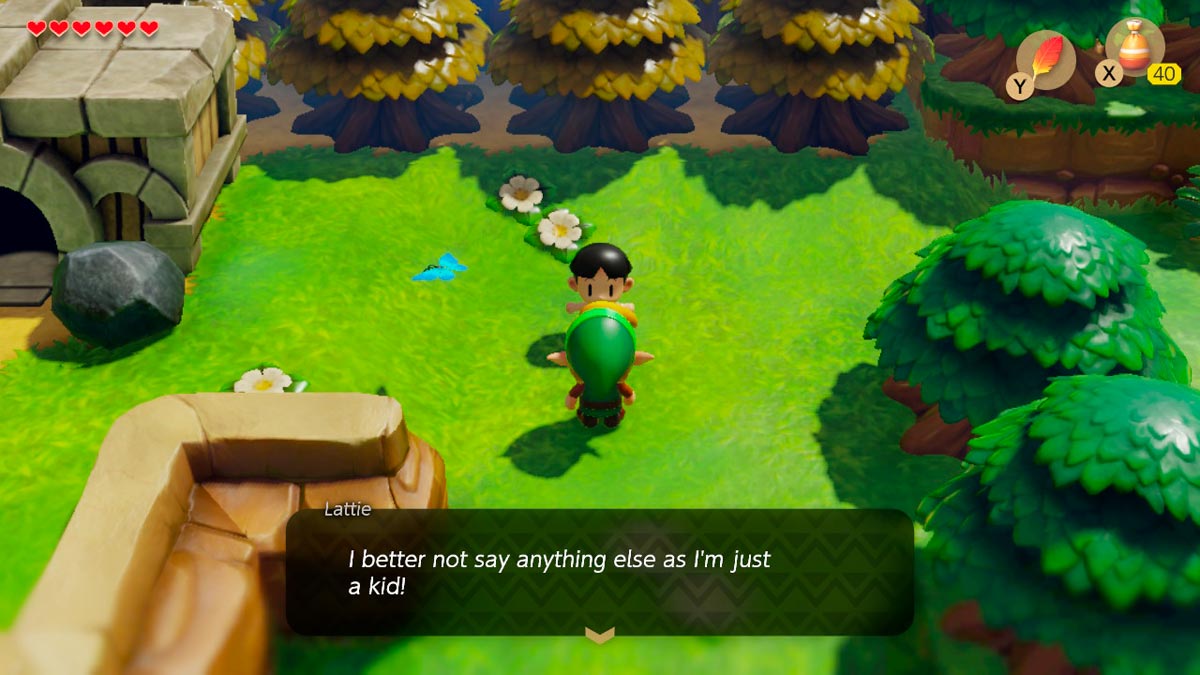 For all that it does well, Link’s Awakening does suffer some technical issues, in both docked and handheld mode. It struggles to keep a stable framerate, fluctuating very noticeably in some sequences, even with few enemies on screen. It doesn’t really affect the gameplay, as it’s least noticeable inside dungeons, and never resulted in an enemy getting the upper-hand, but it is very distracting as it’s all over the place, up and down. Hopefully it can be improved with a patch post-launch.

While Link’s Awakening is about as faithful as a remake can be, the new content expands beyond modern menus, a proper map and improved enemy AI. There’s a full dungeon creator, a quasi Zelda Maker, that takes advantage of the formulaic design. It’s swapped in place of the Camera Shop, seeing how your rusty old Game Boy Camera is no good here, and adds some depth for anyone who fancies themselves as an action-adventure designer. It isn’t as detailed as Mario Maker, and lets you rearrange the components that form dungeons to make your own. There’s something here, although, if you’re more of a player than a creator with Mario’s hardhat on, it needn’t be part of your awakening.

Having previously only dabbled with the Game Boy Color remaster, it was about time I gave Link’s Awakening a proper go. In turn, it rewarded me with one of the most engrossing and rewarding gaming experiences of 2019. Despite being over a quarter of a century old, the gameplay holds up remarkably well, especially the short and sweet dungeons and delectable puzzles. It’s one of the shorter Zelda games, clocking in at 8-10 hours, but it’s quality over quantity with a relaxing and familiar The Legend of Zelda jaunt.

The Legend of Zelda: Link’s Awakening was reviewed using a promotional code on Nintendo Switch, as provided by the publisher. Click here to learn more about Stevivor’s scoring scale.