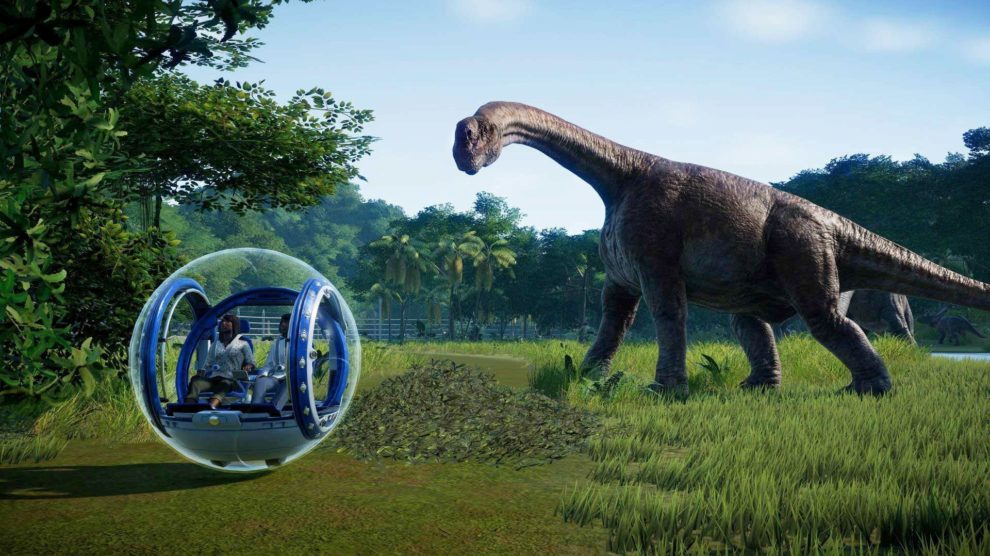 Movie tie-ins. Love ‘em or hate ‘em (and you really should hate them), they’re designed with a primary purpose in mind: to get franchise fans buying games. While this is true with Jurassic World: Evolution, it’s hard to deny there’s also a decent world-building game to be had.

Once you figure things out, that is.

Developed by Frontier, the same studio behind Planet Coaster and Zoo Tycoon, players can expect mechanics from both titles within Jurassic World: Evolution. You’ll start off on Isla Matancetros, the easiest of the five-island chain that makes up The Five Deaths. Initially guided by none other than Jeff Goldblum, you’ll be presented to the basic mechanics of the game. Players are tasked to build a dinosaur park, complete with dino-making machines, enclosures and basic infrastructure. Three main progression routes – Science, Entertainment and Security – will help to shape your park; working through one route will provide additional perks, buildings and other goodies, though it’ll lower your progression across the others. Like most games of the genre, it’s all a balancing act. 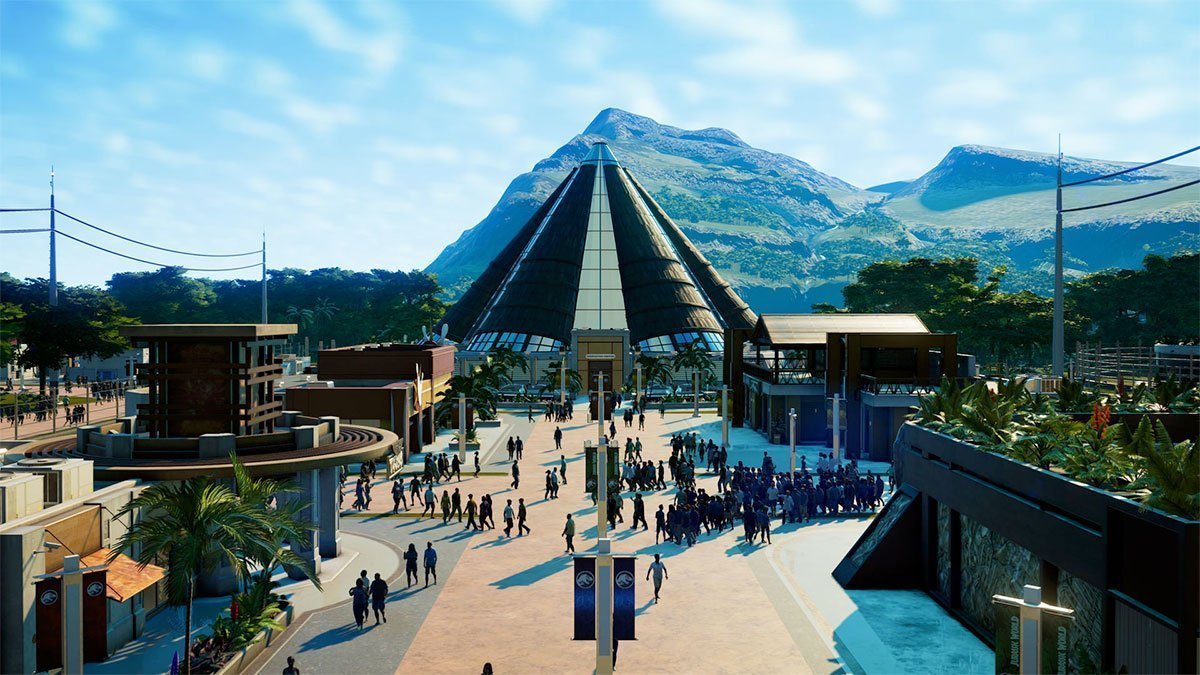 While Evolution does a tremendous job in the game’s first minutes, it completely drops the ball shortly afterward. There are a lot of balls to keep aloft in Evolution, and I found myself failing, and spectacularly so, on Isla Matancetros. It wasn’t that a herd of T-Rexs were suddenly mowing through my guests or anything, it was just that I over-extended and boringly ran out of money. Numerous times.

I ignored my patrons in one run, forgetting to place concessions around my park, and guests responded by leaving. No guests equals no money, and I sat languishing in boredom as a result. Another time, I went too hard on fossil collection, spending big money on expeditions that I couldn’t see through; harvesting DNA costs money, and I didn’t have it. A third time, I experimented with different genomes, making my dinosaurs visually pleasing, but also crippling their viability – I ran out of money because my eggs just wouldn’t survive gestation.

If you stick with Evolution, though, you’ll eventually learn its ins and outs by process of trial and error. Thankfully, any research or over-arching progression you make is retained even when restarting an island (and trust me, you’re better off restarting most islands). I felt pretty proud of myself when I not only five-starred Isla Matancetros, but completed the top-level story missions given to me by the Science, Entertainment and Security wings. 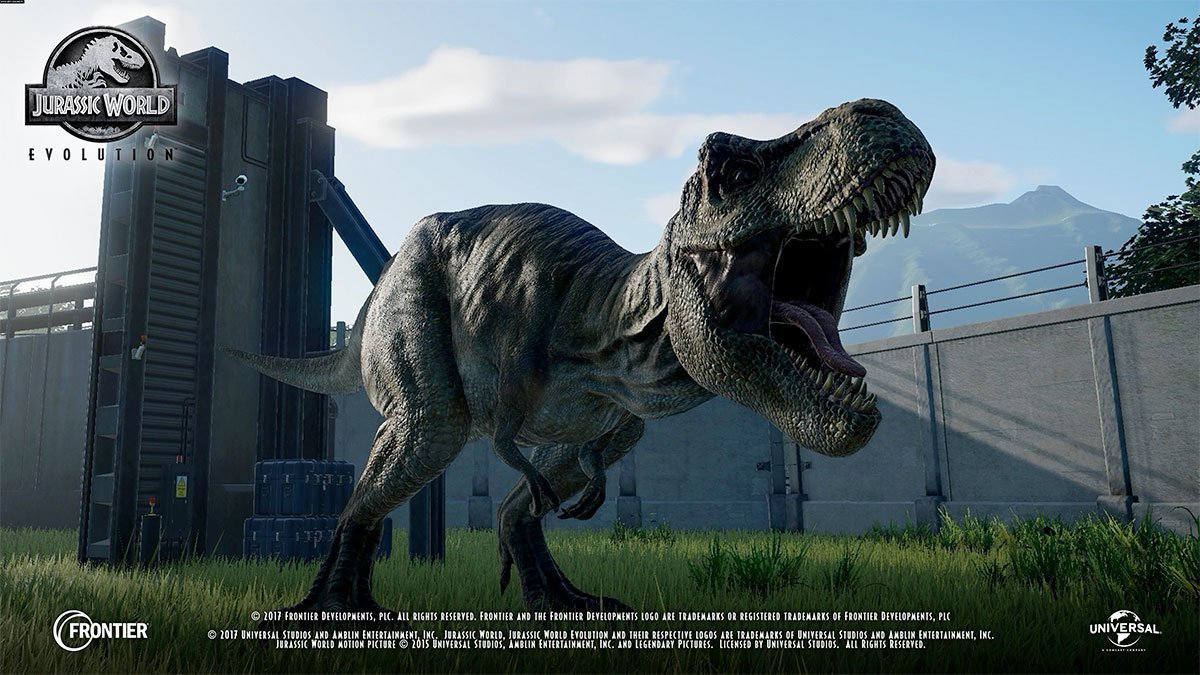 As you get better with the game, you’ll unlock additional islands to tackle; the first step from Isla Matancetros is Isla Muerta. If you thought the learning curve from the tutorial to the game proper was steep, you’ve not seen anything yet. Put simply, Isla Muerta kicked my ass. Thrown into the deep end with hardly any cash, you’re tasked to repair a storm-ravaged park as additional storms threaten to move in and ruin all you’ve built up. Super aggressive dinosaur DNA adds another log to the fire and the result is purely chaos.

While it’s sometimes enjoyable to fail in Evolution, Frontier needs to do a better job of helping players understand mechanics and how they actually tie in to one another. It’s absolutely soul crushing to build up a park only to have a group of velociraptors break through a heavy-steel electrified fence and rip through park-goers, racking up $500,000 in lawsuits from deaths and maiming.

I was watching everything take place and doing my best to mitigate it, repairing the fences, sedating dinosaurs and sending patrons into shelters. Despite my best efforts, the damn raptors kept breaking out for a solid half-an-hour period. I just couldn’t fight back against the tide, and I to this day have no understanding of why things panned out the way they did. Granted, I could have sat there for an hour or two and let my income slowly build back up to pay people, but an island restart was far easier. Round and round we go. 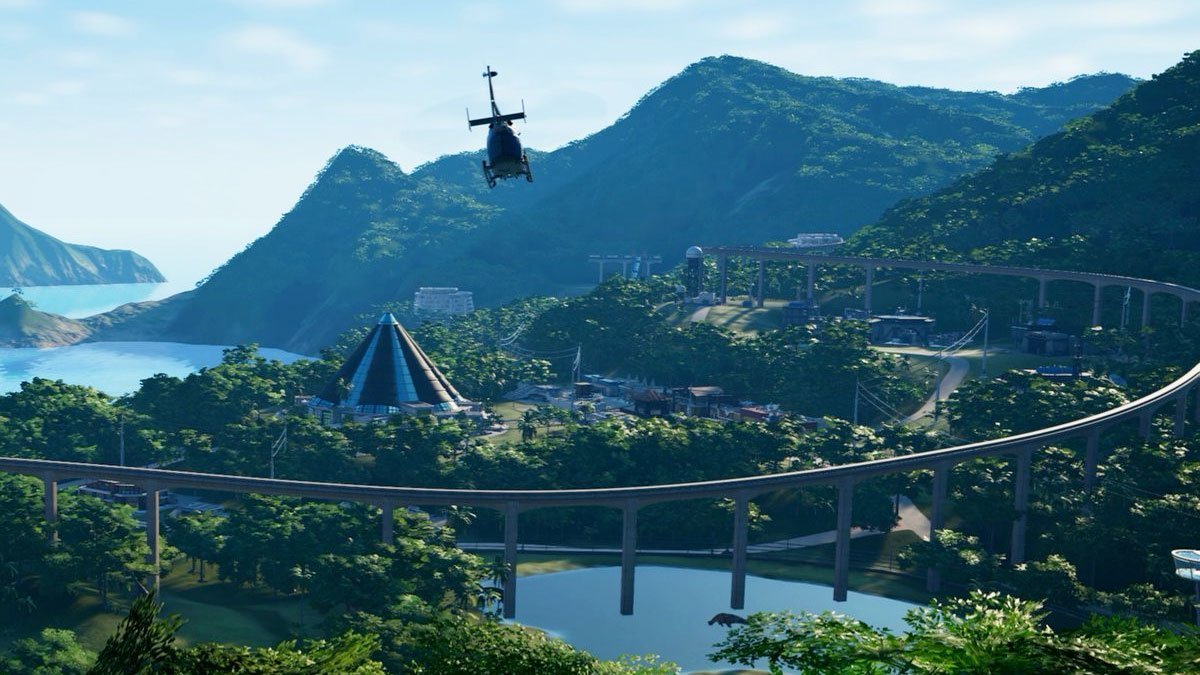 Perhaps the best bit of Jurassic World: Evolution is to keep failing, slowly building up research and dinosaur DNA in order to head over into the sandbox that is the first Jurassic Park, Isla Nublar. There, the sky is the limit – with infinite cash, you can build anything you’ve unlocked, allowing you to make the park of your dreams without the constant worry of storms, sabotage or crazy dinosaurs. It’s the best bit of the game.

That said, even with advanced unlocks like a monorail system and gyrospheres, there’s not a lot of variety in the game. You’re locked into a handful of building types and even limited dinosaurs. Here’s hoping Frontier will add more in down the track.

Jurassic World: Evolution is a decent movie tie-in with amazing potential; if Frontier can equip players with the knowledge they need to tackle its increasingly difficult island chain, this one will have some legs.

Jurassic World: Evolution was reviewed using a promotional code on Xbox One, as provided by the developer. Click here to learn more about Stevivor’s scoring scale.