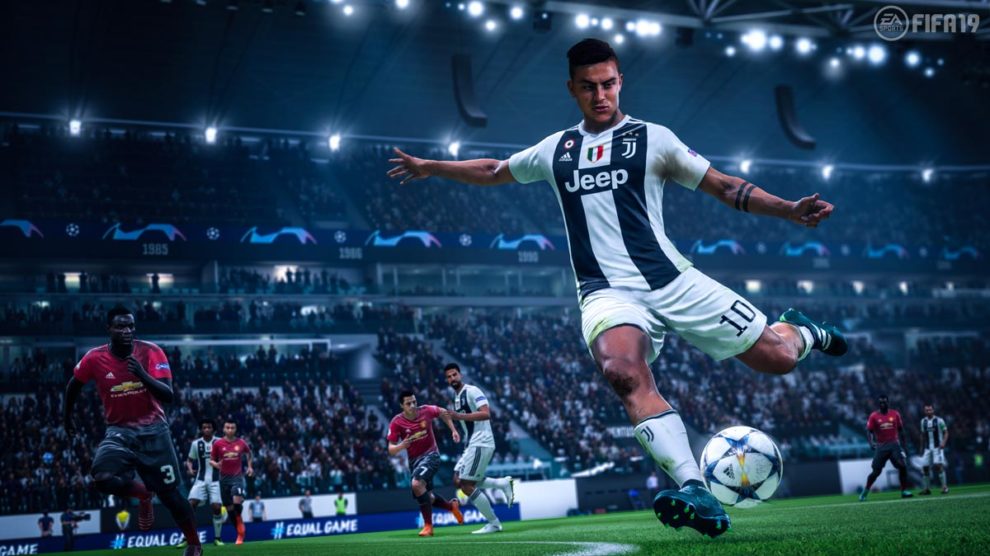 FIFA has been bouncing between tweaking offensive and defensive gameplay with each iteration this generation, but it’s always retained its free-scoring foundations. The shoot button has finally moved into the firing line in FIFA 19, and while timed finishing is destined to be divisive, the introduction of UEFA competitions, including the Champions League, is a surefire winner.

Ball control on the whole has been overhauled this year, but it’s scoring that’s most noticeable. More precise and stable control over the ball allows for tighter passages of play and passes that previously would have been cutoff by the conquering predetermined paths of defenders. Inside the penalty area, FIFA 19 finds space in the highest congestion, with pinpoint passes and centimetre-perfect crosses, which open up new avenues to goal.

The flip-side sees the ball get away more often when things don’t go according to plan. As you come to grips with the timing, even Ronaldo will lose control of a loose ball on anything above Semi-Pro difficulty. It doesn’t take long to adjust, but there will be moments of desire for the comfort of FIFA 17 and 18. It’s really been a slow shift away from the magnetic passes of FIFA 12, each year passes have felt less automated, and FIFA 19 continues down the same path. 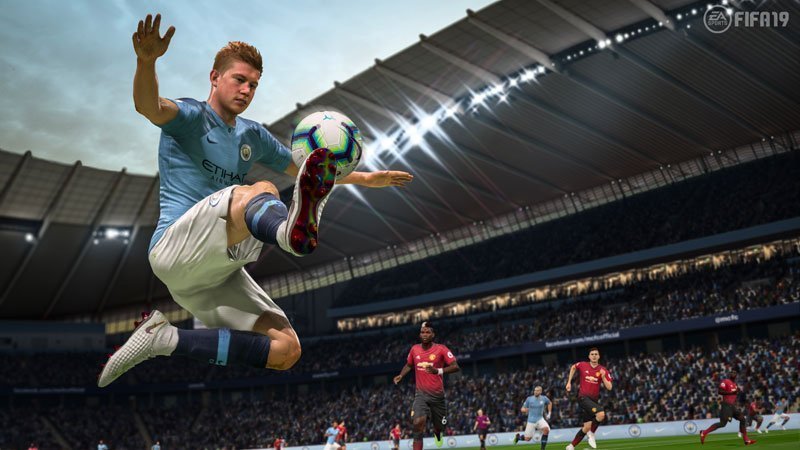 There are a few tiers of training to help guide you through the precision control, and while returning players will look to disable the button prompts immediately, leaving the movement and timing indicators on for a few hours is the best way to familiarise yourself with all that has changed.

The timed finishing scoring bar, which determines the exact moment the ball is hit towards goal, is where you’ll need the most help, before it eventually becomes second nature; that hasn’t happened for me yet. Timed finishing is a fancy name for a second touch of the B or Circle button. The first initiates your intention to score, while a perfectly timed secondary command executes a powerful strike almost guaranteed to make the keeper work for his pay, if not find the back of the net. The further you drift from perfect timing, the further your odds of scoring plummet.

I’m not sold on this concept — and rest assured the traditional one touch shooting is still an option as timed finishing can be disabled at any time — but I will say it removes some of the frustrating luck associated with scoring in FIFA. The rub of the green is still part of the package, but having a mate pull off a miraculous long range shot through impeccable timing is marginally easier to swallow than plain old dumb luck. 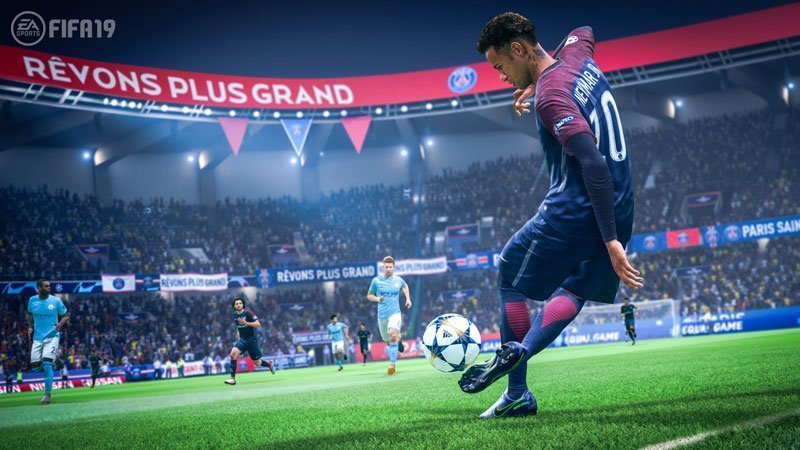 The additions of the UEFA Europa League, Super Cup and Champions League, alongside 16 La Liga stadiums, will be the biggest calling card for fans unsure if FIFA commands an annual update anymore. The stadiums and the broadcast of the premier European competitions all look fantastic, as we’ve come to expect from EA Sports’ immaculate attention to detail.

As a long time player, the introduction of UEFA includes the extremely welcome addition of two new commentators in Lee Dixon and Derek Rae. I’ll be honest: as an Aussie who doesn’t really follow the Champions League, because I prefer to sleep at 3:00am and Optus Sport is a total shambles, I have no idea who these blokes are, and I can’t speak to their knowledge of the game. But their fresh commentary is a welcome relief from Martin Tyler and Alan Smith, who ran out of things to say many years ago.

It would almost be fitting to copy and paste what I wrote about FIFA 18’s variety of game modes; although “it’s astounding how many game modes FIFA offers” comes across more than a little generous 12 months later. It’s an identical roster on all fronts, and while I was ready to deliver an almighty spray about the lack of progression for key modes, the biggest step forward is where I least expected to find it. 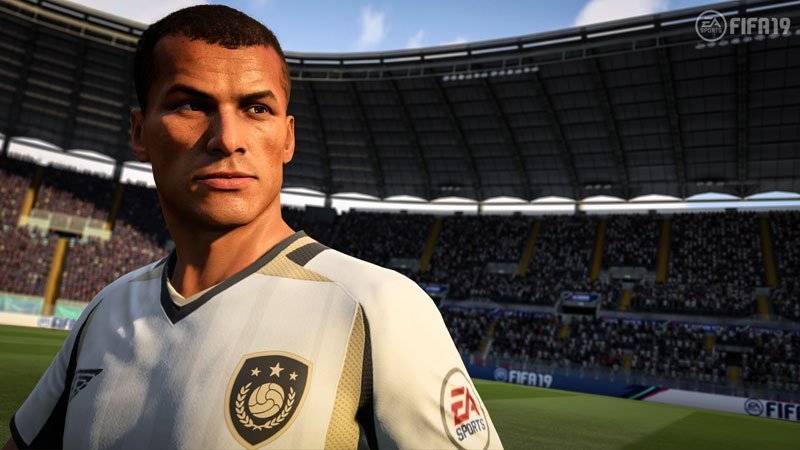 It’s easy to overlook, but the most meaningful enhancement is the overhaul of Kick Off; the last mode you would probably think off if I asked you to name them all, but one of the most played — we used to kick off daily at lunch time, and the new options are perfect for that kind of play. A new sign-in system linked to your Gamertag allows you to track your progress, and your victories, against an opponent across multiple consoles within the same family (since it’s just stats, it’s a shame this doesn’t extend across platforms — based on current events, we can probably blame Sony).

There are better options to setup “best of” matches, perfect for a fiery Friday afternoon, and more quirky options like survival mode, which eliminates a player each time you’re scored against, and headers and volleys only, which speaks for itself. These are considered house rules, but there’s no way to customise them further, so they’re really a selection of EA’s rules that allow more variety. They aren’t true house rules until I can setup ‘only the goalie can score’ (or at least ‘goals scored by the keeper are worth 5 goals’).

Aside from the Champions League taking up a tile, there aren’t many other changes this year. Career Mode and Pro Clubs are carbon copies, and women’s football is well and truly buried now. Even Ultimate Team, the most popular option, doesn’t offer anything of note. Division Rivals is barely worthy of a ‘new’ tag, so if FUT is all you’re interested in, and you’re not going to branch out into the UEFA content, there’s no reason to upgrade from FIFA 18.

The focus has clearly been on the third season of The Journey, which now tells three intertwined storylines. Alongside the returning Alex Hunter, his half-sister Kim and larrikin best mate Danny Williams become playable characters. 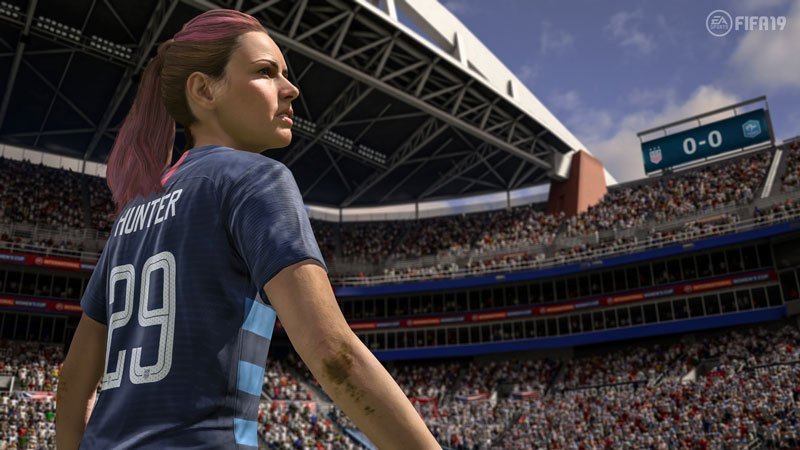 While this is the most involved incarnation of The Journey, it’s also the most disappointing. The whole concept has failed to evolve since it was first introduced, and still suffers from the same problems as the inaugural season. There are some interesting story beats at the bookends, but the middle section is far too long and tired; I suspect most won’t make it to the end of this trilogy.

There’s too much repetition and the “key decisions” don’t actually seem to matter. The new playable characters act as a course correction, as Alex’s once promising journey has gone off the rails. It’s been a mistake to keep him so young, as the 19-year-old has played for what feels like half the world’s football clubs. When he was introduced as a 17-year-old, I assumed we would skip forward and see his career peak in his 20s in year two and a twilight period ahead of retirement, and maybe even a miraculous comeback, in his mid-30s. But it’s tried to cram too much drama into a teenagers career, and now has done the same thing with his 16-year-old sister, who had a cameo as an international player last season. It’s a bunch of teenagers hanging out with a few real world soccer stars, it’s run out of steam, and Kim’s bland persona and Danny’s generic comic relief aren’t enough to revive it. I still like the concept of The Journey, but it hasn’t evolved as I’d hoped and would be improved by being considerably shorter with decisions and stats that actually matter.

While The Journey fizzles out, the addition of UEFA competitions including the Champions League makes FIFA 19 an obvious upgrade for a passionate group of football fans. Timed finishing is the biggest change to gameplay in years, so much so that it can be disable during a match, which leaves it somewhat in limbo. It could be a genuine game changer, or it could be abandoned on mass and nowhere to be seen in FIFA 20.

Update 1 October 2018: Since originally playing on Xbox One, we’ve had a chance to play the mixed Nintendo Switch version of FIFA 19 — and it should definitely be called something else.

It’s a phoned in version of FIFA 18 for Switch, which itself was nothing like the PS4/Xbox One version of the game. We don’t expect it to run on Frostbite, and that means no The Journey, but it’s disappointing to see EA give the Switch version such a small makeover.

Ultimate Team missed some key features last year, and they’re still nowhere to be seen in FIFA 19; so don’t expect the one new feature in the real version, Division Rivals, to ever come to Switch.

On the plus side, the Switch version does get the great new Kick Off features, detailed above, as well as the Champions League content. While the gameplay on the pitch is quite dated, at best it’s a tweak of FIFA 16, there’s no doubt this is the best portable version of FIFA we’ve had — it’s just that it’s the same as last year, and is deeply inferior when in Docked mode compared to the real game. It’s great EA is back to supporting Nintendo’s handheld, but if they’re only going to do so half-heartedly, the Switch version really should be half its price.

FIFA 19 was reviewed using a promotional code on Xbox One and Nintendo Switch, as provided by EA. Click here to learn more about Stevivor’s scoring scale.