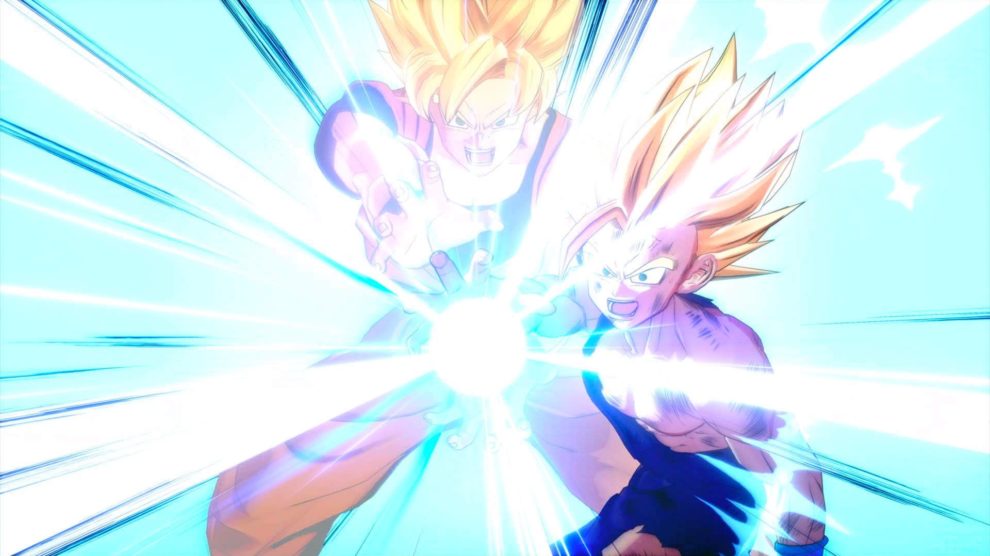 Dragon Ball Z: Kakarot finally delivers the console experience I always wanted playing The Legacy of Goku series on Game Boy Advance. It retreads a familiar story and reconstructs iconic battles we committed to memory in childhood. Yet, it steps back and removes the magnifying glass from the frantic fighting that normally dominates game adaptations. That allows us to absorb the larger world of Dragon Ball Z that was so prevalent in the anime, but often overlooked in the games, in a fully fledged action role-playing game.

Kakarot does an admirable job of condensing 291 episodes into a more palatable 30-35 hour single-player adventure — considerably more if you choose to heavily invest in side missions. It’s distinctly split into the Saiyan, Frieza, Cell and Buu Sagas, with smaller arcs filling gaps, and clear intermissions between each with encouragement to take a break from the main story to gain EXP and delve into the considerable optional extras.

This approach puts the world of Dragon Ball Z and evolving relationships between its characters at the forefront, nudging ahead of the conflicts and story we’ve seen before. So whilst it’s largely familiar material, it’s a somewhat new way to experience it — at least new on this scale. 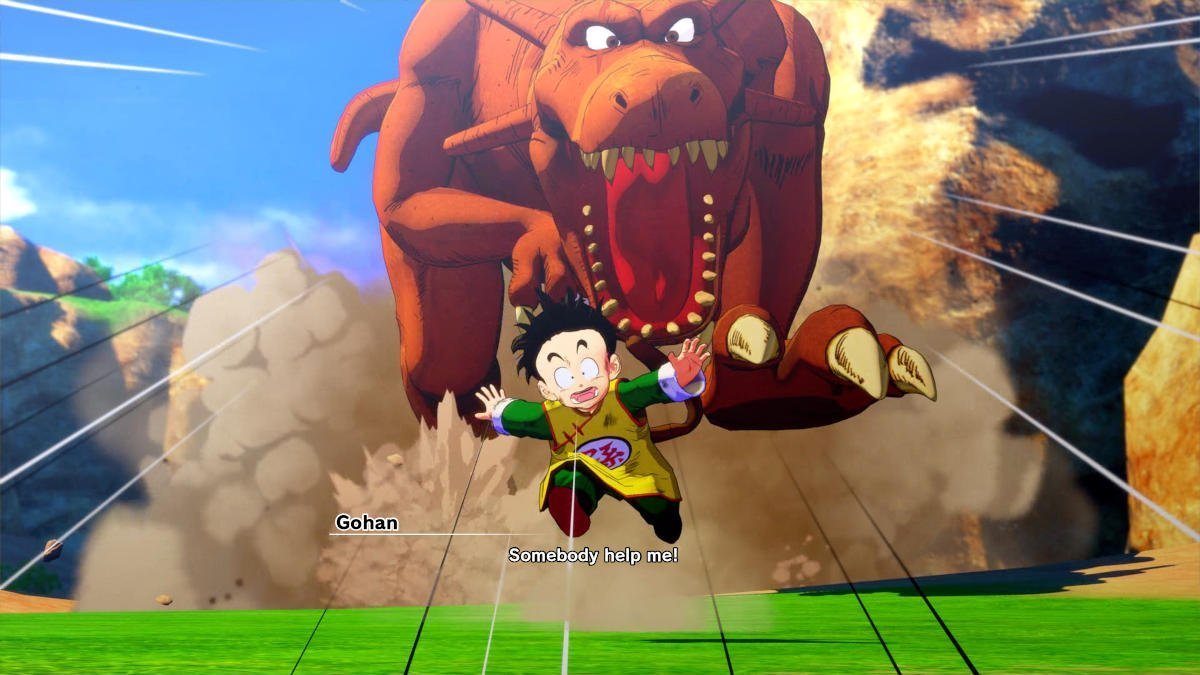 Assumed knowledge is mandatory, and developer CyberConnect2 doesn’t attempt to retell a story you already know, but rather recap it. It knows when to slow down for the goosebump story beats, but for the most part the main missions move at a frantic pace and skim over key plot points; either through text between cutscenes or single lines of dialogue that summarise events in 12 seconds that spanned 12 episodes in the anime. Having not revisited the full story in years, it served its purpose to jog my memory — especially with some of the smaller details that are still highlighted — but there were a few moments I was anticipating, only to have them pass by in an instant or be omitted entirely.

While it can feel abrupt at times, this fast-forward retelling was the right way to go. The audience is already acutely familiar with the narrative, so there’s no need to get bogged down in the detail. It’s driven by a delightfully faithful art style with a blend of fully voiced cinematics, in English or Japanese, classic RPG in-game text chat and snippets of narrative overlaid on still images.

Whilst diehards will revile my blasphemy, I couldn’t have made it through such a comprehensive campaign with subtitles if there wasn’t an English option. The cheekily loveable inflection of Sean Schemmel’s Goku is DBZ to me — it doesn’t feel right without him — and the pinning of childhood nostalgia is immediately satisfied by the returning English cast. While all main missions feature full voice acting, it doesn’t extend to side missions, where text is accompanied by grunts, cheers and bad catchphrases; it’s more than a little distracting when the rest of the presentation is so captivating, and I would have preferred if they just remained silent entirely for these missions. The accurately animated art style looks great, aside from the odd rough edge, but it’s the grouping of quasi-episodes introduced by the iconic Dragon Ball narrator that caps the fantastic presentation. 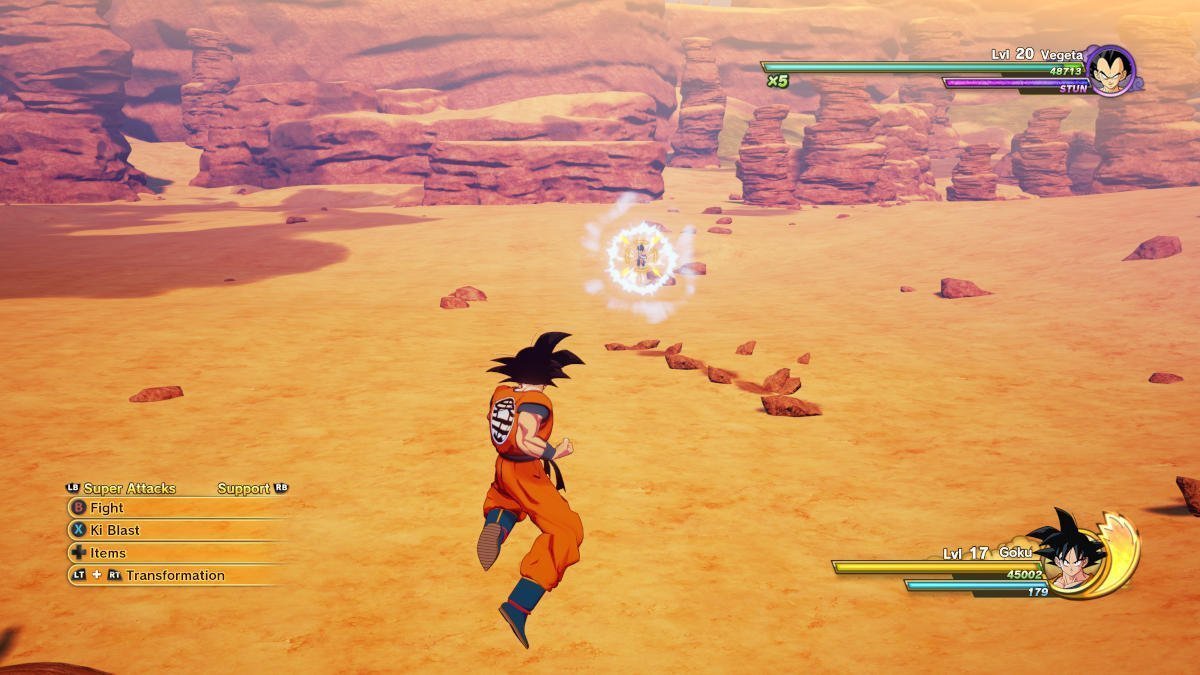 The inherent design of DBZ fighting games forces balance between players; Krillin needs to be able to defeat Super Saiyan Vegeta in FighterZ. It’s a conflict at odds with the premise of the manga/anime series. DBZ: Kakarot more closely mirrors the power discrepancies between fighters that are crucial to the narrative, and that starts with Goku. While he eventually ascends the ranks and becomes one of the strongest fighters in the universe, he is the underdog for most of his DBZ tale; as he becomes stronger, more powerful enemies emerge.

It’s the perfect cocktail for a story-based action-RPG. You already know Goku is on a path to immense power, as are his opponents. The gamification of developing powers and unlocking upgrades on skill trees is effectively inbuilt to the narrative. How much of that you unlock is up to you.

Predicable key powers are tied to main missions, but levelling up each of the playable characters beyond that is dependant upon how much of the optional content you choose to explore — and yes, while this is really Goku’s story, as he spends an unusual amount of time dead or otherwise incapacitated for a series protagonist, much of the game is spent controlling someone else. He needs a little help from his friends, many of which began as enemies, so Piccolo, Gohan, Vegeta, Trunks, Gotenks and Vegito all take centre stage as playable characters, while the usual Z-Fighters are in-tow as support, all of whom can power up. 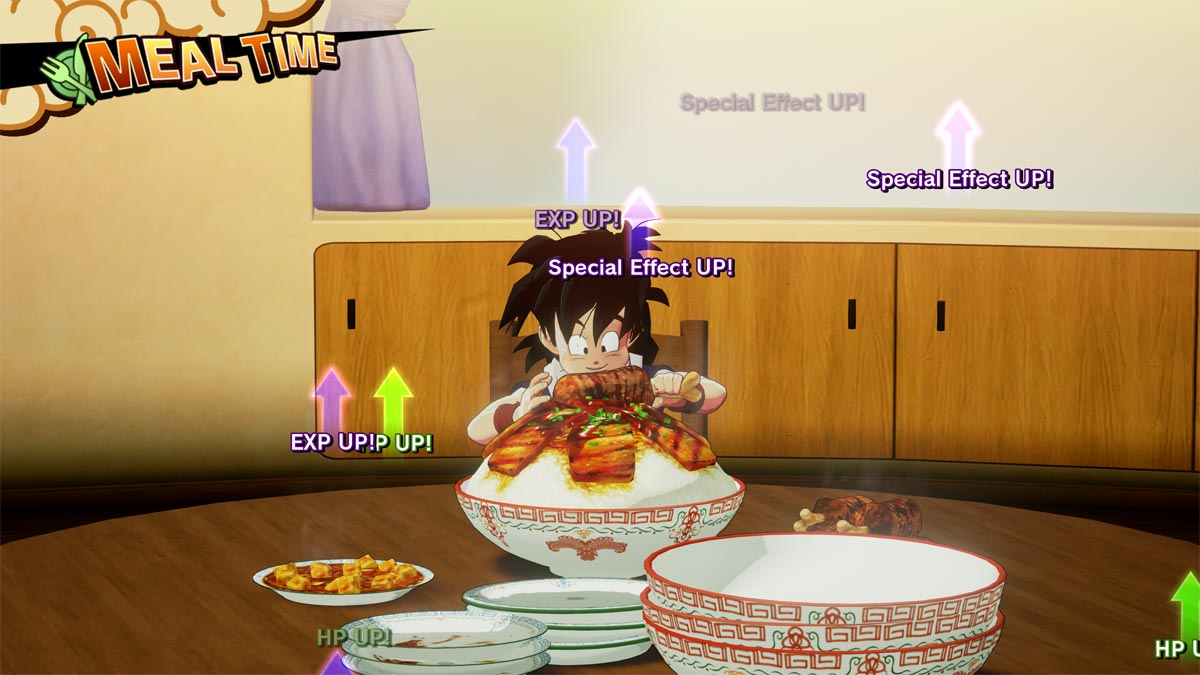 Everything that appears in the world revolves around levelling up, and it is all largely optional. An empty stomach is more of a threat to the longevity of the planet than most of the villains, so grabbing some grub and having Chi Chi begrudgingly whip up an appetising feast before a big battle is key to success. You’ll have to hunt for food and find new recipes, which in-turn unlocks permanent or temporary stat buffs. While it’s always been in the background of the fighting games, stuffing your face is now as important as other culinary obsessed RPGs like Breath of the Wild.

Beyond that, the open areas are littered with coloured orbs to collect like it’s 1998, which are cashed in to upgrade abilities. You could spend hours channeling Spyro to collect them all, but they’re also collected through battles, of which there are many. It’s not a full open world, rather a collection of open areas accessed via a world map, which are littered with generic goons to beat up.

These are triggered like Pokemon battles when you fly too near a patrolling cluster of enemies, and can either engage for the EXP or run away; predictably, it does become tiresome. Tougher versions of these same foes, but glowing crimson so you know they mean business, offer more rewards for the increased challenge. As they are defeated, they are replaced by even stronger enemies — choose to ignore them and avoid the weaklings, or take the spoils knowing a larger challenge awaits. 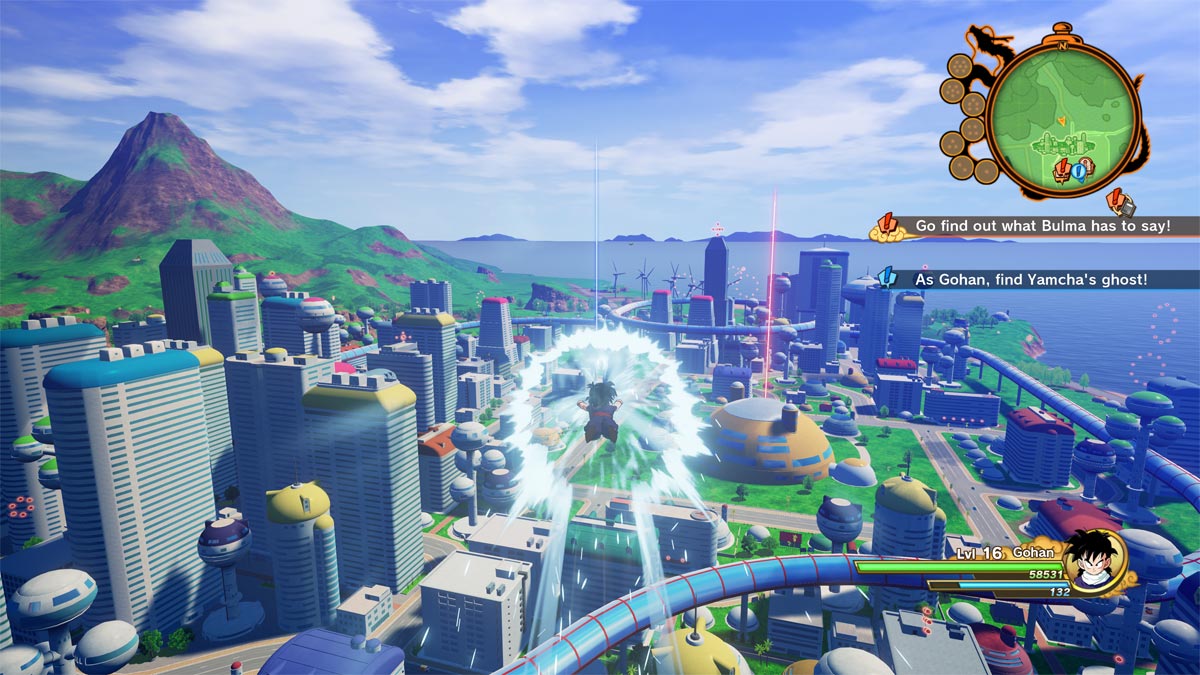 Then there’s the magnitude of side missions that, when combined with these random encounters, effectively doubles the campaign length. Some are interwoven with the main story beats, and others are exclusive to the intermissions between sagas when Goku and his mates let their hair down and mess about learning to drive cars. As promised, some of these develop new minor stories outside the cannon, but most are fetch quests or lop-sided beat ‘em up missions. The lure of briefly encountering a minor character to add to the Community Board — don’t worry, that’s not online nonsense — had me surprisingly drawn to these optional quests initially, but they soon become repetitive. They’re intended to grow the characters, but most are the epitome of optional extras.

The Community Board is a visual representation of Goku’s friendly nature. As new characters are encountered, their circular Soul Emblems are unlocked — basically the DBZ Tazos found in chip packets we obsessed over in the early 2000s — which can be placed on several boards. Goku leads the Z-Warrior board, which improves combat stats, while King Kai runs the Training Board and Master Rochi the Adult Board, which depressingly tracks finances, among others. Placing certain characters together, like a father and son team linking Goku and Gohan, adds additional perks and has you shuffling characters from their original placements. Like so much of the game, it’s a little cluttered at first and could be ignored in favour of smashing the main quests, but that would be to do yourself a disservice. It’s a nifty way to focus on the importance of friendship and relationships to Goku, and it certainly achieved its goal in making otherwise repetitive side quests serve a greater purpose.

The melee combat feels awesome and is built upon a basic combo system that ultimately slams a defenceless opponent into the ground. Knowing when to evade, and when to block, is critical to success, but both Goku (or friend) and his opponent are at the mercy of a Street Fighter-style guard meter; allow the guard to be broken and tired, defenceless Goku is in big trouble. As in past games, ki energy is replenished during battle by powering up. It’s a careful balancing act to spend a few seconds regenerating energy, while leaving yourself vulnerable to attack, but it’s imperative to use stronger energy-sapping attacks, like the kamehameha wave, and to use powerful transformations. 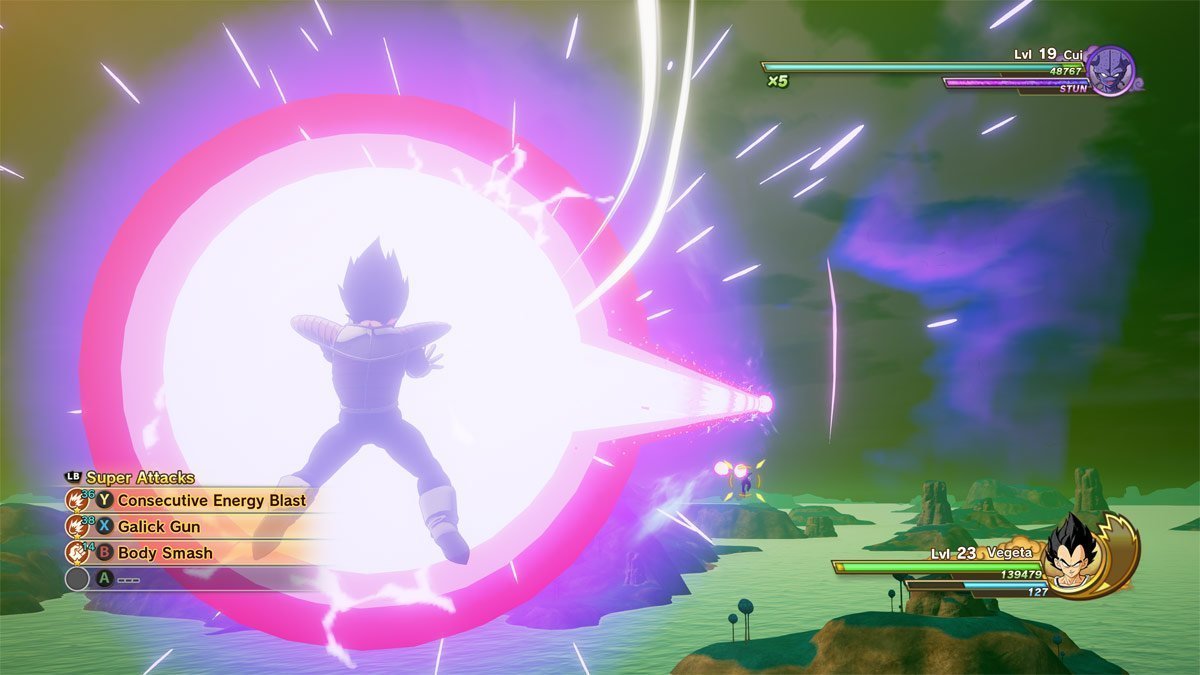 It’s much closer to the brawling of the Xenoverse games than the intricacies of FighterZ, and is certainly more accessible to RPG fans who aren’t invested in the fighting scene. The sheer volume of commands may be a little overwhelming at first, but learning to dodge and counter doesn’t take long, and when it doubt, more casual players can focus on mashing the melee button; so long as they learn how to time super attacks and how to dodge an oncoming blast. It’s less reliant on combos than most other DBZ games, with a focus on timing and calling upon the support of your allies instead. It suits the open levels and focused battles, keeping the same structure regardless of the situation. You’ll feel powerful, and battles against major characters require a level of tactical prowess, but it remains accessible.

There are still some legacy issues that persist from the Xenoverse series. While most of the grand battles are great, sometimes the AI feels dated and the camera can still get itself in awkward positions. DBZ games feel destined to always suffer from incomplete audio — as well as the grunts over the text in side missions, there are often absent sound effects, as Goku silently jumps on the Nimbus to nothing but backing music, only for environmental sounds to later reemerge.

Most noticeable is the slowdown that occurs, especially in the heat of battle with multiple ki attacks on-screen — even on Xbox One X there are moments where everything almost grinds to a halt before the framerate recovers. All fairly minor complaints that collectively feel like a layer of polish is yet to be added — the same layer that never arrived in Xenoverse. 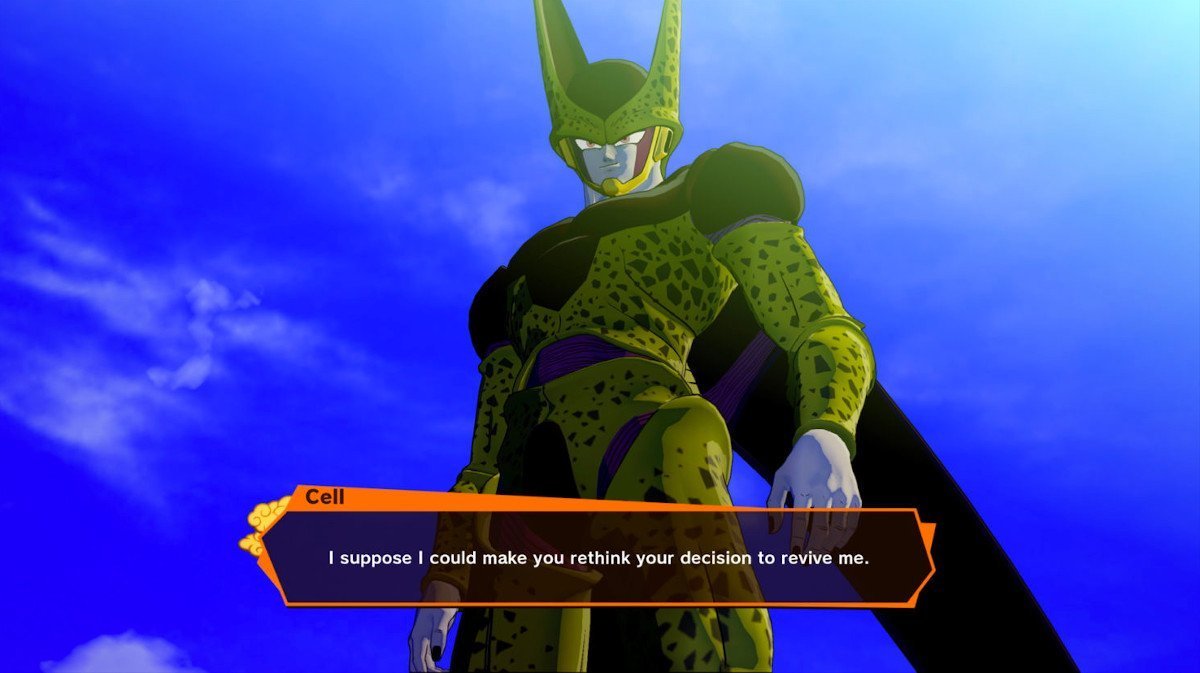 I had high hopes for Dragon Ball Z: Kakarot, and it delivers across the board. Its frantic retelling of a well-worn story enables it to dig deeper into the world and characters of Dragon Ball Z beyond the iconic battles, and it’s all the better for it. It blends a collection of RPG tropes into the Dragon Ball Z universe, intent on keeping its humour, and while some of it feels a little dated and the side missions don’t diverge as much as they could, the overall package is a deeply engrossing fresh way to experience an old staple for any Dragon Ball Z fan.

Dragon Ball Z: Kakarot was reviewed using a promotional code on Xbox One X, as provided by the publisher. Click here to learn more about Stevivor’s scoring scale.