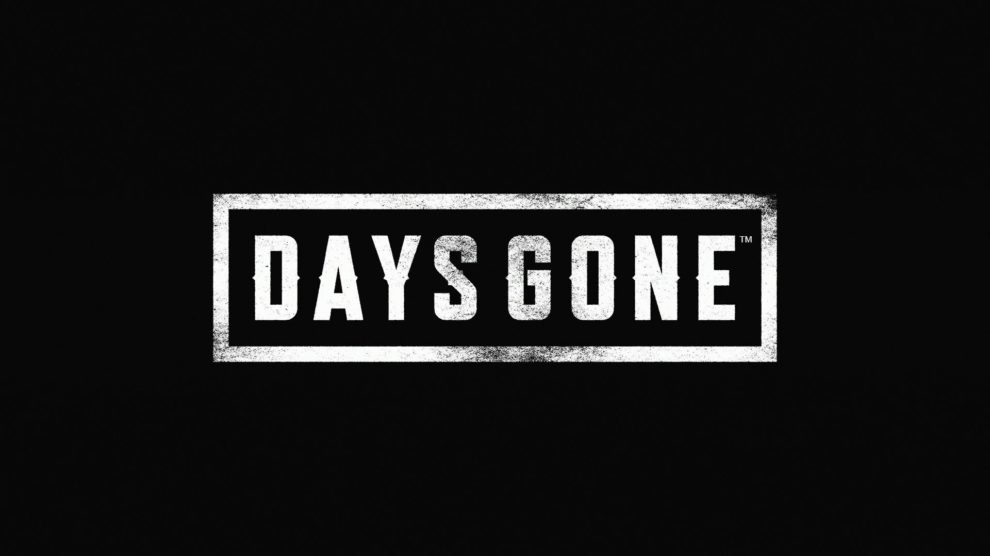 There’s no denying that Sony has smashed it out of the park when it comes to first-party releases in this generation. Starting with Infamous: Second Son, the hits just kept coming with the likes of Uncharted 4: A Thief’s End, Horizon: Zero Dawn, God of War and Spider-Man. Some VR stinkers aside, Sony’s only made one misstep on PS4 to date: the horrendous The Order: 1886. Sadly, Days Gone joins that list of failures today.

I’d have been hard-pressed to believe that when the game was first introduced. Announced back at E3 2016, Bend Studio’s first non-handheld title in quite a while looked amazing, immediately reminding me of The Last of Us (yet another amazing first-party Sony title). Extended footage released shortly after the reveal showed our protagonist, lovable bikey Deacon St. John, holding his own against a zombie horde. If I got to play something resembling that footage, I’d be a happy man.

Days Gone is derivative in every sense of the word, from its core story — a man trying to survive in a zombie apocalypse — down to each and every mechanic you’ll encounter. With a bike to take you from location to location, you’re tasked to scavenge the environment, gathering supplies to build melee and throwable weaponry. Able to hold two firearms and a special weapon in a third slot, Deacon can also use stealth to gain both the upper hand on the undead as well as the unsavoury human survivors who’ve managed to remain alive in a dog-eat-dog — or rather, a mutated-human-eat-human — world. 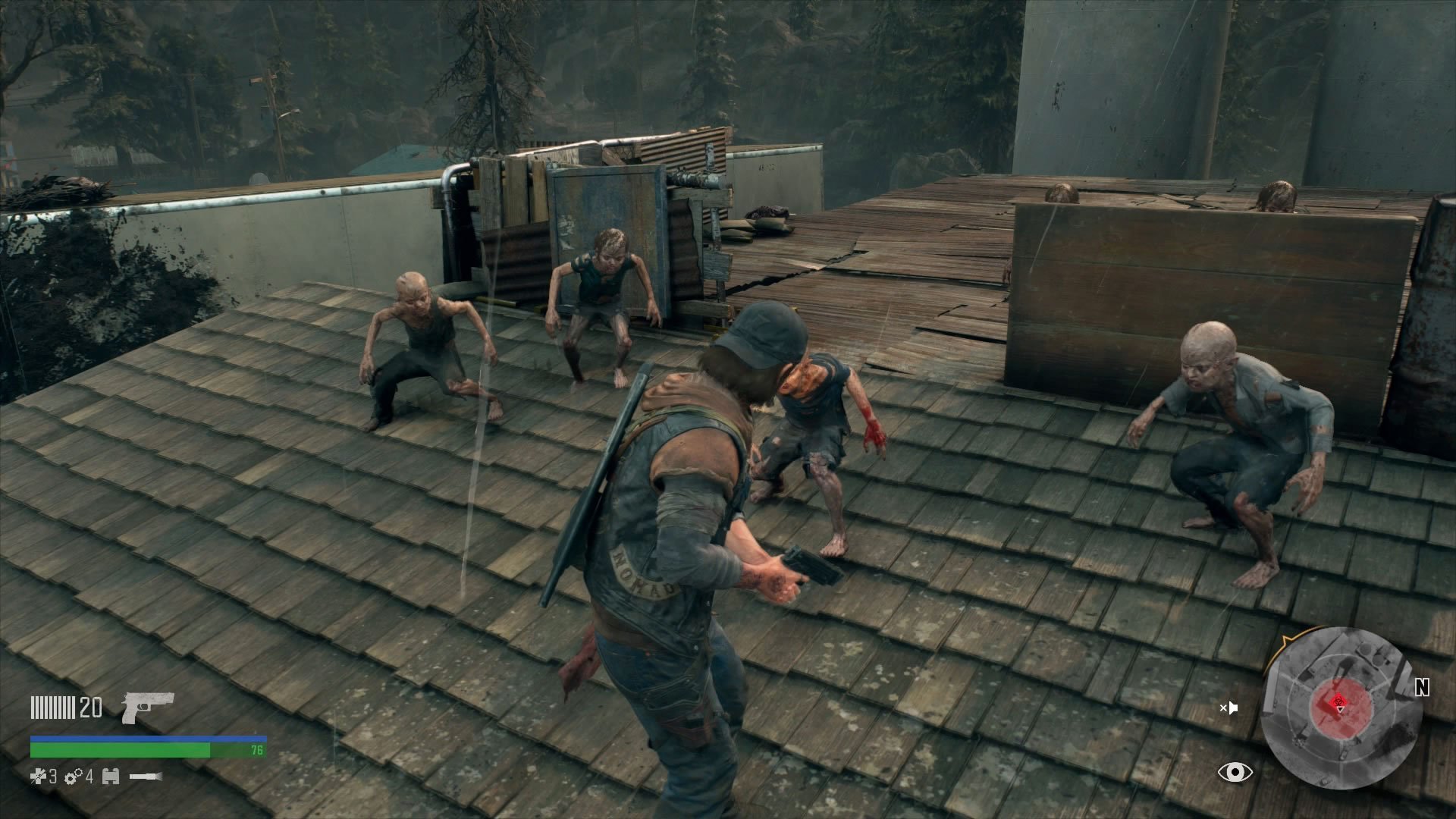 Deacon moves from location to location, either powering up government facilities or clearing enemies from camps; each time he does, a fast travel point opens up. Missions are largely slaughterfests or fetch quests. Others still borrow Assassin’s Creed‘s lame trope of moving to a green circle, as identified on the map, and clicking down on a joystick to activate special sight that’ll show you something that will eventually be indicated by a magnifying glass icon (and then you’ll move on to a second icon, and a third, and a fourth…).

As you drive from point to point, Deacon will be distracted by blue question marks on the mini-map. Sometimes, those marks will give you smaller, blue circles with which to click down on a joystick to activate special sight. Other times, you’ll make it to the mark and nothing of obvious note will be there. Sometimes you’ll enter a special mission where enemies are invulnerable and you go from stealth-and-fight to pure, mission-failing-if-spotted stealth. We’ve seen it all before, and sadly, always better — a wholly undeserved Red Dead Redemption moment where music swells during a forced journey, your character contemplatively narrating all the while, is peak ridiculousness.

The fact that Days Gone borrows from a range of games wouldn’t be such a bad thing if its elements were solid and enjoyable. Regrettably, the entire experience is plagued with bugs and a general lack of optimisation and polish. The first thing you’ll notice is the two minutes and thirty seconds is takes to boot up the game and actually load into its world. I couldn’t bring myself to time loading screens between deaths, but I certainly fired up a timer when one of my respawns placed me between my bike and a mountain and made it so I could barely move. 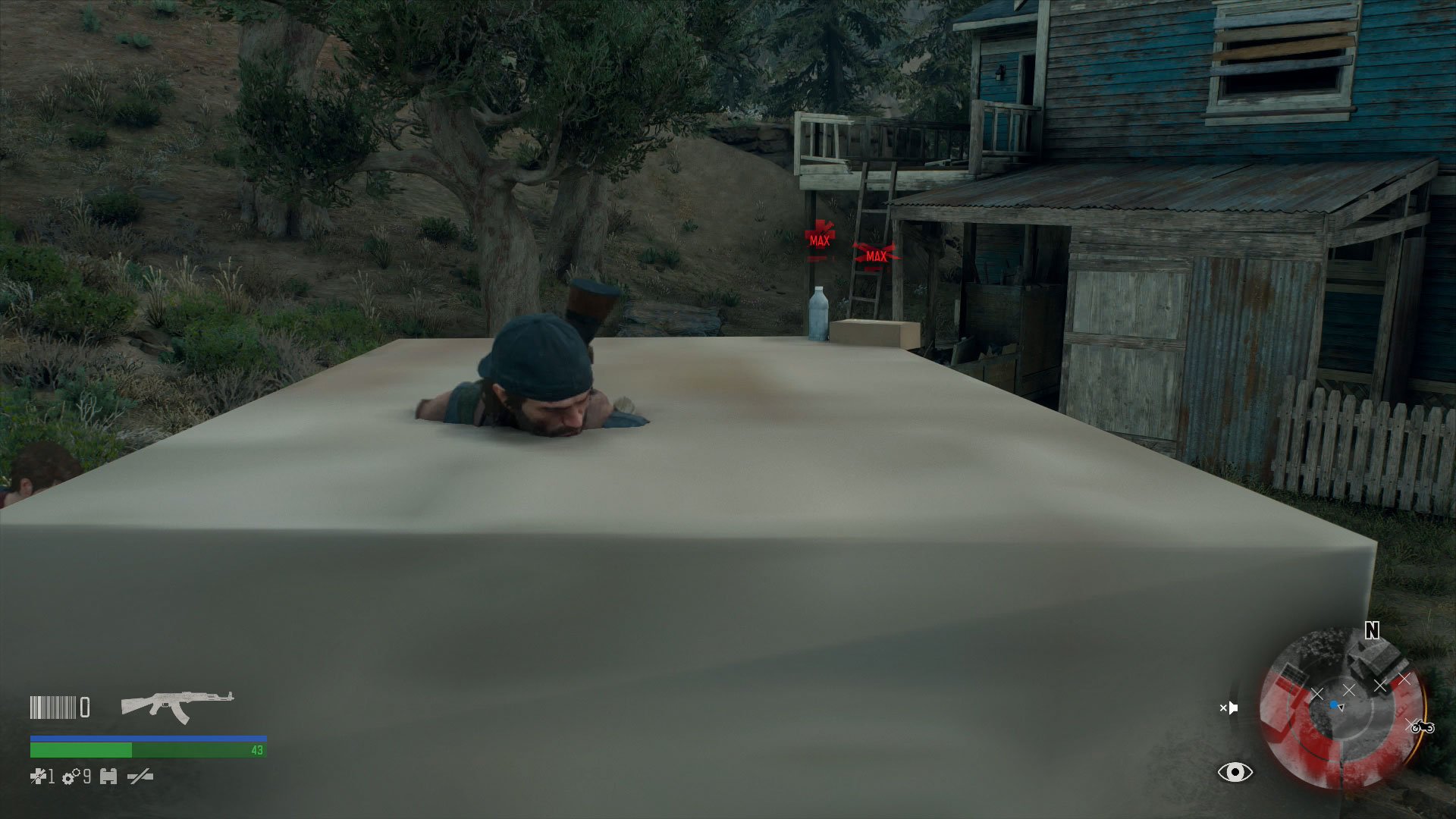 For the record, it took me a little under twenty minutes to wriggle free (two minutes more and I would have reverted to an autosave from twenty-five minutes before that). Similarly, hit detection is absolutely awful — especially when it comes to melee. You’ll need to hope the digital Gods are on your side when you swing a baseball bat or axe at an enemy near a building or a railing or a rock or a hedge, or… well, you get it.

Frame rate issues plague this release, especially during moments while Deacon is riding his bike. It feels like your driving through molasses when this happens and is only compounded if you decide to run over a freaker. In the game’s (completely unnecessary, overly padded) 30-hour campaign, you’ll also find your vehicle randomly rockets into the air when you run over a pebble for some reason. I have a hard drive practically full of clips from crazy, inexplicable bike mishaps. Don’t get me started on textures that very slowly pop-in, or on huge boulders that don’t fully form, letting you walk through them; the same can be said for a quicktime, jump scare animation that plays the first time that you walk into an ambush camp… and every other time afterward.

In my playthrough, I was inundated with radio calls trying to launch new missions whilst in the middle of completing another. Let me tell you, it’s hard to pay attention to something happening down the line when you’re fighting off a group of 14 bandits. Worse yet, and perhaps tied to the radio’s clear lack of concern over whether you’re busy or not, some missions just don’t register that you’ve completed them. Much like in the case of a respawn against a mountain going wrong, you’re forced to revert to a previous save to try again. All this is contrasted with sections where you literally have zero missions to embark upon and are forced to twiddle your thumbs for five or ten minutes before your radio fires up and provides direction. 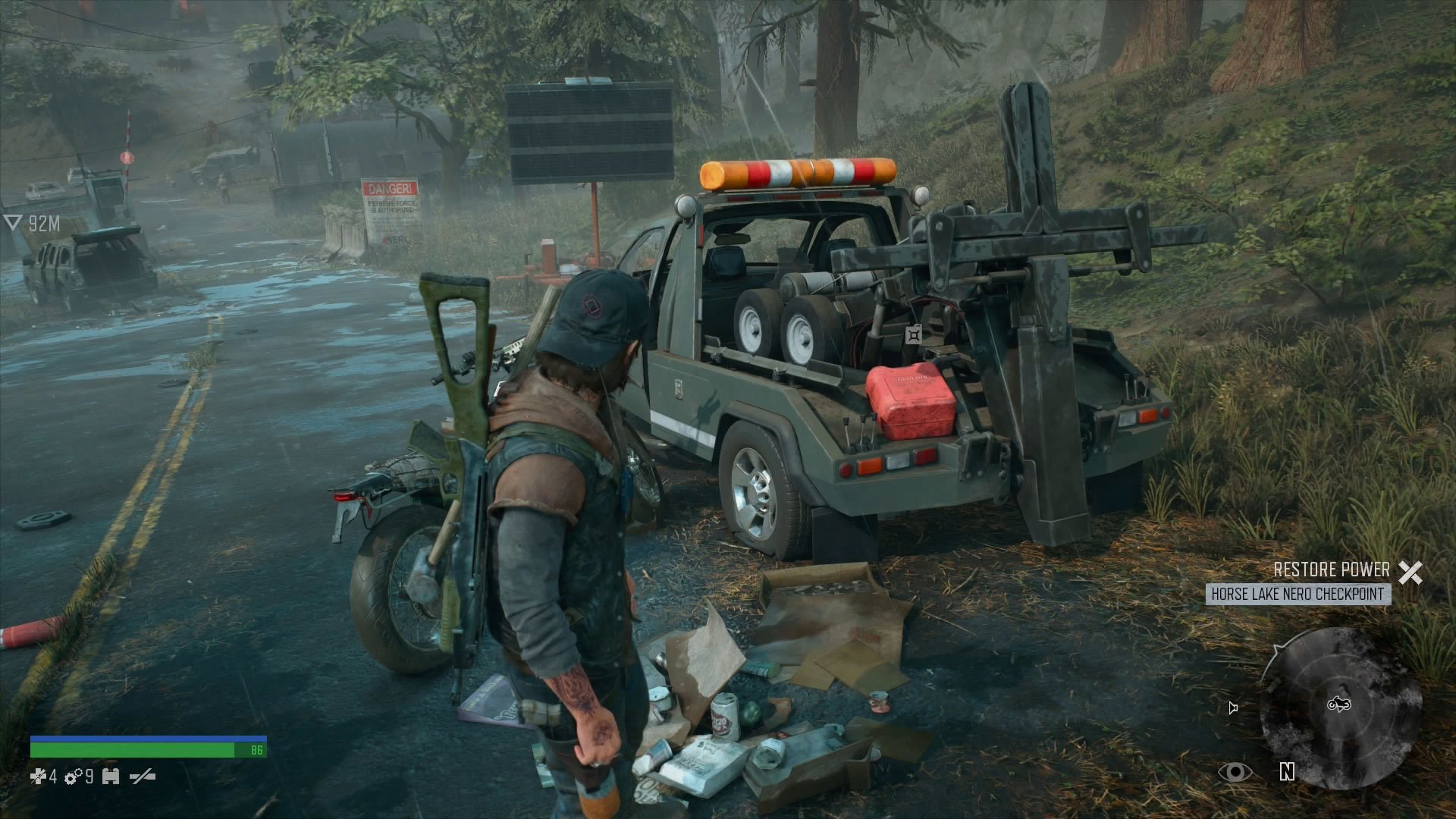 Bugs aside, Bend Studio has made a series of questionable decisions when it comes to traversal. Your bike is basically the game’s second character, and Bend wants you to bond with it (?!) by continually refueling and repairing it. The problem is, it seems to be made of paper and burns petrol faster than a jet engine; you’ll find yourself maintaining your bike this once every five minutes if you decide to take it on the open road. Bend is totally aware of how much fuel you actually burn through — one of the camps’ mechanics actually rubs it in your face, essentially breaking the fourth wall to comment on the sheer amounts of petrol you require. I hated biking around so much I became wholly dependent on fast travel to get to point A to point B.

Don’t get me wrong, though — fast travel hasn’t been done well either. You’ll unlock fast travel hubs as you progress, but you’ll also need to clear out infestation zones around the map to be able to use them; if an infestation lies between the direct line you’ll fast travel through, you won’t be able to use it. You can get around this by fast travelling the long way ’round, manually directing Deacon to points unaffected. In short, you can easily game the fast travel mechanism, but doing so is tedious and frankly silly.

If you do decide to drive in the end you’ll constantly need gas; ironically, fast travel makes this tactic easy as well. You can simply teleport to one of the many spots you’ll eventually map out in your head, taking advantage of constantly respawning, static resources. Guaranteed, a gas can will always spawn inside your home base, and there’ll also be cans on the backs of tow trucks near each NERO checkpoint. The trick isn’t limited to gas, though, as kerosene, rags, medicine and more will respawn in locations without fail. When I had to eliminate nests or face hordes I used all the tools in my arsenal, then fast traveled back to base to collect respawning resources before returning and finishing the task at hand. Yawn. 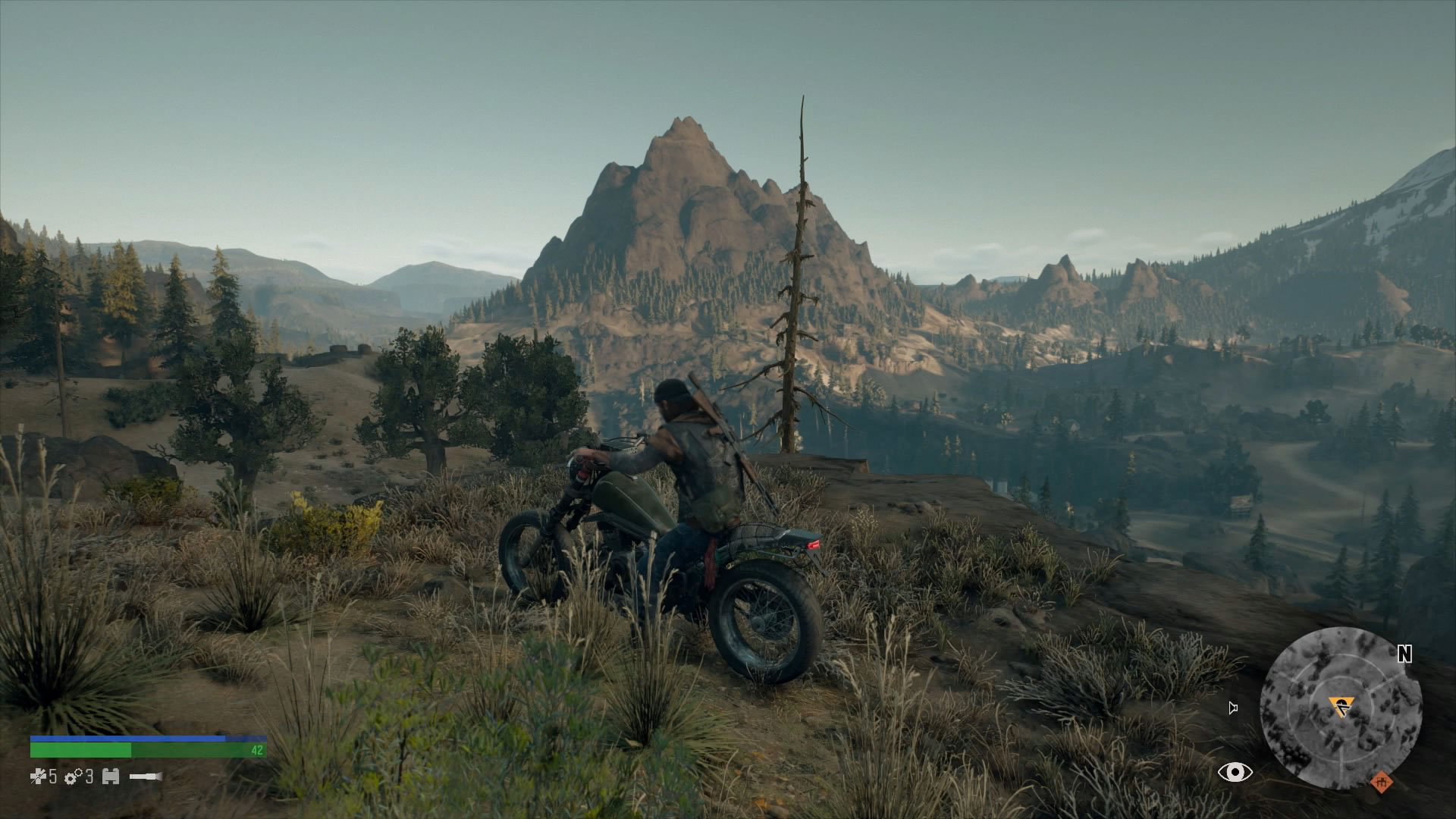 It’s probably here that I should mention Days Gone’s crafting system is unnecessary; Bend should have just put the finished products out in the world so I didn’t have to needlessly run around an environment mashing the Square button to pick everything up. If the crafting system is supposed to elicit some sense of desperation and enforce realism, it fails. That notion of realism is ruined when you realise both ambush camp baddies and freakers alike can run through trip wires without setting them off. It’s also annoying that hordes — introduced WAY too late in the mix, by the way — seem to be programmed to stop you from leading them into a camp or into a pack of wolves or a bear to help to reduce their numbers.

This sordid state of affairs leads me to believe that Days Gone was either rushed out by Sony to fill a gap in releases and buy time for the likes of The Last of Us Part 2 or that Bend Studio, a veteran of PSP and PS Vita titles, simply cannot develop for a bona fide console. Either way, that’s disappointing.On the side of the rush job argument, flashback scenes between Deacon and his wife Sarah play out strangely. Weird fade in, fade out moments lead me to believe that Bend was planning to lean on the events leading up to the apocalypse — of Deacon and Sarah’s initial struggles at survival — before we got to the open world of Oregon itself. I honestly think we were initially meant to play through some of those events before they were scrapped and relegated to cutscene material. Worse yet, I think I would have enjoyed those moments over the finished product.

Deacon, his mate Boozer and the remaining inhabitants of Oregon have decent stories to tell (when they’re not padded with filler quests, that is). When bugs aren’t present, things generally flow pretty well, keeping my claim that this is State of Decay with a budget an accurate one. The big problem is, the current state of affairs means Days Gone practically goes out of its way to hamper enjoyment; unoriginal yet decent systems are continually hampered by a lack of polish quite uncommon in Sony first-party titles. At the eve of PS5 near-announcements, it’s sad to see Sony’s powerhouse console finish up on a sour note such as this. While patches may be able to salvage quite a few of its bugs, there are some questionable design decisions that certainly can’t be fixed as easily. 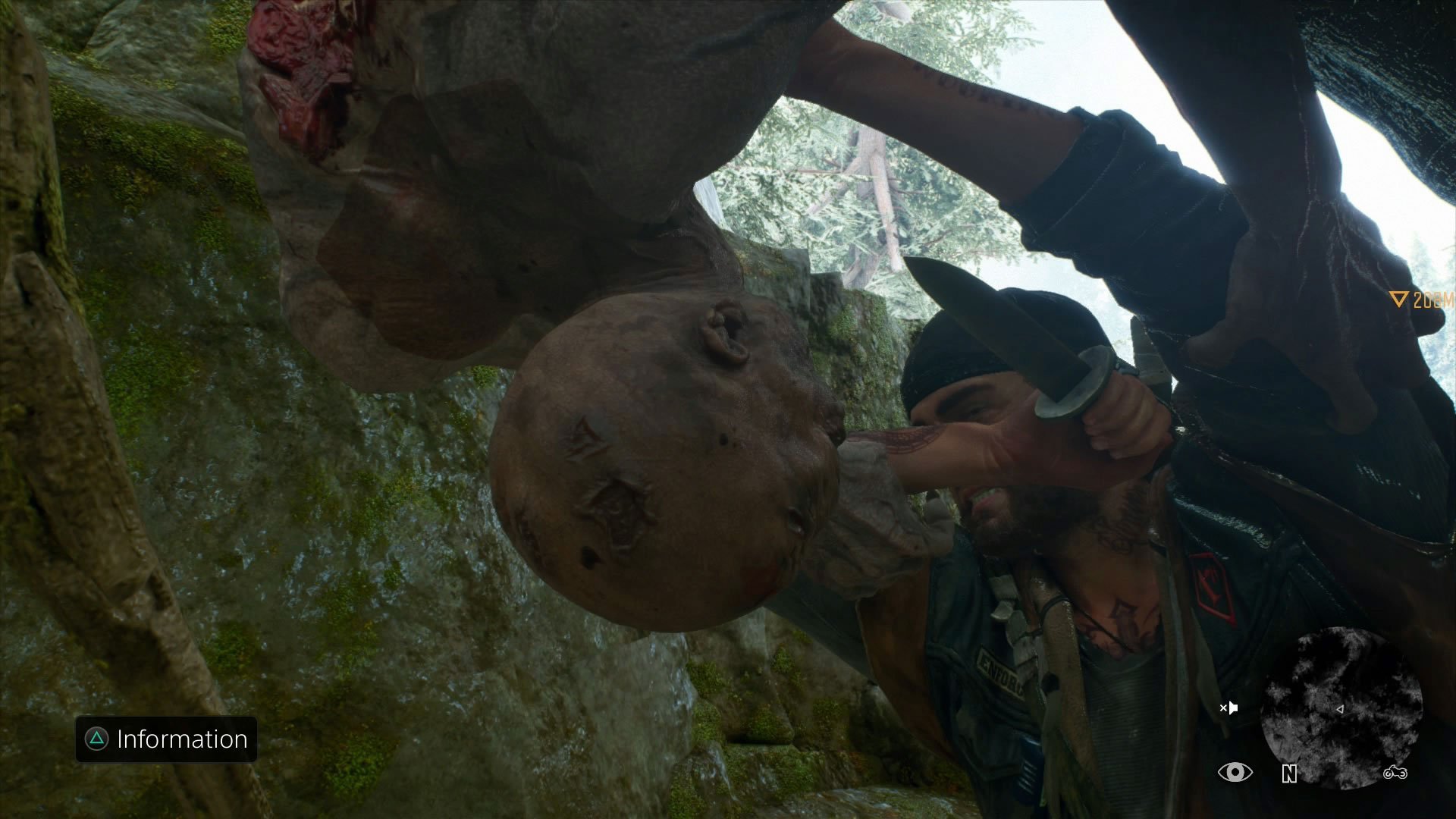 Days Gone was reviewed using a promotional code on PS4, as provided by the publisher. Click here to learn more about Stevivor’s scoring scale.