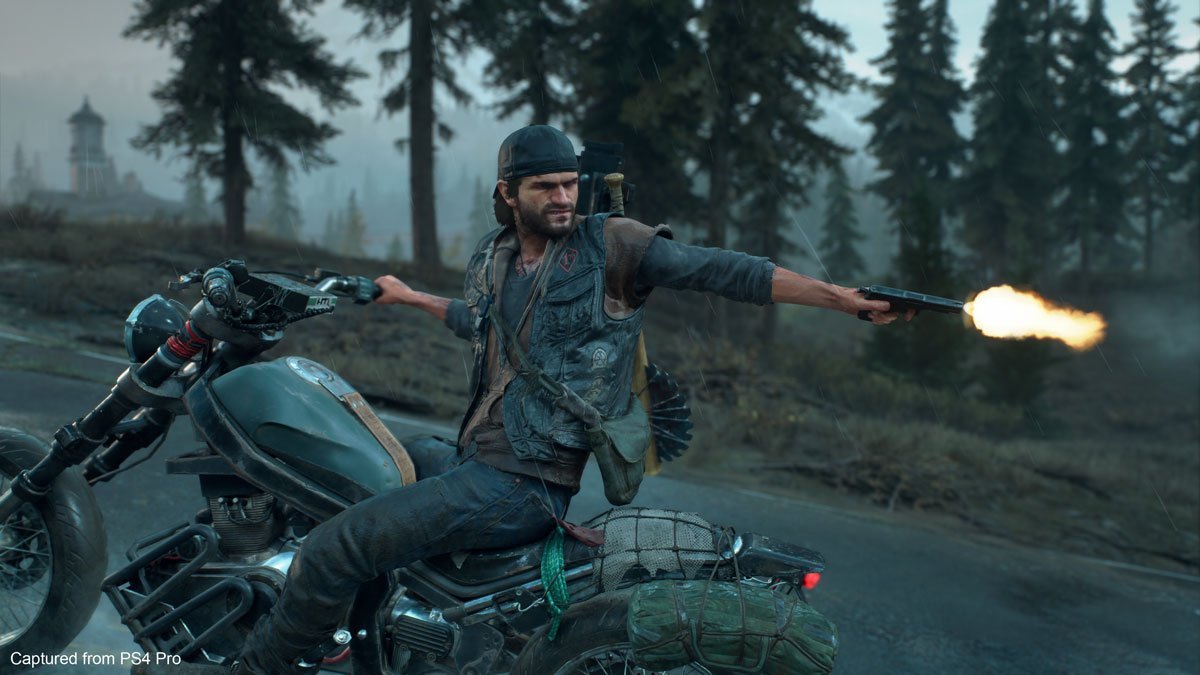 Has Sony Bend bitten off more than it can chew?

My recent afternoon with Days Gone was split down the middle thanks to an interview with Sony Bend’s Emmanuel Roth and literally served me two versions of the game: a tightly-scripted linear experience and one deeply rooted in an open world where I was in control of its pace. I have to admit that I much preferred the former over the latter.

Before we get into that, let’s step back a moment and detail Days Gone for those in the dark. In development for the last six years, we got our first glimpse of the post-apocalyptic game back at E3 2016. Days Gone stars Deacon St. John, a tattooed biker doing his best to survive in the Oregonian wilderness. From atop his trusty motorcycle, St. John does his best to make it through each day, though he clearly spends most of that same time thinking of his wife Sarah. As with any recent post-apocalyptic game, St. John needs to protect himself from freakers — basically, zombies — and hardened human survivors who will do anything to stay alive themselves.

From its rather short initial introduction to a ten minute extended gameplay video that followed, I mistakenly thought the game would play rather similarly to The Last of Us. This is true in the beginning; during Days Gone‘s prologue is when I connected with the game the most. A rather linear narrative experience introduced me not only to Deacon and his wife but to Deacon’s bikie gang brother Boozer, human enemies the Rippers and the state of the world itself after it fell to the hungry hands (and teeth) of the freakers themselves. Moving from encounter to encounter, with flashbacks featuring Sarah in between, I found myself thralled with what was being presented.

I was pulled from that need by local handlers who informed me it was time for my interview time with Roth; there, I mistakenly starting off by saying I’d heard the game was getting a lot of comparisons to State of Decay that I really couldn’t see myself. It was rather ironic then that fifteen minutes later, after the interview and back at a console playing the open world section of Days Gone, I totally got it. To say that Days Gone is like State of Decay though is doing Sony Bend’s latest a disservice: put better, Days Gone is like State of Decay but with a far bigger budget behind it.

As I fast-forwarded several hours past the prologue, I ultimately felt like I was playing a different game altogether. In this new setting, Deacon was on his own, tethered to supporting characters like Boozer through a walkie talkie. With my motorcycle gassed up and ready to go, I made it mere metres before I was informed I’d driven near a freakers’ nest and was tasked to eliminate it to reduce the enemy presence in the area. Sure, things were fluid and looked way better than anything Undead Labs has offered up to date, but mechanics at this point were nearly 1:1.

After crafting a molotov cocktail and lobbing it into the nest — standing ready with shotgun in hand to decapitate the stragglers that managed to run out of the nest before it was fully engulfed in flames — I jumped back on my motorcycle and proceeded to drive straight into a giant rock. Picking myself up from the collision, I found that my ride had been damaged in the wreck; in addition to sourcing scrap to keep it in running condition, I was also informed I’d need to find fuel to keep it gassed up too. Resource management and crafting; check and check.

The one thing that makes Days Gone stand apart is its somewhat bizarre choice to include a zombified child as an enemy type. Called the newt, the enemy looks like a child and can be beaten with a baseball bat or even shot in the face with a shotgun. As they’ll attack you in packs, you can’t really get around the fact that you’ll eventually be killing a childlike enemy at some stage in your playthrough, so best make peace with that now.

At any rate, I used the menu system to get back onto the main questline and took off towards it, doing my best to put blinders on ignoring nests, historical markers-slash-collectibles and survivors that begged me for help along the way (sorry, dudes — I was on the clock). As I moved from mission area to mission area, using stealth to sneak around lone zombies and a shotgun to clear groups, things quickly started to feel isolated and empty. While the surrounding world was rich with detail and story hooks were being thrown left, right and centre, something was missing. I found myself pining for the structure I’d encountered when I first started Days Gone. While doing this, I walked a little too far from a gas station and was instantly assailed by warnings I was leaving a mission area.

From what I’ve seen, there’s a real conflict between wanting to tell a highly impactful and emotional story like that seen in Uncharted and The Last of Us and giving the player the freedom to do as he or she pleases in an open world epic. While titles like God of War were able to marry these two worlds together, Days Gone didn’t hit that sweet for me in the short time I had with it. Worst case scenario though, I get a better version of State of Decay, a franchise I clearly enjoy. Expectations somewhat in check, I’m now more than ready to continue Deacon St. John’s adventure when Days Gone heads to PS4 on 26 April.