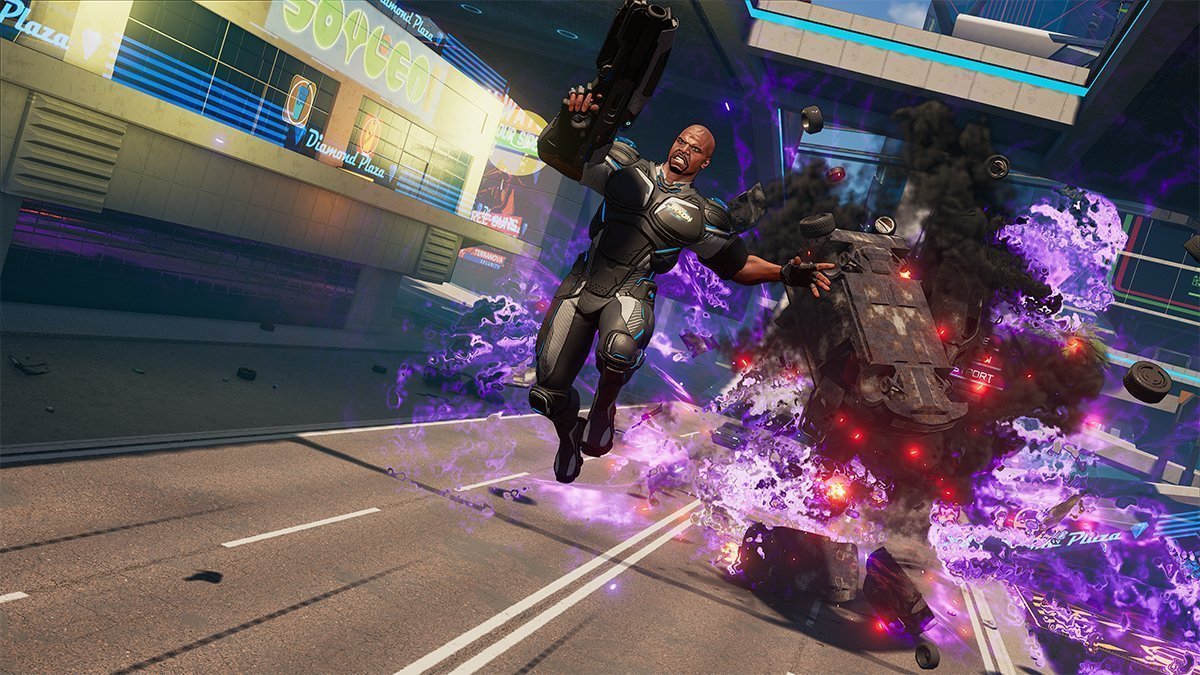 Crackdown 3 Review: The Agent should have stayed dead

A game that's a decade too late.

First announced at E3 in 2014, Crackdown 3 was originally slated to be released two years later. That wasn’t to be; since then it has been pushed back multiple times over the course of its development. Previews over the years showcased grand-scale destructible environments that used the power of cloud computing to level buildings into piles of rubble. It was admittedly impressive technology, but as Xbox One moved away from an always online console, we haven’t seen other titles attempt to even replicate anything like it on the platform.

As Crackdown 3 finally rolls out its red carpet to the world, Azure-fuelled destructibility has since been isolated for multiplayer — quite literally, as Crackdown 3‘s campaign and multiplayer have been split into separate downloads. Given a single, viable window of two hours to check out multiplayer, we’re weren’t able to judge how it will play. Instead, we turned our attention to the campaign, and ultimately have found that what’s left is a game that feels outdated. This is a game that hasn’t made any significant advancements in its gameplay since Crackdown 2 launched nearly a decade ago.

Set ten years after its predecessor, Crackdown 3 takes place in a fictional city called New Providence which has been overrun by a terrorist organisation known as Terra Nova. The Agency decides to send you, a highly skilled super agent with remarkable abilities, in to overturn the issue. You’re given the option at the start to select which Agent you would like to play with, though the obvious correct choice here is to pick Terry Crews. This way, repetitive dialogue is at least somewhat amusing thanks Crews’ straight up enthusiasm.

In this third-person action shooter, you’ll traverse an open world completing missions and collecting orbs as you go along — and boy, are there a lot of orbs to get. Your character’s skills are split across a number of categories which includes Agility, Strength, Firearms, Explosives and Driving. Once you’ve collected enough orbs tied to a specific skill, you’ll level it up and unlock bonuses which can help you progress through the game. For example, progressing in Agility levels allows you to jump higher, chain double jumps, or dash while in the air.

The system works well because the game serves up missions that will require you to have some of these upgrades in order to complete them. Your end goal is to work your way to the big bad figurehead overseeing Terra Nova in New Providence, but along the way you’ll have to go through a bunch of smaller bosses that run some of the infrastructure in the city. After you regain control of these services and start to liberate the land, it will make your run to the end a lot smoother. The problem though is that there just isn’t a lot to do in Crackdown 3, and the missions you’re given become very repetitive within the first few hours.

My playthrough lasted around 10 hours as i unhinged Terra Nova’s grip on the city. After that you can continue exploring and collecting more orbs; but there isn’t much point to that if you’ve done all the missions – alternatively you can try using a different agent to replay the game. That doesn’t offer up much variety though with the agents being relatively the same, except for offering a small percentage bonus to some of the orbs you find.

Apart from the lack of content, my biggest gripe with Crackdown 3 is the way it handles combat, a big focus of what you do. It uses the same mechanics from previous games — you have one button to aim which automatically locks onto enemies and then another button to fire your weapon. Holding the aim button down tracks the enemy as they, or you, move around the environment — and strangely even through walls if you find one between you both. Because of the way auto targeting works it’s way too easy to flick between enemies as you swiftly remove them from the fight.

I think developer Sumo Digital has the right idea with push-forward combat, where you restore parts of your shield every time you dispose of someone; it keeps you in the fight if you’re taking damage. But there is hardly any challenge to that combat considering most enemies die quite quickly and you can then almost instantly switch to a new target. It’s a shame because there’s a decent range of weapons to experiment with — it’s just that everything seems ridiculously overpowered.

Crackdown 3 feels too similar to the game that came before it; it’s like Sumo has made Crackdown 2 again, ignoring everything it could have learned from the last decade of open world titles. Its campaign is brief, with repetitive missions structures that you’ll mostly see inside of the first hour. The incentive to replay the game with different Agents is practically non-existent.

Fans of the Crackdown series might enjoy this latest instalment, but even then, they shouldn’t expect much more from what they’ve already played before. Then again, fans of the franchise — like me — may walk away from this experience quite disappointed. When the end credits did start to roll, I was shocked things were over so quickly, but ultimately, happier it was all over.

Crackdown 3‘s multiplayer component, Wrecking Zone, feels like a different game. That’s largely because it is — it’s been developed by a different studio than the campaign and relies heavily on Azure-based, cloud-powered destruction. That singular attribute makes the mode enjoyable for a brief stint, but when the rubble falls away, you’re left facing two truths: there’s no progression across Wrecking Zone’s two total modes, and there’s no way to currently join a match in a pre-made Xbox Party. What is this, 2009? Oh…

Crackdown 3 is available now Windows PC and Xbox One, part of the Xbox Game Pass and Xbox Play Anywhere programs.

Crackdown 3 was reviewed using a promotional code on Windows PC, as provided by the publisher. Click here to learn more about Stevivor’s scoring scale.