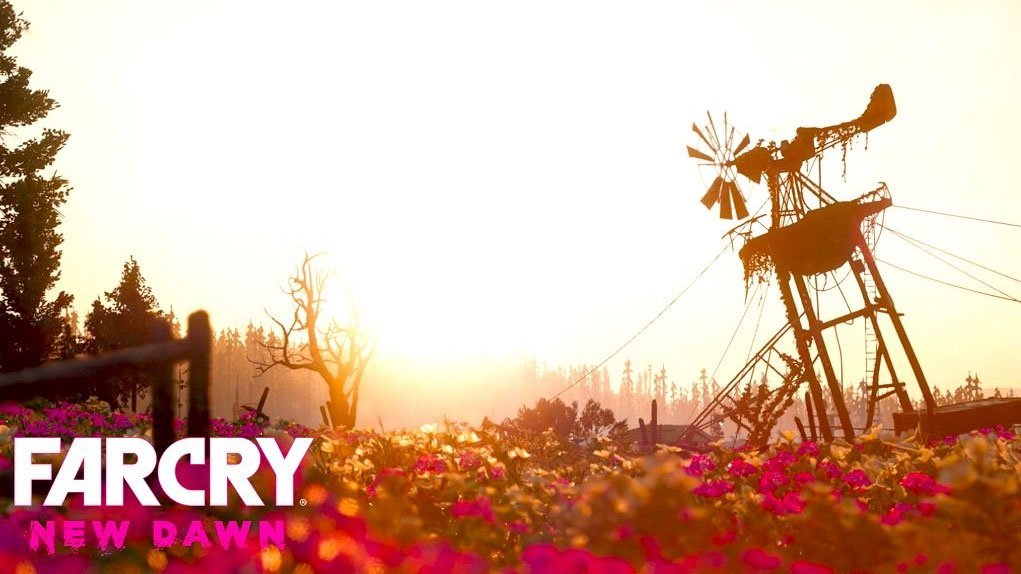 For (almost) every Far Cry game, there’s a spin-off. It’s just expected now.Instincts, way back in 2005, was also a winner with the introduction of superhuman feral abilities that had you running at cheetah like speed and leaping across chasms with a single bound. As a fan of 80s action flicks, 2013’s Blood Dragon was nothing short of a standout masterpiece for me. The latest, 2016’s Primal, took a calculated risk in excluding a larger than life villain which has been a staple of the series for years. You’d be forgiven for feeling a little apprehensive about what New Dawn will bring to the table considering that, narratively speaking, this is a sequel to Far Cry 5. Call it Far Cry 5.2 if you like.

While the core gameplay of stealth, gun fights and hunting remains largely the same as previous games, some RPG-like elements have been sprinkled over the top of New Dawn to control the pacing of what is a much more concentrated Far Cry experience when compared to 5.

Where Far Cry 5 left the player to their own devices, encouraging you to search and explore for both main story missions and side quests, New Dawn has a clear, mainline of missions delivered right to your door. Side quests are thrown in to divert your attention and flesh things out as you’d expect, and while hunting is possible and searching bunkers have also been included, these points of interest are far from the focus of the gameplay loop.

In New Dawn, everything leads back to Prosperity, your home base of operations and a barracks for the rebellion against new villains Micky, Lou and their Highwaymen goons. It’s your primary source for weapons, ammo, and the like and it’s Prosperity that you’ll be focused on levelling up, not your character, as you push through the campaign.Prosperity is broken down into various departments: weapons, vehicles and cartography, to name a few. Each department needs to be upgraded to grant you access to better weapons, vehicles and maps.

Using the weapons bench instantly provides access to 12 Level 1 weapons ranging from pistols to sniper rifles to suit your preferred play style. Though Level 1 weapons are only useful when going up against Level 1 enemies. Unlike previous games, you can’t just buy scopes and silencers to customise your weapons — after all, it’s the post-apocalypse; there aren’t any gun stores operating. Instead, silencers are fashioned from old aerosol cans literally bolted on to weapon barrels. Bayonets are screwdrivers and kitchen knives held on with electrical tape. Due to their makeshift nature, instead of adding attachments to weapons, upgrading the weapons bench to Level 2 will unlock a new array of weaponry which of course have better properties and features.

This RPG element blocks your immediate access to better weapons; this is closely tied in with the enemies that you’ll come up against throughout the game. As mentioned above, Level 1 weapons will do the trick against Level 1 enemies. But level 2 enemies are clad with basic armour so, while you could take out a few higher-rated goons with low rate weapons, a whole outpost of Level 2s will be too challenging so upgrading is a necessity. Like weapons (and other resources and tools), enemies are classed from Level 1 through 4, with the top tier labelled as Elites who are super challenging to take down unless you’ve got the gear to match.

After the bombs dropped on Hope County, much of civilisation was left in ruins, including the local economy. Money is a thing of the past and people now trade in resources. As you explore the map you’ll gather resources of all kinds to trade for weapons, ammo and vehicles, or crafting things such as explosives and medications. Though no resource is as precious as the almighty ethanol. This is what’s used to upgrade the various work benches in Prosperity, thus unlocking new gear. As Far Cry veterans may expect, the best source of ethanol is enemy outposts.

A staple of the Far Cry series, outposts were previously a once off affair. Go in, take care of all the enemies however you see fit (as if there’s any other way than with cat like stealth), thus making the surrounding area safer. To be honest, as fun as these outposts are, it was beginning to become a bit of a stale component of the series; after completing all the outposts and eliminating all the cultists in Far Cry 5, its map suddenly became too empty and peaceful to be fun.

New Dawn breathes some new life into outposts with the ability to choose between holding onto one — which keeps the highwaymen at bay — or scavenging it for everything it has left to offer. Doing the latter grants extra ethanol to put towards Prosperity upgrades but also results in the Highwaymen retaking control over it. Outposts can be scavenged multiple times but with each occasion the Highwaymen return with more security, more goons, more firepower and thus significantly more challenge. Effectively a scavenged outpost is levelled up the next time around; with a greater challenge comes greater rewards. The opportunity to extract more ethanol the second, third or fourth time around is enough encouragement to keep scavenging though remember, to get better weapons you need ethanol, but to get more ethanol you need better weapons. It’s a clever gameplay loop in theory.

Unfortunately though this brings to light a clear attempt at extending the length of time you’ll spend in New Dawn. On two very obvious occasions during the campaign, progress comes to a grinding halt until you’ve upgraded Prosperity to a certain point. This essentially forces you to go searching for new outposts to raid as scavenging upgraded outposts you’ve already taken is simply too difficult if you don’t have access to necessary weapons. Perhaps, like me, you’ve evenly spread out your Prosperity upgrades or focused on upgrading any one aspect of it in particular that’s not the weapons bench. Being forced to overrun more outposts in order to progress the campaign added on what felt like an unnecessary 3 hours to my playthrough and it made me feel like a sucker.

Yet another aspect of Prosperity that relies upon ethanol is the tacked on expedition missions. These trips off the map and out to new areas have you sneaking into an enemy base in search of a package. Do so undetected and you’ll have 30 seconds before a GPS tracker is triggered and highwaymen relentlessly come after you. If you take the package to the extraction point and stay alive while you wait for pickup, you’ll be rewarded with more crafting resources. While fun to do once or twice, these expeditions are in no way related to the campaign and as stated, are as tacked on as multiplayer in a Tomb Raider game.

There is some redemption for New Dawn though. Firstly, guns (and fangs) for hire are back and have improved significantly since their introduction in FC5. They were previously known to stupidly run into the sightline of otherwise unaware enemies alerting them to your presence or they would just die too easily when bullets start flying, making them a hindrance rather than an asset. They now behave exactly as they should.

Primarily, I travelled with the trusty K9 companion Timber who tags enemies (plus alarms and resources once he’s levelled up enough) without being detected. He’s tough, capable of taking out even elite levelled enemies and on the occasions where he does succumb to injuries, his usefulness in a firefight makes reviving him a worthwhile task rather than an annoyance. The fact that he’ll now sit next to you in the car and sometimes stick his head out the window to feel the breeze makes him the best companion of the roster.

Despite changes to the formula, New Dawn is still very much Far Cry at its core. It includes everything we love about the series, fixes what few issues the previous game had and exploring the beautiful wilderness in super bloom — which looks amazing on Xbox One X — is as fun as it’s always been. Stumbling across familiar areas which now lie in ruins brings back memories of the previous game as do the various notes and letters found around the place which allude to what became of many old characters. While hindered by a few rock solid progress walls that would give Trump a boner, the narrative will keep your attention even though it’s much shorter, and simplified to suit this compressed format.

Micky and Lou thankfully follow the Far Cry formula by being complete psychopaths in their own way, though it’s a shame that the story doesn’t give you much of their back story and deeper motivations. When you finally do come up against them in the finale, it’ll likely be the least fun you’ll have in the entire game (but it’s still worth pushing through to get to the end). There’s a lot to like about Far Cry: New Dawn, though its price point is admittedly not one of those things; if you’ve a backlog, you might want to consider waiting on its price to drop before you dive in.

Far Cry: New Dawn was reviewed using a promotional code on Xbox One X, as provided by the publisher. Click here to learn more about Stevivor’s scoring scale.