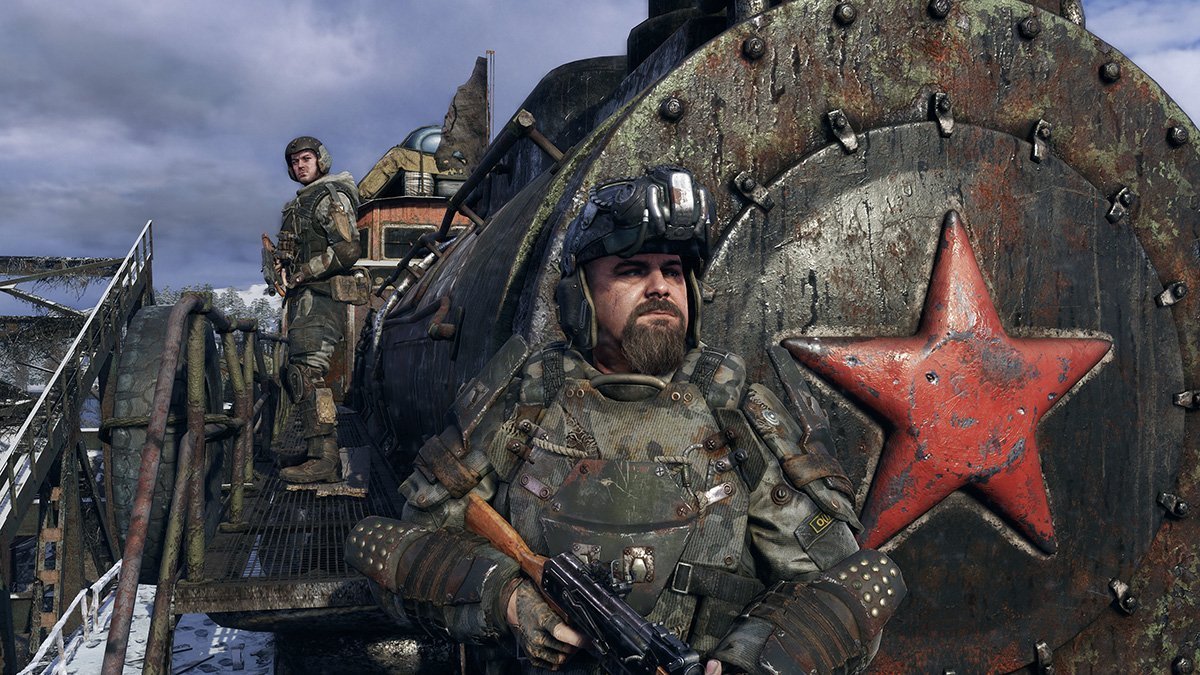 As are the spiders.

Metro Exodus is a game I’ve both looked forward to and completely forgotten. It’s no secret I love a post-apocalyptic world; if it’s an open-world too, all the better. Both Metro 2033 and Metro: Last Light offered a unique twist on the standard nuclear world — rather than being ambiguously or explicitly based in the US, it was in the subterranean labyrinth of Moscow’s metro tunnel system.

Based on Dmitry Glukhovsky’s Metro novel series and following the silent protagonist Artyom, the games offered a cultural flavour to the apocalypse I wasn’t familiar with, even if a lot of the radioactive tropes carried over. Their cramped, claustrophobic levels offered a level of suspense and fear the drifted more to horror than FPS, and it cemented its place as a unique gem among apocalyptic shooters. After two games in the tunnels, Artyom is stepping out into the light for an open-world adventure in greater Russia in Exodus.

After a revelation about the state of the world beyond the tunnels, Artyom and his wife Anna set out into it. Soon finding themselves part of a greater crew, they use the country’s rail network to explore far beyond the environment they — and previous Metro series players — ever knew. What follows is a far more varied game than its predecessors could ever offer. Exodus guides players through several enticing open-area maps, filled with minor distractions and areas of interest to explore.

While the inventively designed map — a moving, transparent compass balanced on a paper map that moves and rotates in real time — will always guide you to the next major story beat, there are plenty of side areas, nooks and crannies to investigate in each zone. Some contain puzzles, enemy encounters, or drips of world-building story in the form of notes and cassette tapes left scattered across the map, but all contain the game’s hottest commodity: loot.

With the introduction of a surprisingly robust crafting system, Metro Exodus adds a new yet familiar layer to its gameplay. Crafting is split between on-the-fly recipes like throwable weapons, medkits and decoys and homebase-only options like crafting ammo, cleaning your weapons and repairing combat-induced cracks on your gas mask. On-the-fly crafting is a godsend, helping you survive in the hostile open world, while homebase crafting has a dramatic impact on the in-game economy.

The Metro series has always played with limited ammunition as a story-driven mechanic, with ammo both used for combat and as a currency. Limiting your shots in a Metro 2033 or Last Light level meant you might be able to upgrade to a better weapon for the next. As ammunition has been phased out as currency in Exodus, the ability to craft it at your homebases shifts the conversation to deciding to allocate resources towards bullets or rations (but usually, not both). Given players can choose to tackle the world in all different orders or skip sections entirely, it’s rather nice to be spoilt for choice.

Being able to craft ammo is even more important as your melee attacks seem to be as weak as a kitten. Honestly, why does it take one bump on the head to eliminate a human enemy, but seven or eight to take out one of the swarming, zombie-like Humanimals? These encounters are where you’re most likely to waste your shots in the scramble, so bashing your way out in the worst-case scenario shouldn’t feel like such an insurmountable chore. Thankfully, your guns are a lot of fun while they’re still firing.

Customisable weapons mean you can tweak each of the game’s variety of weaponry to suit your needs and play style. Like your shotguns? Why not add more barrels. Prefer to spray ’n pray? Add a larger magazine to your rifle. Need to take down giant spiders in a pitch-black, underground area full of claustrophobic corners? Add a night-vision scope. Or do what I almost did, and uninstall the game as soon as that level begins. Honestly? Unseeable spider hordes chittering at me for an entire level, 4A Games? You almost lost me then and there.

While I’m not overly proud of screaming, “ick, ick, ick, let it be over soon” throughout that level, my shrieks are a testament to 4A’s sound design. Enemies may not always be visible, but you can always hear them. You’ll know it’s almost zombie time when you hear moaning out of the corner of your ear, or a Demon’s huge wings flapping before it dives at you, or the scurrying of far too many legs in the dark when– nope, not going there again.

All in all, Metro Exodus feels like a solid simulacrum of someone else trying to make a Fallout game, for all the benefits and drawbacks that entails. Its maps are fun to explore, and effort has been put into making the side areas rewarding in both narrative expansion and bonus upgrades to your gear. That said, Exodus doesn’t have the same handle on ambient storytelling and visual interest to drive you to investigate every corner of the map.

Most of the time, the only interactive elements in the world are doors, or containers that contain generic crafting materials. While there is flavour to the main story, it’s mostly about pulling you from A to B, foxhole to action sequence. I definitely enjoyed myself in this Soviet-flavoured variety of Armageddon, but I’m not certain the story of Metro Exodus will stick with me for long. Nonetheless, it was very enjoyable to fire a shotgun-shell pistol and listen to accent-heavy radio chatter; it’s a bit sad to say “do svidaniya” to the Metro franchise once again.

Metro Exodus was reviewed using a promotional code on PS4, as provided by the publisher. Click here to learn more about Stevivor’s scoring scale.